Adenoid tissue regression usually occurs at adolescence; however it may persist in adults causing significant nasal obstruction and histopathological examination is required to preclude the possibility of malignancy [1,3,4].

Benign lesions in the nasopharynx of adults also include cystic lesions such as branchial cleft cyst, Tornwaldt cyst and mucous retention cyst [5,6].

In this study we identify the various pathological entities detected in adult patients presented to our department with a nasopharyngeal swelling with analysis of the associated clinical and demographic data.

This is a prospective study of adult population (starting from 18years) undergoing endoscopic guided nasopharyngeal biopsy to exclude nasopharyngeal malignancy from October 2014 to September 2016 in our tertiary referral center. Institutional review board approval was obtained. All patients included in the current study presented to our outpatient clinic with nasopharyngeal masses. All cases of antrochoanal polyps and angiofibroma were excluded from the study. Demographic data (Age, gender, smoking status), clinical picture (presenting symptoms and signs) and clinical findings on nasopharyngeal endoscopy were recorded. Nasopharyngeal biopsies were obtained under general anesthesia. A 4 mm rigid endoscope was introduced through the inferior meatus till clearly visualizing the nasopharynx. A good view of the nasal cavity and the nasopharynx was possible in all cases and biopsy was performed using a punch forceps. Pathology reports were reviewed for biopsy results. Descriptive analysis was used for frequencies and means. Analysis was conducted using SPSS (SPSS Inc, Chicago, IL) and a p value <0.05 was considered significant (Figures 1 and 2). 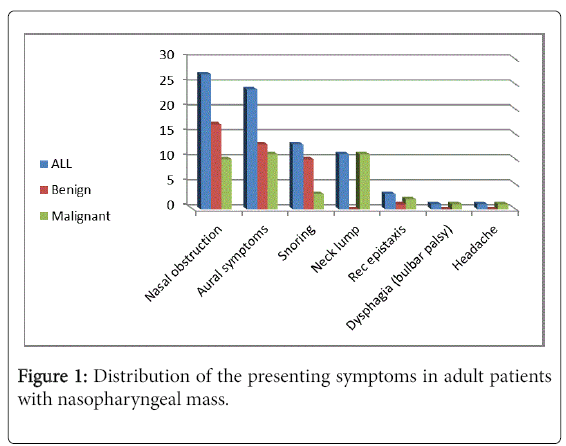 Figure 1: Distribution of the presenting symptoms in adult patients with nasopharyngeal mass. 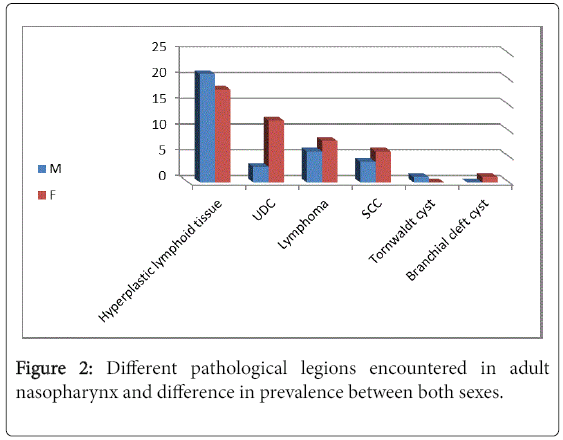 Figure 2: Different pathological legions encountered in adult nasopharynx and difference in prevalence between both sexes.

Institutional review board approval was obtained from ethical committee at Sohag University, Egypt.

All study population were consented for participation in the study.

Table 1: Illustrates the numbers and percentages of different pathological nasopharyngeal lesions in the whole study population and numbers in each sex group.

Table 2: Illustrates the distribution of patient main complaints in the whole study population and separately in malignant and benign lesions.

The duration of complaint ranged from six months to six years at time of presentation for benign lesions and from one month to one year in malignant lesions.

There was no significant data regarding patient's jobs, or their residence.

The symptoms associated with nasopharyngeal malignancy are often vague and non specific which causes late diagnosis of the disease usually in an advanced stage [7]. Nasopharyngeal malignancy may be confused with enlarged nasopharyngeal lymphoid tissue in adults. The cause of adenoid hypertrophy in adults is not clearly understood; many factors are blamed including viral or bacterial infection with reactive lymphoid hyperplasia and external irritants such as dust, smoking and allergic disorders [1].

Routine nasopharyngeal endoscopic examination is not reliable to distinguish between malignant lesions and adenoid tissue in adults, the standard medical practice is to biopsy nasopharyngeal masses for histopathological examination [1,7].

In this study malignant nasopharyngeal diseases constituted 48.75 % of the group population which is markedly more than the percentage reported in other recent studies [8,9].

The hypertrophy of nasopharyngeal lymphoid tissue is reported in the first 4 years of life and its involution usually happens by the age of 6 to 16 years [10]. The reported aetiopathogenetic factors responsible for adenoid hypertrophy in adults included persistence of childhood adenoids due to chronic inflammation or re-growth of involuted adenoidal tissue as a result of irritants, infections or smoking. Studies also reported viral infection in immunocompromised patients particularly HIV infection or after organ transplantation [1,11].

The importance of age in assessing nasopharyngeal masses cannot be denied as malignant diseases usually develop later in life while benign masses are usually identified at a younger age. In our study, the mean age of adult patients with benign disease was 45.08 ± 15.6 years, while that of patients with malignant disease was 49.51 ± 12.06 years; this difference was significant (p<0.001). Meanwhile we should not forget that malignant nasopharyngeal disease was detected at young age of 21 years.

In this study we found no significant sex difference as regard adult adenoid hypertrophy, also any significant effect of smoking or immunodeficiency was not observed. We found important gender difference as regard development of malignant tumors where the male to female ratio was 2:1 however in patients with benign pathology the male to female ratio was 1:1.15.

The presence of a mass in the nasopharynx of an adult raises the suspicion for malignant disease; the coincidence of unilateral secretory otitis media is another warning sign for ruling out nasopharyngeal cancer [11].

The complaint of nasal obstruction and snoring was significantly higher in patients with benign lesions (21.25% and 16.25%, respectively) than in patients with malignant lesions (12.5% and 3.75%). The most common presentation in malignant group was neck lump and aural symptoms followed by nasal obstruction. Our results are in accordance to the literature evidence that unilateral OME increases suspicion for nasopharyngeal malignancy and the necessity of nasopharyngeal biopsy in those patients [12].

Benign lesions are more commonly detected in the nasopharynx in adult population particularly hyperplastic lymphoid tissue. Histopathological examination of nasopharyngeal mass is very essential to rule out malignancy which is not uncommon.

Copyright: © 2017 El-Taher M, et al. This is an open-access article distributed under the terms of the Creative Commons Attribution License, which permits unrestricted use, distributionand reproduction in any medium, provided the original author and source are credited.