Background: After observed widespread use of ertapenem at four community hospitals, antimicrobial stewardship initiatives (ASIs) were undertaken to minimize ertapenem use. Our objective was to evaluate the impact of ASIs on antibiotic utilization and Pseudomonas aeruginosa and Enterobacteriaceae susceptibility patterns.

Conclusion: This multilevel ASI aimed at minimizing ertapenem utilization resulted in substantial declined use. Susceptibilities of P. aeruginosa and Enterobacteriaceae isolates to group 2 carbapenems remained stable in the post-intervention period.

Antimicrobial resistance is one of the largest healthcare threats in the United States, with roughly 2,000,000 illnesses and 23,000 deaths due to resistant pathogens each year [1]. In 2011, U.S. antibiotic resistance resulted in $20 billion in excess healthcare expenditures, $35 billion in societal costs, and 8 million excess hospital days [2]. In addition to facing increased costs and duration of hospitalization, patients with resistant infections may undergo treatment with more toxic agents, including those with limited efficacy data to support optimal outcomes. While the number of resistant organisms continues to grow, the number of antimicrobial agents in development has declined, bolstering the argument for more responsible antimicrobial usage and infection prevention strategies.

Although antibiotics are among the most frequently prescribed drugs, therapy is not optimized in as much as 50% of the time, increasing selective pressure and bacterial resistance development [1]. Antimicrobial stewardship programs, which often track antibiotic prescribing trends and assess for optimal use, have demonstrated the ability to improve patient safety, reverse antimicrobial resistance rates, and decrease healthcare expenditures [3-17]. With the urgent threat from carbapenem-resistant organisms, the utilization of carbapenems and other broad-spectrum antibiotics has drawn attention [18]. Ertapenem is an appropriate target for drug use review and stewardship initiatives, given its broad spectrum activity, multiple approved indications, potential impact on collateral resistance, and economic cost.

Ertapenem is a 1β-methyl carbapenem approved for complicated intra-abdominal infections (cIAI), prophylaxis of surgical site infection in elective colorectal surgery, amongst other indications [19-21]. This agent has a broad-spectrum coverage, including activity against extended spectrum beta-lactamase (ESBL) and AmpC producing bacterial pathogens, with evidence supporting carbapenems as superior agents [19-21]. However, it is generally accepted that widespread use of any antibiotic will eventually lead to the development of resistance, supporting the reservation of broad-spectrum, last-line agents [22]. In vitro studies have shown that ertapenem may select for resistant Pseudomonal isolates and lead to cross-resistance to imipenem and meropenem, although this has never been proven in vivo [23-26]. Carbapenem use has been shown to increase the risk of carbapenem-resistant Klebsiella pneumoniae infections in inpatients, further illustrating the need for prudent utilization [27,28].

Many institutions have reported improvement in carbapenem susceptibilities after implementing ASIs to restrict carbapenems as a class; however, the impact of ASIs to decrease ertapenem is not known. After observed widespread prescribing of ertapenem at four community hospitals, antimicrobial stewardship initiatives (ASIs) were undertaken to minimize its use. Our objective was to evaluate the impact of ASIs on antimicrobial use and Pseudomonas aeruginosa and Enterobacteriaceae susceptibility patterns.

In late 2013, a medication use evaluation (MUE) was completed across the Methodist Healthcare System (MHS) to review the use of ertapenem. Results of this MUE showed extensive use of ertapenem in a variety of patient populations from a wide range of prescribers [29]. In January 2014 (Phase I of ASIs), a robust educational initiative was implemented across the four MHS hospitals to minimize ertapenem use and provide awareness of alternatives. Several groups were targeted for the education including hospitalists, emergency medicine physicians, intensivists, multiple surgery groups, and pharmacists.

In June 2014, additional measures to minimize indiscriminate use of ertapenem were implemented including targeted education and removal of ertapenem from all MHS order sets. Physicians who frequently prescribed ertapenem were targeted for further education.  An automated alert was developed within the electronic medical record that would notify the prescribing physicians of appropriate indications for ertapenem use. The ertapenem alert was implemented in July 2014 (Phase II of ASI). Targeted education continued throughout the study period.

Drug consumption data was collected via central mining software (MEDITECH; Westwood, MA). Ertapenem consumption was measured as number of days of therapy (DOT) per 1,000 patient days [30]. To identify other temporal changes to other antimicrobials during the post-implementation phase, consumption data for the following antibiotics were evaluated: ampicillin/sulbactam, aztreonam, cefepime, ceftriaxone, fluoroquinolones, aminoglycosides, and carbapenems. Only antibiotics intended for systemic use were evaluated; antibiotics prescribed as an ophthalmic solution, ointment, irrigation, or enema were not included. DOT were aggregated monthly for all antibiotics at each facility and across all sites.

All isolates were obtained from clinical cultures from January 2014 to July 2015. Only the first isolate per patient per month was included in the analysis. Antimicrobial susceptibility testing was conducted using the VITEK2 system (bioMerieux, Durham, NC). Antimicrobial minimum inhibitory concentrations (MICs) were interpreted according to the Clinical and Laboratory Standards Institute document M100-S14 (2014) [31]. Monthly E. coli and K. pneumoniae susceptibilities to carbapenems were collected to indicate the prevalence of carbapenem-non susceptible Enterobacteriaceae. Carbapenem non-susceptibility in E. coli and K. pneumoniae was defined as isolates for which the imipenem and meropenem MIC was >2 μg/mL or ertapenem MIC was >1 μg/mL [32]. Susceptibilities for P. aeruginosa to meropenem and imipenem were collected. Nonsusceptible rates were measured as the proportion of isolates non-susceptible to carbapenems and incidence density on a monthly basis. The incidence density was calculated as the number of non-susceptible isolates per 10,000 patient days.

Data were summarized by means and compared by Student’s t-test for pre and post intervention groups. Segmented regression analysis for interrupted time series was used to determine the significance of the differences in levels and slopes of ertapenem utilization over time after implementation of the two intervention phases in July 2014. Estimations were made of the change in ertapenem utilization and isolation of carbapenem non-susceptible E. coli, K. pneumoniae, and P. aeruginosa following phase II, the difference between the pre- and post-intervention slopes of the outcome, and the 12 month intervention effect after the intervention. Significance was determined at the 0.05 level, and SPSS 23.0 (IBM Corp, Armonk, NY, USA) was used for all statistical analyses. The Appendix contains detailed description of the model.

Impact of ASIs on ertapenem utilization

Overall ertapenem use declined from 18.3 to 5.1 DOT/1,000 APDs between July 2013 and July 2015. This represented a reduction from 841 doses administered during the first month and 253 doses in the last month of the study period. Among the four participating facilities, Northeast Methodist Hospital experienced the highest reduction in utilization, with a decline from 38.6 to 0.4 DOT/1,000 APDs across the study period. This reduction was followed by Methodist Specialty & Transplant Hospital, Methodist Hospital, and Methodist Metropolitan Hospital with decreased utilization from 26.6 to 9.2, 14.2 to 5.0, and 10.7 to 4.9 DOT/1,000 APDs, respectively.

The mean ertapenem DOT/1,000 APDs declined by approximately 68% compared to the pre-ASI phase I (14.2 vs. 4.6, p<0.001). The implementation of the ASIs was associated with a decline in ertapenem utilization from an already downward trend (Figure 1). While there was an immediate relative level effect (-7%), the rate of decline leveled off in ertapenem utilization by 12 months post-intervention (p=0.04).

Figure 1: Impact of ASI on ertapenem DOT per 1,000 APDs across all sites*. 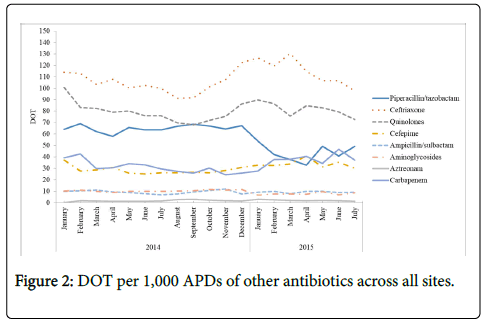 Figure 2: DOT per 1,000 APDs of other antibiotics across all sites. 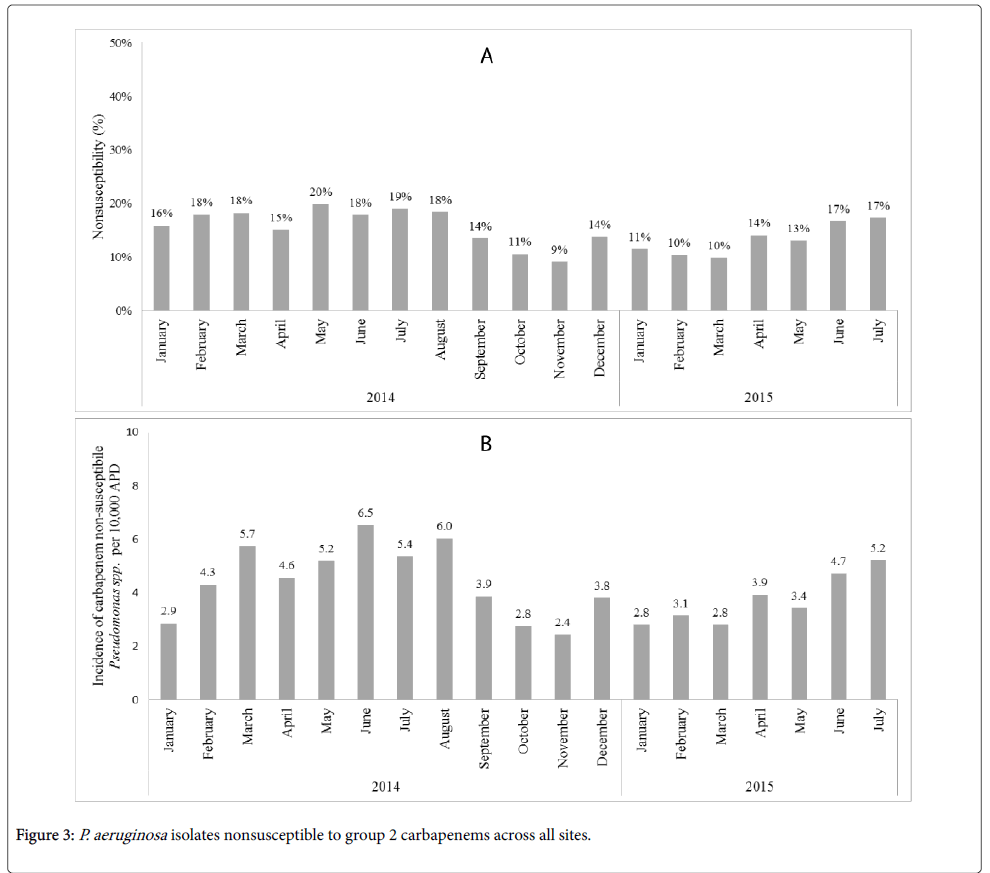 Figure 4: K. pneumoniae and E. coli nonsusceptible to carbapenems across all sites.

Targeted ASI and restriction of broad-spectrum antimicrobial agents have emerged as important initiatives at many institutions due to the rise of multidrug-resistant Enterobacteriaceae across the United States [33]. We described the short-term ecological results of restriction of ertapenem usage amongst multiple hospitals, specifically focused on E. coli, K. pneumoniae, and Pseudomonas spp. As a result of targeted education, removal of ertapenem from commonly used order sets across four community hospitals and an electronic alert for prescribers, ertapenem usage decreased substantially over the span of the study period of two years.

Previous investigations on the impact of carbapenem restriction have revealed decreased rates of CRE; however, the studies focused primarily on the restriction of group 2 carbapenems, imipenem and meropenem, without measurement of ertapenem [34]. Ertapenem is a carbapenem antibiotic that lacks activity against Pseudomonal isolates, but retains activity against ESBL- and AmpC-producing organisms. It is known that ertapenem’s favorable pharmacokinetics and broad spectrum of activity leads to inappropriate prescribing practices, yet it is unknown whether its restriction results in decreased CRE.

Multiple studies have investigated the impact of ertapenem introduction to the overall hospital ecology, specifically focusing on Pseudomonas spp. [35-37]. In many instances, these investigations reported improved susceptibilities of Enterobacteriaceae and Pseudomonas spp. to other broad-spectrum antimicrobial agents, such as cefepime and piperacillin/tazobactam following the introduction of ertapenem to a hospital formulary. However, none have reported significant changes in carbapenem susceptibility following ertapenem usage alone, with many methodological problems cited in these studies [38-41].

The two-year ASI aimed at decreasing ertapenem utilization in this study revealed a corresponding decrease in the incidence of group-2 carbapenem resistant Pseudomonas spp. in the post-intervention period. Similar to other studies that identified significant decreases in the proportion of carbapenem resistant P. aeruginosa after carbapenem restriction, we observed this decrease with the restriction of ertapenem alone. Previous data regarding ertapenem use and susceptibility to P. aeruginosa have been inconsistent. In a long-term study, despite an increasing use of ertapenem over a 9 year period, no association was found between ertapenem and changes in pseudomonal susceptibility to carbapenems [37]. Other studies have reported an increased susceptibility to imipenem among P. aeruginosa after introduction of ertapenem, presumptively due to decrease in group 2 carbapenems [35,36]. While the present study detected an overall decrease in carbapenem non-susceptible Pseudomonas isolates in the post-intervention period, whether this is a direct impact of ertapenem or through indirect changes in other antimicrobials is unknown. The rates of carbapenem non-susceptible Enterobacteriaceae did not significantly change during the post-implementation period. Together, our findings demonstrate that future initiatives focused on eliminating unnecessary ertapenem usage may not come with untoward ecological consequences. Longer studies are likely needed to identify significant trends.

This study has many limitations. During the study period, multiple national drug shortages affected the supply of many commonly used anti-Pseudomonal antibiotics, such as cefepime and piperacillin/tazobactam. Although this study was performed at four hospitals, there were a limited number of isolates nonsusceptible to carbapenems over the study period, which might have limited the ability to show to identify significant trends in susceptibility patterns. Additionally, the short duration of the study limited the ability to detect any longer-term ecological effects.

In summary, this multilevel ASI aimed at decreasing ertapenem utilization resulted in substantially declined use. Susceptibilities of P. aeruginosa to group 2 carbapenems improved overall while Enterobacteriaceae isolates remained stable in the post-intervention period.

We thank the pharmacy department, infection control, microbiology, and clinical laboratory departments at Methodist Healthcare System in San Antonio for providing data for this study.

Copyright: © 2017 Delgado A, et al. This is an open-access article distributed under the terms of the Creative Commons Attribution License, which permits unrestricted use, distribution, and reproduction in any medium, provided the original author and source are credited.