Impact of Pollutions on Environment and Its Hazards

Copyright: © 2016 Kotasthane T. This is an open-access article distributed under the terms of the Creative Commons Attribution License, which permits unrestricted use, distribution, and reproduction in any medium, provided the original author and source are credited.

Global warming is caused by rising levels of carbon dioxide in the atmosphere that acts as blanket to contain radiated heat and raises overall global temperatures to dangerous levels leading to melting glaciers rising sea levels. Most OECD countries and countries with economies in transition, agreed to control their national anthropogenic emissions and greenhouse gases (CO2, CH4, N2O, HFCS, PFCS and SF6). Environment is complex of so many things (light, temperature, soil, water. Any outer substance or condition which affects living being in any form is factor of its environment. Climate of any region determined by meteorological influences, temperature, wind pressure, etc.

Changes in either mean or variability of climate will have an impact on crop growing conditions, affecting agricultural productivity and the suitability of crops in different agroecological zones (if not the nature of the agroecological zones themselves), potentially creating challenges and opportunities in both socioeconomic and food security terms.

High temperatures can lead to negative impacts such as added heat stress and increased water demand, especially in low- and mid-latitude areas already at risk [1].

Climate change may trigger the proliferation of weeds, pests, and diseases, which have the potential to severely limit crop production.

Changes in precipitation can result in a reduction of water availability for rain fed crops, and alterations of discharge in river systems may lower the reliability of irrigation water supply for irrigated crops.

An increased frequency and intensity of droughts can disrupt agriculture production and may also increase salinity in soils and water, increasing the possibility of irreversible desertification.

• Topographic factors as direction and slope

Energy of sun reaching the earth transformed into thermal mechanical and electrical. The great deal of solar energy absorbed in the atmosphere.

Table 1: Pollutants and their medium.

The water available to plants and animal from soil comes from water reservoir. There occurs an interchange of water between the earth surface and the atmosphere forming the water or hydrologic cycle. Two important events are precipitation and evaporation.

Humidity: It is expressed in terms of relative humidity values. It is the amount of moisture in air as percentage of the amount which air hold at saturation at existing temperature.

Wind factor: It is important ecological factor as it affects plants, along seacoast and at high altitude in mountains. Wind is directly involved in transpiration and cause mechanical damage.

Two basic types of pollutants we recognize are non-degradable and biodegradable. Non degradable are poisonous substance like aluminium cans, mercuric salts, long chain phenolics, DDT. Biodegradable pollutants are agricultural waste and domestic waste that can be decomposed under natural conditions.

The central pollution control board (CPCB) has formulated an air quality standard for different sectors of country. For SO2 Kolkata is most polluted city followed by Delhi, Mumbai, Ahmedabad Kanpur, Hyderabad Chennai, Nagpur and Jaipur. NOX levels ranged from 4 μg/m3 to highest 40 μg/m3. SPM was the highest in Delhi and Kolkata and the lowest in Chennai and Mumbai. The SPM levels in all cities were much above the international levels.

The chief gases are SO2 and NOx. Mathura based petroleum refinery is posing threat to Taj Mahal in Agra and other monuments in Fatehpur Sikri. The consequences of relentlessly increasing road traffic are adverse effects on human health and both the local and global environment (Figure 1). 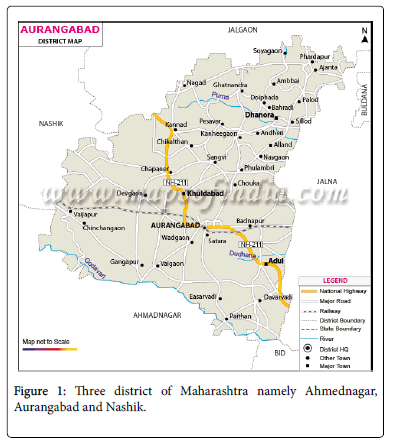 Automobile: All motor vehichle transport produces Carbon Dioxide (CO2) one of the so called “greenhouse gases” that contribute to climate change. Trains are an energy-efficient carrier of people and goods and produce relatively less CO2 emissions. Use of train, cycle and animals reduce emission of greenhouse gases.

The weather of the district is generally hot and dry. Ahmednagar district is known as drought stricken region of the Maharashtra. In 2008-09 the average rainfall of the district was 524 mm. According to statistics, it can be said that the proportion of rainfall was low during the two years of 2007-2009.

The geographical area of the district is 16.68 lakh hectares. In 2004-05 the total area under crop cultivation was 1185846 hectares. The area under multi crop is around 140310 hectares which is 11.16 per cent of the gross cropped area. According to the 1997 agriculture census, the total number of land holders were 681639 who held 1356322 hectares of land. In the Kharif season the food crops like Bajara, Jowar, Paddy, Nachni, Varai, etc. and cereals like Kulith, Mung, Math and oil seeds like Groundnuts and Sunflower are cultivated. Paddy and Nachani are the crops cultivated especially in Akoletehasil. Jowar, Wheat and Gram are the crops of Rabbi Season. In summer season the crops like Groundnut, Corn, Sunflower and Vegetables are cultivated where the irrigation facilities are available. In 2004-05, food crops covered 75.45 per cent and cereals 6.35 per cent of the total irrigated area of 1326156 hectares. The total area under Sugarcane is around 6.12 per cent and area under fruits and vegetables around 2.83 per cent. The area under fodder crops is about 9.26 per cent. Because of the use of organic and bio-fertilizers, the use of chemical fertilizers is reduced by 6.5 per cent in 2008-09 as compare to 2007-08. The agriculture produce is stored in the warehouses of Maharashtra government and co-operative societies particularly available in the northern parts of the district. There are 76 state government warehouses which have the capacity of 49.01 thousand metric ton. The marketing of the agricultural produce is carried out through 14 Agriculture Produce Marketing Committees and 26 Sub-centers of the same located in the districts. Around 1994 sq. km. of the area is covered by forest. The income sources from the forestry are based especially on Sandal wood, Grass, Meditational plants, Curry leaves, Tendu leaves and other ayurvedic plants [5]. Bajra is important crop of the District. However other crops like wheat, paddy and other cereals are also grown in various parts of the District. Paddy is mainly grown in Tribal belt i.e., Igatpuri, Peth, and Surgana Blocks. Vegetables and Onion were main cash crops for last 30 years. Because of variety of vegetables and its supply to Mumbai, the District was known as Backyard of Mumbai. After establishment of sugar factories, Sugarcane has acquired important position in the agriculture economy of the District. One sugar factory under private sector at Ravalgaon and other sugar factories under co-operative sector at Niphad, Ranwad, Palse, Materewadi and Vithewadi are functioning in the District. Economic development in the rural area with speed started only after establishment of sugar factories. The Government has granted permission for starting four sugar factories under private sector as a result of the liberalisation. One sugar factory in private sector has started functioning in Satana Block (Dwarkadhish). This development was however concentrated around the existing sugar factories. Since last 20 years the grape has acquired dominance on the agricultural economy of District. Due to water shortage in Kalwan, Deola, Baglan and Malegaon blocks the farmers have shifted to Pomegranate from sugar cane and grape crops. Some progressive farmers are cultivating flowers in green houses. These developments also indicate that the farmers in the District adopt new technology and methods of cultivation very fast.