Introduction: The expectant mother’s natural body changes will lead the couple to redefine their emotional and sexual life throughout pregnancy.
Objective: Study the influence of sexuality on full term expectant mothers’ labor induction in Parakou.
Methods: It was a cross-sectional, descriptive and analytical study conducted from 15th April to 15th August 2017 in Parakou public maternity wards. Prospective data collection was carried out, along with a comprehensive census of full term expectant mothers with no fetal anomaly incompatible with life and able to deliver vaginally.
Outcomes: Globally, 141 expectant mothers were enrolled in the study, including 47 practicing sexual abstinence (group A) and 94 sexually active (group B). The frequency of weekly sexual activities ranged from 1 to 7 with 2.4 ± 1.5 as mean value. According to group B expectant mothers practicing intra-vaginal ejaculation, sexual intercourse would facilitate delivery (80.00%, p=0.0006). Group B expectant mothers (87, 92.55%) engaged in sexual fondling, including 82 (94.25%) who practiced nipple stimulation. 23 (28.75%) regularly reached orgasm. Nipple stimulation and orgasm influenced significantly spontaneous labor with p=0.0001 and 0.0006 respectively. Among Group A expectant mothers, there were 9 or 19.15% prolonged pregnancy against 0% for Group B, 15 or 31.91% spontaneous delivery against 05.32% for Group B and 9 or 19.15% cesarean section against 4.25% for group B. There is a statistically significant link between sexuality and the mode of delivery (p=0.0001).
Conclusion: Nipple stimulation and orgasm during full term pregnancy facilitate spontaneous labor in childbirth process.

The couple experiences a significant and complex change during pregnancy, both physiologically and psychologically affecting their married life in three ways: Sexuality, sensuality and intimacy [1]. The expectant mother’s natural body changes will lead the couple to redefine their emotional and sexual life throughout pregnancy [2]. Labor induction is spontaneous in some women while it is deliberately initiated among others. Does sexual intercourse facilitate spontaneous labor?We will be able to provide response to this question through this study.

It was an analytical descriptive cohort study conducted from 15th April to 15th August 2017 in public maternity wards of the city of Parakou in Benin. Prospective data collection was carried out, along with a comprehensive census of full term expectant mothers with no fetal anomaly incompatible with life and able to deliver vaginally. The comprehensive census is split into two groups of full term expectant mothers, one group A expectant mother (practicing sexual abstinence) for two group B expectant mothers (sexually active). To make the two groups comparable, the choices were based on the same age, same gravidity and parity. Thus, each Group B expectant mother of the same age range (5 years), with the same gravidity and same parity was seen before and after Group A expectant mother. High-risk pregnancies were non-inclusion criteria. The respondents excluded from the study were expectant mothers consulted at term, who had no idea of their last menstrual period (LMP) or those who did not perform any dating scan, the lost to follow-up and expectant mothers who declined giving their informed consent. The variables examined included socio-demographic characteristics, gynecological and obstetric history, sexuality-related characteristics and the outcome of pregnancy. Data were processed with Epi-Info version 3.5.1. Chi2 test and Fisher test were used according to the case based on the sample size obtained. The conventional threshold level of statistical significance was defined by p

Globally, 141 expectant mothers were enrolled in the study, including 47 in group A and 94 in group B.

The number of weekly sexual intercourse ranged from 1 to 7 with 2.4 ± 1.5 as mean value. The expectant mothers who had sex once or twice weekly represented 64.89%. Varied positions were adopted during sexual intercourse and the most common was spooning (Figures 1-3). 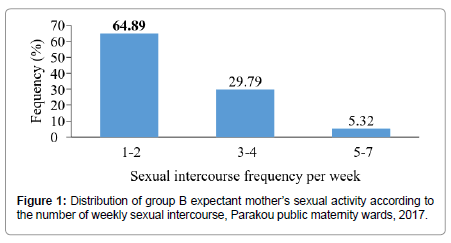 Abstinence from sex at final stage of pregnancy increased significantly the frequency of overdue pregnancies, spontaneous childbirth and caesarian sections (p=0.0001) as shown in Table 3.

The mean age of group A expectant mothers was 25.9 years ± 5.8 years against 26 years ± 6.1 for group B population. This finding is similar to Atrian et al.’s records in Iran with 26.38 years ± 6.04 years and 25.61 years ± 4.54 years, respectively [3]. Therefore, the expectant mothers are relatively young. A Malaysian study carried out in 2007 found 29.8 years ± 4.6 years and 29 years ± 4.4 years, respectively, which is higher than ours [4]. The fact that our study was conducted in a single hospital could account for this gap, since not all age ranges were necessarily enrolled.

It wasn’t possible to monitor the expectant mothers so as to ensure their compliance with the agreed sexual intercourse recommendations. More so, there was no parameter to control the level of compliance.

There is need for further studies in view of assessing the dose of prostaglandin and the total quantity of semen required for spontaneous labor.

It is possible for expectant mothers to have sexual intercourse. Nipple stimulation and orgasm during sex on full term pregnancy facilitates spontaneous labor. Therefore, sexuality can be recommended to full term expectant mothers with no contraindication to vaginal delivery.

We are grateful to the women and their spouses who have agreed to participate in this study.

Copyright: ©2017 Hounkponou FNM, et al. This is an open-access article distributed under the terms of the Creative Commons Attribution License, which permits unrestricted use, distribution, and reproduction in any medium, provided the original author and source are credited.