Impact of Temperature on Heparin and Protein Interactions

Heparan Sulfate (HS) and heparin are the most structurally complex members of the Glycosaminoglycan (GAG) family. These anionic, polydisperse, linear polysaccharides are highly sulfated and are O-glycosidically linked to a core protein to comprise HS and heparin Proteoglycans (PGs). HS, found on the external cell membrane and also in the Extracellular Matrix (ECM), can interact with many different protein ligands [1-3]. Many physiological and pathophysiological processes can be modulated through heparin/HS-protein interactions including: blood coagulation, cell growth and differentiation, host defense, viral infection, lipid transport and metabolism, cell-to-cell and cell-to-matrix signaling, inflammation, Alzheimer’s disease and cancer [1]. HS-protein interactions have been demonstrated to critically modulate the biological activity of the proteins through a variety of mechanisms, including localization of proteins in the ECM, regulation of enzymatic activities, ligands binding to receptors, and protein protection against proteolysis [2]. Heparin/HS-PGs are also essential cofactors required for the interaction of fibroblast growth factors (FGFs) with their protein-based receptors (FGFRs) [3,4].

Biomolecular interactions are governed by weak forces including hydrogen bonds, van der Waals forces, ionic interactions, and hydrophobic interactions. Biological systems are usually restricted to a narrow range of physical conditions, since biomacromolecules are functionally active only within a narrow range of environmental conditions, such as temperature, ionic strength, and pH. Extremes of these conditions can overcome the weak forces essential to maintaining the intricate structure of macromolecules [5]. The effect of temperature on heparin–protein interactions is, however, rarely discussed, although heparin can occupy new vibrational modes as the temperature increases [6]. In traditional binding assays, the affinity measurements of protein interactions are typically performed at room temperature or lower, with little or no reflection of the potential impact of the temperature on these interactions. In the present study, the effect of temperature on the binding of heparin and three representative bioactive proteins was evaluated, and the affinity and kinetics of the interactions were analyzed at these selected temperatures. Changes in the behavior of the interactions, particularly in the association and dissociation rates were observed.

Protein samples were made up in HBS-EP buffer (0.01 M 4-(2-hydroxyethyl)-1-piperazineethanesulfonic acid, 0.15 M sodium chloride, 3 mM ethylene diaminetetraacetic acid, 0.005% surfactant P20, pH 7.4). Protein samples at different concentrations were injected to the heparin chip at 30 μL/min. The HBS-EP buffer was flowed over the sensor surface to facilitate dissociation at the end of the sample injection. After dissociation over a 3 min, the surface of the sensor was completely regenerated with 30 μL of 2 M NaCl. Sensorgrams measured response as a function of time and were recorded at 10, 25 and 30 °C.

The kinetics and affinity of the interactions between heparin and three biologically important heparin-binding proteins (HBP) were measured by SPR under different temperatures. AT III is a serine protease inhibitor that inactivates various activated coagulation serine proteases, including factors IXa, Xa, TF-VIIa complex, and thrombin (factor IIa) [10,11]. The anticoagulant activity of heparin is primarily mediated through its binding and regulation of AT III [12-14], making the interaction between heparin and AT III a crucial step in the anticoagulation process. FGF1 and FGF2, also known as acidic and basic fibroblast growth factor, respectively, belong to the FGF family having 23 members and play an important role in the cell proliferation, differentiation, morphogenesis and angiogenesis, with heparin binding events highly involved [15-18].

For AT III binding, the sensorgrams of heparin-ATIII interaction fit very well to a two-state binding model (Figure 1), indicating that ATIII undergoes a conformational change after it binding to heparin. The conformational change in ATIII on heparin binding is well established and is important in ATIII-mediated inhibition of many serine proteases and anticoagulant activity of heparin [19]. It appears that temperature has minimal effects on the ATIII binding to heparin (1st state reaction) since the measured ka1 and kd1 values were not obviously different at 10, 25, and 30°C. It is interesting to see that the conformational change process (2nd state reaction) was impacted by temperature apparently, since the kd2 decreased with the increased temperature with kd2 = 4.78 × 10-4 (± 1.1 × 10-6) (1/S) at 10 °C, kd2 = 2.34 × 10-4 ( ± 6.7 × 10-7) (1/S) at 25°C, and kd2 = 7.9 × 10-7(± 5.3 × 10-9) (1/S) at 30°C. These results suggest that a higher temperature favors conformational change and gives more stable ATIII-heparin complex. It was found that heparin produces a decrease in the β-structure of ATIII and a compensatory increase in random coil [20], which determines that the conformational change process is an entropy increased (ΔS>0) event. In such case, the increase of temperature would induce a lower Gibbs free energy (ΔG), giving higher tendency to form the conformation changed ATIIIheparin complex, which was testified by the significantly lower value of kd2 we got at 30°C. From another point of view, since hydrophobic interaction, which is the main force for protein folding, was found to be weaker at lower temperature [21], the stability of ATIII-heparin complex might be reduced at lower temperature, corresponding to the higher kd2 at 10°C and 25°C.

For FGF1 and FGF2, 1:1 Langmuir binding models were used for fitting. The lower reaction rates were expected at lower temperature since higher temperatures supply more energy, potentially leading to an accelerated interaction between heparin and proteins. An increase of both ka and kd was observed for FGF1 and FGF2 with temperature elevated from 10°C to 25°C or 30°C. For FGF1, ka was 9.1 × 104 (1/ MS) at 10°C, and 2.0 × 105 (1/MS) at 25°C and 30°C, in the meantime kd increased from 7.6 × 10-3 (1/S) at 10°C to 0.017 (1/S) and 0.018 (1/S) at 25°C and 30°C, respectively. As ka and kd both increased by temperature, the affinity KD which was calculated by equation (KD = kd/ ka) became inestimable. For FGF1, the same value of KD (8.3 × 10-8 M) was obtained at 10°C and 25°C, implying a common binding affinity at different temperatures. This represents a good case to demonstrate that despite of the diverse kinetics between heparin and protein, binding affinity might be similar at different temperatures since the change of ka was compensated by the change of kd, when they were in the same direction. In contrast, it is interestingly noted that at 30 °C, KD of heparin-FGF1 binding was calculated to be 1.1 × 10-7 M, indicating a lower binding affinity than those at lower temperatures. This could be interpreted as the binding affinity was dominated by the faster dissociation rate at 30°C.

Effect of temperature on protein binding mass to heparin surface

The binding masses (RU) of three proteins to heparin surface were recorded at different protein concentrations and different temperatures. The binding mass corresponds to the maximum RU response achieved when certain amount of protein samples is flowed, for a fixed period of time, across the surface of a heparin-immobilized chip. Surprisingly, AT III showed highest binding mass to the chip at 25°C when compared to that obtained at lower (10°C) and higher (30°C) temperatures (Figure 4). Thus, one should carefully consider binding temperature when binding assays are performed under similar physicochemical conditions. As shown in Figure 5, the influence of temperature on binding mass of FGF1 to heparin surface was not significant. While FGF2 was observed to have notably largest RU at 25°C as shown in Figure 6, which was in consistent with the smallest KD (highest affinity) measured at ambient temperature. 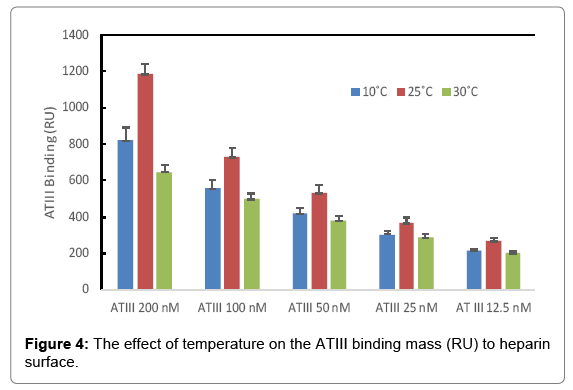 Figure 4: The effect of temperature on the ATIII binding mass (RU) to heparin surface. 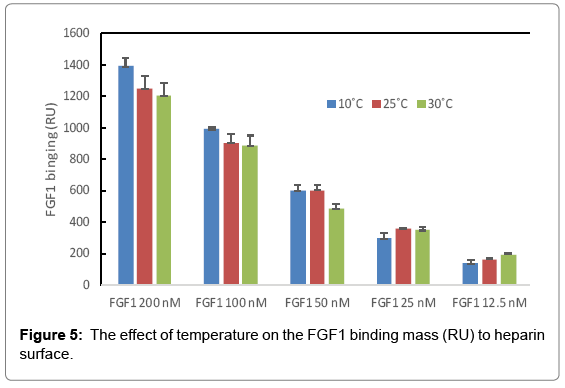 Figure 5: The effect of temperature on the FGF1 binding mass (RU) to heparin surface. 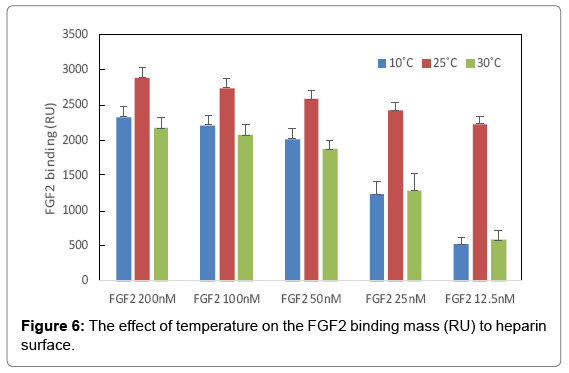 Figure 6: The effect of temperature on the FGF2 binding mass (RU) to heparin surface.

Copyright: © 2018 Zhao J, et al. This is an open-access article distributed under the terms of the Creative Commons Attribution License, which permits unrestricted use, distribution, and reproduction in any medium, provided the original author and source are credited.