Copyright: © 2016 Maeda K. This is an open-access article distributed under the terms of the Creative Commons Attribution License, which permits unrestricted use, distribution and reproduction in any medium, provided the original author and source are credited.

Aims: To precisely diagnose Fetal Heart Rate (FHR) with actocardiogram (ACG), which is the simultaneous record of FHR and movement signal spikes.

Method: Low frequency ultrasonic Doppler signal of fetal movement and high frequency Doppler of fetal heart beat were detected with single ultrasonic probe, and separated into two groups by a new electric circuit. FHR was recorded by autocorrelation heart rate meter, and fetal chest movement was changed to spikes, and their chart record was ACG.

Fetal abnormality was studied by Hon andCaldeyro-Barcia, detectingfetalbradycardia,latedecelerationsandlossofvariability [1]. However, developing mechanism of FHR changes was almost unknown, while subjective Fetal Heart Rate (FHR) patterns were discussed in clinical studies, then discrepancies between FHR deceleration and fetal outcome were discussed, and CTG was difficult to clarify fetal complications, though perinatal outcome was reported improved by fetal monitoring [2,3]. Fetal scalp lead ECG was used to record FHR, then changed to fetal heart sound by Hammaher [4] and Maeda [5], then further changed to ultrasonic Doppler fetal heart beat signals treated by autocorrelation heart rate meter [6], because the Doppler fetal heart signal was clearly detected even in the labor and autocorrelation heart rate meter recorded FHR as clearly as fetal scalp ECG. Ominous hypoxic signs were almost unknown, benign physiologic sinusoidal FHR was not separated from ominous pathologic sinusoidal one, fetal non-reactive state was diagnosed by maternal perception of fetal movement, and fetal hiccupping movement was unable to record on the CTG. Discrepancy was discussed between late decelerations and fetal outcome.

Production of actocardiograph made by the author’s hand

The author measured Doppler frequency of fetal movement by realtime FFT frequency analyzer listening noises of ultrasonic Doppler FHR monitor, fetal movement was identified by the observation of uterine wall movement, then detected fetal movement Doppler frequency to be 20 to 50 Hz when ultrasound was 2 MHz, while already we knew that Doppler frequency of fetal heart was 100 or more Hz in the analysis of Doppler fetal heart signal analysis, then it was possible to separate fetal heart signal from fetal movement one using ultrasound Doppler signals passing through a band pass filter, if the ultrasonic fetal monitor is used. Then TOITU TN400 ultrasound fetal CTG monitor (Tokyo) was remodeled attaching new electronic circuit (Figure 1) by the author’s hand, where maternal motion signals, of which frequency was 2 or lower Hz, were rejected by a CR high-pass filter, of which cut-off was 8 Hz, -6 dB/Oct to observe fetal Doppler signals with oscilloscope. FHR was recorded using original autocorrelation ultrasonic Doppler heart rate meter of TN400. The fetal movement Doppler signal was extracted by a band-pass filter, of which cut-off frequencies were 20 and 80 Hz, -18dB/Oct, in the prototype model. Movement spike signal was recorded on the channel which originally recorded uterine contraction; Commercial ACG models prepare 3 channels including FHR, fetal movement (associated a dot record) and proper channel to record uterine contraction to prepare CTG function. The proto-type originally produced by the author’s hand was changed to commercial models by the request of the author to TOITU (Tokyo) (Figure 2). 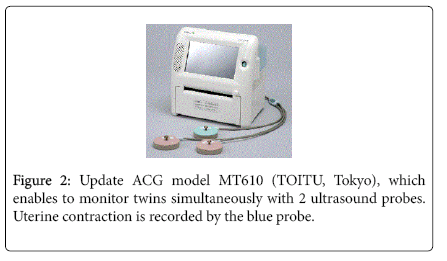 The ACG should be recorded to include active and resting fetal states, of which duration may be 10-30 min each. Active state is characterized by frequent fetal movement bursts and responding FHR accelerations. Recording of no acceleration against fetal movement bursts is non-reactive FHR caused by mild hypoxia possibly followed by severe hypoxia, so that early delivery may be recommended in nonreactive FHR. FHR pattern was recognized by the CTG function.

Fetal resting state was characterized by neither FHR acceleration nor fetal movement spike was recorded, where baseline variability was preserved. It will be a dangerous situation when both variability and acceleration are lost, which meant severe fetal brain damage caused by heavy hypoxia.

Fetal highly active state was characterized by prolonged fetal movement burst and transient tachycardia, which were usually temporally and safe. Fetal hiccupping’s were repeated sharp spikes with 2-3 sec interval, where total hiccupping duration is 10 or more min. Some fetuses repeatedly develop repeated hiccupping movements twice in a daytime, while fetal hiccupping is physiologic and not hazardous.

More than 420 cases were studied and the resulted as follows: 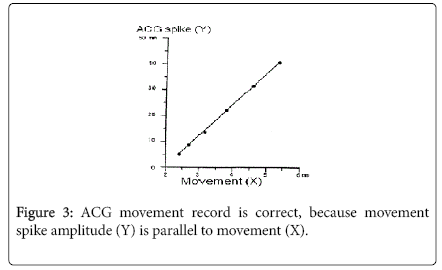 ACG was checked by us and researchers in the world

The primary commercial ACG model was tested by world researchers, where almost all of fetal movements were recorded by the ACG to confirm the utility of ACG [9-11]. Fetal movements were visually checked on the monitor screen of real-time ultrasound Bmode imaging device by a colleague of the author and the movement event was marked on the ACG record by clicking a rapid Morse code key, where the event mark was fully corresponded to ACG spikes [12].

FHR increases when the fetus moves with the 7 sec time lag, which is the response of fetal brain function in 20 or later weeks of pregnancy, namely fetal movement burst (cluster of fetal movement) accompanies FHR acceleration, which is triangular shape that is formed by the integral function of midbrain, which is the location of the acceleration development [13], The time constant of the integral function is 7 sec, because the correlation coefficient of FHR and fetal movement was the largest when the FHR delayed for 7 sec [14].

Fetal hiccupping movement, which was not recorded by CTG, was clearly recorded by ACG as ca. 0.5 Hz repeated sharp spikes, while the hiccupping was not controlled by fetal brain, but it is convulsive diaphragmatic contraction, thus, it will not be used to the estimation of fetal brain function. However, sometimes fetal hiccupping was perceived by the mother as fetal movement without acceleration, and then erroneously thought to be non-reactive. Fetal Heart Rate (FHR), where the ACG is useful to correct diagnosis.

Fetal growth was restricted by the reduction of fetal nursing materials, which was caused by the damage of active transfer function of placental villi, but passive transfer of oxygen was also damaged after the reduction of active transfer function, namely, mild fetal hypoxia was shown by hypoxic FHR sign, which was the loss of acceleration against fetal movement burst (non-reactive FHR), which showed hypoxic suppression of fetal brain function, where FHR variability was still preserved (Figure 4). 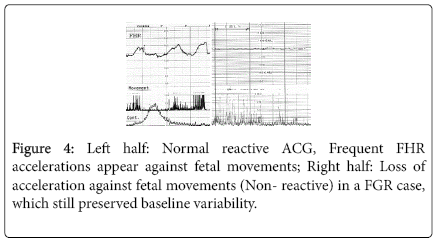 The loss of FHR variability

FHR baseline variability develops as fetal brain response to the minor fetal movements and its disappearance was the most severe hypoxic brain damage similar to anencephalic fetus, which appears after the loss of FHR acceleration, therefore the fetus is recommended to deliver before the loss of variability to prevent such brain damage as cerebral palsy in postnatal life (Figure 5) [16]. In spite of expected neonatal depression after C-section due to continuous fetal bradycardia of sick sinus syndrome, neonatal Apgar score was 9, and there was no asphyxia, because of normally active fetal brain estimated by its response with FHR acceleration against fetal movements in fetal ACG. Therefore, the discrepancy caused by pattern diagnosis of CTG was solved by the diagnosis of active fetal brain response to fetal movements in fetal ACG study.