Copyright: © 2015 Allam, et al. This is an open-access article distributed under the terms of the Creative Commons Attribution License, which permits unrestricted use, distribution, and reproduction in any medium, provided the original author and source are credited.

Background: Monocyte chemoattractant protein-1 (MCP-1) is an inducible protein that attracts monocytes to areas of injury and infection. Studies have shown that it is produced by gingival cells in periodontal diseases and that its incidence increases with the severity of the disease. The aim of the present study was to investigate the effects of nicotine, cigarette smoke condensate (CSC), and Porphyromonas gingivalis (P. gingivalis) on MCP-1 expression from human gingival fibroblasts (HGFs) in vitro.

Results: There were significant differences in MCP-1 level between the P. gingivalis (p=0.0432) and P. gingivalis with CSC (p=0.0037) groups when compared to the control group.

Conclusions: P. gingivalis stimulates an inflammatory response in periodontal tissues by increasing MCP-1, which helps attract host cells to combat the bacterial infection. Tobacco usage can mask the inflammatory responses normally seen in periodontal diseases by reducing the levels of MCP-1, thus allowing the bacteria to grow somewhat undetected. This could be one factor that explains why smoking is a major contributing factor to the initiation, development, and progression of periodontal diseases.

Periodontal diseases, among many other prevalent chronic diseases, have been constantly linked to smoking and tobacco use. The correlation between smoking and periodontal tissue destruction results mainly from the smoking-associated impairment of normal immunological surveillance or defensive mechanisms. Periodontal diseases are initiated by bacterial colonization that activates tissue mechanisms resulting in a series of inflammatory and immunological changes leading to connective tissue and bone destruction. Porphyromonas gingivalis (P. gingivalis) is one of the principal pathogens responsible for the development of adult periodontitis. Several reports have provided evidence to implicate P. gingivalis in the local destruction of periodontitis [1-4].

Monocyte functions are considered determinants to the periodontal breakdown in periodontal diseases. Monocyte chemoattractant protein-1 (MCP-1) is an inducible protein that has chemotactic activity for lymphocytes and monocytes, and is considered a major signal for the chemotaxis of mononuclear leukocytes [5,6]. MCP-1 is secreted by various cell types such as leukocytes, fibroblasts, kerotinocytes and endothelial cells in response to different endogenous and exogenous stimuli [7]. Overexpression of MCP-1 in the periodontal tissues of patients with periodontitis has been reported in the literature [8,9]. In addition, the association between MCP-1 and host responses was suggested to play a role in aggressive periodontitis [10]. All these studies suggest that the MCP-1 levels may be an important factor that affects the progression and the severity of the periodontal diseases. The aim of the present study was to investigate if nicotine, cigarette smoke condensate (CSC), and/or P. gingivalis would alter MCP-1 expression from human gingival fibroblasts in vitro.

Human gingival fibroblasts (HGFs) were cultured from clinically healthy gingival tissues removed from patients undergoing crown-lengthening surgery as described previously 11 with Institutional Review Board approval. The cells were grown in Dulbecco’s modified Eagle’s medium (DMEM) supplemented with 10% bovine growth serum, 4 mM L-Glutamine (HyClone), antibiotics (100 U/ml of penicillin, 100 U/ml of streptomycin and 0.25 µg/ml of fungi zone). Cultures were maintained at 37°C in a humidified atmosphere of 5% CO2 and 95% air. Confluent cells were detached with 0.25% trypsin and aliquots of separated cells were sub-cultured. Cells between the third and eighth passages were used.

Nicotine and CSC were purchased from Sigma (St. Louis, MO) and Murty Pharmaceuticals (Lexington, KY), respectively. P. gingivalis ATCC 33277 supernatant was obtained as a generous gift from Dr. John Ruby (University of Alabama at Birmingham, Birmingham, AL). The P. gingivalis were cultured in supplemented brain heart infusion growth medium. The collected supernatant was filtered twice through 0.2 µm membranes and then stored at -20°C until used.

Quantikine Human CCL2/MCP-1 Immunoassay kit (R&D Systems, Minneapolis, MN) was used to determine the concentration of MCP-1 in the conditioned media. Standard ELISA assays were performed. In brief, duplicate 5 µl aliquots of each sample were placed in 96-well microtiter plates pre-coated with rabbit anti-MCP-1 antiserum, incubated overnight, and blocked with bovine serum albumin (BSA). Biotinylated rabbit MCP-1 antibody was then added and the plates were developed with diluted avidin-horseradish peroxidase (HRP) followed by peroxidase substrate and hydrogen peroxide. The color development was stopped by the addition of H2SO4 and the absorbance was measured on a BioTek-ELISA reader (BioTek, Winooski, VT) at 450 nm and 540 nm. Readings at 540 nm were subtracted from the readings at 450 nm to correct for optical imperfections in the plate according to the manufacturer’s protocol. Final concentrations were determined from standard curves.

Table 1: MCP-1 expression from HGFs. *statistically significant at the 0.05 level compared to the control. 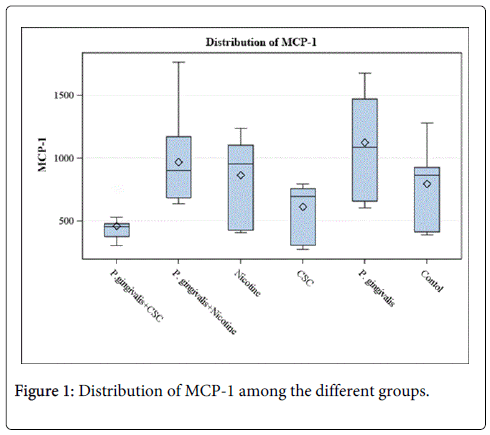 Figure 1: Distribution of MCP-1 among the different groups.

Periodontal diseases affect approximately 15%–35% of the adult population of the United States. It is considered a multifactorial disorder that may result in significant tissue damage and tooth loss eventually. 13 smokers are reported to be at increased risk for periodontal diseases [3,4,13]. Since most of the literature indicate that the microbial flora in the smoker oral cavity is similar to that found in non-smokers, it was concluded that the increased risk for periodontal diseases is not associated with an altered microbial profile, but rather to some changes in the host responses to these microbial pathogens.

There is evidence that HGFs derived from diseased sites in smokers produce higher levels of inflammatory cytokines. P. gingivalis has been identified as one of the major bacteria that contribute to the development of periodontal disease and the breakdown of periodontal tissues [14]. The present study investigated the effects of nicotine and CSC exposure either alone or combined with P. gingivalis on MCP-1 expression from HGFs in vitro. The aim was to test the hypothesis that smoking increases the risk of developing periodontal diseases by altering MCP-1 expression.

The results of this study are in accordance with previous reports. A study by Pradeep et al. [18] examined the gingival crevicular fluid (GCF) levels of MCP-1 in periodontal health and disease and indicated that MCP-1 concentrations increased in periodontal disease compared to health and correlated positively with the severity of disease. Tonetti et al. [19] reported marked expression of MCP-1 in gingival biopsies and in the inflammatory infiltrate from diseased periodontal sites. Kurtis et al. [10] also reported higher GCF levels of MCP-1 in patients with aggressive periodontitis or chronic periodontitis compared to controls.

The results also demonstrated that CSC caused down-regulation of MCP-1, which means less monocytes recruitment and thus weaker defensive mechanisms that leads to enhanced disease. So it could be concluded that tobacco usage can mask the inflammatory responses normally seen in periodontal diseases by reducing the levels of MCP-1, thus allowing the bacteria to grow somewhat undetected and permitting more rapid tissue destruction. CSC affected MCP-1 levels differently than nicotine probably because it is comprised of over 4000 chemicals that are collected in their particulate phase from the cigarette smoke when tobacco is burned. It is not clear, at this time, which of these chemicals is responsible for reducing the MCP-1 levels.

The results of the current study provided insights into the effects of nicotine, CSC, and P. gingivalis on the expression of MCP-1 from HGFs. It was observed that HGFs increased the expression of MCP-1 when exposed to P. gingivalis and the opposite when exposed to CSC which may help to explain why smoking is a major contributing factor that plays a role in the initiation, development, and progression of periodontal diseases by allowing for more bacterial growth. Further studies are needed to investigate the exact mechanisms that smoking ingredients disrupt the immune responses of the periodontal tissues and alter cytokines expression.

This study was funded by the Indiana University Purdue University Indianapolis Multidisciplinary Undergraduate Research Institute and the Tobacco Cessation and Biobehavioral Group.