Cutaneous leishmaniasis (CL) is the most prevalent form of the disease caused by the parasites Leishmania. However, effective topical treatments for the disease are lacking. Fluconazole (FLZ) is an antifungal agent that inhibits a key enzyme for the production of ergosterol, the main sterol in membranes of fungi and parasites. An in vitro evaluation of antileishmanial activity of a microemulsion intended for topical use, with FLZ as active pharmaceutical ingredient, was performed.   The formulation effectively inhibited L. braziliensis promastigotes growth. This study provides baseline data about the efficacy of FLZ microemulsion on L. braziliensis promastigotes. Previous reports had shown poor activity of the drug, so this result highlighted the role of the vehicle.   Although further work is needed, this semisolid dosage form could be useful for the local treatment of CL in the New World. It is also interesting to mention the importance of repositioning well-known drugs for new uses to offer treatments more quickly, particularly for this disease that greatly affects public health of poor regions.

Leishmania parasites cause Leishmaniasis, a worldwide spread disease with 2 million cases annually. Although Leishmaniasis is an ancient disease, it has recently been classified as an emerging pathology and considered a neglected disease. Diverse factors are favoring its expansion and turning it into a public health problem: human-made and environmental changes such as urbanization, migration and deforestation host immunity and individual risk factors, mainly coinfection with human immunodeficiency virus and malnutrition and inadequate vector o reservoir control, treatment failure and emerging of antileishmanial drug resistance due to incomplete treatment [1-3]. Moreover, diagnosis and treatment is not often possible in rural areas where the disease is more frequent. Leishmania parasites can cause four main clinical manifestations: cutaneous, diffuse cutaneous, mucocutaneous or mucosal lesions, and visceral pathology. Visceral leishmaniasis is the most severe form of the disease, but cutaneous leishmaniasis (CL) is the most prevalent form. CL is caused mostly by L. major in the Old World and by L. Mexicana, L. peruviana, L. guyanensis and L. braziliensis in the New World. The prognosis of the disease depends on the Leishmania specie and immunological condition of the patient. Although CL lesions may be self-limited, the pathology needs to be treated to reduce scars and prevent potential dissemination of the disease. Standard treatment of CL includes pentavalent antimonials by intravenous or intramuscular route, which produce serious hepatic, cardiac and renal side effects. It is an invasive long treatment therefore patient compliance is difficult. The World Health Organization also recommends intralesional treatment with antimonial drugs depending on clinical features. Oral alternatives such as miltefosine, allopurinol and azoles have been little used. But, there is still lack of effective topical treatments for CL [1,4,5].

Fluconazole (FLZ) is a bis-triazole antifungal agent with activity against Candida spp., Blastomyces dermatitidis, Cryptococcus neoformans, Epidermophytom spp., Histoplasma, Microsporum spp. and Trichophyton spp. It has been extensively used in the treatment of dermatophytoses after oral administration FLZ concentration in the skin is high due to great affinity to the stratum corneum (SC) and the concentration within the skin is much higher than the minimum inhibitory concentration (MIC) for most dermatophytes. However, the use of FLZ as topical treatment is not a general practice [6-9].

Azole antifungals inhibit a key enzyme for the production of ergosterol, the main sterol in membranes of fungi and parasites. Concerning the use of FLZ for Leishmania spp., results are controversial. It has been reported that in vitro anti-leishmanial activity of FLZ was poor [10]. Nevertheless, oral FLZ has been reported for the treatment of CL and the drug has shown activity against Leishmania spp. A trial investigated a six-week course of oral FLZ in comparison to the use of placebo, and FLZ shortened healing time of L. major cutaneous lesions (median 8.5 weeks FLZ group versus 11.2 weeks placebo group); however, high doses (200 or 400 mg/day for 6 weeks) were needed and potential side effects are of concern [11-15]. More recently, an immunosuppressed patient was successfully treated with allopurinol and fluconazole, as an alternative to antimonial drugs in a patient with renal failure [16]. Also, successful results for the oral therapy with FLZ for L. braziliensis have been published for the first time, pointing out that the response to treatment is dose dependant [17].

So far FLZ efficacy in topical therapy has been little studied. A study in which mice, infected with Leishmania (L) major, were treated with FLZ creams (1, 2, or 10% w/w) showed poor results [18]. But it is worth to mention that in the latter case formulations included propylene glycol in their composition and we found in previous works that the presence of this excipient in the formulation may affect FLZ activity [19,20].

Moreover, we reported that FLZ penetration and retention within the skin was greater when formulated in a microemulsion(ME) compared with other conventional topical dosage forms such as emulsion or emulgel [19].

In view of results of our previous studies, the aim of this work was to preliminary assess the in vitro antileishmanial activity of a FLZME to evaluate the potential usefulness for the treatment of CL. MEs have favorable properties for topical application but skin irritation is worrying because of the high content of surfactants, therefore we also evaluated skin irritancy of the formulation [21,22].

FLZ-ME was prepared according to formula shown in Table 1; composition was selected and discussed in our previous work [19]. Polyoxyl 40 hydrogenated castor oil (CRH 40; kindly supplied by Cognis, Argentina) was heated to a temperature of 40°C, and castor oil (Fabriquimica S.R.L., Argentina) was added with continuous stirring. Then, FLZ (Parafarm, Argentina), previously dissolved in Transcutol® P (diethyleneglycol monoethyl ether, Gattefossé, France) was added to the surfactant-oil mixture; agitation continued until homogenization. Finally, a hydrogel of carboxymethylcellulose sodium (Fabriquimica S.R.L., Argentina) and sterile distilled water was added to the preparation; stirring continued for 30 min, until total homogenization.

For the evaluation of in vitro antileishmania activity (3H) thymidine incorporation assay was performed on L. braziliensis promastigotes (M2903 strain). Exponentially growing parasites were centrifuged at 1200 g × 15 min, adjusted to a cell density of 103-107 parasites/ ml in fresh LIT medium supplemented with 10% heat-inactivated fetal bovine serum (Gibco), 100 U/mL penicillin and 100 μg/mL streptomycin. Parasites were seeded in a 96-well microplate (150 μl per well) in presence of 1 μCi (3H) thymidine (3H-T; Perkin Elmer) and allowed to grow incorporating 3H-T during 16 h. Counts per minute (cpm) of triplicate cultures were measured by an automated liquid scintillation counter (Packard, Downers Grove, IL). Parasites drug susceptibility was assayed for dilutions in ethanol:water (50:50) of FLZ microemulsion and AmB Deoxycholate (Northia®) as reference during 72 h. For the last 16 hr of culture, cells were pulsed with 1 μCi per well 3H-T. As control of 0% of inhibition parasites with medium and ethanol: water were assayed.

Skin irritation was assessed as follows, the backs of six albino rabbits (Gilardoni-Cabañas, Argentina) were clipped free of hair. FLZ-ME was tested on two one inch square sites on the same animal; one site was intact and one was abraded in such a way that the stratum corneum

was opened but without bleeding. Formulation was tested undiluted (0.5 g). Each test site was covered with two layers of one inch square surgical gauze secured in place with tape. The entire trunk of the animal was then wrapped with rubberized cloth in order to retard evaporation and hold the patches in position. Wrapping was removed 24 h after application. The test sites were evaluated at 24, 48 and 72 h for erythema and edema. Evaluations of abraded and intact sites were separately recorded. Maximal score was set in 8 [23]. Experiments involving animals were made according to international ethics and Approval has been obtained from the Ethical Committee for the Care and Use of Laboratory Animals of the Faculty of Pharmacy and Biochemistry, University of Buenos Aires (050313-2 EXP-FYB 0747495/2012). Data were analyzed statistically by unpaired T-student Test, two-tailed using GraphPad InStat (level of significance for p<0.05).

FLZ-ME showed similar in vitro activity against L. braziliensis than AmB Deoxycholate, a second line drug used for the treatment of CL (Figure 1). The most concentrated and most diluted samples (100 and 1μg/ml, respectively) had no statistical difference respect to AmB Deoxycholate (p>0.05). It is also important to mention that blank formulation inhibited the parasite growth; the blank formulation showed 66.73 ± 7.83 % inhibition of parasite growth, however FLZ-ME showed higher inhibition (statistically different, p<0.05). 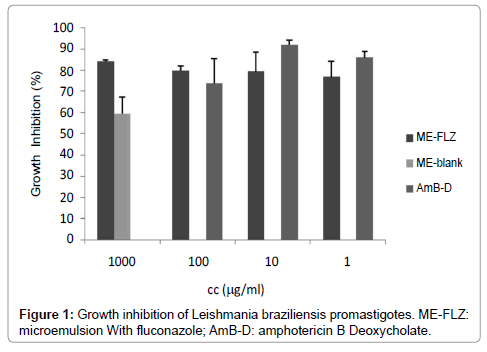 The score of the skin irritancy test was 0.54. No dermal lesions were observed at any time and the observed slight erythema was reversible, so this semisolid is suitable for topical treatment.

Results are remarkable as previous reports informed low activity of the drug activity against some parasite species. As mentioned above a topical cream containing FLZ was compared with topical paromomycin hydrophilic gel, in BALB/c mice infected with L. amazonensis or L. major, and FLZ cream showed to be ineffective [18] considering this outcome and, as it was highlighted, those creams contained propilenglycol, our results are relevant as they show the importance of the vehicle on drug activity and also emphasize the different drug susceptibility of Leishmania species.

The synergistic activity seen for the drug in the ME may be due to the high content of surfactants which alter membrane fluidity causing electrolyte or other vital substances depletion. This observation was also reported for a micellar formulation with poloxamer 188 [24]. Furthermore, it was published that surfactants had strong lytic effect against Trypanosoma cruzi, a parasite of the same family as Leishmania, and they enhanced activity of antiparasitic drugs, probably by the modification of membrane permeability [25-27].

Modern therapy challenge is to make drugs reach target sites with the minimal adverse effects. The treatment of CL needs rational selection of the drug and also an appropriate vehicle. Despite erratic efficacy of treatments, depending on L. species and diverse patient’s conditions, it is recommended that meglumine antimoniate should be restricted to species with poor response to alternative medications and should be used with caution in patients older than 60 years because of its toxicity [28,29].

In this preliminary study FLZ-ME showed to effectively inhibit L. braziliensis promastigotes growth, which is one of the most frequent species identified in CL of the New World. Although results are encouraging, further work is needed to test different Leishmania strains and at the intracellular amastigote level to assess the effect of FLZ-ME on the different parasite stages. In addition, the formulation should be tested at in vivo in future work.

This semisolid dosage form is promising for the local treatment of CL in the New World. This fact is very important as topical alternatives are required to reduce oral and parenteral courses in order to help patient compliance. Topical treatment is cheaper and would arouse fewer adverse effects.

This work was financially supported with funds from Project UBACyT B003 (2008-2010) from University of Buenos Aires. Authors thank Prof. Dr Emilio Malchiodi for his support with the antileismanial in vitro assay.

Copyright: ©2014 Salerno C, et al. This is an open-access article distributed under the terms of the Creative Commons Attribution License, which permits unrestricted use, distribution, and reproduction in any medium, provided the original author and source are credited.