Background: Treatment regimens for chronic hepatitis B virus (HBV) infection are efficient in suppressing viral load and improving hepatocellular injury and its complications. However, current antiviral agents such as nucleos(t)ide analogues or interferon-alpha are inefficient to reconstitute immunologic control of a persistent HBV infection or mediate clearance of HBV-DNA. It was hypothesized that high levels of circulating HBV surface antigens (HBsAg) produced by episomal and integrated HBV-DNA lead to immune tolerance of HBV and contribute to chronic HBV infection. Hence, low level HBsAg in a fraction of patients may create a window for the reconstitution of an HBV-specific immune response and control of infection. Previous studies in transplant patients indicate that antiviral therapy, in combination with a third generation PreS/S vaccine, may control HBV viremia and induce seroconversion to anti-HBs.
Methods: We determined the frequency of low level HBsAg (<500 IU/mL) carriers by a data request in two diagnostic laboratories. Three HBsAg positive, NUC treated, low level HBsAg carriers were immunized with 6 to 11 doses of Sci-B-VacTM. The kinetics of HBsAg reduction, anti-HBs seroconversion and T cell response after vaccination was determined.
Results: Approximately 30% of patients with chronic hepatitis B in two large cohorts showed low HBsAg concentrations of <500 IU/mL. Three low level HBsAg carriers with baseline concentrations of 448, 20.2 and 19.2 IU/mL HBsAg seroconverted to anti-HBs after being vaccinated with Sci-B-VacTM. Two years after vaccination, the anti-HBs titer was 100, 600 and 260 IU/L, respectively.
Conclusion: These preliminary data suggest that combining NUC´s with PreS1/PreS2/S vaccination in low level carriers of HBsAg may provide a new therapy to achieve functional control of chronic hepatitis B by seroconversion to anti-HBs.

Available therapies for chronic hepatitis B (CHB) are limited to either pegylated interferon-alfa (peg-IFN-α) or long-term nucleos(t)ide analogues (NUCs) treatment. Fortunately, currently used NUCs (i.e. Entecavir and Tenofovir) suppress viral replication with high-barrier-to-resistance in the majority of patients [1]. Complete clearance of HBV requires according to current understanding, also an efficient immune response, which is defective in HBsAg carriers. Such carriers may develop a lifelong persistence of episomal covalently closed circular DNA (cccDNA). In recent years several studies in chimpanzees and patients indicate high-frequency of HBV-DNA to be integrated into the host genome during infection [2-4]. The free episomal as well as the integrated HBV-DNA turn into an important source for the production of large amounts of HBsAg, which remains unaffected by NUC therapy [5]. It has previously been shown that the persistence of a high load of HBsAg causes antigen-specific immune tolerance [6,7]. This may explain, at least in part, why attempts of therapeutic vaccination with conventional HBsAg vaccines failed in numerous clinical trials [4,8,9].

Cessation of NUC therapy has been suggested as a potential strategy to induce "spontaneous" HBV immune control [10-12]. However, discontinuation of NUC monotherapy in treated HBeAg negative or HBeAg positive patients was associated with poor HBsAg seroclearance and anti-HBs seroconversion rates [13]. The only statistically significant correlate for HBsAg seroclearence during offtherapy was a low baseline HBsAg concentration, indicating that a high HBsAg level may be an important factor in maintaining immunotolerance in chronic Hepatitis B carriers [5]. It was therefore hypothesized that patients under NUC therapy, who have a low HBsAg load, may be good candidates for an effective therapeutic vaccination. Previous studies in transplant and chronic hepatitis B (CHB) patients indicate that antiviral therapy, in combination with immunization using a third generation vaccine (Sci-B-VacTM), can facilitate control of HBV viremia [14-17].

Table 1: Baseline characteristics (age, gender, HBsAg Status,) of the 3 vaccinated patients with low level of HBsAg one control (A) with high level HBsAg and 4 patients without vaccination controls (B), * below detection level, ** within normal limits, + HBsAg (IU/mL) prior to vaccination.

An anonymous data request was performed in two virologic diagnostic laboratories to determine the frequency of low-level carriers of HBsAg.

We conducted an individual therapeutic trial in patients with CHB with low level of HBsAg (<500 IU/mL) to assess the safety and efficacy of PreS/S (Sci-B-VacTM) vaccination in chronic carriers. Three patients with a HBsAg concentration <500 IU/mL received 6 to 11 intramuscular injections of Sci-B-VacTM (20 μg). One patient with high level HBsAg received 5 vaccinations. Furthermore, four low-level HBsAg carriers, unvaccinated, NUC treated patients were included. All patients and controls were monitored at least two years (after the first vaccination). All patients provided written informed consent.

HBsAg, anti-HBs and HBV-DNA were determined before and after each vaccination. Transaminases (GOT, GPT, GGT) and Bilirubin monitoring was performed at the same time. The T cell response was examined by ELISpot and proliferation assay after the last vaccination.

Sci-B-Vac™ is an aluminum hydroxide adjuvanted recombinant hepatitis B vaccine, manufactured by VBI Sci-Vac Israel Ltd [17]. The Pre-S1/Pre-S2/S vaccine is produced in mammalian Chinese hamster ovary (CHO) cells, transfected with appropriate sequences that code for the HBV envelope proteins - the small S hepatitis B surface antigen (SHBs), the middle Pre-S2 (MHBs) and the large Pre-S1 envelope protein (LHBs). The purified HBs particles, which are of the adw2 subtype, secreted by the transfected CHO cells, revealed the forms, mainly the SHBs (75-77% p24, gp27), the MHBs (17-21% gp33, gp36) and the LHBs (3-7% p39, gp42).

Peripheral blood mononuclear cells (PBMCs) from heparinized blood were separated by Ficoll-Hypaque TM density gradient centrifugation. 4x105 PBMCs in 200 μL culture volume were pre-incubated for 2 days without and with 1 μg/mL of sub viral HBsAg as described previously [18]. In parallel, PBMCs were stimulated by phytohemagglutinin (4 μg/mL), used as positive control. After further incubation for 2 days in ELISpot plates, IFN-γ spots were determined by an ELISpot plate reader. The cultures were performed in triplicates. IFN-γ production was considered positive when obtaining ≥ 5 spots increment and a quotient of HBV specific and non-stimulated values of ≥ 2.

Proliferation assay was performed in round bottom microtiter plates with 2.5x105 PBMCs per 200 μL culture as described previously [18]. Cells were incubated for 6 days without and with 0.25, 0.5 or 1 μg/ml of the subviral HBsAg. Stimulation with pokeweed mitogen (5 μg/mL) served as positive control. Cell cultures were grown in triplicates and proliferation was measured radioactively as counts cpm of [3H] thymidine uptake. Stimulation index (SI) of ≥ 2.5 was considered positive.

We have analysed the HBsAg concentrations in 1482 chronically HBV-infected patients from the University Hospital Essen (n=1131) and the University Hospital, Munich (n=351) in order to calculate the frequency of low level HBsAg in patients with chronic hepatitis B. All patients were under NUC standard therapy. The distribution of HBsAg concentrations in these two cohorts showed that 31% (Essen) and 27.6% (Munich) of the patients are low-level carriers with HBsAg titers <500 IU/mL (Figure 1). Concentrations of HBsAg IU/mL ranging between 500 and 5x104 IU/mL were observed in 39% of the patients from Munich and 45% from Essen. 28% showed showed concentrations of >5 × 105 (Munich) and 25% (Essen), respectively. Three patients with chronic hepatitis B and low level of HBsAg IU/mL of 448, 20, 2 and 19.2 IU/mL, were included in this pilot therapeutic trial (Table 1). All patients were treated with NUCs (Baraclude/Viread) for at least two years prior and during vaccination and were HBVDNA negative at time of vaccination (below detection level). Patients received 6-11 vaccine doses at designated intervals (Sci-B-VacTM 20 μg per injection) (Figure 2A). 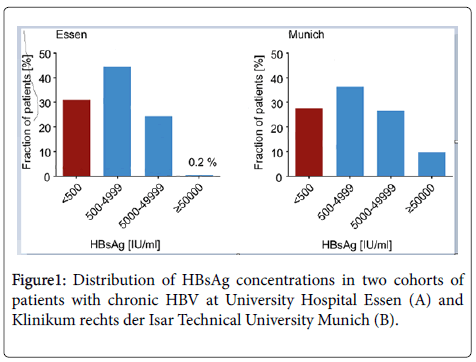 All 3 patients seroconverted to anti-HBs. The kinetics of their antibody response are shown in Figure 2A. One year after the onset of vaccination, anti-HBs titers where 75, 77 and 152 IU/L and 100, 600 and 260 IU/L after 3 years, respectively. 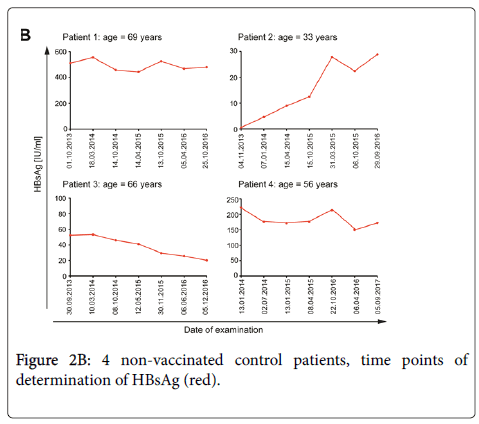 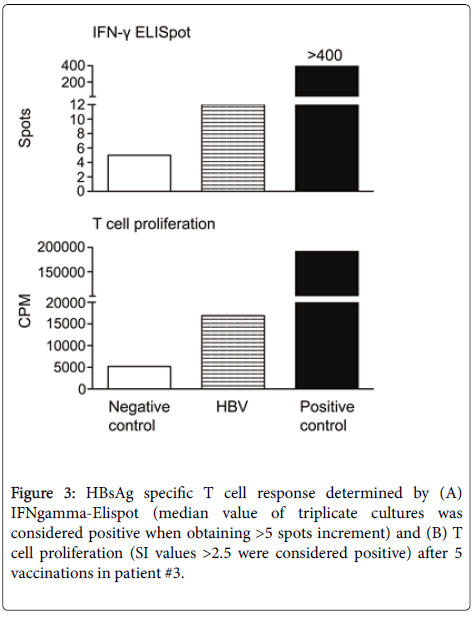 Determination of transaminases (GOT, GPT, GGT) and bilirubin in the three vaccinated low level HBsAg carriers prior to and during treatment and follow-up showed no significant changes (Figure 4). 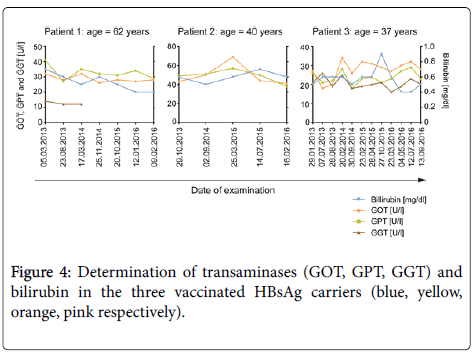 Patients tolerated the vaccine well. None of the patients reported local or systemic reactions at any time.

The finding of low level HBsAg carriers in two cohorts of about 30% who may be less immuntolerant in comparison to high-level carriers is an indication that therapeutic vaccination trials may be an option. In this individual therapeutic trial, HBV carriers with low-level HBsAg <500 IU/mL and undetectable circulating HBV-DNA under NUC treatment, were treated by repeated vaccination with a third generation PreS/S vaccine (Sci-B-VacTM). All low-level HBsAg carriers seroconverted to anti-HBs with increasing antibody concentrations levels of HBsAg were either declining or remained at very low levels indicating functional control of HBV infection up to two years of follow up. These findings suggest that low HBsAg concentration may have a minor tolerizing effect of HBsAg as compaired to high level carriers [19]. The rational of this concept is that a reduction of HBsAg concentration may lead to an appropriate B and T cell response with subsequent functional cure of chronic hepatitis B. In view of the cumulative experience that NUCs treatment usually fails to reduce HBsAg levels in CHB, a number of experimental methods to control and reduce circulating HBsAg levels are now being tested [20-23]. For example, new therapies based on RNA interference (RNAi) were shown to directly target HBsAg transcripts with high specificity and thereby reduce the production of viral proteins and ameliorate putative tolerance [22]. Other methods include the development of nucleic acid polymers (NAPs) with a unique ability to block the secretion of HBsAg from HBV-infected hepatocytes [23]. NAPs therapy has been evaluated so far in two clinical studies. This therapy was accompanied by 2-7 log reductions of serum HBsAg, 3-9 log reductions of HBV-DNA and the seroconversion to anti-HBs in 9 of 12 patients [20,21].

These new therapies restore the function of exhausted virus-specific B and T cells. In the patients described in our present study who had initially low HBsAg levels, virus-specific B cell response was generated through vaccination with the third generation PreS/S HBV vaccine. Such a multi-functional B and T cell response may prevent de novo infection of so far uninfected hepatocytes. In addition to a B cell response, we could show in patient #3, who had the highest antibody response, an HBV-specific T cell response. In the two remaining patients, however, T cell responses were below the cutoff. Although highly sensitive assays were used, the number of HBV-specific T cells may have been too low for appropriate detection.

The present individual therapeutic trial confirms a previous observation in CHB patients in Vietnam treated with a combination of a NUC (Lamivudine) and Sci-B-VacTM, that anti-HBs seroconversion can be induced by repeated immunization with a potent-aluminum hydroxide adjuvanted, mammalian cell derived, highly immunogenic HBV vaccine [14,17]. Yet there is still no evidence that sterilizing immunity against HBV can be achieved using this strategy alone. Furthermore, it is noted that despite the induction of anti-HBs seroconversion, HBsAg remains detectable albeit at low levels. This persistence of circulating HBsAg may be explained, at least in part, by continuous secretion of HBsAg, coded by integrated HBV-DNA and undistinguishable by current methods from HBsAg synthesized by episomal HBV-DNA. Furthermore, in theory, mutations within the surface protein, regardless if coded by episomal or integrated HBV-DNA, may impede the binding activity to vaccine-induced anti-HBs.

Yet, we have not evaluated the impact of the experimental protocol on HBV-cccDNA and therefore, our results do not provide proof for complete resolution of persistent HBV infection. However, our results suggest that vaccination with a preS/S HBV vaccine may contribute to functional control of persistent HBV infection and should be evaluated in future clinical trials in combination with new anti-viral agent(s) directed to disrupt cccDNA.

In conclusion, low levels of circulating HBsAg appears to have a less severe immune tolerance in patients and may allow induction protective immune response against HBV. The quantification of HBsAg in two large patient cohorts indicate that there is a substancial number of patients (30%) who are low level carrier of HBsAg under NUC therapy and may be candidates for vaccination strategies proposed in this pilot study.

Copyright: © 2019 Roggendorf H, et al. This is an open-access article distributed under the terms of the Creative Commons Attribution License, which permits unrestricted use, distribution, and reproduction in any medium, provided the original author and source are credited.