Cellulose based polymers have shown tremendous potential as drug delivery carrier for oral drug delivery system (DDS). Hydroxyethyl cellulose (HEC) and hydroxypropyl cellulose (HPC) are widely explored as excipients to improve the solubility of poorly water soluble drugs and to improve self-life of dosage form. This work is an attempt to modulate the physicochemical properties of these cellulose derivatives using biofield treatment. The treated HEC and HPC polymer were characterized by X-ray diffraction (XRD), differential scanning calorimetry (DSC) and thermogravimetric analysis (TGA). The XRD studies revealed a semi-crystalline nature of both the polymers. Crystallite size was computed using Scherrer’s formula, and treated HEC polymer showed a significant increase in percentage crystallite size (835%) as compared to the control polymer. This higher increase in crystallite size might be associated with greater crystallite indices causing a reduction in amorphous regions in the polymer. However treated HPC polymer showed decrease in crystallite size by -64.05% as compared to control HPC. DSC analysis on HEC polymer revealed the presence of glass transition temperature in control and treated HEC polymer. We observed an increase in glass transition temperature in treated HEC, which might be associated with restricted segmental motion induced by biofield. Nonetheless, HPC has not showed any glass transition. And no change in melting temperature peak was observed in treated HPC (T2) however melting temperature was decreased in T1 as compared to control HPC. TGA analysis established the higher thermal stability of treated HEC and HPC. CHNSO results showed significant increase in percentage oxygen and hydrogen in HEC and HPC polymers as compared to control samples. This confirmed that biofield had induced changes in chemical nature and elemental composition of the treated polymers (HEC and HPC).

The oral route is by far the most preferred and convenient route for delivery of many pharmaceutically active drugs. Thus, the oral mucosa has many properties that make it a fascinating choice for drug delivery [1]. Oral drug delivery is an excellent non-invasive approach that provides alternative to invasive routes such as intravenous, intramuscular, subcutaneous administration of drugs. Nevertheless, it also provides several challenges for pharmaceutical scientist investigating novel delivery techniques to overcome. There are different formulations strategies including sprays, tablets, mouthwashes, gels, pastes and patches are currently used for delivery into and across the oral mucosa. DDS developed for local delivery to mucosal diseases require different pharmacokinetic behavior compared to topical delivery for systemic applications [1]. Presently, there are a small number of drugs which are routinely delivered via the sublingual or buccal route e.g. systemic delivery of glyceryl trinitrate for angina relief and topical corticosteroid administration for inflammatory diseases of the oral mucosa including lichen planus [2]. Nevertheless, the formulations administered orally face a daunting challenge by acidic pH and enzymes being produced in the stomach. The formulation dosage form suffers premature release due to degradation of polymer in gastrointestinal pH [3] and it reduces targeted action of the encapsulated drug. Hence, more time/pH controlled DDS should be designed to overcome these obstacles

Cellulose and cellulose based derivatives are accepted as natural materials with good tolerance by the human body and are commonly used in medical and pharmaceutical applications such as targeted DDS [4,5]. The other important properties of cellulose polymers are biocompatibility with tissue and blood, non-toxicity and low cost [5].

HEC is an excellent derivative of cellulose with superior water retention and biocompatibility. It contains several –OH groups on its structure that allows it to be chemically modified by various means [6,7]. Recently, HEC-based swelling/floating gastroretentive DDS has been tried for its clinical relevance in healthy volunteers [8]. The HPC is another well-known polymer wherein few –OH group in repeating sugar units are hydroxypropylated using propylene oxide [9]. The high glass transition temperature of HPC confers great stability and restricts drug diffusion, recrystallization during storage. Moreover, the free –OH group of HEC readily form the hydrogen bond with a carbonyl group of pharmaceuticals, which provides stability in the solid state [10-12].

Nevertheless HEC and HPC matrices due to high hydrophilicity on few instances leads to a premature release of drugs and that need to be modulated in order to enhance its pharmaceutical applicability. Biofield is being generated by a human body that causes a paramount effect on surroundings. Mr. Mahendra Trivedi is well known to change the characteristics of various living and non-living things in controlled research experiments through his biofield, referred herein as Biofield treatment. The said Biofield has significantly changed the atomic, crystalline, and thermal characteristics of various materials such as metals, ceramics and carbon allotropes [13-20]. Recently it was reported that the use of biofield has significantly improved the yield and quality of various agricultural products [21-23]. Furthermore biofield has significantly optimized antibiotic sensitivity and produced biochemical reactions which further changed the characteristics of pathogenic microbes [24-26]. Additionally the effects of biofield on growth and anatomical characteristics of the herb Pogostemon cablin used in perfumes, in incense/insect repellents, were recently investigated [27].

The Hydroxyethyl cellulose (HEC) and hydroxypropyl cellulose (HPC) were procured from Sigma Aldrich, USA. The HEC and HPC powders were treated with Mr. Trivedi’s biofield at different times, and samples were subjected to polymer characterization.

Polymer samples (HEC and HPC) from one batch was divided into three different parts. One was considered as a control while the remaining two were exposed to different amount of Mr. Trivedi’s biofield at different time intervals and named as T1 and T2 (treated samples). In order to avoid errors, only standardized parameters were used for comparison.

X-ray diffraction (XRD) study: X-ray diffraction analysis of the polymer samples (HEC and HPC) were carried out using a power Phillips Holland PW 1710 X-ray diffractometer system. A copper anode with nickel filter was used. The wavelength of the radiation was 1.54056 Ǻ. The data were obtained in the form of 2θ versus intensity (a.u) chart. The crystallite size was calculated from XRD data using following formula.

Where λ is the wavelength and k is the equipment constant with a value of 0.94.

Differential scanning calorimetry (DSC): DSC (HEC and HPC) were recorded with Pyris-6 DSC Perkin Elmer, at a heating rate of 10°C/ min with a nitrogen flow of 5 mL/min.

Thermogravimetric analysis (TGA): The thermal stability of the (HEC and HPC) was measured on a Mettler Toledo simultaneous TGA thermogravimetric analyzer (TGA) and differential thermal analysis (DTA). The samples were heated from room temperature to 400°C with a heating rate of 5°C/min under oxygen atmosphere 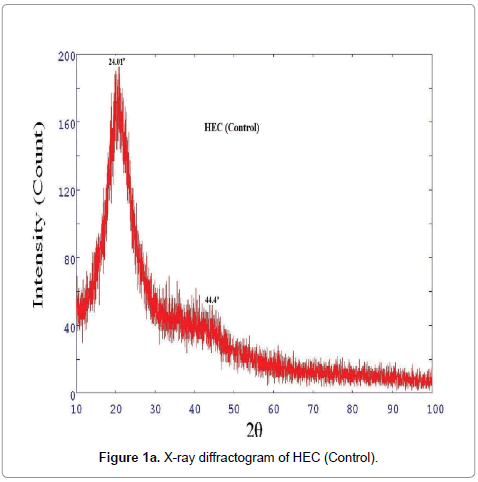 Figure 1a: Representative photomicrograph of histopathological features in pulmonary necropsies. 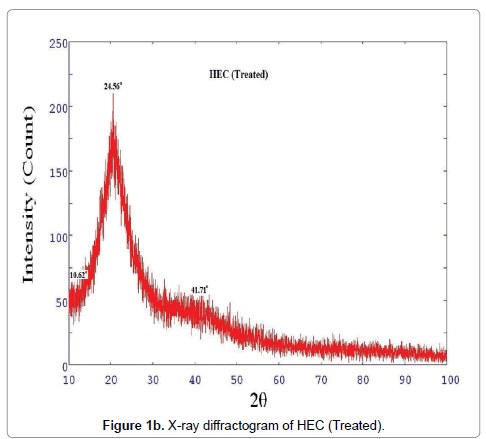 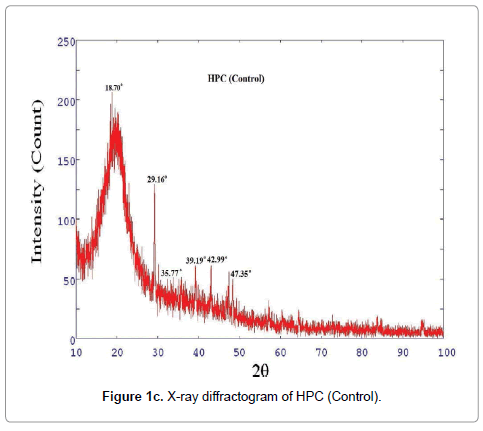 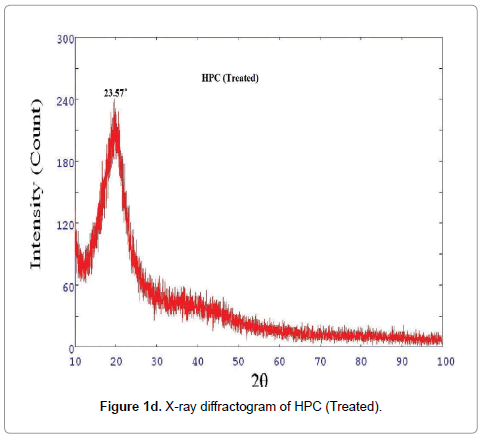 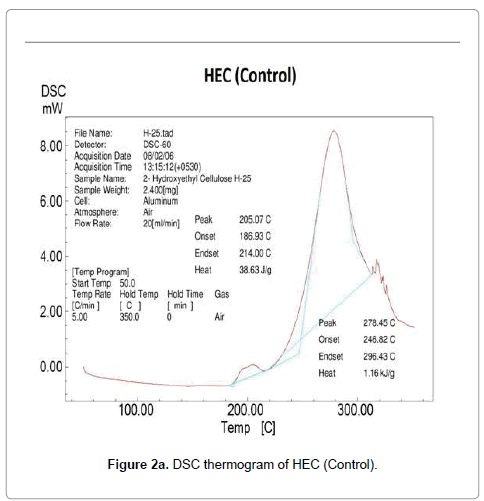 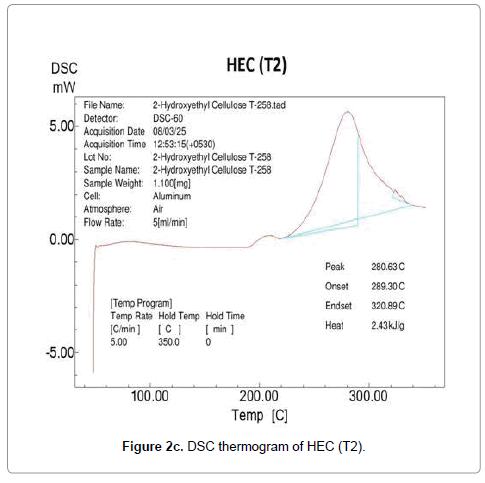 Based on this result, we hypothesize that the biofield is directly acting upon the molecules and restricting the segmental motion in the amorphous region thereby elevation in glass transition was observed. Paradkar et al. showed that high glass transition of polymer, promotes stability and restricts drug diffusion and recrystallization during storage; further the melt viscosity of the polymer make it suitable for hot melt extrusion processing [9]. This confirms that treated HEC (T1 and T2) polymer might be suitable for the DDS. The HEC polymer (T1 and T2) showed an increase in melting temperature (279°C and 280°C) reflecting improved thermal stability of HEC after biofield treatment. 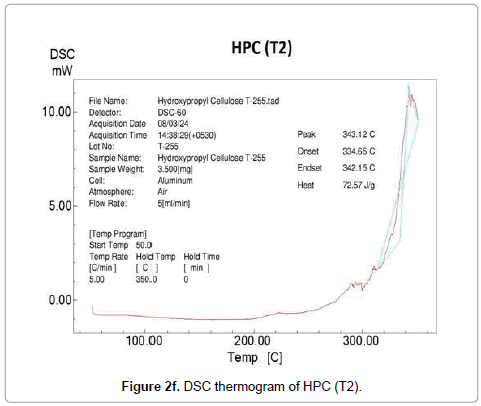 The thermogravimetric analysis is a technique to investigate the thermal stability of the polymers. TGA thermograms of HEC control polymer and treated sample are shown in Figures 3a-3d. TGA thermogram of control HEC polymer exhibited one step thermal degradation pattern (Figure 3a). Control HEC started to decompose at 240°C (initial decomposition temperature), and it stopped at 330°C.The HEC control polymer lost 43.61% of its original weight during this process. The treated HEC polymer (T1 and T2) displayed identical single step thermal degradation process. The polymer (T1) started to lose its weight at 252°C and ended at 305oC. The initial decomposition temperature (IDT) was increased in the treated HEC (T1) polymer (252°C) (Figure 3b) which showed its higher thermal stability. However the initial decomposition temperature was decreased in HEC (T2) sample (232°C) (Figure 3c). 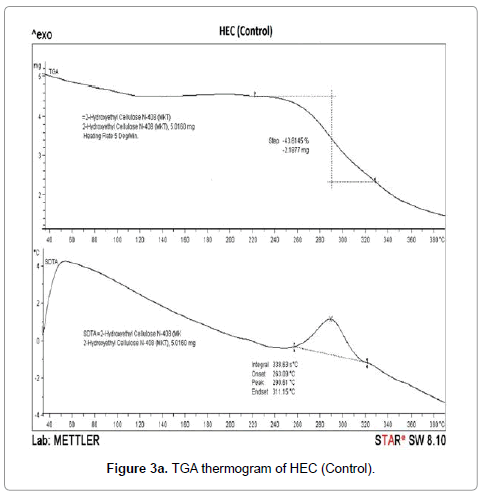 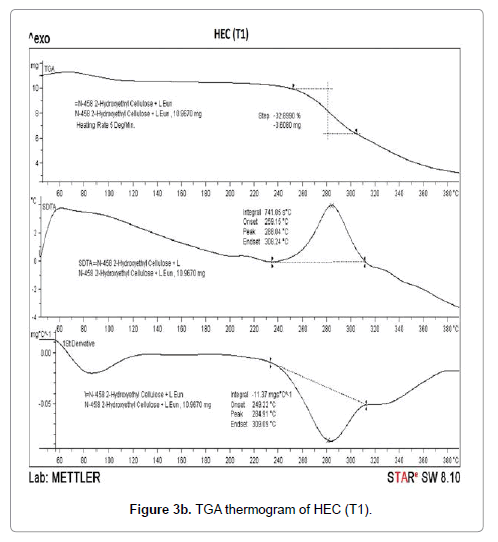 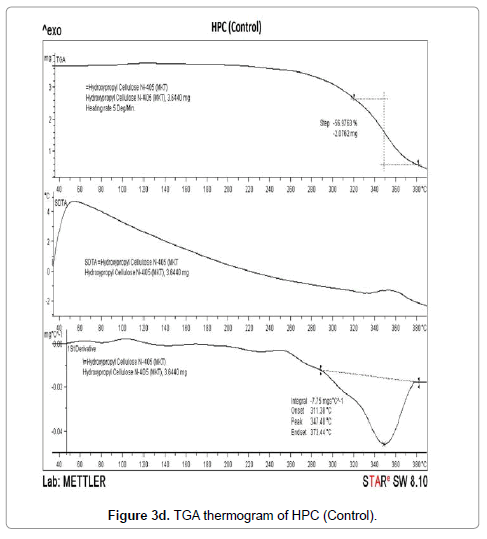 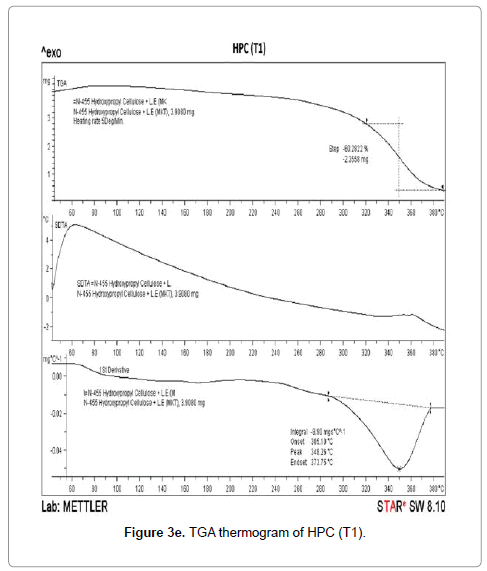 The CHNSO results confirmed significant increase in percentage oxygen and hydrogen of treated HEC and HPC polymers as compared to control samples. We presume that substantial increase in hydrogen and oxygen elements in the polymers (HEC and HPC) might have improved the hydrogen bonding. The strong hydrogen bonding may increase the crystallinity and thermal stability of the polymers which we have observed in treated HEC. Moreover the treated HEC had shown increased glass transition temperature as compared to control that might improve the drug stability in gastro retentive drug delivery and effectively reduce the premature drug diffusion from the matrix. Hence these results confirmed that treated polymers (HEC and HPC) could be an interesting candidate for oral targeted DDS. Furthermore, a few experiments are required to investigate the potential of biofield treated polymers (HEC and HPC) in DDS.

Mr. Trivedi’s biofield treatment had substantially improved the physicochemical properties of HEC and HPC polymers. XRD showed that treatment with biofield had significantly enhanced the crystallite size by 835% in treated HEC as compared to control and possibly this increased the crystallinity. It was presumed that enhanced crystalline indices in treated HEC caused increase in crystalline size. DSC showed the increase in melting temperature of treated HEC and HPC as compared to control polymers. It was postulated that biofield treatment probably assisted the formation of long range order in crystal of polymers (HEC and HPC) which increased the melting temperature and thermal stability. CHNSO results showed substantial increase in percentage hydrogen and oxygen which confirmed that biofield had possibly induced structural changes in the treated polymers (HEC and HPC). Thermal analysis by TGA showed significant improvement in thermal stability of treated HEC (T1) and HPC (T1) as compared to control. ‘We hypothesize that biofield treatment probably caused changes at structural and atomic level due to weak interactions in the polymers. Based on the results the treated polymers could be used as a matrix for oral targeted DDS

The authors would like to thank all the laboratory staff for their assistance during the various instrument characterization. We thank Dr. Cheng Dong of NLSC, Institute of Physics, and Chinese Academy of Sciences for permitting us to use Powder X software for analyzing XRD results.