Copyright: © 2014 Eltweri AM, et al. This is an open-access article distributed under the terms of the Creative Commons Attribution License, which permits unrestricted use, distribution, and reproduction in any medium, provided the original author and source are credited.

Background: Previous studies have shown that postoperative adverse events after colorectal resection predict a poor prognosis with early cancer relapse. The aim of this study was to report the outcome of patients undergoing esophagogastric resection to assess the influence of in-hospital factors on long-term cancer survival. Specifically, a standardized definition of complications was applied to this cohort and mortalities within the first 90 days were excluded from the analysis in order to remove any bias this would have.

Methods: Retrospective review of 304 patients undergoing curative esophagogastric resection for carcinoma during the period May 2003 to August 2011 at our institution. Minimum follow-up of 12 months was required; patients not surviving 90 days were excluded from the multivariate analysis.

Conclusions: Patients experiencing postoperative morbidity can expect the same long-term oncologic outcome as those not suffering these early setbacks.

Although there have been improvements in the perioperative care of patients undergoing surgery for esophagogastric carcinoma, 50-60% will suffer postoperative complications [1]. Technical complications, in particular anastomotic leak and infectious complications, notably nosocomial pneumonia account for the majority of these postoperative adverse events. While the development of these complications is associated with a threefold increase in mortality rate, the majority of patients are managed successfully, but have a prolongation to their period of hospitalization [1].

Large studies reporting on patients with colorectal carcinoma undergoing resection have identified a deleterious effect of anastomotic problems on longterm cancer survival [2,3]. These studies reported a 20% absolute reduction in overall five year survival, from 65% to 45% for patients suffering anastomotic leak compared to those not experiencing this adverse event [2,3].

A number of smaller studies have examined the potential relationship between perioperative outcome and cancer relapse [4-16], in patients undergoing esophagogastric resection. The findings have been conflicting, with seven of 13 studies reporting a significantly poorer longterm survival for those suffering postoperative complications compared to their counterparts, while six studies failed to identify a significant difference in survival. Only four of the studies employed a standardized definition of complications. Further, six of the seven studies reporting significant findings included patients experiencing in hospital mortality in the analysis. There is the potential for this to confound the interpretation.

The aim of the current study was to ascertain whether the longterm survival of patients experiencing postoperative complications after esophagogastric resection differed from patients with uneventful postoperative courses. Complications were defined by applying a validated, standardized classification (Clavien-Dindo) [17]. In order to avoid the bias of potential confounding early mortality, patients not surviving the first 90 days were excluded from the analysis.

The study population was patients undergoing resection for esophagogastric carcinoma at the University Hospitals of Leicester during the time May 2003 to August 2011. Patients were identified from the prospectively maintained Multidisciplinary team meeting records. Electronic and paper patient case records were retrieved and the following information extracted: demographic characteristics, neoadjuvant and adjuvant chemotherapy, operative details, postoperative course, resection specimen histology, the need for reintervention, length of hospital and intensive care unit stay, outcome according to most recent follow up. Patient follow up was reported to date of death or February 2013, meaning that the minimum follow up interval was 18 months.

Postoperative complications were graded according to the Clavien- Dindo classification [17]. UICC stage was determined from the resection specimen histology. Stage 0 denoted a complete pathological response. Institutional approval for the study was granted by the University Hospitals of Leicester Clinical Audit and Effectiveness team. Patient consent was not a requirement.

Continuous data were compared using the student’s t-test, while comparison of proportions was by the X2 test. Survival was calculated by the Kaplan-Meier method, with comparisons by the log rank test. Cox regression analysis was conducted using forward variable selection. The data analysis software package SPSS version 19.0 (Chicago) was employed. Significance was assumed at the 5% level.

The selection process for study population and patient characteristics are summarized in Table 1. The 30-day and 90-day mortality rates were 22/304 (7%) and 28/304 (9%) respectively. The causes of these early deaths were taken from hospital records or death certificates for out of hospital deaths. The causes included anastomotic leak (8 patients); pneumonia (7 patients); cardiac failure, myocardial infarction or pulmonary embolism (5 patients); multi-organ failure (4 patients); non-pneumonia sepsis (3 patients), and bleeding (one patient). These patients have been excluded from the subsequent analysis.

After excluding the 90 day mortalities, on multivariate analysis, UICC was the only independent factor significantly linked to survival (p<0.001), Figure 1. Neither the occurrence nor the grade of complication was significantly associated with survival after oesophagectomy and gastrectomy (Figures 2 and 3). The relative risk of mortality among the patients experiencing postoperative complications compared to those not experiencing complications was 1.0 (95% confidence interval 0.9- 1.2), p=0.41. 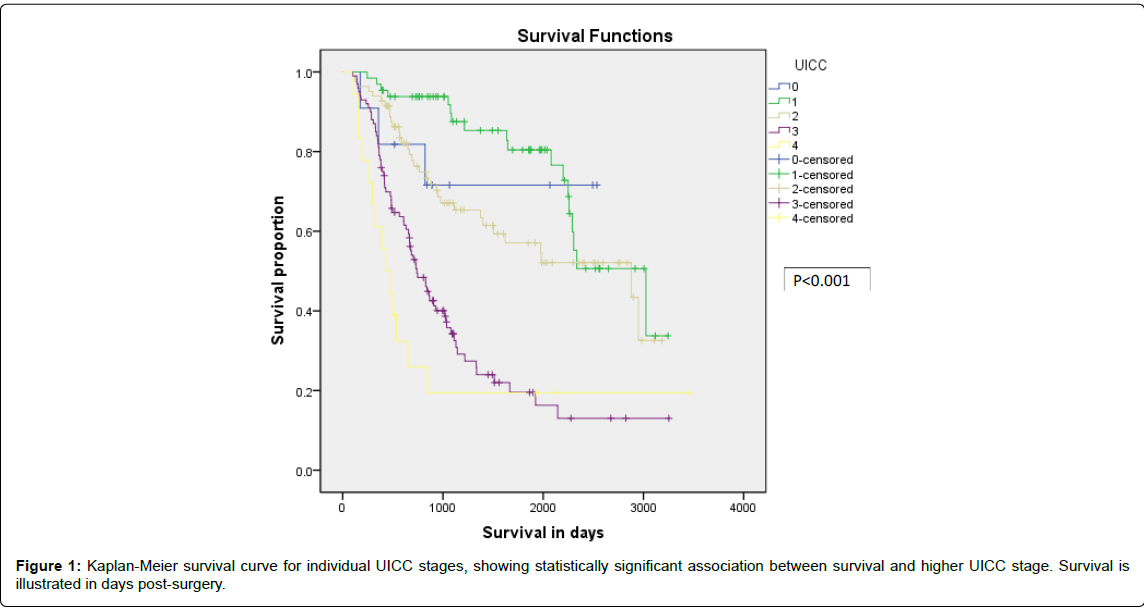 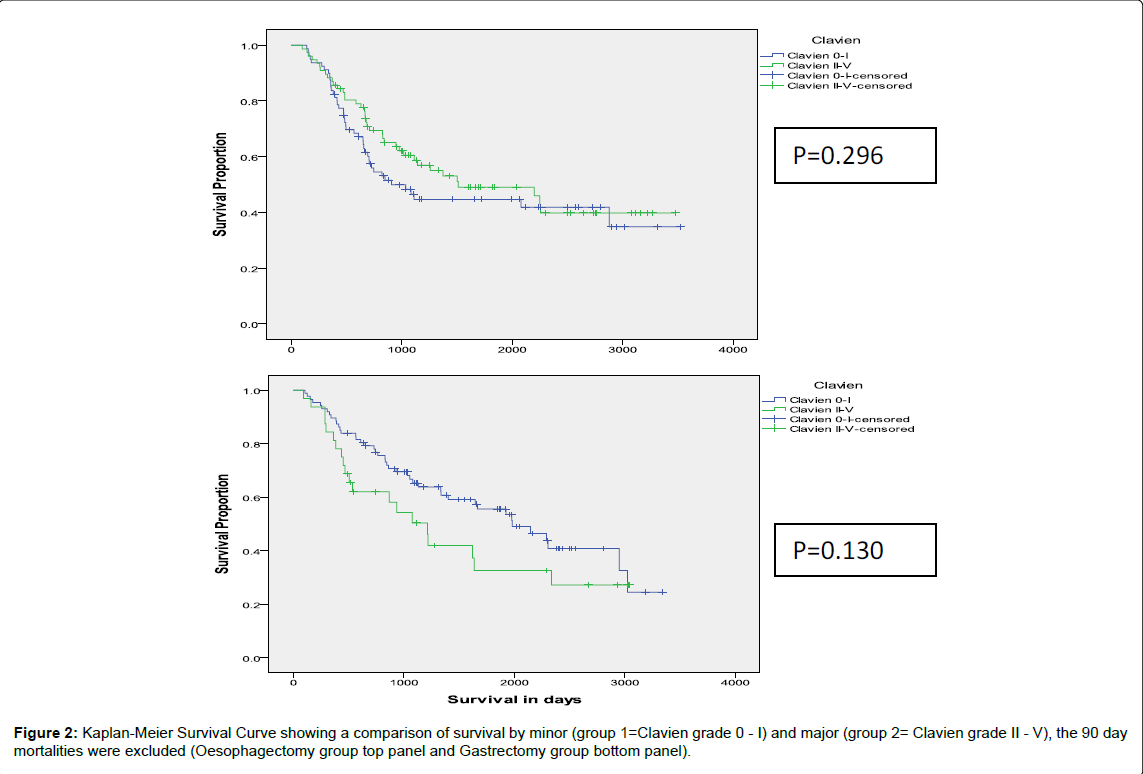 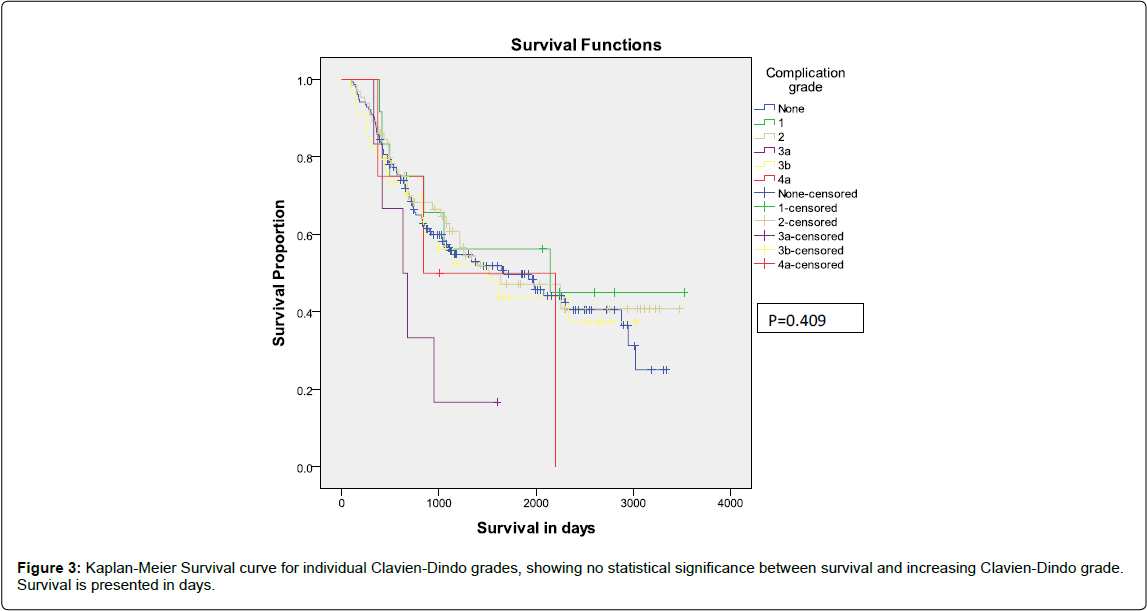 When the analysis was repeated including the 90 day mortalities, the occurrence of a postoperative complication was significantly associated with a shorter survival with a relative risk for mortality in the group experiencing complications compared to those not experiencing them of 1.6 (95% CI 1.3-2.1), p=0.002.

Since then, a further 12 reports have evaluated the relationship between postoperative complications and cancer survival after esophagogastric resection [1,5-7,9-12,16,18-21] (Table 2). Many of the studies included early postoperative mortality in the analysis. In the current study, when early mortality (within 90 days) was included in the analysis, a statistical correlation was noted between complications and overall survival. The studies reporting on the association between anastomotic leak and outcome in patients undergoing colorectal resection specifically excluded early deaths. For six of the seven studies reporting significantly poorer survival included early mortality in the analysis. Of the five studies that excluded early mortality from the analysis or performed analysis with and without this subgroup, only one reported a convincing association. The one remaining study by Rutegard et al. failed to identify an association on univariate analysis, but noted a weakly positive multivariate analysis, with a hazard ratio of 1.3 [11]. This coupled with the evidence from the current study suggests that, if there is an association between postoperative complications and early cancer relapse, the magnitude of the effect is at best small. As identified in the current study, it seems likely that UICC stage is the most powerful predictor of survival and that all other factors pale into insignificance by comparison.

The potential mechanism by which any effect might be exerted remains unclear. The most popularised views include the assertion that complications, notably those that require further intervention result in a state of relative immunosuppression. Other theories contend that patients suffering complications are more likely to require blood transfusion and that this is known to exert an immunosuppressive effect. A further potential mechanism is that, if cancer relapses develop from bone marrow derived progenitor cells, increased local permeability and aggregation of these cells will occur at sites of any inflammatory response. Lagarde et al. identified chylothorax as carrying the greatest hazard ratio [25]. This is appealing given the potential immunological consequences of lymphocyte and protein depletion, which occur with chyle leaks. The current study did not examine the influence of specific complications, although when these were divided into Clavien grade of complication, there was no trend evident.

The classification of postoperative complications becomes increasingly important as clinical outcomes comparisons become embedded in the quality assurance of the healthcare process and system. Ensuring that analogous information is collected between centers requires robust definitions of complications. In 1992 Clavien proposed a classification system for postoperative complications based upon the level of intervention required to correct or ameliorate the complications. The same group subsequently modified the classification in 2004 and validated its applicability to a large cohort in 2009. This grouping allows meaningful comparisons to be made between centers and between different surgical specialties [17]. Six studies have employed the Clavien-Dindo classification to report complications after esophagectomy or gastrectomy [18-20,27-30] (Table 3). The reported frequency of complications range from 51-70% for esophagectomy and 25-40% for gastrectomy.

In conclusion, this study demonstrated that patients who suffer postoperative morbidity can expect the same long term survival outcome among those survived the 90 days postoperative period, and the only survival predictor was the UICC stage. Employing the Clavien- Dindo classifications of surgical complication is an ideal method of reporting postoperative complications and will allow accurate worldwide comparison of these postoperative setbacks.