Chinese Chlorella is natural algae seafood is widely used as a food substitute. Treatment of localized cancer cells by natural photosensitizer drugs extracted from herbs received intensive improvements with very high demands. Fractional hemolysis of the red blood cells incorporated with Chinese Chlorella in vitro has been reported. Continuous and delayed photohemolysis at different concentrations and different irradiation times were investigated. The samples irradiated with high-pressure arc lamp of intensities 58.07 J/cm2 ± 1.45 and 64.21 J/cm2 ± 1.98. The power dependent parameters of the relationship between time required to rupture 50% of the cells (t50) with different concentration and different irradiation time are found to be 0.63 ± 0.06 and 3.38 ± 0.17 respectively. These results suggested that, Chinese Chlorella could be one of the natural potential drugs in photodynamic therapy.

Tumor treatment with natural photosensitizers received intensive improvement in the last decade. One of the main improvements is the development of the photodynamic therapy (PDT), which is a treatment for localized tumor using combination of light and light sensitive agents (photosensitizer). Upon radiation interact with the photosensitizer at a specific wavelength; it undergoes energy transition from ground state to excited state, then through intersystem crossing to triplet state. Energy transfer to proximity molecule such as oxygen and create an excited singlet state. The singlet oxygen is a very reactive chemical species which react with DNA and cause cell killing. Chinese Chlorella is a natural algae sea food collected from very deep regions in the oceans which contains over 300 times the beta-carotene of a carrot, and other key vitamins, minerals and essential amino acids. Chinese Chlorella is very important in cancer fighting whereas 50 percent of cancers are associated with poor diet. It has been found by Jitsukawa et al. that a swelling is followed by erythematopurpuric lesions on sunexposed areas of the body developed in five patients ingested Chlorella pellets. The photosensitizing agent contained in Chlorella pellets was proved to be pheophorbidea and its ester [1].

Recently cancers are spreading and threatening many people overall the world. The main causes of many types of cancers are not known yet and there is no practical or effective remedy for this disease. The main cure of this disease is surgical or/and chemotherapy which could produce a significant risk to the human body. Another new method of treatment for certain types of local cancers is called Photodynamic Therapy (PDT), which uses a photosensitizer that reacts to light. PDT is based on a combined action of visible light and photosensitizing drugs that localized in tumors. Light exposure to samples contains photosensitizer causes a series of chemical reactions resulted in the destruction of red blood cells membranes and release of the hemoglobin.

Oxygen molecules in their metastable singlet delta state are believed to be the species that destroys cancerous cells during PDT in many clinical trials such as for bladder, brain, skin and other cancers.

Two factors are required for the new photohemolysis approach; natural extracts and light dose. Chinese Chlorella was chosen to be the natural extract which contains a sensitive pigment to light and high pressure arc lamp with about 60 J/cm2. In our search work, Chinese Chlorella was sensitized in erythrocytes and diluted in phosphate buffered saline (PBS) with pH=7.4. The relationship between the drug concentration and the time required to rupture 50% of the RBCs (t50) was studied and found that the dependence of delayed photohemolysis on the sensitizer concentration and fluence can be expressed empirically by the equation

Where k is constant, C is the sensitizer concentration, and p is the power dependent parameter (AL-Akhras, (2006) [2]).

The objective of this work was to investigate photosensitization of Chinese Chlorella as a natural drug substitution for PDT. It has been selected in this work due to it is high sensitivity to temperature and high capability of absorption light.

Chinese Chlorella in the form of capsules of blue green algae extracts were used as a photosensitizing agent. The pellets were grinded and diluted into PBS. Absorption spectrum with maximum peak at 675 nm is shown in Figure 1. 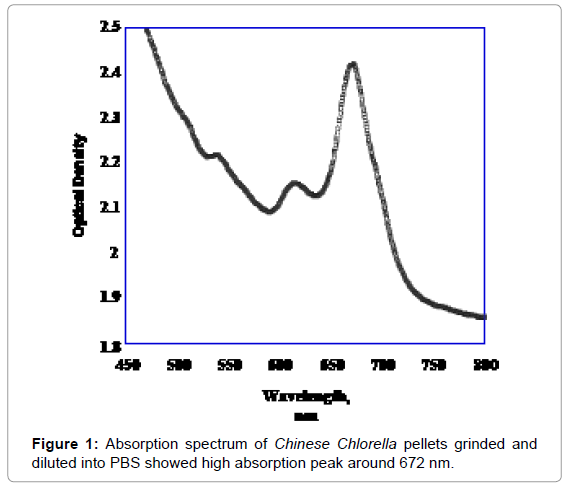 Fresh red blood cells from healthy donor were used in this research work. Red blood cells (RBCs) were isolated by centrifugation at 1500×g for 8 min at room temperature. The supernatant, which contains plasma and the buffy coat, was decanted, and the pellet was resuspended in pH 7.4 (PBS). This process was repeated until the supernatant was clear [2].

Sample preparation: the samples are a mixture of RBCs plus Chinese chlorella (CC) as a photosensitizer drugs in PBS, pH 7.4). The samples were incubated for 30 min at 370°C with gently shaking every 10 min. to allow the drugs penetrate the RBCs membrane. Samples with different concentration and different irradiation times are prepared as follows:

The broad-band light source used for Photohemolysis measurements was a 200-W high-pressure Hg/Xe arc. The exposure light source was filtered by a Corning C.S. No. 0-52 filter (>360 nm) and 2 cm of water. The water filter was placed between the light source and the sample to reduce heating. A stirrer with small magnet inside the cuvette was used to keep the sample homogenous and permit all RBC to receive the same light dose. A hyperdenmic needle was inserted into the sample through a plastic cover to maintain oxygen saturation. The sample was placed in a cuvette holder with external controlled water circulation around the sample to keep the RBCs at the desired temperature. Incident fluence rate at the exposure site was about 60 J/ cm2 as measured by FiledMaxII Laser power/Energy Meter/Coherent/USA. The distance between the samples and the light source was 17 cm, and appropriate spot size to cover the sample area was focused and collimated by a convex lens.

The points in Figure 2 show a typical set of continuous Irradiation curves for Chinese Chlorella irradiated with 64.21 J/cm2 arc lamp. The dependence of 1/t50 versus the concentration C for all continuous irradiation measurements correlates with the power law ln (1/ t50)=k+p*ln C Figure 3. The power dependent for this set of runs is p=0.63 ± 0.06. These results are in good agreement with earlier studies for Photofrin p=0.62 and Sodium Hypericin p=0.54 [3]. 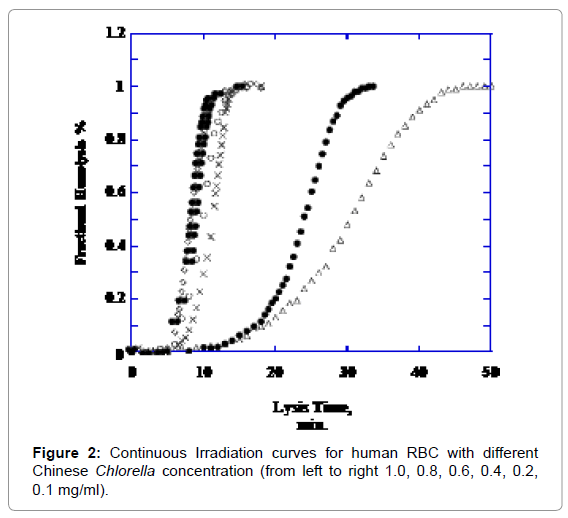 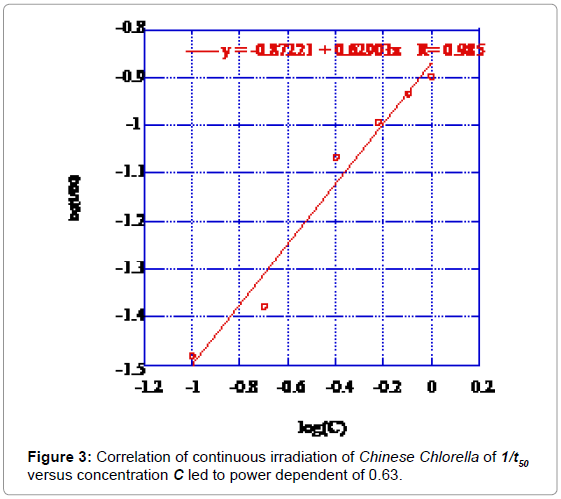 Figure 3: Correlation of continuous irradiation of Chinese Chlorella of 1/t50 versus concentration C led to power dependent of 0.63.

Figure 4 represents a typical sigmoidal curves of fixed concentration Chinese Chlorella C=0.1 mg/ml irradiated with 64.21 J/cm2 at different irradiation times (16 min., 14 min., 12 min., 10 min., and 8 min). Figure 5 showed dependence of 1/t50 versus the irradiation times for all delayed photohemolysis measurements correlates with the power law 1/t50=a(t)p. The power dependent p=3.38 ± 0.17 is in good agreement with our previous findings [4]. Figure 6 showed a typical delayed photohemolysis curves with constant concentration C=0.4 mg/ml irradiated with 58.07 J/cm2 and different temperatures (37, 28, 19, and 12°C). Figure 7 the Arrhenius plot for temperature dependence of delayed photohemolysis with temperatures led to an activation energy of 5.85 ± 0.05 kcal/mol which are in consistent with our previous findings [2]. The relative steepness S=1.21 ± 0.03 for this set of runs is comparable to continuous irradiations (data not shown). Further investigations are still needed to end up with more accurate mathematical modeling such as those reported previously [2,4-6]. 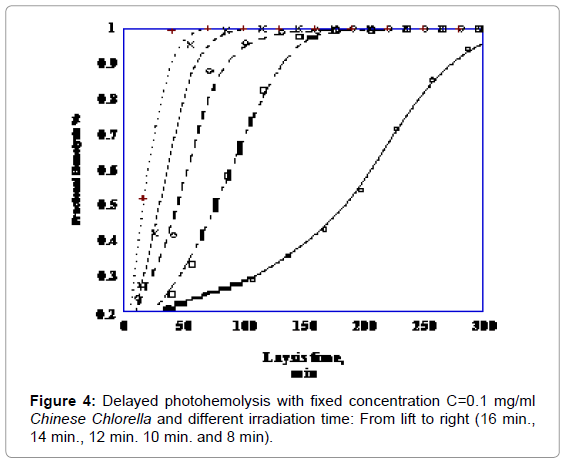 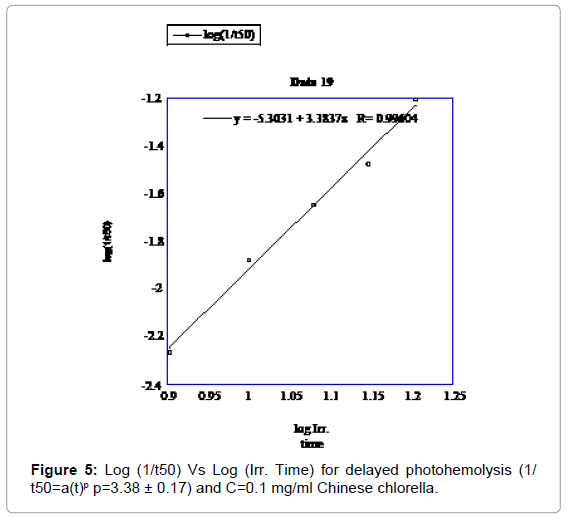 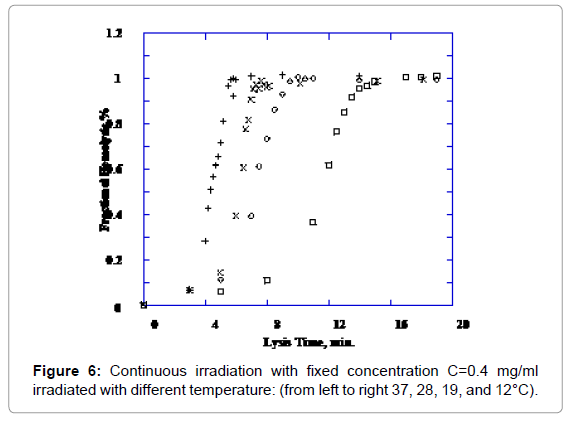 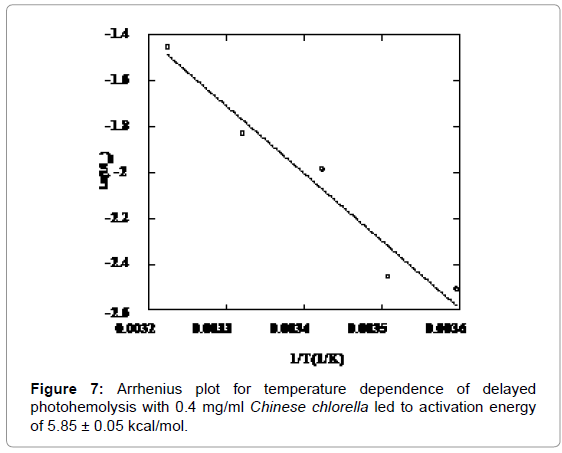 – Hemolysis time is inversely proportional to temperature at constant concentration.

– The time required to rupture 50% of the cells t50 increases with decreasing the drugs concentration.

This work was funded by the Higher Council for Science and Technology/ Jordan, grant # 62/2000 and Deanship of Scientific Research at Jordan University of Science and Technology (JUST). The investigators would also like to express his gratitude to Dr. Khalid Aljarrah, G. Makhadmeh and M. ALshorman for the valuable discussions throughout this work.

Copyright: ©2013 Al-Akhras MAH, et al. This is an open-access article distributed under the terms of the Creative Commons Attribution License, which permits unrestricted use, distribution, and reproduction in any medium, provided the original author and source are credited