Evaluating the Photosensitivity of the Chinese Chlorella on Red Blood Cells

Cancer is one of the most spreading diseases that threatening people life. Because cancer is a stochastic disease, its controlling is a challenge, and the treatment is a puzzle with hard probabilistic methods, though research in this field is still in needs for more progress. The cure for this disease can be surgical in some cases while in most cases it needs other treatment modality as radiotherapy, brachy therapy, chemotherapy etc. However, all these treatments have side effects on the human body, which must be accounted for [1-3].

Another method that used to treat cancer was the photodynamic therapy (PDT). It is a treatment method that uses light-sensitive drug to destruct malignant neoplasm. A chemical reaction occurs when the drug got exposed to light. The reaction generates free radicals which causes the destruction of cancer cells in which the drug is concentrated. Chinese Chlorella is a unicellular green algae and fresh water Eukaryote. It has been used widely as a nutrition tablets which provided over-thecounter by pharmacies [4]. It is a photosensitive drug which has the ability to penetrate and bind to the RBCs and RBCs entities [5].

In this work we used two different approaches to study the effect of Chinese Chlorella on the RBCs photohemolysis according to the way of irradiation:

I- Continuous photohemolysis: lysis of RBCs occurs during irradiation.

Typical sigmoid curves for photohemolysis of RBCs in the existence of the Chinese Chlorella are usually analyzed to find power dependent parameters of the relationship between time required to rupturing 50% of the cells (t50) and different concentrations as well as irradiation intervals (10,11,15,16). The curves represent the fractional hemolysis response of red blood cells to the CC were fitted to the logistic function define by

Where t is the time of irradiation for delayed photohemolysis and a is a proportionality constant [6-10].

Chinese Chlorella (CC) pyenoidosa in the form of tablets manufactured by Holland and Barrett, Ltd. (USA) was used. Strong absorption peak in the visible light region was found around 675 nm for the CC. Specimens were exposed to light using a high pressure arc lamp with about 95 Watt/cm2.

The broad-band light source used for hemolysis measurements was a 200-W high-pressure Hg/Xe arc. The lamp was housed in an Oriel Research Arc Lamp Housing model: 66903, with Oriel Digital Arc Lamp Power Supply model: 68907. For samples irradiation, the light source was generated from a 1.5 inch Oriel Research Arc Lamp Housing, (Copyright © 1996-2008 Newport Corporation) with an output power of (50-500 W) and light output intensity 200 W/cm. The samples were located at 21 cm from the light source and the output intensity reached the samples was about 95 Watt/cm2 as measured by Filed Max II Laser Power/Energy Meter/Coherent/USA. Suitable spot size to completely cover the area of sample was created with convex lens at a distance of 21 cm with an intensity of 95 Watt/cm2.

SHIMADZU 2450 UV-VIS spectrophotometer/JAPAN was used for estimating the absorption rate by calibrating the UVVIS spectrophotometer to read 100% transmittance at 670 nm for phosphate buffered saline (PBS) solution and comparing the intensity of transmitted beam through a reference sample (PBS) with transmitted beam through the test sample (our sample) which is detected by photomultiplier for each sample. The intensity difference between the two beams represents the absorption rate.

In this study, In vitro photohemolysis of RBCs contain CC are exposed to direct dose of light in two cases: continuous and delayed time irradiation. CC reacts with light to transform from singlet state to triplet state (unstable state) which will react with oxygen producing singlet oxygen or reactive oxygen species (ROS) or radical readily reacting with electrons rich biomolecules like unsaturated lipids, amino acids and DNA. This reaction destroys the cells.

Photohemolysis of red blood cells mixed with the CC was studied and analyzed by two techniques: Continuous irradiation and Delayed irradiation.

The fractional hemolysis of the RBCs for continuous irradiation with different concentrations of Chinese Chlorella at fixed temperature of 43°C, 37°C, 26°C, 20°C are shown in Figure 1. For each temperature, the hemolysis response to the Chinese Chlorella at concentrations of (1.0, 0.8, 0.6, 0.4, 0.2, 0.1 mg/ml) is shown. The fractional hemolysis data were fitted to the logistic function given by equation 1. For all figures, the dots represent the experimental values while the smooth lines show their best fit to the logistic function. Note that, all curves show a rapid increasing in the fractional hemolysis as a function of time up to saturation which indicates that all cells were killed. Relative steepness for lysis curves (S) is defined as t80/t30 where t80 is the time required to 80% lysis of cells and t30 is the time required to 30% lysis of cells. The relation between the t50 and the concentration C was found to follow the power law 1/t50=aCP. To evaluate this relation, the log(1/t50) versus log (C) were plotted and shown in as an inset in each figure. The power dependent parameter p was calculated for all temperatures and it is found that this parameter is ranging from 0.62 to 0.94. Comparing the value of the power dependent with other photosensitizers (photofrin that analyzed by the same method with p=0.575), CC represents a good candidate for the use in photodynamic therapy as photo-sensitizer.

Figure 2 shows the photohemolysis curves for constant concentration C=0.4 mg/ml irradiated with a light of intensity 95 Watt/cm2 at different temperatures. Curves represent the temperature dependence from left to right: 37, 28, 19, 12 and 5°C. It is clear that the t50 is inversely proportional to the temperature which means that increasing the temperature of the sample speeds up the killing rate of RBCs. 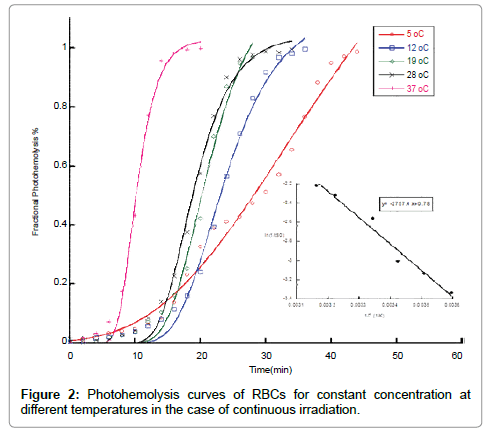 Figure 2: Photohemolysis curves of RBCs for constant concentration at different temperatures in the case of continuous irradiation.

For further analysis of the temperature dependence of cell killing, the Arrhenius equation has been applied. Arrhenius equation is described as K=Ae-E/kT, where K is the activation rate which is described by steepness of the killing curve, A is constant; E is the activation energy; k is the Boltzmann constant, and T is the absolute temperature. The inset in Figure 3 illustrates the relationship between in (1/t50) and (1/T). The slope of the curve represents (-E/k) from which the activation energy can be calculated. Our measurements showed that this quantity is equal to - 2757.4 and hence the activation energy is found to be 7.62 kcal/mol. which is considered a low value. This value indicates that the contribution of temperature in killing RBCs in our experiment is weak and the killing process is dominated by the effect of the added CC [11]. 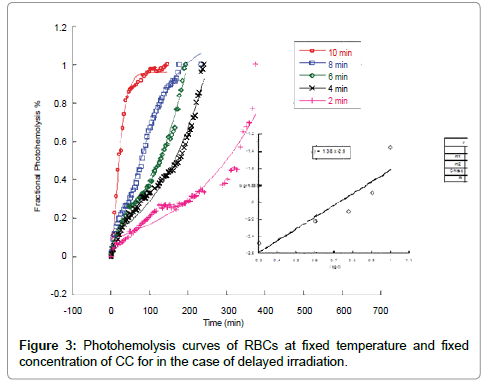 Figure 3: Photohemolysis curves of RBCs at fixed temperature and fixed concentration of CC for in the case of delayed irradiation

In all of the previous experiments, the irradiation of the samples was continuous within the period of taking measurements until maximum hemolysis is reached. However, for the case of delayed irradiation, the samples were irradiated for a specified period and then the light source as well as the oxygen injection was blocked before starting measurements.

RBCs hemolysis response to the CC for delayed irradiation at a fixed concentration of CC of C=0.6 mg/ml irradiated with 95 Watt/ cm2 is shown in Figure 3. The sets of curves represent from left to right the response to the delayed time of 10 min, 8min, 6min, 4 min, and 2 min. It is clear that decreasing the irradiation period results in a slow killing process compared to the continuous irradiation case. For example, the average t50 in the case of continuous irradiation was about 20 min while in the case of delayed irradiation the t50 was about 150 min. This variation in the t50 is expected to affect the conditions of the experiment which will be reflected on the final results

The dependence of 1/t50 on the irradiation times for all delayed photohemolysis measurements are shown in inset of Figure 3. The correlation with the power law

In this study, in vitro photohemolysis of RBCs contain CC is exposed to direct dose of light in two cases: continuous and delayed time irradiation. For continuous photohemolysis at fixed temperatures and different concentrations, the increase in the concentration of CC results in a singlet oxygen or (ROS) which raise death of cells and this is clear from the decrease in t50. The obtained average power dependent p = 0.79 and the relative steepness of curves (S=1.38) is almost independent of CC concentration. The fractional hemolysis rate b increases with increasing CC concentration.

For continuous photohemolysis at different temperatures and fixed concentrations the fractional hemolysis ratio of the parameter a decreases with increasing temperature while the fractional hemolysis rate of the parameter b increases with increasing temperature. The relative steepness of curves in this case is S=1.43. The activation energy was calculated and found to be E=7.62 kcal/mol. This value of energy is considered low to kill cells since activation energies of about 140 kcal/ mol were obtained in the temperature range 43°C-47°C. Photohemolysis curves in our experiments show a direct proportionality between the temperature and the speed of killing process.

In the delayed photohemolysis process, an increase in the irradiation time results in an increase in the singlet oxygen or the ROS which will interact with cells and finally result in swelling and rupturing of cells. As a result, the t50 will decrease. The power dependent in the case of delayed photohemolysis was found to be p=1.38 ± 0.39. Mathematical modeling of Gompartz function fitting showed that the ratio parameter a decreases with increasing time of irradiation, and the rate parameter b increases with increasing time of irradiation. The relative steepness of curves is almost independent of the time irradiation and found to be S=2.35.

Copyright: ©2014 Alzoubi FY, et al. This is an open-access article distributed under the terms of the Creative Commons Attribution License, which permits unrestricted use, distribution, and reproduction in any medium, provided the original author and source are credited.