Isolation of Marine Bacteria From Visakhapatnam Coast For Degradation of Oil

Copyright: © 2016 2017 Kiranmai MR, et al. This is an open-access article distributed under the terms of the Creative Commons Attribution License, which permits unrestricted use, distribution, and reproduction in any medium, provided the original author and source are credited.

Marine waters are the receivers of many wastes from different sources such as food waste, raw material extraction, recreational use, waste disposal and transportation. In addition to this ship trafficking and industry releases enormous amounts of oil and grease to waters. The aim of the present study was to isolate bacterial strain from marine waters of Visakhapatnam coastal area in order to a strain suitable for the degradation of oil and grease. Many bacterial strains were isolated including Aeromonas hydrophilia, Bacillus cereus, Bacillus subtiles, Enterobacter aerogenes, Escherichia coli, Proteus vulgaris, Pseudomonas aeruginosa, Salmonella typhimurium, Staphylococcus aureus. The results showed that the degradation of oil and grease was possible by the application of extracted bacterial isolates. In our study, Bacillus cereus was identified as an efficient degrader of oil and grease compared to other isolates. This study helped to identify native marine bacteria from the polluted site which can be potentially used in biodegradation process of oil and grease.

Oceans are the sinks for the pollutants traveled through several sources such as rivers, streams, coastal restaurants, industries and inland transportation. Some of these sources are the contributors of oil wastes. As oil forms a layer on the surface of the ocean waters, it makes a hindrance of sunlight, oxygen for aquatic flora and fauna [1-3]. It is therefore of high interest to develop rapid and reliable tools for the analysis and monitoring of the fractions of oil or hydrocarbons. Physical and chemical methods like volatilization, photooxidation, chemical oxidation, and bioaccumulation [4] are rarely successful in rapid removal and cleaning up oil or hydrocarbons and also these methods are not safe and cost effective when compared to microbial methods. Crude oil sources are important energy resources used by industry and in our daily life. At the same time, crude oil products is a major pollutant of the environment [5]. Due to its complicated composition, it has the potential to elicit multiple types of toxic effects. Up to now there have been many reports concerning the role of marine microorganisms active in degradation of pollutant oil [6]. Oil products many contain molecules called hopanoids which were observed in bacterial cell wall [7,8] indicating biodegradation to some extent. Degradation of crude oil by naturally occurring bacterial population converts complex and hazardous substances into simpler and nontoxic forms which can be easily removed from the environment [1,9]. Some of research work related the degradation of hydrocarbons by microorganisms in different coastal regions [10,11], there are no available data on the degradation of hydrocarbons using microorganisms isolated at the region of the Visakhapatnam coast of Bay of Bengal. Moreover, there was no information about the distribution of marine microbes through the coastal line. The aim of the present study was to identify marine bacteria potentially useful for the degradation of oil and also to assess the occurrence and the distribution of these marine bacteria.

Marine water samples were collected aseptically in a clean and sterilized container from three stations (station 1: ship trafficking, station 2: leakage of oil near harbour, station 3: restaurant oil waste release] covering about 1 km stretch through the harbour coast Visakhapatnam. The collected samples were immediately sent to the laboratory in an ice box for bacteriological examination [12] and analyzed physicochemical parameters [pH, temperature). 25 samples were collected at a stretch of 3 Km. Each sample was stored at 4°C prior to examination.

The pure strains of marine bacteria were isolated from the collected marine samples. 5.0 ml amounts of each marine sample were taken in a series of 250 ml Erlenmeyer flasks containing 45 ml of nutrient broth (Merck) and incubated at 35°C for 24 hours at 200 rpm in orbital shaker [13]. After incubation one loopful of each bacterial culture broth was inoculated on the nutrient agar plates and incubated in 35°C for 24 hours. The obtained bacterial colonies were sub-cultured on a fresh nutrient agar plats using similar procedures to get pure cultures.

The obtained pure cultures were tested for gram positive and gram negative bacteria through Gram’s staining. Then biochemical studies were conducted for the confirmation of bacterial species.

In our study the bacterial strains were identified as Aeromonas hydrophilia, Bacillus cereus, Bacillus subtiles, Enterobacter aerogenes, Escherichia coli, Proteus vulgaris, Pseudomonas aeruginosa, Salmonella typhimurium, Staphylococcus aureus. All these species were identified based on the biochemical features showed in Table 1. One of the physicochemical parameter showed a significant role in the degradation abilities of bacteria.

pH played a very significant role in the biodegradation of bacteria on oil. In our study this was clearly noticed that the oil degradation was determined to happen at pH range of 6.5, 7.0, 7.5, and 8.0 respectively, where as insignificant degradation was observed at the pH range of 6.0, 5.5, 5.0 and 4.5 pointing towards the less survival of the cells. The degradation of oil depends on the presence of active bacteria in the sample. Ahmad et al. [13] stated that for an efficient bacterial bioremediation process minimum 105 CFU/ml of cell concentration is required. According to Nwuche and Oghonna [14] high oil concentration in low water availability and low pH decreases the bacterial activity. Similar conditions were identified in station 2 of the study area.

In case of samples collected from sampling stations 1 and 3 maximum degradation was achieved at pH 7.5 (Figure 1). The degradation of oil at different pH [7.0-8.0] increased or decreased. The degradation might be attributed to the variation of oil structures due to low or high pH values that would influence non-living degradation process according to Leahy and Colwell [1]. 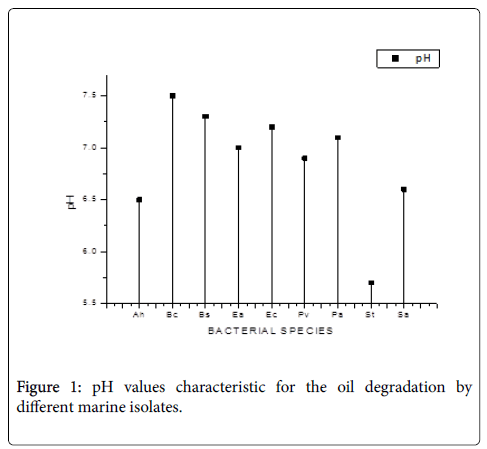 Studies by Verstraete et al. [15] revealed that increase in pH fro 4.5 to 7.5 increased the bacterial capacity for biodegradation. However, the degradation capacity of the bacteria gradually decreased with increased pH above 9 of pH scale [16,17].

Table 2: Showing the degradation of oil with time period.

The present study determined the potential application of bacteria on the removal of oils in a cost effective and eco-friendly manner. The skill of native bacterial isolated from marine environment in the breakdown of oils would be advantageous and reduces the usage of normally expensive complex and synthetic growth medium. In our study it was identified that Bacillus cereus showed 62% of degradation of crude oil compared to other isolated strains. So, Bacillus cereus can be considered as potential oil degrader. Therefore, more studies are required to carry out in this line for better results of using native bacteria as an efficient tool for biodegradation of oil and related products.