Copyright: © 2017 Ijiri T, et al. This is an open-access article distributed under the terms of the Creative Commons Attribution License, which permits unrestricted use, distribution, and reproduction in any medium, provided the original author and source are credited.

Background: Scapular stability is important for shoulder movement; however, the mechanism of scapular stability remains unknown. In addition, activities of scapular muscles have been only evaluated during shoulder elevation, but not extensively observed those of other shoulder movements. We investigated muscle activity, including scapular muscle activity, during horizontal abduction and adduction of the shoulder joint.

Methods: Eighteen healthy men without orthopedic or neurological abnormalities participated in this study. Muscle activity was measured during horizontal isometric abduction and adduction of the shoulder joint in the sitting position. Measurements were conducted in three positions horizontal adduction at 0°, 45° and 90°, and external loads were set at 3, 5 and 10% of each subject's body weight. External load was added to the direction of horizontal abduction on horizontal adduction task and the direction of horizontal adduction on horizontal abduction task. Surface electromyography was used to collect raw data during the task. Based on scapular movements during shoulder motion, the measured muscles were classified as agonist muscles of the glenohumeral joint, and agonist and antagonist muscles of the scapulohumeral joint.

Conclusion: Most scapular muscles engage during isometric contraction, and the high activating muscles were changed by the direction of shoulder movement. We have to evaluate the scapular muscle activities individually in consideration of this finding.

Eighteen healthy men without orthopedic or neurological abnormalities participated in this study. Subjects were excluded from this study if they had the experience of shoulder and neck disease or had the pain during the task of this study. And subjects were also excluded if they done hard physical exercise within one week. The mean anthropometric characteristics ± standard deviations (SD) were age: 25.3 ± 2.3 years, height: 168.8 ± 4.8 cm, and weight: 60.7 ± 6.7 kg. The subjects were provided with informed consent and agreed to participate in the study.

Muscle activity was measured during isometric horizontal abduction and adduction of the shoulder joint in the sitting position with the trunk fixed to a backrest by a hard, thick rubber band. Because muscle activity changes with angle, measurements were performed at three angles. The external load was set at three weights in order to evaluate change with different loads. The measurement positions were configured at 0°, 45° and 90° of horizontal adduction (Figure 1). A goniometer was used to check the angles. The examiner added the external load to the direction of horizontal adduction on horizontal abduction task and the direction of horizontal abduction on horizontal adduction task. The external load was set at 3, 5 and 10 percent of each subject's body weight (3%, 5% and 10%). These loads were predetermined in a pilot study on maximum muscle strength measurements at low, middle, and heavy weights. The external load was added at the distal humerus with a handheld-dynamometer (MOBIE, SAKAI medical Co, Japan). The angle and weight order was randomly set for each subject. Each angle and weight pattern order was numbered, and the subject selected the number uninformed. The subjects practiced each weight trial before the measurement. 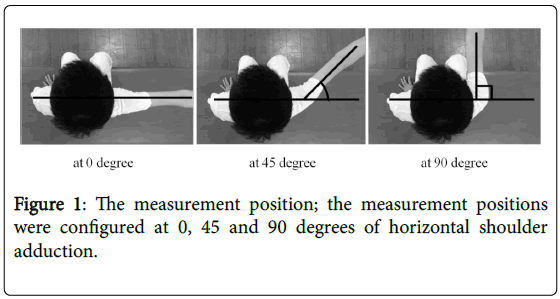 Surface electromyography (EMG; MQ-8, Kissei comtec, Japan) was used to collect raw EMG data during the task. EMG was reported in five seconds and the signal was recorded at a sampling rate of 1,000 Hz. The EMG was recorded with electrodes (LECTRODE, Admedec, Japan) at an interelectrode distance of 20 mm.

Crosstalk was minimized by careful placement of suitably sized electrodes parallel to the muscle fibers, based on standard anatomical criteria. The target muscles were the pectoralis major and posterior deltoid, as the GHJ muscles, and the middle and lower trapezius and serratus anterior, as the STJ muscles on the dominant side. The EMG electrode position was set according to previous studies by Basmajian et al. [19] and Kibler et al. [20].

The EMG data were analyzed using analysis software (BIMTUSVIDEO, Kissei comtec, Japan). The integrated EMG (IEMG) was obtained for 3 s in the stable wave during each task and counted per second. The IEMG per second was normalized by the IEMG of the arm at 0° of horizontal adduction. Relative-IEMGs were used for statistical comparison of each load in the same muscle. The Friedman test was used to determine whether a load condition had a statistically significant effect on relative-IEMG for each muscle. Tukey’s post-hoc analysis was then applied for specific comparisons among the three loads and to determine individual effect differences. The level of statistical significance was set at P<0.05, unless otherwise noted. 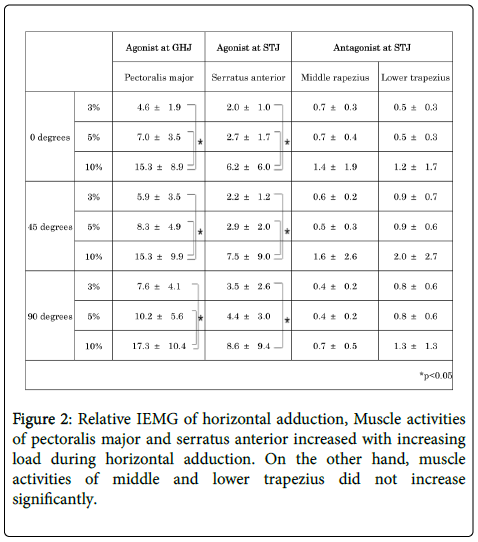 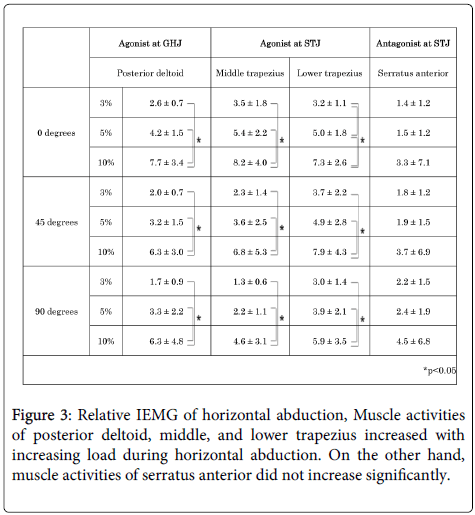 There are some limitations to this study. First, due to the assessment of horizontal adduction and abduction under three loads and at three angles, the number of measurements was comparatively large. The measurement order was random and, therefore, unbiased. However, fatigue was not excluded completely. And the sample size was not perfect. So, we have to investigate again with a lot of subjects. Although the results of muscle activities did not show a statistically significant difference on antagonist muscles of STJ at each load in this study, statistical significance might have been evident with a greater sample size. The numerical value of antagonist muscles activities of STJ tends to increase with increasing load, and, therefore, caution is warranted in interpreting the results. Finally, we have to investigate with more perspectives to find out the scapular stability. In this study, we examined only the activation of scapular muscles, did not analyze the scapular movement. It was not enough to conclude about the function of scapular muscles. So, investigations with more perspectives are necessary for clarification about the mechanism of scapular stability and the function of scapular muscles.