Copyright: © 2017 Yin D, et al. This is an open-access article distributed under the terms of the Creative Commons Attribution License, which permits unrestricted use, distribution, and reproduction in any medium, provided the original author and source are credited.

Objective: To explore the methods for the repair of large-area limb skin avulsion wound. Method: Eleven patients with simple limb skin avulsion underwent large-area stereotypy full-thickness skin graft for wound repair. Results: Wounds were repaired very well as well as the late appearance and functions were satisfactory in all 11 patients. During follow-up, the hypertrophic scars were mild, the recovery of joint function was good, and no severe complications occurred. Conclusion: Appropriate timing and skin for the repair of wound was the key to reduce postoperative dysfunction after simple limb skin avulsion. Large-area stereotypy full-thickness skin graft in wound repair had the advantage of improved skin survival rate, good appearance and function of the limb.

Large-area limb skin avulsion refers to the skin tear up to 1%-49%, is a complicated injury in modern trauma surgery [1,2]; most avulsions are attributed to wheel rolling in traffic accident or machine rolling, and characterized by acute damage and severe condition. This makes it very difficult to treat large-area limb skin avulsion [3,4] and an inappropriate treatment may cause severe complications, such as soft tissue necrosis, secondary infection and even physical disability [5]. The recovery of the patient’s limb function, as well as future life quality and degree of disability is directly affected if a successful wound repair was done in time. It is important to consider, how to repair the wound and reduce hypertrophic scar with minimum cost [6,7], and also maximize the preservation of the appearance and function of the injured limb [8]. In the current study, 11 patients were treated from May 2005 to May 2014 at the hospital and the treatment was satisfactory.

A total of 11 patients, 8 male and 3 female, mean age 30.5 years (16-48 years) were included in this study. Injury site was upper limb in 4 cases and lower limb in 7 cases. The cause of injury was: 4 cases of traffic accident, 5 cases of machine rolling and 2 cases of other reasons. The avulsed skins were broken or missing, and could not be used any more.

Large-area avulsion patients had huge injury area, severe condition, intense pain and excessive bleeding, and usually complicated with hypovolemia and vulneralis shock. Therefore, these patients need to undergo anti-shock therapy immediately after admission, such as transfusion, infusion and analgesia, which could correct the patients’ shock and maintain effective circulating blood volume. Meanwhile, arterial bleeding could be stopped by ligation with hemostatic forceps and thread. Small arteriovenous bleeding could be stopped by electric coagulation, and extensive errhysis should be prevented by pressure dressing.

Once the vital signs became stable, a complete debridement was performed immediately under general anesthesia: the limb and avulsed tissue wound was washed with water, soft brush and soap water repeatedly, to remove silt, oil or other contaminants completely. Wound was washed 3 times with hydrogen peroxide solution, Bromogeramine and saline. The wound and surrounding area within 15 cm were disinfected with Anerdian twice, and then draped. Injured skin, deep fascia, blood vessels and muscle tissue were resected completely in the wound, especially the damaged fat tissue and the ruptured important tendons and nerves were repaired as far as possible. Based on the blood supply in the avulsed tissue, avulsed skinflap was prepared and used for in-situ suture. Healthy avulsed soft tissue should be used as much as possible to reduce wound surface. Topical fibroblast growth factor was sprayed on the wound surface, which was covered by xenoskin and 5 layers of gentamicin saline gauze, and followed by appropriate pressure dressings and bandages. According to the wound errhysis, dressing change was done every 3-5 days. Anti-infection and nutritional support was provided after surgery. About 15 days after surgery, the wound became smooth and flat, and a delayed skin graft was prepared.

Under general anesthesia, the head, back, thigh and wound were disinfected twice with iodophor. The granuloma in the wound was removed with a scalpel, and the laminae basalis were retained. The wound was then washed with normal saline, and covered with normal saline gauze for the surgery. Based on the wound surface, the size, shape and full-thickness of skin was labeled on the back or thigh. A subcutaneous and head subcutaneous injection of 1:4,00,000 epinephrine hydrochloride saline was used in the labeled sites. The head razor-thin graft was resected with a Humby knife, and the skin graft was placed in normal saline for grafting. The head wound was covered with Vaseline gauze and sterile pressure dressing with bandages was performed. Large stereotypy full-thickness skin from the back or thigh was removed with a scalpel, the wound was dressed with the razor-thin graft, and pressure dressing was carried out. Fullthickness skin was placed on the limb wound surface, and subjected to counterpoint interrupted suture with the wound skin flap. Graft was covered with Vaseline gauze, gentamicin saline gauze and sterile dressing was performed with pressure bandages. Injured limb was elevated and the limb joint was fixed. Enhanced anti-infection and nutritional support was provided.

On Day 6 after surgery, first dressing change was performed and possible bleeding, effusion under the skin graft and skin graft movement was managed. After dressing change on Day 12 post surgery, all 21 cases of skin graft survived, and some survived skin graft surfaces had scattered blisters, which were drained with a needle. Two cases of necrosis in the skin flap recovered after clearance and dressing change. The color of skin graft, the sensation, elasticity and hair growth were normal after 1 to 3 years of follow up and with no obvious hypertrophic scar, the limb appearance and joint functions were good as well.

The patient was a 46 years old male. He was treated in 3 hospitals due to avulsions in right upper extremity by large chainsaw rolling, and was asked to undergo amputation, however, the patient declined. The patient was then transferred to the hospital 8 h after injury. The physical examination on admission showed: a large-area skin amputation with partial muscle, blood vessel and nerve damage in 1/3 right upper extremity to right hand back, the avulsed skin was missing (Figure 1). After admission, the patient underwent intravenous infusion and anti-shock rescue immediately, such as oxygen inhalation, blood transfusion and infusion. Once the patient’s vital signs were stable, complete debridement was performed under general anesthesia. The obvious necrotic skin, subcutaneous fat, deep fascia, blood vessels and muscle tissues were removed; partial repair and anastomosis of the important ruptured tendons, nerves and blood vessels were also performed. Topical fibroblast growth factor was sprayed on the wound, and next the wound was covered by xenoskin and gentamicin saline gauze sequentially, and pressure dressing was performed with dressing and bandages. The dressing was changed every 4 days. Anti-infection and nutritional support was provided after surgery. Twenty days after debridement (Figure 2), the wound surface was smooth and flat. With large-area stereotypy full-thickness skin graft under general anesthesia for the repair of wound (Figure 3), the skin graft survived after surgery, the limb appearance was satisfactory and the limb function recovered as well (Figure 4). Following eight months of the skin graft (Figures 5 and 6), and after 1 year of follow-up, the repair efficacy was improved (Figures 7 and 8). 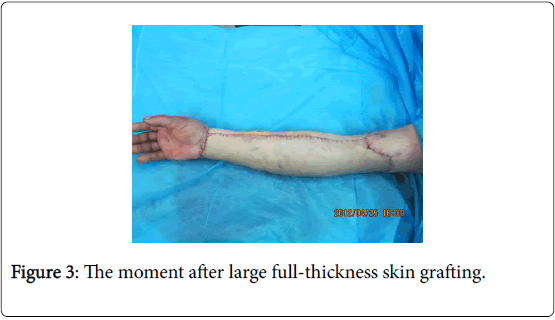 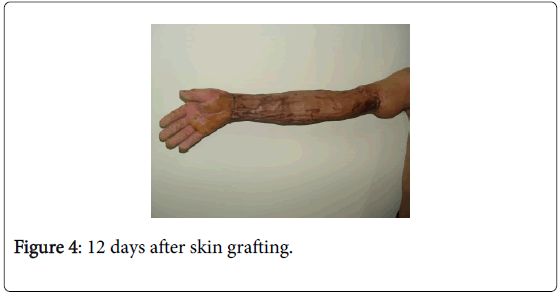 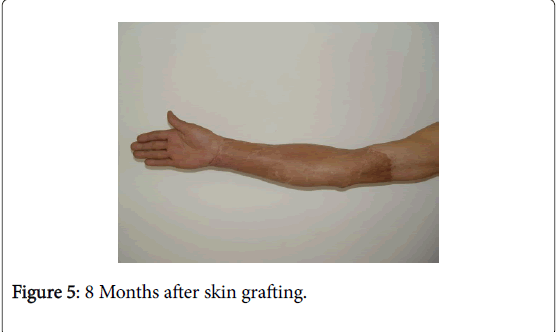 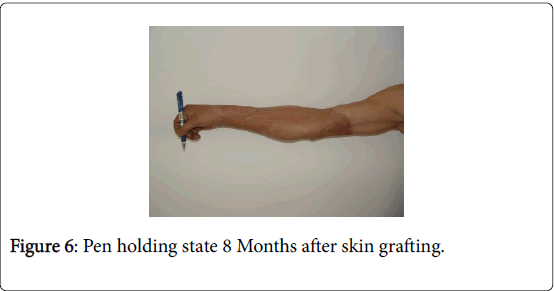 Simple large-area skin avulsion is not to be treated differently however, to repair the wound with minimum cost, to promote wound healing as soon as possible, to reduce hypertrophic scar, to retain the limb functions and appearance was worthy of consideration [8,9]. In this study, large-area stereotypy full-thickness skin graft in delayed repair of wound achieved desired efficacy.

Large-area stereotypy full-thickness skin graft had following advantages: the skin grew continuously without any interruption and no hypertrophic scar occurred after the large-area skin graft. The hypertrophic scar in the skin flap was mild. The skin accessory organs, including sweat glands and sebaceous glands were retained and had normal functions. More importantly, after skin graft survived, the skin color was close to normal, the skin texture was soft and elastic, the sensation and hair growth was normal, the joint function was good and the appearance was satisfactory. After long term follow-up, the efficacy was recovered [10].

• Fewer complications: no tourniquet was required in the second skin graft and the surgery was more vigilant. The limb nerve damage caused by a long tourniquet period was absent.

• Low incidence of subcutaneous hematoma and high survival rate of the skin graft: Errhysis and bleeding points could coagulate spontaneously after pressure dressing of first surgery. The incidence of subcutaneous hematoma was lower and the survival rate of the skin graft was higher after second surgery [12].

• Fewer surgeons were required: The first surgery was emergency surgery, thus required several surgeons to perform debridement and skin graft, this was difficult in emergency. Number of surgeons required could be decreased and thus increases the number of scheduled surgeries to be performed.

• The wound was more smooth and flat: The necrotic tissues and parabiotic tissues, which were not debrided completely, could be cleared and re-constructed by the body spontaneously through increasing surgeries. After removal of the fresh granulation tissues on the wound surface, the flat and circulation-rich laminae basalis could be the foundation of skin graft survivor and good-looking appearance of the survived skin.

Exercise of limb functions: For the treatment of large-area skin avulsion, surgery was the only one treatment method and functional recovery was the final purpose [13]. The functional exercise in limb recovery period should be combined with the patient’s psychological characteristics. As the injury is an accident, the patient may become pessimistic, negative and anxious because of pain as well as due to multiple surgeries and dressing changes. Tolerant and thoughtful psychological health care should be provided based on the patient’s psychological state to make him cooperative to achieve earlier recovery.

Prevention is the best cure. Because of skin avulsion injury often causes irreversible damage, any method can make patients recover to pre injury. Therefore, we must strengthen the education of traffic laws and safety knowledge popularization, reduce the occurrence of trauma.

It is very necessary to develop animal models for basic research on the biomechanical mechanism of skin avulsion injury, the regularity of histopathological changes and the causes of secondary necrosis.

In conclusion, large-area skin avulsion may lead to many complications. But with timely and efficacious hemostasis, fundamental therapies including anti-shock, enhanced nutritional support, anti-infection and delayed wound repair, the large stereotypy full-thickness skin graft for the delayed repair of wound could achieve satisfactory efficacy [14]. This therapy is simple, practical, and worthy of clinical application.