Copyright: © 2017 Zhan X, et al. This is an open-access article distributed under the terms of the Creative Commons Attribution License, which permits unrestricted use, distribution, and reproduction in any medium, provided the original author and source are credited.

Carbon fiber reinforced polymer (CFRP) is one of the most important construction materials in civil aircraft manufacturing. In the current paper, effects of laser surface treatment on the surface microstructure of the CFRP are involved. And the influence of laser surface treatment parameters on shear strength and failure pattern are considered. The optimized parameters including laser scanning speed, laser power, frequency and power density are expected to ensure that the resin and all kinds of pollutants on the surface are cleaned. It is indicated that laser power density significantly influences the surface morphology. The surface with continuous and integrated fibers is helpful for adhesive bonding and is acquirable under appreciate parameters. Maximum shear strength (27 MPa) of adhesively bonded joint was obtained after laser surface treatment.

Due to the high strength and specific stiffness, density and small thermal expansion coefficient, and good dimensional stability, composite material especially carbon fiber reinforced polymer (CFRP) composite becomes one of the most important construction materials in civil aircraft engineering [1]. On the other hand, compared to the metal, CFRP composite displays poor impact resistance and low strength between surface layers and substrate which lead to the difficulty in assembly connection of the structure and high technical requirements [2]. Adhesively bonded joints is recommended instead of the traditional riveting joints and welding joints in the aerospace products due to many advantages including improved impact behavior and energy absorption [3], less vibration and sound deadening, good air tightness and an ability of keeping the integrity of the materials [4,5].

Surface condition is an important factor for bonding [6], which affects the strength of adhesively bonded joints significantly [7-19]. Chabot and Bonk [5] investigated adhesive bonding of composite material made by aluminum alloy and stainless steel respectively. The samples surfaces were separately coated on three kinds of adhesive first and then used AF-163-2K adhesive film to bonding samples. Schäfer et al. [15] investigated an atmospheric-pressure plasma jet (APPJ)-based surface treatment for the structural (τB>15 MPa) adhesive bonding of polyamide 6 (PA6) composites and their results showed that APPJ led to an increase in surface free energy, oxygen concentration, and the number of functional groups. Furthermore, the surface topography was significantly modified by exposing to APPJ. Schulte and Baron [16] carried out load and failure analyses of CFRP laminates by means of electrical resistivity measurements. Zhu et al. [17] aimed at designing, manufacturing and testing of two different nonlinear shear connectors made of fiber reinforced polymer composites for the formwork: (1) non-directional, cylindrical shear-cones; and (2) directional, cubical shear-cones with one side beveled.

Material surface can be improved through laser technology. Akman et al. [18] investigated the effects of Nd:YAG laser and 17% EDTA treatment on root-dentin mineral content. Badziak found that the pressure of the shock generated in the plastic layer is relatively weakly influenced by the preplasma and at the pulse intensity of 6510 16 W/cm2 [14]. Bartkowska et al. [19] remelted boronickelized C45 steel by laser surface modification. It can be seen that laser modification improved wear resistance, cohesion as well as low-cycle fatigue of the boronickelized layer. Surface morphology, free energy, oxidation, and roughness of titanium and 316 L grade stainless steel were changed by nanosecond pulsed laser processing conclusion to investigate the surface wettability alteration [16].

With the development of high power laser, laser technology has entered into the field of nonmetallic material surface treatment, and is rapidly developed in recent years [17]. Considering its fast heating and cooling, laser surface treatment can be applied to surface strengthening and coating treatment [18]. By changing laser processing parameters, it can be used to substrate surface melting, ablation [19,20], inducing surface nanostructures [21], and phase transformation strengthening [22]. Ingram et al. [23] studied the optical characterization of carbonnanoparticles (CNPs) synthesized by the laser ablation of solids in liquids technique. However, so far there are few studies on applications of laser pretreatment used in the adhesive bonding process. In the present paper, effects of processing on the surface of CFRP plate and the strength of CFRP adhesively bonded joints were investigated. The purpose of this article is to consider the effect of superficial processing parameters on shear strength and failure pattern, thus filtrating the optimal parameters.

The CFRP plates with T800 carbon fiber embed are used in this study. The CFRP plates contained 8 layers and every two layers are often interlaced. The adhesive used throughout this investigation is E-120 HP. The process parameters and shear strength of E-120 HP can be seen in Table 1. In this thesis, experiment is carried out using an IPG-50 W (1064 nm) laser operated in pulsed mode. The parameters of laser processing are listed in Table 2, and laser spot diameter is 50 μm.

Table 1: The process parameters and shear strength of E-120HP.

Table 2: The laser processing parameters used in this experiment.

Two laser scan directions are used on the CFRP surface which is shown in Figure 1. It should be noted that the process is carried out at room temperature and in atmospheric environment. The geometry of CFRP plate and laser scanning route are shown in Figure 2. Adhesive joints are fabricated using CFRP plates and epoxy adhesives (E-120 HP). Curing is carried out at 20°C for 48 h. The bond line thickness is set to be (t=) 0.2 mm. Prior to the adhesive bonding experiment, the surface of CFRP plates is pretreated by different methods. The adhesive bonding experiments are divided into three classes and samples are cured at room temperature for 48 h. The surface pretreatment process of three classes is shown in Table 3. A single lap adhesively bonded joint is investigated. All the samples are tested in a universal testing machine. The geometric parameters are identified as to be 100 mm, 25 mm, 2 mm (Figure 3). All the tests were conducted at room temperature (approximately 20°C) Three samples are tested for each case of joint configuration. 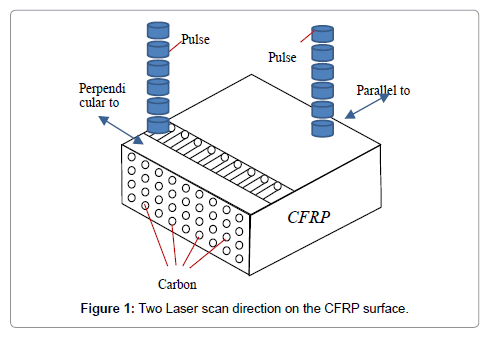 Figure 2: The geometry of CFRP plate and laser scanning route.

Laser treatment on composite surface is a relatively complicated physical and chemical process, results in removing dirt from surface including impurities, resin, etc. The schematic diagram of laser surface treatment is shown in Figure 4. The surface morphologies of CFRP plates are affected by the speed, frequency and laser power density during processing. Figure 5 presents the surface morphologies and the failure proportions of CFRP plates obtained using various parameters of laser treatment. As shown in Figure 5, any combinations of the experimental cases are unable to remove resin and pollutants under power density of 11.46 Kw/cm2. However, all the experimental cases can remove resin and pollutants on the surface under the power density of 22.93 Kw/cm2 and 34.39 Kw/cm2. It is difficult to distinguish the difference of the surface by direct observation; hence quantitative analysis is applied to failure proportions statistics. Figure 5: Macrograph and the failure proportions of laser irradiated CFRP. 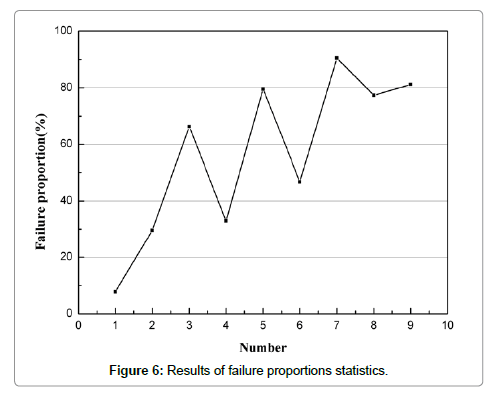 Figure 7: The microstructure (a) is CFRP surface after laser treatment with power density of 11.46 Kw/cm2, (b) are the localized magnifications of (a), (c) and (d) respectively are the partial enlarged detail of (b) and (c). Three different processing methods are applied to the CFRP before the adhesive bonding experiments. Microstructures of CFRP surfaces of the three cases are shown in Figure 10. 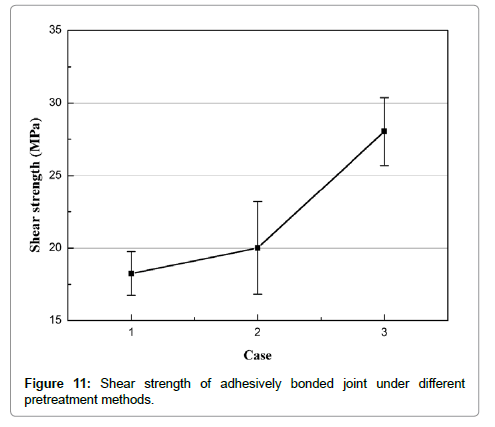 In this paper, the effects of laser surface treatment on the surface of CFRP plate and the strength of CFRP adhesively bonded joints were investigated. The conclusions are given as follows:

• Part of resin and all kinds of pollutants on the surface are cleaned and exposed fibers are found to be continuous and integrated when the laser scanning speed, laser power and frequency are used to be 6000 mm/s, 40%, and 100 KHz, respectively. Experimental results show that power density significantly influences the surface morphology.

• The resin and various pollutants on the surface are totally cleaned after the laser treatment. The exposed fibers appear to be continuous and integrated. The adhesive immerses into the gap between fibers and forms an inconspicuous interface, which causes the improvement in shear strength.

The authors gratefully acknowledge the financial support from the Aviation Science Funds (No.2015ZE52058).