Copyright: © 2016 Sosa ES, et al. This is an open-access article distributed under the terms of the Creative Commons Attribution License, which permits unrestricted use, distribution, and reproduction in any medium, provided the original author and source are credited.

Manure; Soil pollution; Nitrate; Production of the crop and salinity

Mexico has a production of 61 million tons of manure considering only the feedlot cattle and partial barn, where the main basin of this important residue are the Laguna Region, the Juarez Valley and other estimated areas of northern and northeastern Chihuahua [1]. Dairy cattle manure and other organic fertilizers used in agriculture have the potential to be a cost-effective source of nutrients for crops. Land application determines an increase in fertility as well as improved physical properties [2].

The organic waste is accumulated in the places where this waste is generated or applied commonly to score some agricultural land, which can cause degradation of the quality of soil and groundwater [3]. The amount of manure nutrients available in the soil for plants, is perhaps one of the most common questions without exact answer because of the many physical, chemical and biological factors involved in the process of decomposition of organic materials [4]. One of the most precise ways is by evaluating the decomposition of manure in the field directly [5].

The use of this fertilizer is unquestionably beneficial, but there are difficulties to predict its effect in every situation due to the great variability of the material covered and the differences created by the previous management [6]. In this case a classification of the type of material is necessary to predict their nutrient to crops [7] this prediction is important because it may cause environmental pollution when applying excessive doses, either excessive loss from gas losses N (denitrification processes and ammonia volatilization loss as NO3 leaching [8,9].

Producers who use this fertilizer, use it indiscriminately applying a high dose of 200-250 tons per hectare per year, making it necessary to carry out an analysis of the salt balance and soil quality without forgetting that the key is to avoid inappropriate use of a resource to protect the quality of soil and water [10,11].

The fodder produced in the spring-summer cycle, is not enough to feed the livestock during the winter season, this caused the producers to look for alternatives to help them supplement the food supply, both in quantity and quality this season [12].

The Comarca Lagunera is the most important dairy region of Mexico and Latin America. A good alternative that has been used to replace alfalfa as a protein source is growing forage triticale [13]. This is a winter crop, which has been included in the diets of dairy cattle, since this crop brings a high potential for biomass production (10.59 mg ha-1 of dry matter), with adequate nutritional value (16.76% PC), it is also very tolerant to adverse environmental factors.

The Laguna Region is located in the north-central part of the Mexican Republic [14]. This is between the meridians 102° and 104° 47’ 22’ west longitude and 24°22’ and parallel 26°23’ North latitude. The average height above sea level is 1,139 m. It consists of a hilly expanse and other flat where agricultural and urban areas, comprising an area of 4, 788, 750’ve-1 are located [11]. According to Koeppen classification modified by Cervantes. The climate is dry desert or warm steppe with summer rains and cool winters. The average annual temperature is 21°C, with an average annual evaporation of about 2,396 mm [15]. The rainfall is 258 mm [15]. In the region the predominant clay soils are heavy duty, medium sandy loam [15]. Soil type that was used is clay type, which interferes with ground mineralization as reported by Vazquez et al. [15]. This research was conducted in the experimental agricultural field of the Faculty of Agriculture and Animal Husbandry- UJED, which is located at km 28 of the Gomez Palacio-Tlahualilo, Durango road, to nearby Venice ejido, municipality of Gomez Palacio, Durango.

The experiment was conducted in the fall-winter cycle of the years 2008, 2009 and 2010, after planting corn every year since 1978. Initially, since this year the experiment was established with doses of bovine manure of 0, 40, 80, 120 and 160 Mg ha-1 with characteristics shown in Table 1 and further treatment with chemical fertilizer 150-150-0 kg ha-1 of nitrogen, phosphorus and potassium, respectively. These treatments were distributed in field under a randomized block design arrangement in strips, where each group contained three replicates in an experimental unit of eight meters wide by eight meters long with. Statistical analysis was performed with the Statistical Analysis System software package Ver. 9.

After 2004 manure doses were reduced by 50% because it was detected through the soil analysis that the salinity levels increased higher than 4 cm mmhos cm-1 (Table 2). This action was not enough to reduce the salinity to permissible values lower than the 4 mmhos cm-1, so it was decided to plant a crop with total coverage of soil surface and to consume the maximum amount of salts with good yields and high quality of forage mainly with protein content similar to alfalfa but, with less water consumption to make it attractive crop forage for the dairy protein producer in the region. The triticale forage crop is an excellent fodder for milk production livestock in this region, where there are more than 500,000 heads of cattle for this purpose making it the most important dairy region of Latin America. Triticale sowing was carried out since 2008 after planting corn in the summer season, but with absolutely no manure applied in each plot, where the organic fertilizer was applied since 1978. This is how the way to not only have a high protein forage and performance, but also have a forage crop that absorbs as much salts and improves soil quality as well as to take advantage of all the residual nitrogen accumulated in it was sought.

Harvesting took place 110 days after planting, when the crop was in boot stage and about 10% flowering, this was at 1 m2 per experimental unit to determine its performance. The variables evaluated in the soil were: organic matter (OM) with Walkley and Black method [16], Electrical Conductivity extract with resistivity, pH with pH meter extract, and nitrates (NO3) with colorimetric [16]. The variables evaluated on the ground allowed us to determine what the best treatments were. Forage yield and plant height also were measured to evaluate treatments of manure applied.

Table 3: Means for corn yield per year of study. 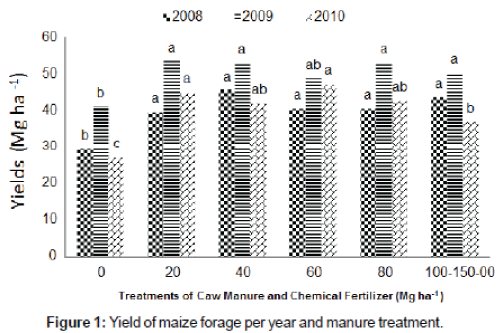 Figure 1: Yield of maize forage per year and manure treatment.

Table 1 shows the soil test before starting the original experiment in 1998. It shows that the ground has normal characteristics of the soils in the region with a low content of organic matter (OM), alkaline pH and low salt Electric Conductivity (EC) less than 4 mmhos cm-1 and very low levels of nitrate (NO3), ammonium (NH4), phosphorus (P2O5), potassium (K+), that had very low fertility to 120 cm depth. Regarding the manure (Table 1 and 2) and after analyzing its features in a pile of accumulation at different depths up to 50 cm, a total range of nitrogen was found from 1.27 to 1.51 with wide variations in other nutrients as; P2O5, K+, Ca2+, Mg2+, Na+, Mn2+, Fe2+, Zn2+, Cu+ and Bo; which allows for a quantitative support to calculate the quantity of nutriment applied when different amounts are added to the soil. This does not mean that these values when multiplied by the dry residue of the plant gives the amount of nutrient available to it, because other nitrogen transformation must be considered such as mineralization, also how much is immobilized, or volatilized and leached so extensive care should be taken to determine the amount of nutrient available for biodegradation of manure after application in soil.

Table 4 shows the chemical characteristics of the soil after application of manure for 9 years in the different treatments of manure at two depths: 0 cm -15 cm and 15 cm - 30 cm, where increased EC, MO, NO3, K+, Ca2+ and Na were observed mainly in treatments from 40 to 160 t ha-1 of manure applied. The average EC levels were higher than four mmhos cm-1 permissible in a farm field and the contents of OM with more than 5% macronutrientlevels over 150 PPM and so with other micronutrients prompting that doses to decline in the following years to 50%. Not finding an acceptable decrease in the concentration of these parameters on the floor it was decided to plant in winter triticale with complete, high soil extraction but without applying manure for three years after planting corn in summer.

Figures 2, 3, 4 and 5 show the average concentration of pH, OM, NO3 and CE for the treatment of manure after planting triticale because with these parameters where found high and very variable concentrations in years prior to 2010. They can be seen as the OM, CE and NO3 decreased to acceptable levels considerably lower than the 4 mmhos cm-1 in EC demonstrating that culturing with full coverage and decreased the dose applied to the soil manure allowed preserve the quality of soil and maintain acceptable fertility to plant any crop. 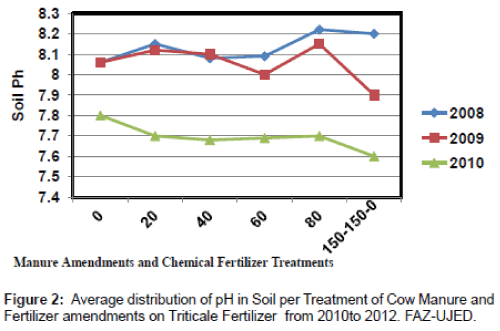 Figure 2: Average distribution of pH in Soil per Treatment of Cow Manure and Fertilizer amendments on Triticale Fertilizer from 2010to 2012. FAZ-UJED. 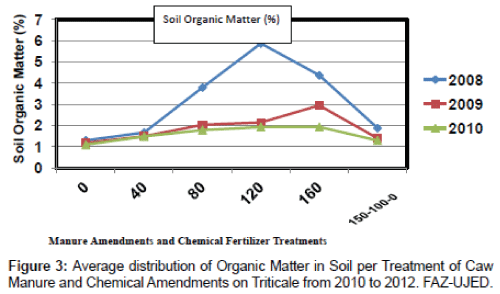 Figure 3: Average distribution of Organic Matter in Soil per Treatment of Caw Manure and Chemical Amendments on Triticale from 2010 to 2012. FAZ-UJED. 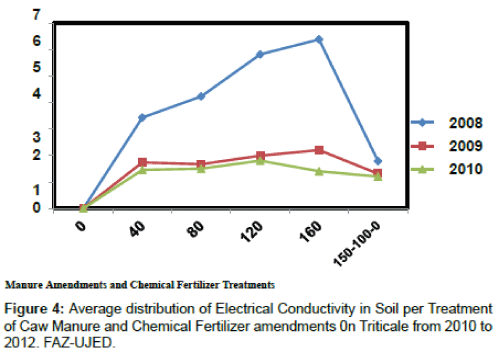 Figure 4: Average distribution of Electrical Conductivity in Soil per Treatment of Caw Manure and Chemical Fertilizer amendments 0n Triticale from 2010 to 2012. FAZ-UJED. 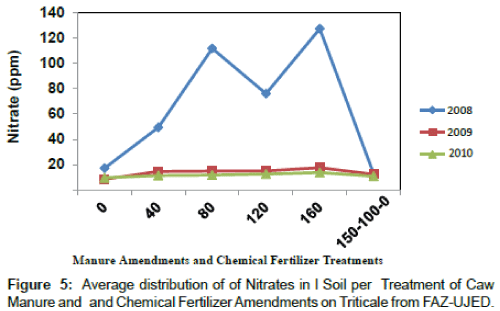 Figure 5: Average distribution of of Nitrates in l Soil per Treatment of Caw Manure and and Chemical Fertilizer Amendments on Triticale from FAZ-UJED. 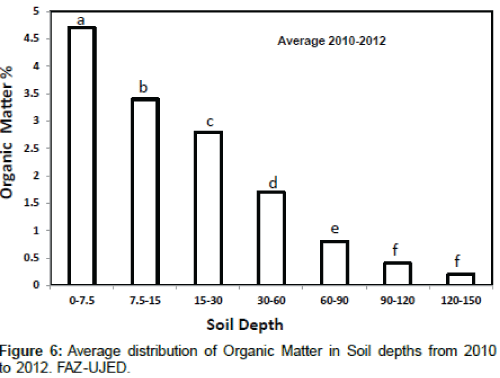 Figure 6: Average distribution of Organic Matter in Soil depths from 2010 to 2012. FAZ-UJED. 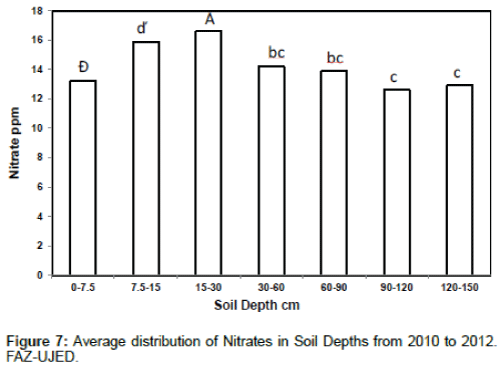 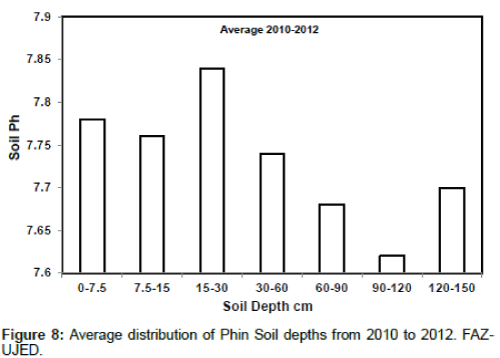 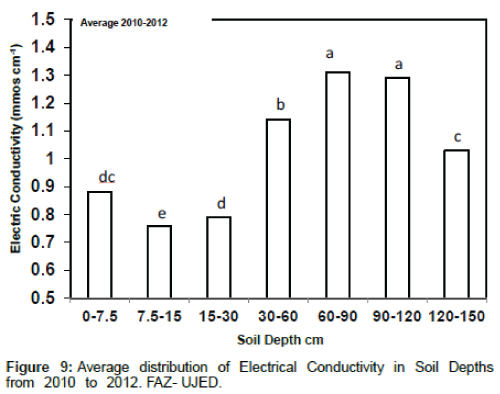 Figure 9: Average distribution of Electrical Conductivity in Soil Depths from 2010 to 2012. FAZ- UJED.

According to the results found, cow manure amendments are important to improve soil crop forage production. However, special care is necessary to maintain good soil quality with respect to salinity and high concentration of nitrates. Triticale forage crops with all soil surfers cover is a good option to take up high concentration of salt and nitrate after several years. In this study, three years after seven applications of cow manure consequently, the soil salinity and nitrate were decreased to lower levels than the maximum permissible of 4 mmhos cm-1 in salinity and less than 20 ppm of nitrates. Triticale forage yields also were higher than 100% in all plots were caw manure was applied than the control and chemical fertilizer treatments. That means that soil must be monitored over time when organic amendments are used to avoid soil pollution due to high mineralization of

organic amendment that induce to more salinity and nitrate concentration in soil mainly. Additionally, soil nitrate and organic matter were higher in the first centimeters of depth (15) due to more mineralization than in the others soil depths decreasing at 150 cm. And because high concentrations of the solubility of nitrate and salt after 30 centimeters were found, soil monitoring of these parameters are important to avoid possible aquifer pollution in the future. Finally, caw manure amendments is a good option for farmers of this and other regions to improve soil quality and crop forage production.