Copyright: © 2014 Simsek, et al. This is an open-access article distributed under the terms of the Creative Commons Attribution License, which permits unrestricted use, distribution, and reproduction in any medium, provided the original author and source are credited.

Ludwig’s angina is a serious, a rapidly progressive cellulitis of the floor of the mouth which, involves the submandibular, submaxillary, and sublingual spaces of the face, it is life threatening if not early recognised and complications like septicemia and asphyxia caused by expanding edema of soft tissues of the neck may occur. A 11- year-old boy referred to, our clinic had tender swelling of the floor of his mouth. Based on his history and symptoms, the diagnosis of Ludwig’s angina was suspected. Infected teeth were diagnosed in oral and radiological examination. The child was treated appropriately by extraction of infected teeth after antibiotic therapy. Many departments may have limited experience of the disease because of its rare occurrence. So, it is important to recognize Ludwig's angina in the earlier stages of the disease.

Ludwig’s angina was firstly described by Wilhelm Fredrick von Ludwig in 1836 [1]. Ludwig’s angina is a serious, life threatening if not early recognised and treated due to septicemia and asphyxia caused by expanding edema of soft tissues of the neck. Ludwig's angina has been occurred more usually in adults than children. Death from this infection is approximately 10% to 17% in the pediatric population [2].

Conventionally, Ludwig’s angina has been more seen in patients with poor oral hygiene [3]. Most of the cases are due to infected lower molars or pericoronitis, which is result of inflammation of the soft tissues surrounding the crown of a partially erupted tooth, most commonly the second or third molar [3]. Although Ludwig's usually develops in immunocompromised persons, it can also develop in healthy individuals. In children, Ludwig’s angina has an identified odontogenic source only 50% of the case, in contrast with the 70% to 90% incidence of odontogenic origin reported in adults [4,5]. Other etiologic sources in children include oral mucosa lacerations [6] submandibular sialadenitis [7] and mandibular fractures [8]. As well as, herpetic gingivostomatis [9] tongue piercing [10] and lymphatic vascular malformation [11] can cause this disease. Ludwig’s angina has also been reported in children with systemic diseases such as immune deficiency and diabetes mellitus [12].

Ludwig’s angina, a rapidly progressive cellulitis of the floor of the mouth, involves the submandibular and sublingual spaces of the face [3]. The infectious process expands superiorly and posteriorly, elevating the floor of the mouth and the tongue. The hyoid bone limits the process inferiorly, and swelling spreads to the anterior aspect of the neck, causing distortion and a “bull neck” appearance [3]. This causes displacement of both the oral tongue superiorly and posteriorly, producing a potentially life-threatening obstruction of the airway at the level of the oral cavity and oropharynx [3].

Patients can have swelling, pain, and elevation of the tongue, malaise, disnea, fever, neck swelling, redness of the neck and dysphagia. The submandibular area can be sometimes with palpable crepitus. The most feared complication is airway obstruction due to elevation and posterior diplacement of the tongue. The fatality rates reported %54 to %60 due to airway obstruction [3]. Needle drainage can be performed to reduce the risk of spreading infection. Microorganisms that cause Ludwig’s abscesses vary but the most commonly cultured organisms are aerobic and anaerobic species, include Staphylococcus, Streptococcus, and Bacteroides species [3].

A 11-year-old boy, have no systemic disease, was referred to our clinic with a complaint of fever and bilateral significant submandibular swelling that rapidly progressed to the submental area (Figure 1 and 2). The complaints started 48 hours ago. According to intraoral examination, he had tender swelling of the floor of the mouth, which was displacing his tongue superiorly and posteriorly toward his palate and posterior pharyngeal wall. He also reported progressive swelling in the neck and inability to open the mouth (Figure 3). He had difficulty swallowing oral secretions and eating, but had no respiratory distress. On physical examination, the child had febrile (38°C) no pain and malaise. Based on his history and symptoms, the diagnosis of Ludwig’s angina was suspected. On panoramic radiograph and radicular infections on both sides of mandibula were observed (Figure 4). First and second primary molars on both sides were planned to be extracted after antibiotic theraphy. He was prescribed intravenous antibiotics of Penicillin G and metronidazole. Figure 1: General view of the face shows swelling over the submandibular, sublingual and submental region. Figure 2: Side view of the patient. Figure 3: Clinical appearance. Swelling of the floor of the mouth. 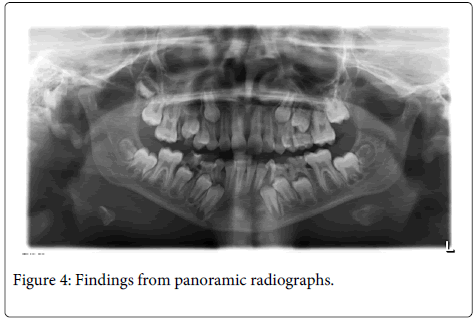 By the 3 day following, his symptoms decreased, he was swallowing more easier. Mandibular left first and second primary molars were extracted. After a week, recovery was satisfactory. Mandibular right first and second primary molars were extracted. At 1 month follow-up, his complaints were fully removed, the wound site healed and no pain or infection was found clinically. The patient continues to be seen at regular follow-up visits. After 6 months, the disease is completely cured (Figure 5-8). Figure 6: General view of the same patient after treatment. Figure 7: Side view of the same patient after treatment. 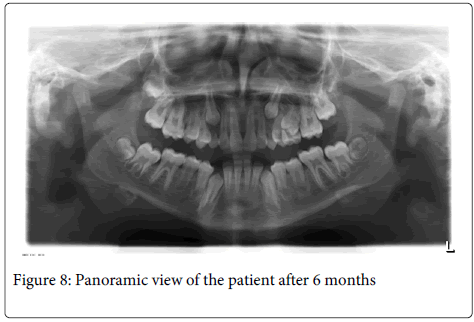 Figure 8: Panoramic view of the patient after 6 months

It seems that Ludwig's angina in the present report caused by the progressive dental infection of posterior deciduous teeth with deep caries. Ludwig's angina in adults is more commonly associated with the permanent mandibular molars [3]. Apices of these teeth may have under the mylohyoid ridges. This results in a close relationship with the submandibular space. It is thought the same relationship may have obtained by the deciduous molar teeth in the present report. Progressive odontogenic infections might have spread to the mandible from the apices of the carious deciduous molar teeth. Thus the submandibular spaces directly affected, subsequently spread the other neighboring tissue spaces.

Early recognition of Ludwig’s angina is important for medical therapy and timely consultation of emergency and surgical services have great importance [13]. Antibiotic selection varies, although a penicilin, clindamycin or metronidazole is frequently used [2]. If a dental infectious source or involvement of the parapharyngeal, retropharyngeal, or mediastinal spaces is found, immediate consultation with the relevant surgical services would be indicated. In the present case parenteral antibiotic [penisilin G] was only prescribed due to local infections.

Larawin et al. observed patients with head and neck space infections from 1993 to 2005. Ludwig’s angina was the most commonly encountered infection seen in 38 [37%] patients. 13 [34%] patients managed successfully with medical therapy and only 4 [10%] patients required a tracheostomy tube [14]. In the present case, patient recovered completely by the way of extractions after antibiotic treatment without any other treatment. Kurien et al. reported 41 patients. They are 24% children and 76% adults. In children, 70% were controlled with conservative medical management while 81% of adults required incision and drainage [15].

Mortality in pediatric tracheotomy usually varies depending on the underlying disease. Mortality rate is higher in a tracheostomy performed on patients under the one age. Fatal complications are usually occurred in the first week. Pediatric tracheotomy related death below 1% have been reported in the literature [16]. This disease is also effective in using steroid. The use of steroid reduce inflammation, the need for artificial respiration and .increases antibiotics penetration [13].

It is important to recognize Ludwig's angina in the earlier stages of the disease to prevent complications. It must not be forgotten that this disease may be seen at children.

Eliminate cause of disease and administrate antibiotics may be sufficient treatment in early stages.

Regular dental care and checkups are essential in the early diagnosis of the disease.