Copyright: © 2015 Okwa OO, et al. This is an open-access article distributed under the terms of the Creative Commons Attribution License, which permits unrestricted use, distribution, and reproduction in any medium, provided the original author and source are credited.

Mosquitoes were collected by human landing catches between February and June 2013 (early wet season) outside houses situated at Iba local council development authority (Iba LCDA) in Ojo local government area of Lagos State, Nigeria. A total of 264 mosquitoes were caught and transferred to bottles containing 70% ethanol and labeled accordingly. Species and sex differentiation was carried out using a dissecting binocular microscope. Morphotaxonomic keys indicated that there were more Anopheles 211 (80%) than Culex mosquitoes 53(20%) and more females 221(84.5%) than males 43(16.2%). However only 29 Anopheles female had bloodmeals (engorged). Malariometric indices as bloodmeal analysis (Human host preference) and sporozoite rate were carried out on the engorged female Anopheles using the Enzyme linked immunosorbent assay (ELISA). 11(37.5%) tested positive for human host out of the 29 engorged females while five (17.24%) tested for sporozoite. The study highlighted that since malaria can be contacted outdoors when bitten control should not be restricted only to indoors. Control Methods like clearing of bushes, gutters, destruction of breeding sites and regular environmental sanitation are strongly advocated in this area.

Mosquitoes are arthropods (Diptera: Culicidae) that transmit parasitic diseases like malaria and lymphatic filariasis. These small insects are biting nuisances. Mosquitoes have long tubular mouthparts for sucking up fluids. The female Anopheles mosquito sucks blood for development and production of its eggs [1]. During this sucking, it transmits malaria parasite.

Mosquitoes exist in almost all places in the world except in ocean areas and arid deserts. Some exist even in Polar Regions in the arctic tundra, lakes and pools [2]. Each species of mosquito selects the situation of the water in which it lay eggs and does so according to its ecological adaptation [3]. Mosquitoes attack people in houses and some prefer to attack people outdoors [4]. Such differences are important because certain ecological differences keep mosquitoes away from humans while some bring them into houses at night [5].

The abundance of Anopheles is the most common entomological measure used to describe the relationship between vectors and malaria [6]. It is important to know the type of mosquito one is dealing with as this is crucial for disease forecasting and monitoring.

This present study looks at Malariometric indices (capacity and ability to transmit malaria) from mosquitoes collected by human bait outside houses in a sub urban area of Lagos, Nigeria. These indices are human host preference by blood meal analysis and sporozoite detection.

Iba Local council development authority is a new area under Ojo Local government. This area stretches over 15 kms with a population of over 5,000 people. The area has congested houses, presence of refuse dumps and open gutters with polluted waters.

The area has several canals. Coastline is muddy, swampy and water logged in the wet season, peak rainfall is from June-October, temperature ranges from 27-34°C throughout the year. Relative humidity is about 78% in wet season and 65% in the dry season.

A dissecting binocular microscope was used for identification of each mosquito. A drop of saline was added to the mosquito on the slide for easier visibility.

The maxillary palps of Culex are clubbed shaped and are shorter than its proboscis while that of Anopheles were as long as its proboscis and pointed.

Male mosquitoes have plumose or feathery antennae while females have none. Engorged female Anopheles were selected by observation of the protruded abdomen. These were those that have already received a blood meal.

Chi square X2 was used to determine differences between species set at 5% level of significance.

The engorged females were dissected transversely between the first and third pairs of legs under the dissecting microscope. This severed the head and thorax from the abdomen.

The abdomens severed were placed in flat bottomed Enzyme Linked Immunosorbent Assay (ELISA) plates and grinded to release the bloodmeal for analysis, this is to detect the source of the bloodmeal, whether human or not. Direct ELISA was used based on the procedure of Beier et al [8]. Anti peroxidase conjugate (anti human IgG) was used to identify human blood meal. A total of 29 bloodmeals were assayed.

Negative controls were triturated male mosquitoes. Samples were considered positive 30 minutes later when colour changes to green (visually) before the addition of substrate ABTS(2’2 azinodol-3-ethyl bentiazoline). The samples were read with a Labystem Mulkians multisoft type Elisa reader for confirmation.

The corresponding heads and thoraxes were separately triturated in specimen bottles containing 50 μl grinding buffer. Sandwich ELISA was used for Plasmodium falciparium detection based on the method of Wirtz et al. [1]. Pf 2A10 monoclonal antibody and peroxidase conjugated antibody were used with the triturates added in between.

This assay was carried out in U-shaped ELISA plates [9] Male mosquitoes were used as negative control. Samples were considered positive 60 minutes later when colour changes to green (visually) before the addition of substrate ABTS. The samples were read with a Lasystem Mulkians multisoft type Elisa reader for confirmation.

Abundance and distribution of the outdoor caught mosquitoes

Table 1: showing the abundance and distribution of Mosquitoes collected in Iba LCDA.

There was increase in number of mosquitoes collected from February to June for Anopheles mosquitoes only (Figure 1). 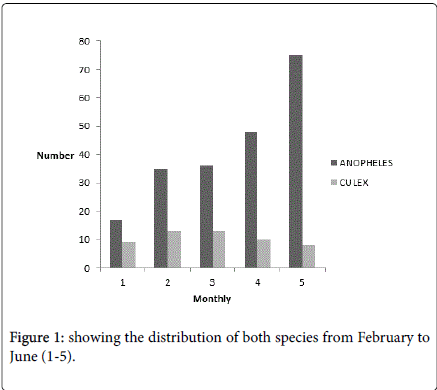 Figure 1: showing the distribution of both species from February to June (1-5).

Twenty nine of the Anopheles female were engorged, 11 tested positive for human blood. The human blood index is 37.9%.

5 out of 29 engorged Anopheles female tested positive. The sporozoite rate is 17.2%.

To complete their gonotrophic cycle, female mosquitoes require a second blood meal one day after the first to mature the first egg batch. Bites are taken at night between 18hrs to 6hrs. Mosquitoes that have fed outdoors do go in for more blood meals. In this study mosquitoes were caught outdoors while trying to bite. Such mosquitoes could find their way inside the houses in the absence of human baits. There has been an increased number of infected mosquitoes in nature of which many are exophilic [10]. Behaviour and ecological determinants to which mosquito respond is of great interest to vector control. Diverse epidemiological situations have to be taken into account to control mosquitoes [11]. Malaria vector control in Africa has been mainly based on use of Insecticide treated nets and indoor residual spraying but control of mosquitoes and breeding sites outside homes is equally important and advocated.