Copyright: © 2014 Shastri D, et al. This is an open-access article distributed under the terms of the Creative Commons Attribution License, which permits unrestricted use, distribution, and reproduction in any medium, provided the original author and source are credited.

An impacted tooth is one that is embedded in the alveolus and not erupted in scheduled time, and its eruption is prevented or the tooth is locked in position by bone or the adjacent teeth [1]. Mandibular second premolars rank third, after third permanent molars and maxillary permanent canines, in frequency of impaction [2]. The prevalence of impacted premolars has been found to vary according to age.3 The overall prevalence in adults has been reported to be 0.5% (the range is 0.1% to 0.3% for maxillary premolars and 0.2% to 0.3% for mandibular premolars) [3,4].

Mandibular second premolars alone account for 24% of all dental impactions excluding molars [5,6]. Premolar impactions may be due to local factors e.g. mesial drift of teeth by premature loss of primary molars, ectopic positioning of premolar buds; or pathology e.g. dentigerous cyst [2,7]. Various treatment methods have been suggested including observation, interceptive orthodontics, surgical exposure with orthodontic intervention, auto-transplantation and extraction depending on position of impacted tooth, relationship with adjacent teeth and need for orthodontic treatment [1,5,6].

Based on the clinical findings where palpation by fingers suggested thin layer of cortical bone over the impacted premolar and orthopantomogram was used to locate the impacted tooth. The described case presented with the most unfavourably placed buccally impacted mandibular premolar due to presence of crowding and the impacted premolar crossing more than half of the mesial root of mandibular right 1st molar. Had we attempted to correct the impacted tooth it might have led to resorption of the adjacent root. The only option left was simply extracting the impacted premolar. The extraction of impacted premolar was done via buccal approach to prevent the injury of mental nerve as the mental foramen is situated just apical to the mandibular second premolar. Anterior loop of the mental nerve is generally present mesial to the mental foramen [8] and needs to be considered before the extraction of impacted second premolar else, even mild compression may lead to parenthesia or dysaesthesia of lip and chin region [9] whereas if the nerve is completely severed then permanent paresthesia can results [10].

A 16-year-old female was referred to the department with multiple retained deciduous teeth. On clinical evaluation, unilateral missing mandibular 2nd premolar tooth was observed (Figure 1a) besides crowding in the mandibular arch. On radiological evaluation (OPG), it was observed that the mandibular right second premolar was impacted in horizontal position with its crown lying below the furcation of mandibular first molar (Figure 1b). Due to abnormal positioning of the impacted premolar, it was not possible to bring this tooth in the arch with conventional orthodontic traction with or without surgical intervention. The auto-transplantation was also not possible for this tooth due to its peculiar position and lack of space in the arch. So, it was decided to extract the mandibular right second premolar. Extreme care needed to be taken before its extraction due its close proximity to the mental nerve. Due to the buccal positioning of the impacted tooth it was decided to adopt buccal surgical approach for the removal of the impacted tooth. 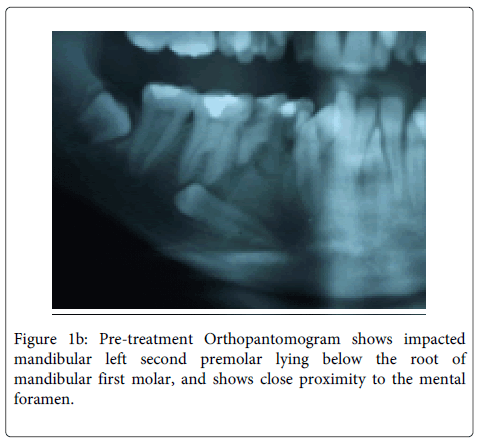 After achieving proper local anaesthesia, incision was made with Bard Parker blade # 15 in the gingival crevice on the buccal aspect of right mandibular second premolar

tooth. A full thickness mucoperiosteal flap was raised with Molt periosteal elevator (Figure 2a). The bone bulge on buccal cortex due to crown of impacted tooth was identified and decortication of buccal cortex was carried out with surgical hand piece & round bur under coolant irrigation. Initially we attempted to remove the tooth by sectional method, but due to the horizontal position of the impacted tooth, and a single thin layer of cortical plate over the tooth, the whole buccal cortical plate was removed over the impacted tooth (Figure 2b). Then the tooth was extracted while preserving the mental nerve (Figure 2c and 2d). The wound was irrigated with normal saline and flap was repositioned. Suturing was performed with 3/0 black silk suture. Suture was removed after seven days (Figure 2e). Post-surgical healing was good without any complications (Figure 3a and 3b). Figure 2a: Elevation of mucoperiosteal flap on the bulging region. Figure 2b: Removal of buccal cortical plate over the impacted tooth. 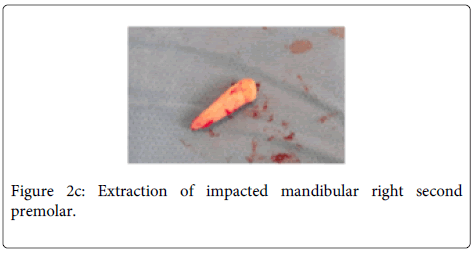 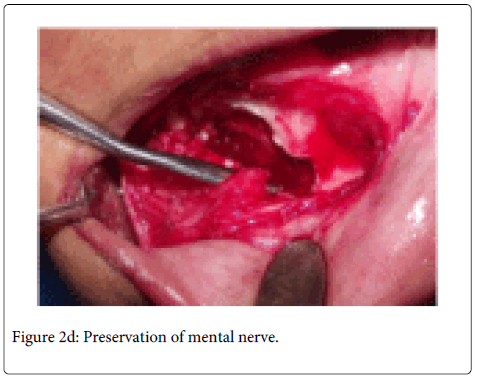 Figure 3a: Intraoral photograph shows post-surgical healing without any complications. 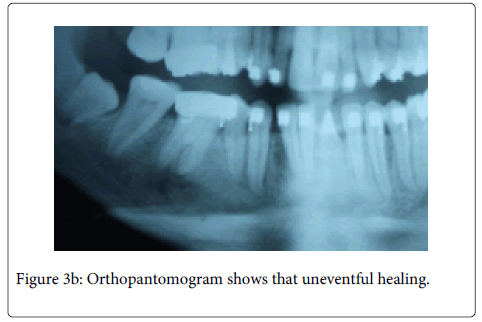 Treatment options for impacted teeth include observation, intervention, relocation, and extraction. On occasions, there may be some interaction between these treatment options [6]. Mandibular 2nd premolars alone account for approximately 24% of all the dental impactions [11].

In selecting an appropriate treatment option, the underlying etiological factors, space requirements, need for extractions of primary molars, degree of impaction, and root formation of the impacted premolar should be considered. Factors such as patient’s medical history, dental status, oral hygiene, functional and occlusal relationship and attitude towards and compliance with treatment will influence choice of treatment options [11-13]. In this case, the impacted tooth positioned approximately 90° to the long axis and crown of the tooth and positioned below the root apices of the first permanent molar with complete root formation. It was close to the mental foramen, and with such a reduced level of available dentoalveolar bone monitoring was ruled out as a choice of treatment as at 16 years of age growth potential had ceased.

The position of the horizontally placed impacted right mandibular second premolar was so unfavorable that no orthodontic treatment of this tooth was envisaged, and hence extraction was planned with precaution to prevent the injury of mental nerve.

Andreasen et al. [3] suggests that surgical exposure should be confined to cases, both maxillary and mandibular with no more than 45 tilting and limited deviation from the normal position, and hence this case definitely required removal of the impacted tooth. As the crown was on the buccal aspect, the buccal approach with removal of tooth was the choice. Care should be taken as; the buccal flap would have jeopardized the mental nerve emerging from the mental foramen and the apices of the first permanent molar tooth. But due to complete removal of tooth with precise removal of buccal cortical plate over the impacted mandibular right second premolar injury to mental nerve was prevented. Careful irrigation of the surgical area to clear any bone and tooth dust in that area prevented any delay in healing and infection.

Correct knowledge of regional anatomy, careful manipulation of tissues, and correct application of mechanical principles involved in tooth extraction provided surgical success. This peculiar and rare case may contribute towards the minimal literature available regarding impacted second premolar tooth and offers buccal approach as a treatment method while preventing injury to the mental nerve.