Trauma to the dentition is relatively common in children. Among the different types of dental trauma, management of avulsion of teeth is one of the most challenging. Most cases of avulsion in children occur in the maxilla; with maxillary permanent central incisors being the most prevalent. For primary dentition, subluxation injury is more common that avulsion. We report the management of unusual case of multiple avulsions of both permanent and primary anterior teeth.

An 8-year-old Hispanic male patient reported with dental and oral soft tissue injury and missing teeth due to trauma sustained while playing at a park.

The father informed that the child was playing at a playground about 15 km away when he fell and hit his jaw against a bench. On prompting if he recovered any of the teeth, the father reached out to his pocket and produced two teeth - one permanent central incisor and the other a primary lateral incisor. The patient did not suffer any loss of consciousness or vomiting.

Extra-oral examination revealed a bruise near the chin but no apparent fracture to the maxilla or mandible. Palpation of the maxilla and mandible revealed no step deformities. Patient was able to open and close the mouth without any discomfort. We palpated the temporomandibular joint without any clicks, crepitus, difficulty or pain during opening of the mouth.

Intraoral examination revealed a collapse of the buccal plate of the mandibular anterior alveolar sockets of avulsed teeth #s M, N, 23, 24, 25 and 26 and a deep laceration on his lower lip (Figure 1). There was also a horizontal uncomplicated fracture of tooth #8, which was neither mobile nor tender to percussion (Figure 2). Figure 1: Clinical presentation of the sockets of the avulsed teeth and laceration of the lower lip. Figure 2: Clinical picture of the horizontal fracture of tooth #8.

A lower occlusal radiograph of the sockets of the avulsed teeth and the lower lip revealed no fractured roots or foreign objects in the lip (Figure 3). 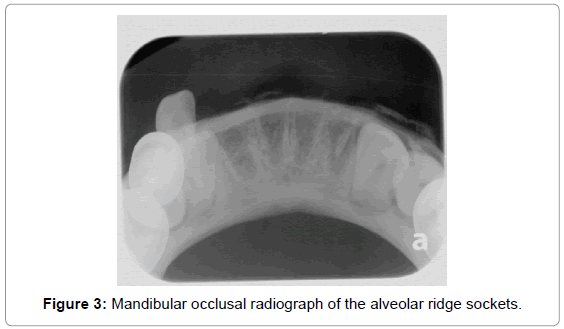 Immediate treatment involved irrigating and suturing the laceration on the lower lip and the sockets with 5.0 absorbable chromic gut surgical sutures (Figure 4). Chlorhexidine mouth rinse was prescribed and oral hygiene instruction given to reduce bacterial load in the oral cavity.

A decision was made not to re-implant the only permanent tooth found as the extra-alveolar time was over 3 h; the tooth was not properly stored and no adjacent teeth were available for splinting.

At this visit, tooth #8, was cleaned, the enamel edges of the fractured sites were feathered, etched with ultraetch 35% Phosphoric acid (Ultradent), rinsed and dried. Bonding agent Optibond Solo Plus was applied and the tooth restored to form with Filtek Z250 composite (3M ESPE) (Figure 5). Figure 5: Clinical picture of the composite build-up restoration of tooth #8 and the healed mandibular ridge.

One week later, the patient presented for a re-evaluation appointment to assess healing. He reported being in constant pain over the previous week, to the point that he had to miss school, and has been taking Ibuprofen to help manage the pain. Oral examination revealed that healing was progressing adequately well and the sutures have resorbed. The patient was encouraged to keep using his Chlorhexidine mouth rinse for the following two weeks to prevent infection at the healing sites.

At the patient’s two weeks follow-up visit, a bone spicule near the #23 area was discovered and removed. During this visit, the parents inquired about replacement of the missing teeth. Fabrication of a fixed partial denture for the child was recommended and approved by the parents.

Four weeks later, mandibular and maxillary full arch impressions were made with heavy body high viscosity Precision® putty paks (DenMat Holding LLC), and cast the models in stone (Figure 6). We designed a fixed partial denture appliance that included bands placed around #19 and #30, a lingual bar and an acrylic base with acrylic teeth (Figure 7). At the next visit, we cemented the appliance to the mandibular first permanent molars with ketac™ Cem Maxicap™ (3M ESPE) (Figure 8). Parents and patient expressed satisfaction with the esthetic result. We provided oral and written Instructions for meticulous oral hygiene and care of the appliance. Figure 8: Clinical picture of insertion of the fixed partial denture in patient’s mouth.

Dental trauma is a very common injury that children sustain and among the different types, avulsion injury requires special considerations if the teeth can be replaced. These considerations include whether it is a primary or permanent tooth, the length of time elapsed and the storage condition of the avulsed tooth before seeking treatment, the state of the socket and finally the competence of the operator [1-4].

Many guidelines recommend re-implantation of permanent teeth if conditions are favorable but not primary teeth [5-7]. In the present case, only one permanent tooth (#24) was recovered but could not be re-implanted as there were no adjacent teeth for splinting , the time lag of about 3 h before reporting for treatment and the lack of proper storage for the tooth [8-10]. The two later reasons raise questions of the public awareness on how to deal with avulsion of teeth. Evidence in the literature show that majority of trauma to teeth occur at school, home or as in this case, playgrounds that may be far away from immediate medical facilities.

The present case is of interest because of the multiple losses of teeth and in particular involving mandibular teeth. Majority of cases in the literature usually involve avulsion of one or two maxillary permanent central incisors. In addition, there was a collapse of the labial wall of the sockets. This may be because the labial sockets plates of the mandibular anterior teeth are thin, compared with the maxillary anterior teeth sockets. Therefore, in most cases of this type of trauma resulting in the avulsion of the maxillary permanent teeth, the sockets are usually intact. The child was provided a functional space maintainer in the form of a fixed partial denture. This will serve to preserve space required during transition to full permanent dentition but also provide function for esthetics, speech and nutrition. Modification or remake of new appliance will be necessary to accommodate for eruption of permanent teeth and the growth of the mandible. The ideal definitive treatment for the loss of the reaming permanent teeth when the child has completed full mandibular growth will be implant restoration.

One aspect of the treatment, which was not provided due to lack of material, is the preservation of the alveolar ridge with socket augmentation material. Many recent studies have suggested that alveolar ridge preservation technique may reduce the amount of alveolar ridge resorption that usually accompanies tooth loss. However, a Cochrane systematic review concluded that there is limited evidence that ARP may minimize the overall changes in the residual ridge height and width 6 months after tooth extraction [11]. A ridge augmentation may therefore be required for implant restoration at appropriate age.

We highlighted some of the complications encountered in the management of an unusual case of multiple avulsions of primary and permanent mandibular anterior teeth.

There is a need for a better public awareness on how to care for avulsed teeth before reporting to the dental faculties for treatment.

The authors affirm that we have no association whatsoever with either the products or the manufacturers of all materials used in the management of this patient.

Copyright: ©2017 Salako NO, et al. This is an open-access article distributed under the terms of the Creative Commons Attribution License, which permits unrestricted use, distribution, and reproduction in any medium, provided the original author and source are credited.