Copyright: © 2016 Tan X, et al. This is an open-access article distributed under the terms of the Creative Commons Attribution License, which permits unrestricted use, distribution, and reproduction in any medium, provided the original author and source are credited.

Results: CBCT images showed the maxillary first molar having 5 root canals in one C-shaped root with fusion of the mesiobuccal, distobuccal and palatal roots.

Conclusions: The DOM and CBCT facilitated the diagnosis and treatment of a rare C-shaped fused root canal configuration in a maxillary first molar.

A 30-year-old male patient was ready to treat his maxillary left first and second molars. The two teeth were chronic pulpitis caused by carious lesion (Figure 1A). Root canal therapy (RCT) was proposed and accepted. The maxillary left second molar with 3 root canals was successfully processed in one-visit RCT. Figure 1: (A) Preoperative radiograph. (B) The radiograph displaying master cones with a missed mesiobuccal root canal.

One week later, the maxillary left second molar was asymptomatic. Then the maxillary left first molar was routinely instrumented 3 root canals with rubber dam and dental operating microscope (DOM) (Carl Zeiss, Jena, Germany). While the working length radiograph showed a missed mesiobuccal root canal (Figure 1B). After carefully probing under DOM, the orifice was still difficult to find, then a CBCT scan (Morita, Kyoto, Japan) of the left maxilla was performed. CBCT images showed the sagittal view of the maxillary left first molar had one rare C-shaped fused root (Figure 2A). And the tooth maybe had 5 root canal orifices with MB2 and DB2 close to P orifice (Figure 2B and C). The canals were dried and filled with calcium hydroxide (ApexCal, Ivoclar Vivadent, Schaan Liechtenstein) as an intracanal medicament for one week.

At the third appointment, with rubber dam and DOM, the pulp calcifications were thoroughly cleaned by ET ultrasonical tip (Satelec, Merignac, France), then the MB2 and DB2 root canal orifices were located following the CBCT images. Cleaning and shaping the MB2 and DB2 root canals were performed with hand and Niti rotary ProTaper files (Dentsply Maillefer, Ballaigues, Switzerland), meanwhile combined with 1.0% sodium hypochlorite and ethylenediaminetetraacetic acid (EDTA) (RC-Prep, Premier, PA, USA). The working length was determined using an apex locator (Dentaport ZX; Morita, Tokyo, Japan) and confirmed by diagnostic radiography (Figure 3A). 2% chlorhexidine gluconate was used as the final rinse solution coupled with ultrasonic agitation. The 5 canals were dried with absorbent paper points and then obturated with AH plus (Dentsply, Konstanz, Germany) and gutta-percha master cones added warm gutta-percha obturator (Suredent, Gyeonggi-do, Korea) by vertical condensation. Radiograph were taken to establish the quality of the obturation (Figure 3C), and the photo showed five orifices as same as shown in the CBCT image (Figure 3B and D). After 1 month, the teeth remained asymptomatic and CBCT showed root filling in 5 root canals (Figure 4A). At the 6-month recall examinations, the teeth had already restored with coronal restoration (Figure 4B). The prognosis was favourable. 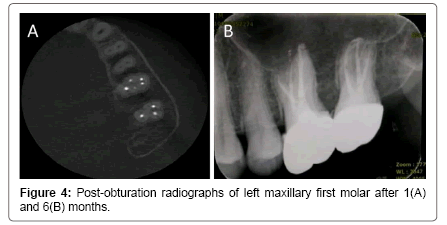 Figure 4: Post-obturation radiographs of left maxillary first molar after 1(A) and 6(B) months.

The diagnosis consciousness of potential anatomic variations is essential for successful treatment. Combination of radiography and clinical examination under the microscope could encounter a higher incidence in the recognition of C-shaped canals [14]. Preoperative radiographs from different angle will contribute to identification of the root canal distribution [3]. The characteristic C-shaped roots are conical or square configuration by fused roots which may display an occlusoapical longitudinal groove on the buccal or lingual surface. Such narrow grooves may make the tooth prior to localize periodontal disease, which may be a diagnostic indication [15]. Access cavity preparation can obey the principle of orifice location. Adequate straight-line exposure of pulp-chamber floor is very important to find all of the root canal orifices, before you used ultrasonic tips to clean pulp chamber and small size files to explore root canal orifices. And some skills are advised such as looking for hemorrhagic spots, doing champagne or bubble test with sodium hypochlorite, modifying the conventional outline form to include the extra canals [16]. The connecting isthmus may be closure to the buccal or lingual side resulting in uncommon root canal orifices distribution [17]. In the present case, the DB and MB orifices are closer to the buccal, while DB2 and MB2 orifices close to P orifice. When the preoperative radiograph and above characteristic clinical examinations under the DOM still cannot make it clear, CBCT should be taken into consideration. It can provide 3-D image and help the clinicians to evaluate the root canal system at different levels [18]. The difficulty of cleaning, shaping and obturation should be the narrow structures such as isthmus, trough and fin. At first, clinicians should know root canal system in advance which would help to prevent excessive preparation the thin dentinal walls causing strip perforation [12]. Secondly, the common methods still include instruments, irrigation solutions and chemical agents. For C-shaped root canal system, the role of the latter two was emphasized. Thus in this case, hand and NiTi rotary instruments, EDTA, sodium hypochlorite and ultrasonic irrigation were combined to obtain efficacious debridement and shaping. Furthermore, calcium hydroxide paste was used as an intracanal medicament in order to further disinfection. Thirdly, obturation was done with AH plus and master gutta-percha cones added with warm gutta-percha vertical condensation.

The C-shaped root canal with fusion of the mesiobuccal, distobuccal and palatal roots in the maxillary first molar is a rare anatomic configuration. Knowing the diagnosis and treatment difficulty of these cases and using the DOM and CBCT can improve the treatment success.