Metabolism during Fasting and Starvation: Understanding the Basics to Glimpse New Boundaries

The human diet is a complex mixture of interacting components that cumulatively affect health [1]. The metabolizable energy of macronutrients (i.e., carbohydrates, proteins, and lipids) is responsible for the bulk of the energy in the human diet. Micronutrients (i.e., minerals and vitamins) play a central role in metabolism and in the maintenance of tissue function [2]. Metabolism encompasses all of the biochemical processes used by organisms to synthesize structural and functional constituents and to obtain energy. It is typically divided into anabolism, which includes the biosynthesis of macromolecules such as glycogen, proteins, and lipids (e.g., triacylglycerol-TAG) and catabolism, which includes the degradation of macromolecules into their simplest precursors: glucose, amino acids, glycerol, and fatty acids. The free energy released by catabolic degradation—via adenosine triphosphate and nicotinamide adenine diphosphate—is used to drive the endergonic processes of anabolic biosynthesis [3]. Carbohydrates (e.g., glycogen) constitute immediate energy stores (liver), and lipids (e.g., TAG) constitute long-term energy stocks (adipocytes) [4]. Proteins constitute the active (functional) cell mass and are a minor source of energy [4].

Pancreatic insulin and pituitary growth hormone (GH)—via the hepatic effector insulin-like growth factor-1 (IGF-1)—are examples of anabolic hormones. Gastric ghrelin is another anabolic hormone that stimulates appetite, other endocrine secretions (pituitary GH, prolactin, and adrenocorticotropic hormone), and weight gain [5]. Androgens (e.g., testosterone) may have an anabolic effect (protein synthesis) [6]. Anabolism increases the requirements for all nutrients, including micronutrients, that should be supplied when patients are gaining weight [2]. On the other hand, pancreatic glucagon and adrenal epinephrine and cortisol are examples of catabolic (hyperglycemic) hormones. These hormones, together with GH, counter-regulate hypoglycemia (i.e., a plasma glucose less than 70 mg/ dL). Pancreatic glucagon, in particular, stimulates the liver to release glucose via glycogenolysis (i.e., the breakdown of glycogen) and gluconeogenesis (i.e., glucose synthesis from non-glycosidic substrates) and stimulates adipose tissue to release free fatty acids (FFAs) and glycerol via lipolysis (i.e., the breakdown of TAG) [3]. Thyroid hormones (e.g., triiodothyronine or T3) are catabolic and play an important role over the long term in determining the set of metabolism [6]. Adipocyte leptin is catabolic in nature and inhibits food intake and lipid storage while promoting energy expenditure [7]. The catabolism associated with acute injury (e.g., infection, surgery, or trauma) leads to elevated energy expenditure and protein breakdown, increasing the requirements for vitamins and minerals [2,8]. At this phase, anabolism is postponed in favor of catabolism [8].

There is also amphibolic metabolism, so-called for serving both anabolic as well as catabolic pathways. The enzymes (and their substrates) of this bi-directional metabolism remain better studied in prokaryotic organisms (bacteria) such as Escherichia coli , whose teleonomy of certain strains enables metabolic versatility that is mainly linked to the citric acid cycle, also known as tricarboxylic acid or the Krebs cycle [9]. Other dynamic aspects of this vital metabolic cycle include anaplerosis and cataplerosis; the first term refers to the refilling of the Krebs cycle whenever an intermediate leaves the mitochondria during biosynthetic events, and the second term refers to the opposite function (i.e., the removal of accumulating citric acid cycle anions) [10].

The fact that metabolism occurs in many stages mediated by numerous enzyme substrates and products (metabolites) motivates the term intermediate metabolism. The metabolism of macronutrients is particularly interrelated [4]. For instance, glucose may be synthesized from lactate, glycerol, and amino acids (e.g., alanine) (gluconeogenesis), but not from fatty acids [4]. In contrast, the dihydroxyacetone phosphate used to make glycerol-3-phosphate (G3P) for TAG synthesis derives either from glucose via the glycolytic pathway (or Embden-Meyerhof pathway) or from oxaloacetate via an abbreviated version of gluconeogenesis termed glyceroneogenesis [3]. Importantly, both gluconeogenesis and glyceroneogenesis are cataplerotic pathways because they convert citric acid cycle anions to phosphoenolpyruvate, which is then used to make either glucose or G3P [10].

It should be emphasized that glucose and FFAs are the most important energy substrates for most organisms (including humans) and that intermediate metabolism reflects the primacy of these fuels. Moreover, the existence of metabolic cycles such as glucose-lactate (the Cori cycle), glucose-fatty acid (the Randle cycle), and glucose-alanine (the Cahill cycle) reinforces this idea.

Each day, a human’s three primary meals are breakfast, lunch, and dinner, which are interspersed by interprandial fasting periods of approximately five hours each. The longest fasting period corresponds to nocturnal fasting (roughly eight hours). Sleep effectively imposes an extended period of fasting during which energy metabolism differs between sleep stages and begins to increase prior to awakening [11]. Fasting metabolism is clearly adapted to ensuring the orderly mobilization of endogenous substrates and energy for maintaining vital activity [12]. It is characterized by low insulin levels, high glucagon levels, liver glycogenolysis, and gluconeogenesis for maintaining serum glucose levels and cerebral function [13,14]. Fasting metabolism also involves high levels of lipolysis and FFAs via circulating TAG for enabling energy utilization by most tissues other than the brain and the central nervous system (CNS) [13,14]. Glucose then reaches the CNS through specific transporters (e.g., GLUT1 and 3) [15]. As fasting continues, progressive ketosis develops due to the mobilization and β-oxidation of fatty acids and the increase in ketone bodies (KBs) (e.g., β-hydroxybutyrate) that replace glucose as the primary energy source in the CNS, thereby decreasing the need for gluconeogenesis and sparing protein catabolism [3,16]. At this stage, hormonal adaptive changes involve, for example, low insulin and T3 levels along with high levels of ketogenic glucagon and the inactive metabolite of T3 (i.e., reverse T3 or rT3) [16]. Ketone bodies reach the CNS via monocarboxylic acid transporters (e.g., MCT1 and 2) [15]. The brain and other organs utilize KBs in a process termed ketolysis [17]. On the contrary, in the fed state, postprandial metabolism is essentially characterized by high insulin levels responsible for both antilipolytic and antigluconeogenic actions (by suppressing these two pathways) and lipogenic actions (e.g., by stimulating the enzyme lipoprotein lipase (EC 3.1.1.34), which hydrolyzes the TAG of chylomicrons and very low-density lipoprotein at the endothelial surface, which releases FFAs and glycerol for adipocyte storage) [13,14,18]. Aquaglyceroporins (e.g., AQP7 and 9) are responsible for transporting glycerol in the adipocytes [19]. Therefore, insulin plays an essential role in controlling energy metabolism in both a fasting state (in which it prevents severe ketoacidosis) and also in a fed state (in which it promotes fuel storage) [14,20]. Diabetic patients, especially type 1 diabetics, may develop severe ketoacidosis due to a profound insulin deficiency [14].

Fasting often refers to abstinence from food, and the term starvation is used to describe a state of extreme hunger resulting from a prolonged lack of essential nutrients [21]. Hence, the adaptive fasting briefly described above is an evolutionary tactic distinct from starvation [22]. Starvation is, in principle, longer, potentially harmful, and may lead to a lethal outcome. Additionally, fasting and starvation are not synonymous terms, but the expression prolonged fasting is used as a synonym to starvation in the literature. The response to starvation is integrated at all levels of organization and is directed toward the survival of the species [21]. Hunger is an adaptive response to food deprivation that involves sensory, cognitive, and neuroendocrine changes (e.g., increased neuropeptide Y or NPY) that motivate and enable food-seeking behavior [17]. As carbohydrate reserves are rapidly depleted, and protein sources are minor, the survival period of starving individuals depends more on fat reserves than on muscle mass (e.g., obese individuals can survive for several months without eating in clinically supervised weight-reduction programs) [3,4,16]. Apart from the rapidly depleted hepatic glycogenolysis, the other major metabolic pathways of energy supply supplement one other during prolonged fasting or starvation (Figure 1). The increased serum rT3 and the decreased T3 lead to conservation of energy and a decrease in protein breakdown [23]. The increase in renal gluconeogenesis is accompanied by an augmentation in ammonia formation, as evidenced by the increased urinary excretion of ammonia [14,20]. Nevertheless, adipocyte lipolysis (with weight loss) for liver ketogenesis becomes the most prominent interrelated metabolic pathway during starvation [14,20]. If starvation continues until the adipose stores are depleted, muscle is rapidly degraded for gluconeogenesis, potentially leading to a lethal outcome [14,20,22]. 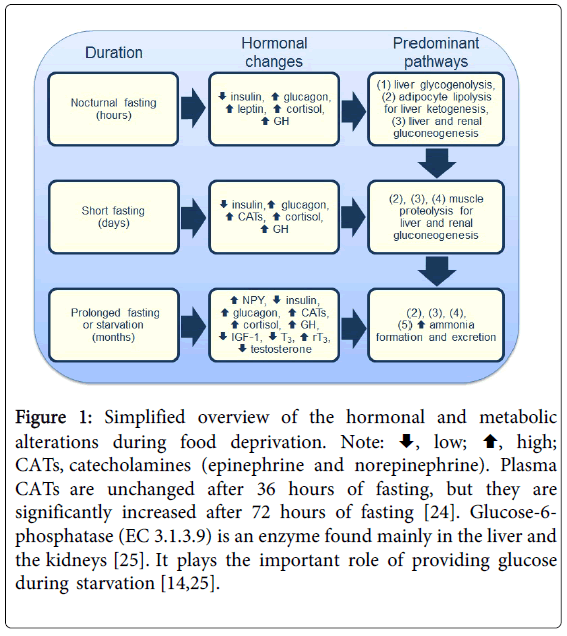 Figure 1: Simplified overview of the hormonal and metabolic alterations during food deprivation. Note:

, high; CATs, catecholamines (epinephrine and norepinephrine). Plasma CATs are unchanged after 36 hours of fasting, but they are significantly increased after 72 hours of fasting [24]. Glucose-6-phosphatase (EC 3.1.3.9) is an enzyme found mainly in the liver and the kidneys [25]. It plays the important role of providing glucose during starvation [14,25].

It is possible to glimpse the new boundaries to which the metabolism of starvation has been placed. Critical illness represents a multifarious cellular insult with damage induced by hypoxia, hypoperfusion, and inflammation, and the removal of cell damage by autophagy is essential for recovery [26]. Autophagy is an evolutionarily conserved process that degrades cellular components to restore energy homeostasis under limited nutrient conditions such as starvation [27]. Thus, starvation promotes autophagy [28]. On the contrary, suppressive effects by nutrients early during critical illness could compromise such damage removal systems [26]. How this starvationinduced autophagy is regulated at the whole-body level is not entirely understood yet [27]. However, anabolic hormones (e.g., insulin and IGF-1) and catabolic hormones (e.g., glucagon and CATs) are significant regulators of autophagy [29].

Copyright: © 2017 Moacir Couto de Andrade Júnior. This is an open-access article distributed under the terms of the Creative Commons Attribution License, which permits unrestricted use, distribution, and reproduction in any medium, provided the original author and source are credited.