Background/Aims: To assess the outcomes of Mini monoka lacrimal stent insertion in the management of epiphora in adults caused by inferior or common canalicular duct obstruction or stenosis.
Methods: A retrospective study was performed selecting consecutive patients at Hobart Eye Surgeons, from Oct 2007 to Mar ’08 who had Mini Monoka stents inserted for epiphora secondary to confirmed obstruction/stenosis in either inferior or common canaliculus. These patients had their stents routinely removed after six weeks.
Results: There were a total of 36 eyes (31 patients) included in the study and 31 eyes (83.7%) showed subjective improvement in epiphora. One patient was lost to follow up and 5 eyes showed no improvement.
Conclusion: In this first case series which used Mini Monoka stents to treat epiphora, there was a high success rate in improvement of epiphora. Further research is warranted to further validate its use into routine clinical practice.

Epiphora is a common presenting problem in ophthalmological clinical practice. There are multiple causes for epiphora. Canalicular obstruction/stenosis is common and increases with age with a female preponderance [1,2]. Treatment for epiphora is often controversial and not always successful [3]. The gold standard of treatment involves retrograde silicone intubation most commonly with Lester Jones bypass tubes plus or minus dacryocystorhinostomy (DCR) [1] or sometimes more complex procedures such as canaliculodacryocystorhinostomy or conjunctivodacryocystorhinostomy if there is total canalicar obstruction [2,3]. DCR with retrograde intubation is reported to alleviate or reduces epiphora in 60-70% of patients with proximal or mid-canalicular disease [3,4]. There is a poorer prognosis for more distal obstructions, with success in the range of 50% [1,3]. Other complex procedures such as canalicular trephination with silicone stent intubation, balloon canaliculoplasty and endocanalicular laser surgery have also recently been described with varying success rates (43 to 84%) [3]. Finally, canaliculodacryocystorhinostomy has a reported success rate of approximately 80% if there is common canalicular obstruction whilst conjunctivodacryocystorhinostomy has success rates of around 90% if performed correctly, with unfortunately high complication rates (as high as 50%) [3]. There is established literature which shows that nasolacrimal intubation is very effective in children with obstructions [5,6]. There are also case series reviewing the success of traditional monocanalicular stents in the treatment of both congenital and acquired nasolacrimal duct obstruction (NLDO) [7-9]. Bicanalicular silicone tube insertion have a reported success rate of only up to 70% [10,11]. We describe a novel use for the Mini Monoka stent in the management of epiphora in adults. The Mini Monoka stent™ was originally designed by Fayet and Bernard and manufactured by FCI France for the treatment of monocanalicular lacerations and there is published literature looking at the efficacy of the Mini Monoka stent in the management of canalicular lacerations [12,13].

We performed a retrospective case series of adult patients at the Hobart Eye Surgeons in Tasmania, Australia, where participants were identified through coding for Mini Monoka stent insertion between October 2007 and March 2008. Two ophthalmologists were involved in this study. Selected patients had presented with epiphora and underwent syringing and probing as routine investigation and management. Patients that were found to have a “soft stop”/ obstruction or stenosis in either the inferior or common canaliculus had the obstruction relieved by probing and then confirmed patency with repeat syringing. All patients provided informed consent prior to Mini Monoka stent insertion. The stent consists of a head or plug, which ensures stable meatic fixation. The head is made up of a collarette (larger than the punctum) and a hollow body that connects the collarette to the bulb, which is designed to fit into the vertical proximal part of canaliculus. The bulb is then fixed to a silicone stent of only 40 mm in length, thereby differentiating it from other monocanicular stents. It is important to note that the stent is not a hollow tube (Figure 1) [9]. 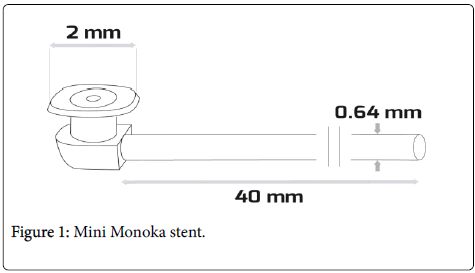 The stent was removed after six weeks by the same ophthalmologist that inserted the stent. By inserting the Mini Monoka stent for a period of six weeks, we aimed to produce resolution to any stenosis or obstruction within either the inferior or common canaliculus. Premature extrusion of the stent occurred if the stent was no longer present at the six week appointment. Given that the Mini Monoka stent is not a hollow tube, patients did have epiphora during the six weeks the stent was inserted. The clinical case notes were reviewed pre and post Mini Monoka stent insertion. The following data was recorded: the patient’s age, gender, eye stented, stent insertion and removal date and follow up time. The patient’s subjective outcome was assessed via the patient’s verbal feedback during their follow up clinic visit. The patients were asked specifically whether their epiphora had improved after stent removal, how well the stent was tolerated, and whether they had any side effects. The data was tabulated and simple statistics were used to calculate whether there was a positive outcome with the Mini Monoka stent.

Thirty patients and a total of 36 eyes were identified to have Mini Monoka stents inserted. The mean age of the patients was 72. 60% of the patients were female. The mean follow up duration was four months (range 3 to 8 months). Thirty one eyes (83.8%) showed subjective improvement in their epiphora. Of the remaining 3 cases, one was lost to follow up and three did not have any subjective improvement. Premature extrusion of the stent occurred in 2 patients. The stent was reinserted and one of these patients went on to have symptomatic improvement whilst the other had no change. Of the patients that had no subjective improvement, one patient had an ectropion and a persistently everted punctum secondary to facial nerve palsy, and one had a narrow punctum. The last case which showed no improvement was the patient whose stent had extruded at the two week follow up mark. Even though the stent was reinserted, the patient had persistent common canaliculus stenosis once the stent was removed. There were no major side effects such as infection or corneal abrasion. The stent was well tolerated. Although some patients did report some minor caruncular irritation and conjunctival pruritis, no patients were significantly affected to want the stent removed earlier.

We believe this is the first case series in the literature looking at the use of Mini Monoka stents for primary management of epiphora secondary to canalicular obstruction or stenosis in adults. More importantly, our study had 83.8% success rate, demonstrating that the use of such a stent is a better procedure compared to traditional silicone intubation.

One case series looking at the success rate of the Ritleng stent in both congenital and acquired NLDO had an overall 85% success rate. However, the majority (70%) of the patients in the series had congenital NLDO [7]. Connell et al’s case series looking at nasolacrimal intubation in adults with Silastic tubing as originally described by Quickert and Dryden [14] or with Crawford tubes found that the 38 eyes with canalicular obstructions had a success rate of complete resolution in 65.1% of patients and a further partial resolution in 21% [8]. This is a similar success rate to our study. However, these silicone tubes require a probe that is retrieved out of the nose and secured with either ligaclips or suturing. The patients were also intubated in both inferior and superior canaliculi. In addition, all patients in this study had the procedure performed under a general anaesthetic [8]. Another case series reported the success of the Mini Monoka stent for acquired external punctual stenosis with or without associated internal punctal and canalicular stenosis. In this series, all thirty-five patients underwent a one-snip punctoplasty and Mini Monoka stent insertion. Of the patients, only 60% of the patients had either a lower canalicular or internal punctal stenosis. The study found a 77.4% complete functional success, 7.5% partial functional success, and 96.2% anatomical success at the last follow-up [9]. Our series which is more specific to canalicular abnormalities rather than punctal stenosis shows a similar success rate.

The Mini Monoka stent has significant advantages to other monoand bi-canalicular stents. It is easy to insert and remove, and can be done under local anesthetics in clinic rooms by an ophthalmologist. It is suture free and there is no intra-nasal manipulation unlike many other stents. The silicone material is soft and pliable which minimises tissue trauma and is relatively inert thereby minimising ocular irritation compared to polyurethane stents which can induce inflammation and fibrosis. There is also decreased chance of erosion of the punctum which occurs more frequently with bicanalicular stents [12,13,15].

In our study, the stent was well tolerated. Although some patients did report some minor caruncular irritation and conjunctival pruritis, no patients were significantly affected to want the stent removed earlier. There have been published reports on complications associated with the Mini Monoka stent such as local reactions of conjunctival pruritis and caruncular irritation. Furthermore, infections such as mucoceles, canaliculitis or keratitis may occur. This risk can be minimised with correct aseptic technique. There is also the chance of corneal ulceration secondary to rubbing of the collarette [12,13,15]. However, this did not occur with any of the patients in our series. Another common complication is stent migration or extrusion which did occur in two of our patients.

Limitations of our study include the need for a larger sample size, the fact that it was a retrospective study, and the need for longer term follow-up. The severity and the specific site of obstruction, in addition to differentiating between whether the patients felt there was complete or partial resolution of symptoms, were not included in our analysis because of its retrospective nature - that information was not recorded in the clinical notes. However, it would be important to include this data in future studies.

In conclusion, we have described a novel use for the Mini Monoka stent in the management of inferior or common canalicular obstructions or stenoses in the adult population. Our case series shows this procedure is simple and easy, and can precede more complex surgical procedures. Furthermore, the Mini Monoka stent insertion is a much easier procedure to perform compared to traditional silicone stents, with less possibility of side effects and similar if not higher success rate.

Copyright: © 2016 Jeganathan VSE, et al. This is an open-access article distributed under the terms of the Creative Commons Attribution License, which permits unrestricted use, distribution, and reproduction in any medium, provided the original author and source are credited.