Malaria is one of the major public health challenges undermining development in the developing countries with 300-500 million annual clinical cases and kills up to 3 million people annually of which 90% of the cases and deaths occur in Africa [1].

The purpose of this study is to undertake a statistical analysis for identifying the influence of rainfall for malaria transmission. Due to sever health problems of malaria, there is still a growing need for methods that will help to understand the influencing factors, allow forecasting, early warning so that for the implementation of more control methods.

To identify the association between positive malaria cases and rain fall.

Ethical clearance was obtained from Bahir Dar University and submitted to meteorology agency/office which is found in Bahir Dar city and Yilmana Densa district health office for receiving permission during data collection. 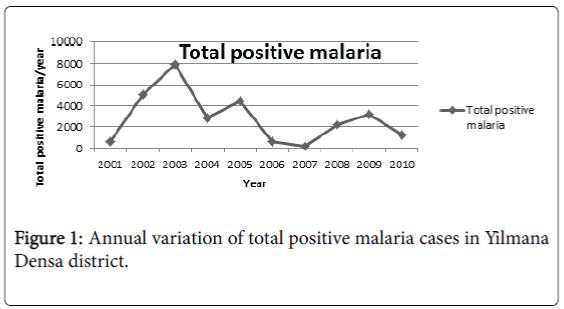 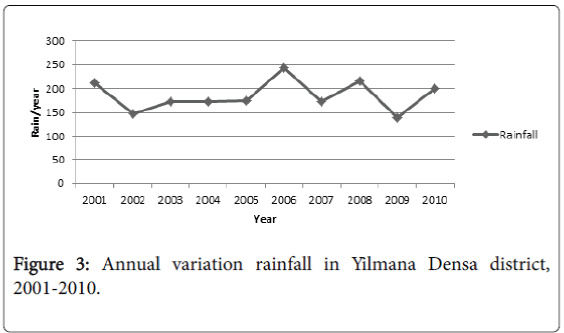 The main goal of regression analysis is to predict or estimate malaria cases occurrence associated with rainfall variable. It is usually desirable to express their relationship by finding an appropriate mathematical equation. To form the equation, monthly rainfall used as independent variables and malaria cases and positive malaria used as dependent variables. Let the observations be denoted by (R1, M1), (R2, M2), (R3, M3) . . . (Rn, Mn).

Spearman correlation analysis used to observe the strength of association between malaria cases and climatic variables and showed at the same month effect that, average rainfall (P=0.048) had statistical significantly positively related with P. falciparum . Where as maximum rainfall negatively correlated with total positive malaria cases.

Time series analysis was conducted from 2001 to 2010 and the result showed that Malaria cases were consistently present in Yilmana Densa district and cause for morbidity and mortality; although intensive intervention had been carried out there.

Spearman correlation analysis also showed that maximum rainfall at zero month effect were negatively correlated with total positive malaria cases, this might be due to much rainfall washout the vectors breeding site and affect the life cycle of mosquitoes which was similar to study in Tanzania [2] and Burundi [3]. Minimum rainfall both at the same month and one month lag time had positive association with P. falciparum , P. vivax and total positive malaria cases this was in line with studies in Dehradam India [4], Amazon [5] Kuazukulu, South Africa [6] and Ethiopia, Adama [7] and Jimma [8], since it provides aquatic anopheles vector breeding site and it also provides relative humidity which is essential for mosquitoes survival., but it is opposite to study which was conducted in Botswana [9,10], the reason might be difference in rainfall amount between the two countries.

This result suggests that rainfall was the most significant factor that correlated with malaria transmission in the study area than the other variables, since correlation coefficient was greater.

The results of a similar study conducted in Amazon [5], suggested that monthly malaria cases occurrence or incidence is related to change with rainfall. Simple linear regression analysis showed that at the same month rainfall was negatively correlated with total malaria cases, this finding were coincided with study in Burundi [3].

The regression analysis at one month lags effect rainfall was statistically significant P-value of 0.001 with total malaria cases.

Multiple regressions suggested that rainfall, were predictor variables strongly associated with total malaria cases (p<0.001), these meteorological variables happens at the same time might factors for excessive malaria cases occurrence. So, during such condition continuous malaria prevention and control activities like bed net distribution and utilized properly, spraying and treatment should be not forgotten.

From the ten years time series analysis, malaria cases occurrence was not periodic in the study area. Since, malaria cases were found throughout the year.

Rainfall has contributed for malaria transmission, since it had strongly correlated with positive malaria cases. The correlation and regression analyses, temperature, rainfall and relative humidity were associated with monthly malaria case occurrence at the same month or one month delay. So, the change in the current month climatic factors may contribute on the same month or the next month malaria transmission.

Rainfall seems malaria predictor variables and may cause for malaria transmission in endemic areas, since associated with malaria cases.

Based on the study finding I recommend the responsible bodies should use rainfall variables to estimate malaria cases occurrence. Uninterrupted malaria prevention and control activities should be done by focusing on areas and months with the highest malaria risk for preventing the disease.

TW-Proposal writing, data collection, analysis, manuscript preparation and write up (all activities of the study were done by him).

I like to acknowledge Health Development and Anti-Malaria Association for their financial support.

And also I like to thank regional meteorology bureau and Yilmana Densa district health office and health centers for their cooperation during data collection.