Routing is a process of determining a path between source and destination upon request of data transmission. In multi-hop networks the source node cannot reach the sink directly. So, intermediate sensor nodes have to relay their packets. Some sensor network applications only require the successful delivery of messages between a source and a destination. However, there are applications that need even more assurance. These are the real-time requirements of the message delivery, and in parallel, the maximization of network lifetime. WSNs which are generally composed of large number of nodes are packet-switched wireless systems that share many properties with the other networks. These nodes have severely limited energy, processing, communication, and storage resources. Therefore for reliable and consistent communication in WSN, the lifetime of the network, scalability, heterogeneity, node deployment, fault tolerance, communication range and mobility play a major role. Lifetime is the most important concern in wireless sensor networks due to limited battery power of sensor nodes. In this paper, we focus on designing an energy-efficient and energy-aware routing algorithm with cross layer architecture to increase the operational lifetime with improved data rate in multi-hop wireless sensor networks in the presence of unreliable communication links. The implementation considers both node and link specific parameters. Simulation results reveal that the proposed algorithm can outperform other existing schemes in term of the network lifetime and data rate.

Wireless Sensor Networks (WSN) is intended for monitoring an environment. The main task of a wireless sensor node is to sense and collect data from a certain domain, process them and transmit it to the sink where the application lies. However, ensuring the direct communication between a sensor and the sink may force nodes to emit their messages with such a high power that their resources could be quickly depleted. Therefore, the collaboration of nodes to ensure that distant nodes communicate with the sink is a requirement. In this way, messages are propagated by intermediate nodes so that a route with multiple links or hops to the sink is established. Considering that communication costs (transmission power) are usually more expensive than computing costs, Energy efficient routing algorithms are very important in multihop WSNs where the constituent nodes have batteries with limited energy. In many wireless adhoc scenarios, the metric of actual interest is the total operational network lifetime and not the transmission energy of individual packets. Through the energy aware routing mechanism, the residual energy on each node is the basis of the routing decisions. The main objective of these algorithms is to avoid the extinction of nodes due to exhaustion of their battery power. Even under benign conditions, wireless communication links are unreliable and often unpredictable due to various factors like fading, interference, multi-path effects, and collisions. When a poor path is chosen for data delivery, loss rate will be heavy and retransmissions will cause extra energy consumption, and consequently, less network lifetime. Furthermore, more traffic also yields a higher collision probability and delivery delay. All the previous studies considered this lossy property of the wireless links. In this paper, we present a new energy-efficient and energy-aware route selection algorithm based on cross layering approach to maximize the data transmission considering the node specific (e.g. residual battery energy and the number of paths which the node is common among) and link specific (e.g. link error rate and the packet transmission energy for reliable communication across the link) parameter. The path reservation is a key element of the Route Request Broadcasting Delay. It can prevent too many paths from sharing a few nodes. Once a node is reserved, its Broadcasting Delay becomes longer (B Delay increases), and so another path can potentially bypass this node to use other nodes with lower Broadcasting Delay. In this system we randomize the parameters such as Distribution of nodes, variation in energy and variation in the error rate to emulate the real world scenario. In addition to this, we shall follow a cross layer approach to achieve higher data rate [4]. Figure 3 depicts the proposed system architecture. 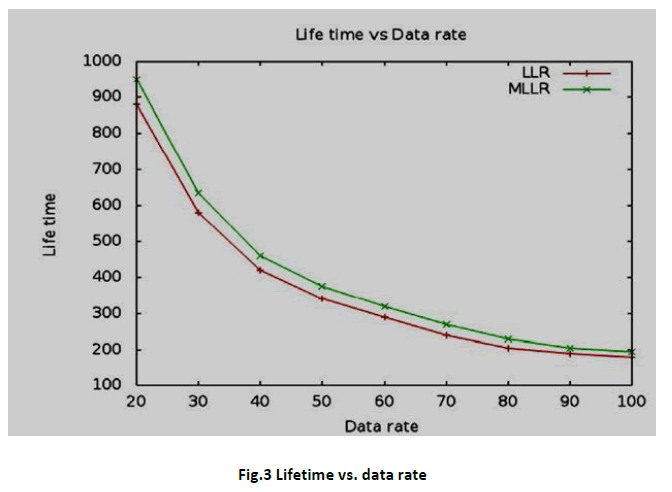 Cross-layer design refers to protocol design done by actively exploiting the dependence between protocol layers to obtain performance gains. It is the protocol design by the violation of the reference layered communication architecture. Practically speaking, direct communication between the layers means making the variables at one layer visible to the other layers at runtime. By contrast, under a strictly layered architecture, every layer manages its own variables, and its variables are of no concern to other layers. Cross-layer design is needed between the network and MAC layers since the functionalities of the two layers interact. These protocols need to fulfil a multitude of design and functional requirements, including,

WSN nodes must manage several performance aspects, such as system management, power management, security, that cut across traditional layers. For example, physical, medium access and routing decisions have a significant impact on power consumption, and the joint consideration of them can yield more efficient power consumption. The traditional strictly layered architectures do not enable sufficient interaction among layers to make joint decisions to optimize these cross-layer aspects. The cross-layer performance aspects can be simplified with cross-layer design approach.

WSN nodes must manage several performance aspects, such as system management, power management, security, that cut across traditional layers. For example, physical, medium access and routing decisions have a significant impact on power consumption, and the joint consideration of them can yield more efficient power consumption. The traditional strictly layered architectures do not enable sufficient interaction among layers to make joint decisions to optimize these cross-layer aspects.

Wireless links are more susceptible than wired links to interference variations and channel errors. One classic example is the TCP congestion control problem in wireless links already discussed. Providing higher layers with awareness of the wireless link status enables nodes to adapt their configuration better to physical layer properties. For example, a routing protocol that detects a drop in quality of a particular wireless link can create a new route to divert traffic to another wireless link. Existing interlayer dependencies motivate cross-layer design for WSNs. For example, the operation of data link layer is closely related with the performance of the physical layer. If provided with current channel conditions, the data link layer can adapt error control mechanisms in a dynamic manner, thereby improving throughput.

We baseline our results to [1] and with cross layer approach, we try to achieve higher throughput. We run the simulation by varying several parameters, including data rate and time. Simulation results are obtained and averaged over the runs. Figure 3 illustrate the network lifetime when varying the data rate. Obviously, the network lifetime decreases with the increase in the data rate. However, we can clearly see that the modified long lifetime routing protocol fares better. Figure 4 plot total energy consumption at different time intervals. Here too the modified long lifetime routing protocol fares better with lower energy consumption over a period of time. 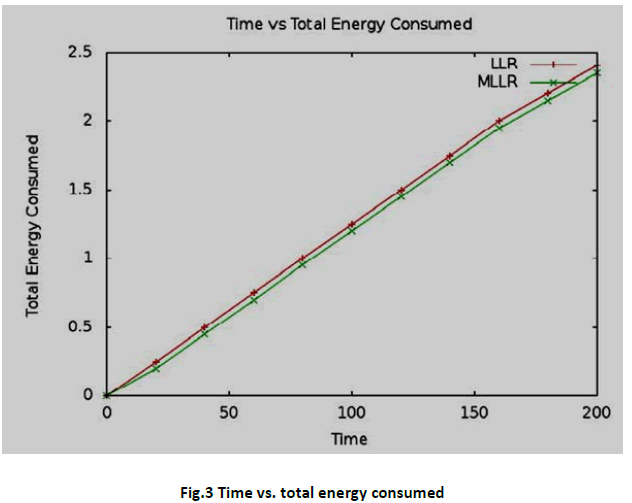 In this paper, we have presented a power-aware algorithm for energy-efficient routing that increases the lifetime of multi-hop WSNs using cross layer approach. In contrast to conventional power-aware algorithms, this algorithm identifies the capacity of a hop not only based on the residual battery energy and the number of paths sharing the associated node, but also the expected energy spent in reliably forwarding a packet on it. Our simulation experiments confirm that the implemented algorithm outperforms other traditional routing schemes. Although the protocol exhibits better performance and higher data rate, there is still scope for further improvements and future work such as considering heterogeneous networks, consider the effect of network density and quantized residual energy levels on the performance.