Gall bladder (GB) carcinoma is the fifth most common malignancy of gastrointestinal tract. Mucinous carcinoma (MC) of gall bladder is a very rare variant of gall bladder carcinoma. To the best of our knowledge, only 20 cases of mucinous carcinomas have been reported till date. We report a case of 42-year-old female patient who presented with complaint of pain in right hypochondrium region, nausea and vomiting since three years which had progressively increased in the past one month. Ultrasound (USG) examination revealed thickening of gall bladder neck and presence of multiple gall stones. CECT abdomen revealed an asymmetrical wall thickening of GB at the neck region, with infiltration into the liver. Cholecystectomy specimen showed glistening grey white thickness at the neck of gall bladder. Microscopic examination showed mucinous adenocarcinoma. Tumor comprised of cystically dilated mucin filled glands and was seen infiltrating into the Liver and Lymph nodes.

A 42-year-old woman presented in the outpatient department with complaints of pain in right hypochondriac region, nausea and vomiting since the last 3 years which had progressively increased in the past one month.

The patient was a known case of diabetes and hypertension. On examination her blood pressure was raised to 150/88 mmHg. On per abdominal examination, a mass was palpable in the right hypochondrium. USG revealed circumferential thickening at the neck of gall bladder along with cholelithiasis. Other abdominal organs appear normal. USG and CECT Abdomen and Pelvis revealed an asymmetric multifocal enhancing right wall thickening of the gall bladder wall with wall edema and infiltration into the adjacent V segment of liver (Figure 1). 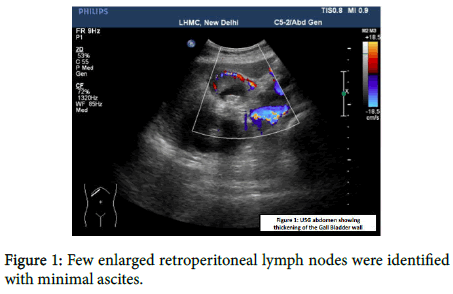 A provisional diagnosis of carcinoma of gall bladder, cholelithiasis, choledocholithiasis, central intrahepatic biliary radical dilatation, ascites, acute biliary pancreatitis with hypertension with diabetes was given (Figure 2). A cholecystectomy along with the liver margin, cystic duct margin and portocaval and retro pancreatic lymph node dissection was performed. Grossly gall bladder measured 7.5 × 3 × 2 cm. The external surface was grey white in color. Cut section showed glistening grey white thickening ranging in size from 0.2 to 1 cm at the neck of the gall bladder. The mucosa was ulcerated and no gall stones were identified in the gall bladder or the container. The liver attached to the gall bladder measured 7.5 cm in length and appeared unremarkable grossly. 5 lymph nodes ranging in size from 0.2 to 3 cm were also received. Their cut surface was grey white in color. Multiple sections were taken from the gall bladder and the histopathological examination showed the presence of tumor cells in a well-defined glandular configuration along with mucin lakes which were mainly extracellular (Figures 3 and 4) and a few foci intracellular (Figure 5). 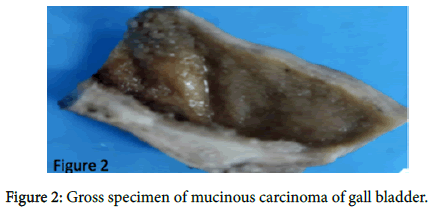 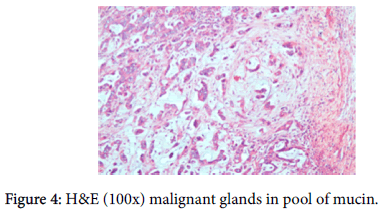 The origin of the tumor from the mucosa of the gall bladder could be well appreciated and the tumor was seen reaching up to the serosa and infiltrating into the liver parenchyma and the lymph nodes. Also there was presence of numerous epithelioid cell granulomas in the liver and the lymph nodes. However, Ziehl Neelsen stain for any acid fast bacilli was negative. Cytochemistry showed the mucin to be positive for Alcian Blue stain at pH 2.5 (Figure 6). An immunohistochemistry panel was put up and the cells were positive for CK7 (Figure 7) and CEA (Figure 8) and negative for CK20 (Figure 9) thus reinforcing the diagnosis of a gall bladder, primary malignancy. A diagnosis of Mucinous Carcinoma Gall Bladder (pT3 N2) infiltrating into adjacent liver with Granulomatous Hepatitis and Lymphadenitis was made. 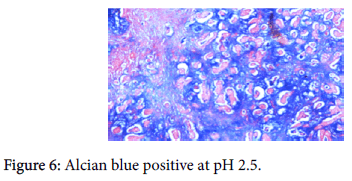 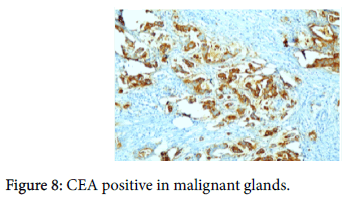 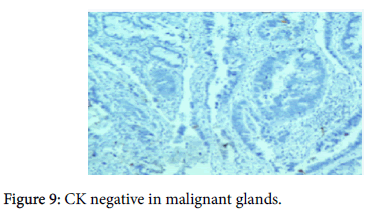 The risk factors for all gall bladder carcinoma are gall stones, calcified porcelain gall bladder, choledochal cyst, polypoid lesion of the gall bladder, sclerosing cholangitis, anomalous pancreaticobiliary junction and exposure to carcinogens [2-4]. Most GB carcinomas are conventional adenocarcinomas of pancreatobiliary type. The literature on the other types of carcinoma occurring in this organ is limited. One of these other types is mucinous carcinoma, which is rather uncommon in the GB and is noted in the literature mostly as individual case reports or small series of a handful of cases. Mucinous adenocarcinoma is characterized by the presence of more than 50% extracellular mucin [5]. <50% of stromal mucin containing tumors was regarded as adenocarcinoma with focal mucin differentiation. Pure mucinous [colloid] adenocarcinoma comprised of >90% of extracellular mucin, as seen in breast, it is extremely rare in gall bladder [2,6,7].

Mucinous carcinomas (MC) of the GB show the following clinicopathologic characteristics, they constitute 2.5% of the GB carcinomas. Female predominance appears not to be as striking as it is in conventional GB adenocarcinomas. Although conventional GB adenocarcinomas typically present with chronic cholecystitis, most patients with MC are admitted and have surgery with a working diagnosis of acute cholecystitis. This may not be surprising, considering that mucin and mucin-related glycoproteins have been shown to have a striking ability of activating an inflammatory cascade [8-10].

The GB mucinous carcinomas are often fairly advanced tumors at the time of diagnosis. In addition to their large size, which is in parallel with the MCs of other organs, MCs are also high stage in cholecystectomy specimens, with 87% of the cases showing T3 tumors, as opposed to 48% in conventional GB adenocarcinomas. This is probably another factor why GB MCs have a more aggressive behavior [11]. Mucinous carcinoma has two histologic variants. One with large pools of extracellular mucin with groups of Tumor cells and other type with cystically dilated mucin filled glands. These may be present either alone or in combination [12].

The GB MCs can be distinguished from intestinal-type adenocarcinomas (including those that are mucinous) by the negativity of CDX2, in addition to their often inverse CK7/CK20 profile (showing CK7 positivity and rare CK20 expression). This may be helpful in the differential diagnosis of these tumors, especially considering that GB MCs are often large tumors and may mimic a metastatic lesion in the hepatic region.

Mucinous carcinomas of the GB, are defined as tumors in which stromal mucin deposition constitutes more than 50% of the lesion. These exhibit significant clinicopathologic differences from conventional GB adenocarcinomas as well as from carcinomas with other types and patterns of mucin formation. The MC occur almost as commonly in men as they do in women and present with an acute cholecystitis picture. Patients with MCs have large and advanced tumors at diagnosis, which are seldom of the pure colloid type, and thus, not surprisingly, they typically display aggressive clinical behavior.

There was no support of funding for the authors.

Copyright: © 2018 Anand A, et al. This is an open-access article distributed under the terms of the Creative Commons Attribution License, which permits unrestricted use, distribution, and reproduction in any medium, provided the original author and source are credited.