Copyright: © 2015 Ruppert C, et al. This is an open-access article distributed under the terms of the Creative Commons Attribution License, which permits unrestricted use, distribution, and reproduction in any medium, provided the original author and source are credited.

Fluorescence imaging in life sciences is a part of the daily routine in many laboratories. The properties of fluorescent dyes applied in experiments play a key role for the success of an experiment and quality of maintained data.

A comparison of applications of quantum dots (QDs) with conventional dyes suitable for conjugation with biomolecules like antibodies or oligonucleotides will reveal similarities and differences. We will further show how QDs can enhance scope and application of conventional dyes. Our focus lies in strategies for using quantum dots to increase either multiplexing capabilities in immunostaining or for applying them as effective partner for exciting other fluorophores in sensitive FRET-assays.

For multiplexing applications like immunostaining for fluorescence microscope imaging [1-3], flow cytometry [2,4-6] or even blot interpretation [7-9], it is necessary to use fluorescent dyes with well separated emission peak wavelengths, since spatial separation isn´t possible or desired. Conventional fluorescent dyes like organic dyes or fluorescent proteins have the handicap that excitation and emission peaks are very close (small stokes shift) in their spectra [10]. Multiplexing, however, needs a setup of a monochromatic light source (laser light, or mercury lamp equipped with a monochromator) and an optical filter setup for detection. Up to three conventional dyes can be combined to stain different targets [11,12]. Overlaps in spectra and decreasing dye intensity in near infrared (NIR) [10], however, prevent the combination of more dyes.

Quantum dots, on the other hand, show a completely different behaviour. CdSe nanocrystals for instance can be excited with a UV light source below 400 nm. Replacing organic dyes with QDs ensures very sharp emission bands in the analytical range of the spectrum (ca. 450-900 nm). This in turn provides more room for peak separation and increases the number of colours which can be used simultaneously. Furthermore, signal intensity in the near infrared (NIR) range is very satisfying [10], adding to the multiplexing potential. Multiplex applications for conventional dyes are mostly time resolved, switching between light sources and filter setups to avoid interference light. However, quantum dots can be excited at low wavelengths simultaneously while allowing effective peak separation in multichannel readout configurations or real time multiplexing.

This is actually the point where available optical hardware has to catch up. Multichannel readout systems aren´t very widespread and fluorescence-activated cell sorting (FACS) analysis is one of few applications where real time multiplexing is used daily. Most imaging devices like microscopes lack the opportunity to use a set of optical detectors at once.

In addition to their potential in multiplexing, QDs can also operate as effective donor dye for the formation of FRET pairs, in combination with a conventional dye as acceptor. Förster resonance energy transfer is used to increase sensitivity and/or to prove the interaction of labelled biomolecules [13]. Traditional organic dyes compatible for conjugation with biomolecules, e.g. antibodies (AB) comprise most common molecules such as rhodamines, coumarines, xanthenes or cyanines available from various suppliers. Some of these fluorescent dyes reach quantum yields near 100% and there is a wide product range covering the UV/Vis and the NIR spectrum with decreasing dye efficiency (Figure 2, Tables 1 and 2). 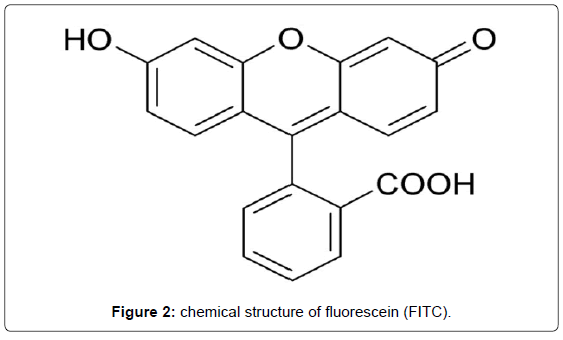 Alternative inorganic materials such as InGaP and InP are available but not as widespread. Typically, CdSe Nanoparticles are covered by a non-toxic ZnS shell, making them suitable for life science applications such as flow cytometry or live cell imaging. This shell can also be modified to increase biocompatibility e.g. by lipids and/or polyethylene glycol and customized for bioconjugation with various functional groups (Figure 3, Tables 3 and 4). 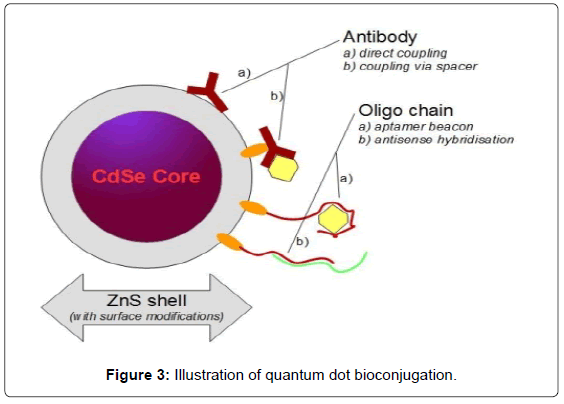 Conjugated quantum dot bio-probes have to be water soluble due to their field of application. Therefore we want to introduce the most common bio-conjugation strategies according to the commercially available surface modifications of quantum dots (Table 5).

Table 5: Bioconjugation strategies based on commercially available quantum dot products (products from life-technologies and cytodiagnostics). Passive adsorption using the Biotin/Strepavidin-System is very common. Covalent coupling is mostly performed using either EDC as linker to form a peptide bond, or by using a maleimide-linker to form a thioeher bond. Maleimide coupling has the advantage that the conjugation reaction is more specific and can be devided into two steps avoiding crossreactions.

▪ Similar optical properties as organic dyes with advantages in photobleaching

▪ Nanometer scale can cause issues in handling

▪ Commonly implemented by transfection into cells.

▪ Not suitable for quantification due to unpredictable transfection rates

▪ Provide the opportunity to encapsulate different dyes in one microbead

Real time multiplexing, however, requires multichannel readout systems which can be flexibly adapted to new upcoming labels. Accordingly there is a need for affordable and reliable hardware for routine applications (Figure 4). 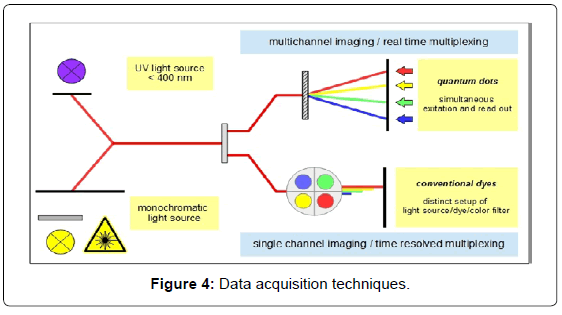 ▪ Western Blotting: Colour multiplexing allows fast imaging without stripping dyes and restaining. Conjugated probes can reduce staining to a one step protocol [8]. There are sets of colored secondary antibodies available that can replace conventional probes [7]. For readout of blots labeled with fluorescent probes, however, an expensive high end blot/gel imager is required.

▪ Microscopy: Conventional dyes allow cell staining for immunohistochemistry or live-cell-imaging with a maximum of three different colours. Quantum dots, because of their unique excitation properties with no absorbance in the analytical colour range, provide the opportunity to expand this toolbox to four or even more colours [3] with no need for further modification of the used light source.

▪ Flow Cytometry: Flow cytometry is one of few, frequently used multiplex applications in standard use, including multichannel data acquisition [6]. For cell sorting based on different fluorescent dyes, FACS-devices are equipped with a set of detectors. Still, limitations to monochromatic laser light sources can thus be the bottleneck preventing wide use of multicolour organic dyes. Using a single light source below 400 nm wavelength for excitation combined with quantum dots instead of small organic fluorophores, however, can unlock multiplex potential in already existing equipment.

To increase the number of sorting criteria it is possible to apply a technique often referred to as barcoding, in particular in combination with QDs [2,4]. For barcoding, molecular probes are equipped with a set of dyes and combinations. Typically QDs or organic dyes are encapsulated in silica or polystyrene coatings and further conjugated to capture molecules e.g. antibodies to form colour coded molecular probes. Combined with a suitable detector and data acquisition setup this kind of multiplexing can code for 2n-1=colour combinations (Figure 5). 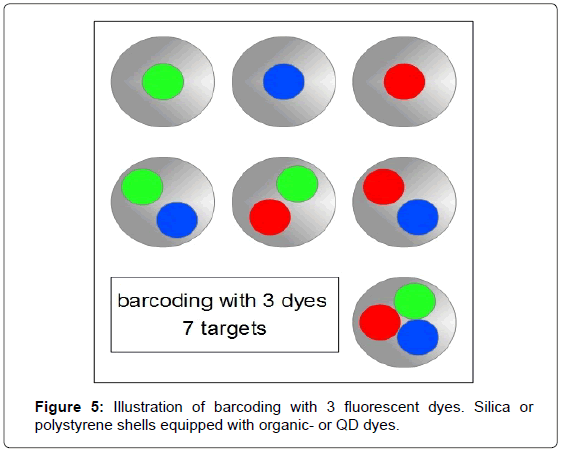 Förster resonance energy transfer (FRET) is a phenomenon in which photo-excitation energy is transferred from a donor fluorophor to an acceptor molecule. Based on Förster theory, the efficiency of this energy transfer depends on the spectral overlap of donor emission and acceptor absorption and the donor-acceptor spatial arrangement [15]. Bioassays based on FRET are frequently used to probe binding and interaction, respectively proximity of various biomolecules, such as labelled proteins or oligonucleotides.

As mentioned, QD properties include broad and strong absorption, bright, narrow and size-tuneable photoluminescence, high quantum yields and resistance to photobleaching. These properties make QDs ideal FRET-donors including the opportunity to optimize spectral overlap with a FRET-acceptor and thereby reducing crosstalk between QD and dye [14].

There are many different strategies for the use of QDs in FRET imaging experiments [14,16]. QDs can act as donors as well as acceptors and can be combined with quenchers or conventional dye systems. The long fluorescence lifetimes of QDs also allow for the design of time gated applications [14] (Figure 6). 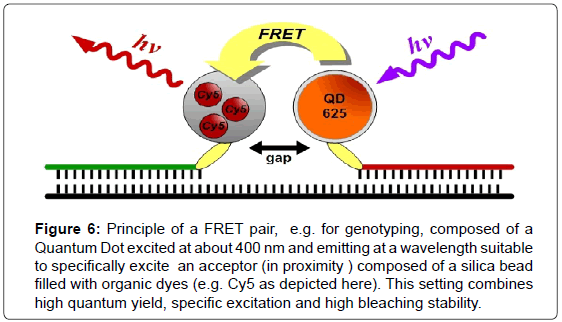 Figure 6: Principle of a FRET pair, e.g. for genotyping, composed of a Quantum Dot excited at about 400 nm and emitting at a wavelength suitable to specifically excite an acceptor (in proximity ) composed of a silica bead filled with organic dyes (e.g. Cy5 as depicted here). This setting combines high quantum yield, specific excitation and high bleaching stability.

For the development of compact optical detectors with easy handling properties to allow point of care immunoassays by untrained staff, the involvement of smartphones for use in portable fluorescence readers, e.g. lateral flow readers is an interesting trend [17]. Provided computing power of modern smartphones makes the use of a bulky computer expendable. As an example, Lee et al. [17] could detect bovine serum albumin (BSA) or human chorionic gonadotropin (hCG) with linear range of 0.4-4000 ng/ml using an Iphone 4 system and an organic dye based lateral flow assay. Another approach based on capillary sandwich immunoassay and quantum dots as dye was implemented by Zhu et al. [18] for the detection of E. coli with sensitivities reaching 5-10 cfu/ml using also a smartphone based system (Sony Ericsson, Aino). A more complex concept to measure nucleic acid hybridization on a paper based solid phase uses a combination of quantum dots (525 emission) and Cy3 (organic dye) as FRET-Pair. The readout via Ipad separating the green and red channel of the built in camera allowed Noor and Krull to reach very high sensitivities [19]. However, this kind of data acquisition has its own challenges.

Variations in camera settings and even software issues require adjustments in the analysis software, preferably in App format. Restricting software and corresponding attachable detectors to a specific phone is one way to overcome these fluctuations. Provided Apps need to recognize and measure peaks reliably and automatically. Colour parameters, such as saturation, luminance, brightness etc. are detectable signals and have to be combined with data processing by regression models. These variations make approval by institutions like FDA/CE difficult.

While stable fluorescent dyes with very favourable optical properties such as Quantum Dots are readily available in various modifications and basically for numerous applications, revelation and widespread exploitation of their whole potential is still limited by affordable hardware. One highly interesting development here and in the context of emerging multiparameter routine diagnostic in precision medicine is the use of mobile-phone light sources and cameras in combination with specialized Apps. The simple excitation light setup allows the design of small portable readout systems for fast point of care immunoassays.