Background: Nasopharyngeal notochordoma is a rare congenital low-grade malignant tumor which is very rarely seen in clinical practice. We describe a case of nasopharyngeal notochondroma, the patient admitted in our department for surgery for fifth time.

Case report: The patient complained of left sided nasal obstruction, snoring, with left fronto-temporal headache and progressive decline of vision especially of left eye for 2 months. She had been performed surgery for the removal of nasopharyngeal notochodroma for four times. Every time she was performed surgery postoperative imaging examination showed no any residual tumor mass. But unfortunately there was always recurrence of mass. This time (fifth time) the patient was admitted for surgery, latter after the CT scan and MRI examination, showed bone destruction so patient denied for surgical treatment.

Conclusion: In this study we describe the clinical features, diagnostic evidence, treatment and discuss the possible reason of recurrence. Nasopharyngeal notochondroma is impossible to remove completely by surgery so other radiotherapy will help to increase prognosis and survival rate. As clinical feature of nasopharyngeal notochondroma is quite similar to nasopharyngeal carcinoma so it should not be confused in diagnosis and treatment.

A 22 years old female, without any obvious inducing factors patient complained about left sided nasal congestion, snoring, with left frontotemporal headache and progressive decline in vision especially left eye for 2 months, no nasal bleeding, no purulent nasal discharge, no bloody sputum, no eye movement abnormalities, no dysphasia, no limbs movement disorder. Six months ago she underwent resection of nasopharyngeal chordoma in our hospital. For the further diagnosis and treatment, patient come to out–patient department of our hospital, diagnosed as “post-operative recurrence of nasopharyngeal chordoma?” Since the onset of the disease, the general mental state, sleep and appetite is normal, no significant changes in body weight. From 2000-2014 4 times surgery was performed. Four previous surgeries in 2000 March; performed endoscopic naspharyngeal norochondroma resection surgery, in 2007 January and 2009 September performed combined endoscopic palatal approach notochordoma resection surgery, and in June 2014 performed endoscopic trans-sphenoidal approach nasopharyngeal notochondroma resection which was not performed in our hospital. This time when she was admitted in our department, all the preoperative tests were normal. Nasopharynx computed tomography scan (CT scan) (2015-1-20) (Figure 1A, B and C) and magnetic resonance image (MRI) (2015-1-23) (Figure 2A, B and C) revealed postoperative changes in skull base notochordoma, recurrence? During routine nasopharyngeal endoscopy examination found polypoidy growth in nasopharynx (Figure 3) biopsy of that mass showed inflammatory polyps (Figure 3). Patient was planned for surgery again after the discussion with the patient’s family member and consultation with department of radiotherapy, patient denied to perform surgery this time but rather try local radiotherapy and the patient was discharged from our department.

Nasopharyngeal notochordomas are slow-growing, can continue to grow for several years to more than 10 years. Nasopharyngeal chordoma occurs mainly in nasopharynx (basisphenoid or basiocciput or tissue around eustachian tube orifice), but also invade to the middle cranial fossa, saddle area, clivus, pterous apex and parasella [1]. Chordoma can occur at any age. Which can range from 1 year to 80 years old, but mostly occurred in the 40s. Male sexes are predominant, between the ages of 40-60 [2]. Nasopharyngeal chordoma usually presents with nasal obstruction, purulent nasal discharge, decreased sense of smell, nasal obstruction, snoring, tinnitus, hearing loss, decline of vision, headache, and sometimes may have nose bleeding and difficult in swallowing [3].

In our case the patient also complain of left sided nasal obstruction, snoring, with left fronto-temporal headache and progressive decline of vision especially left eye. Form 200-2014 the patient had been operated for 4 times with different surgical approach but there was reoccurrence of the tumor. Figure 4(A) showed the MRI preoperative images which were taken before the surgery for second time, mass in the skull base can be seen. After the surgery postoperative MRI Figure 5(b) showed no any remaining mass in the surgical area. Figure 1(c) showed the MRI take 6 months after the second time surgery the tumor reoccur, the skull base mass can be seen. Similarly in the Figure 2(A) mass can be seen but after surgery Figure 2(B) the nasopharynx seemed to be free of mass, seemed to be tumor is completely resected. But unfortunately this time when patient was admitted in our hospital with the complain of left sided nasal obstruction, snoring, with left frontotemporal headache and progressive decline of vision, CT scan and MRI was performed showed the mass in the skull base and bone destruction confirming the reoccurrence of the mass. Every time the patient underwent surgery postoperative CT scan or MRI showed tumor free, but the mass reoccur again and again within few months. 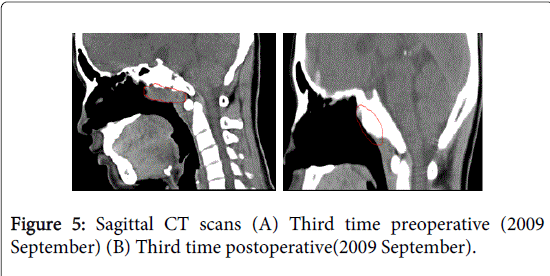 In addition to the history and physical examination, diagnosis is made mainly by pathological examination, but should rule out intracranial infection. Radiographs of the skull base, nasopharynx CT or MRI scan, can show nasopharyngeal mass and bone destruction. The principle treatment option is surgical resection of the nasopharyngeal mass, combined with postoperative radiotherapy and chemotherapy. Surgical resection of nasopharyngeal chondroma is still difficult. There are several common surgical approach, each revealed the extent of surgery, according to the the radiological findings, pathological changes and specific circumstances of the patient and lesion, selection of surgical approach is decided.

Confirming the location and extent of tumor by preoperative CT and MRI and other tests there are different surgical approaches [4]. Rong, et al. in 79 skull base neoplasms mentioned the use of eleven surgical approaches including midfacial degloving, frontal coronal discission, nasal eversion, maxillary swing, partial maxillary resection, total resection of orbit, mandibular swing, combination of front, temple, preauricular, post aureum, neck, and transoral approaches to resect the tumor[5]. In a study by George, et al. in 136 notochordomas treated and followed up over 20 years (1972–2012), mentioned that the delay before recurrence, metastasis and death is always better for the skull base notochordomas, quality of resection is the major factor of prognosis with 20.5% of deaths and 28% of recurrences after total resection resection as compared to 52.5% and 47.5% after subtotal resection. Adding proton therapy to a total resection can still improve the results. Protontherapy only improves the overall survival; the adjunct of proton therapy after total resection is clearly demonstrated [6].

In generally it is believed that notochordomas are less sensitive to radiotherapy, but is also increasingly used as postoperative treatment which has better effect than the surgery alone.

Nasopharyngeal chondroma when invade the surrounding tissue complete resection of the tumor become difficult. Most of the tumor most should be treated with radiotherapy (RT). It is believed that the risk of severe late complications and occurrence are low and cure rate high. Proton beam therapy alone or combined photon – proton beam therapy offers the advantage of improved dose distribution and the ability to treat the tumor to a higher dose without exceeding normal tissue tolerance. The 10-year local control rate after proton/photon RT is approximately 40% to 50% [8].

In another study by Feigl GC in 13 patients with 15 tumors first underwent maximal tumor resection. Within 2 to 10 months after surgery they were treated with Gamma knife surgery, GKS (mean treatment dose was 17 Gy and the mean dose was 52%), after the follow up for 17 months only one reoccurrence was at the radiation margin so he encouraged the use treatment combining surgery and early GKS [9].

Prognosis of Nasopharyngeal notochordoma depends largely on the extent of surgical resection, postoperative recurrence is common, and so the prognosis is poor. In a study conducted by Georges Noël, Jean- Louis Habrand et al. in 67 consecutive patients chordoma and chondrosarcoma of the skull base and the cervical spine treated with irradiation combined high-energy photons and protons. Photons represented two thirds of the total dose and protons one third. The median total dose delivered within gross tumor volume was 67 Cobalt Gray Equivalents (CGE; range: 60–70 CGE), found that within a median follow-up the 3-year local control rates was 71% for chordomas the 3-year overall survival rate was 88% [10]. Complete resection is very difficult to achieve, reoccurrence rate and metastasis after surgery is high. Complete resection is difficult to achieve due to tumor size, infiltrative nature, central location, and proximity to vital structures. Residual tumor is often unavoidable and invariably leads to recurrence. Tumor slippage during surgery is another cause of recurrence and may metastasis to lymph nodes, skin, lungs, liver and bones [2]. Nasopharyngeal notochordoma is a low-grade malignant tumor, selective postoperative radiotherapy is an effective method to increase the time interval to recurrence, radiation therapy offers excellent chances of cure.

Naospharyngeal notochondroma is a rare disease in the department of otolaryngology. Because of it clinical features and site of occurrence is similar to nasopharyngeal carcinoma so some time the disease may be miss diagnosed so otolaryngologist should pay attention to this disease. The main stay of treatment is believed to be surgery although complete surgical resection of mass is difficult to achieve. In order to resect the tumor completely and reduce the complication and possible malformation, according to the radiological findings, pathological changes and area involved different surgical approaches must be designed. Skull base chordoma is a rare neoplasm that is rarely cured after surgery alone. So to get better prognosis after surgery the surgeon should design the shortest approach, avoid damaging the important nasopharyngeal and intracranial structure, and resecting the total mass as possible.

From the above literature review and case report study we derived a conclusion that nasopharyngeal notochondroma are not completely resectable so the best possible treatment method should be surgical resection of mass along with radiotherapy (such as GKS or proton radian therpay, etc).

The authors have no information to disclose in relation to use of any writing assistance.

The authors would like to acknowledge Department of Radiology, First affiliated Hospital of Guangxi Medical University for the image courtesy.

All authors have not received any financial support from any person or organization for this study.

The authors have no financial and personal relationship with other people or organization that could inappropriately influence this submission.