Nuclear Power and its Position within the Future Energy Vertical

Copyright: © 2013 Marcum WR. This is an open-access article distributed under the terms of the Creative Commons Attribution License, which permits unrestricted use, distribution, and reproduction in any medium, provided the original author and source are credited.

There are few topics within the United States that energy experts agree upon. However, one present topic that tends to align perspectives for all individuals who are tied to the energy vertical is the understanding that, irrelevant of the form of energy produced, the U.S. is in continuous need of a growing capacity in order to satisfy its even faster growing demand. The growth rate, in percent demand, has slowed in the U.S. since the World War II era as a result of continuous advancements and improvements in steam cycle efficiency as can be seen from the figure below [1]. However, efforts to further improve steam cycle efficiencies have plateau over the immediate past decayed. As a corollary the electric demand growth is projected to slowly increase due to an increase in population and industrial power needs over the next 30 years (Figure 1). 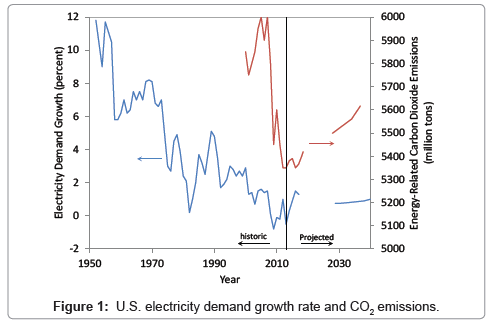 In addition to the ever expanding need of energy capacity is a real and present agenda to reduce carbon dioxide (CO2) emissions. Due to significant efforts and subsidies on the part of the U.S. administration, utilities have been able to reduce CO2 emissions by approximately 10 percent over the past five years (Figure 1). These efforts are primarily a result of retrofits in older generation coal plants, along with the addition of clean coal and natural gas plants. However, the Energy Information Administration (EIA) has projected CO2 emissions to increase in out years as seen in Figure 1. This increase is due to the addition of power generation sources brought online in order to satisfy electricity demand growth. Regardless of one’s stance on global warming (or the lack thereof) and its connection to CO2 emissions, we as a society have directly observed increased levels of the CO2 quantities released in our atmosphere and have a direct control over this consequence.

The EIA has identified natural gas as the primary source for expansion within the energy sector over the next 30 years, based on present fuel costs. Although natural gas is presently considered to be of abundant supply, there is no objective evidence that can clearly articulate the total quantity of natural gas prevalence in the United States. Therefore, the claim that natural gas is and will be readily available for decades to come is unfounded. As can be seen from Figure 2, the price of natural gas has historically been quite volatile (fluctuating dramatically from year to year) based on the present status of production within the United States. Projections, such as that seen in Figure 2 tend to lend a far too optimistic perspective on the future costs of such as resource, due to the visual interpretation of a very ‘smooth’ and continuously slow increase in fuel costs. 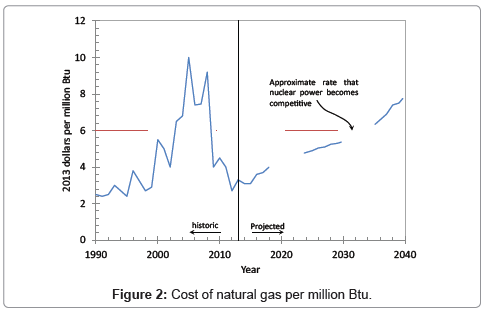 Alternate forms of energy such as those from renewable sources (e.g. wind, solar, etc.), are presently very competitive when compared against other technologies. However, significant levels of federal subsidies maintain these competitive price-points. Furthermore, the rate for which renewable energy forms must be brought on-line in order to satisfy the U.S. electric demand growth is presently unrealistic due to the low power densities of said sources.

Presently, the only form of continuous, CO2 free emissions electricity available and that is producing power in the U.S. is in the form of nuclear energy. Just like all forms of energy, there are benefits and down-falls to nuclear power. Although, nuclear power has an extremely high power density (can provide power to large populations from a single plant) and does not emit CO2 from its production cycle, upfront it is a relatively expensive form of energy. The capital cost of a traditional nuclear power plant is on the order of 8 B$, making it an extremely exclusive market to only a select number of large corporations who have sufficient equity to invest in such a technology. In order to compete with other forms of energy, nuclear power must become fiscally economical. Presently, there are numerous companies within the United States and throughout the world that are attempting to address this concern through the conception, and design of small modular reactors (SMRs). The intent of the SMR concept it so scale-down a technology that has traditionally only been available for sale to select corporations world-wide down, so as to widen the market of available customers and potentially create a business model which returns a profit over a much shorter period of time [2]. Present studies demonstrate a compelling case for these developing technologies from companies such as Babcock & Wilcox mPower, NuScale Power, Westinghouse, and Holtech. These present concepts become competitive with natural gas at approximately 6 $ per MBtu. From Figure 2, this is projected to take place around 2034. Although this market trend may not appear promising for the inclusion of nuclear within the future energy demographic, it aligns closely with the projected deployment dates of the SMR fleet based on current progress. This innovative technology has one large fundamental hurdle to overcome during the deployment and implementation of the first sweet of units that will be brought online – the supply chain. The premise behind a more market friendly nuclear technology is the SMR modularity. While existing reactors are large in scale with a significant component of the required plant fabrication taking place on-site, SMRs cater to a completely different construction process, enabling the majority of their components to be fabricated in shop and transported to the construction site. This flexibility is of significant benefit through the reduction of fabrication costs and time, however, may cause issues in plant assembly due to the number of critical components that are required to be delivered in sequential order from first and second tier vendors.

Ultimately, nuclear power does have a place in the future energy vertical if the U.S. desires to maintain both its current and projected electric demand while meeting CO2 emissions requirements. As such, SMRs may be the wave of the future within the nuclear industry specifically due to the scale-of-economy, but have new and real issues that must be addressed in the licensing, construction, and operations before. Regardless, it is this SMR wave that has demonstrated the most promise within the nuclear industry and will be the primary contributor that drives the prevalence of nuclear energy within the entire energy vertical. 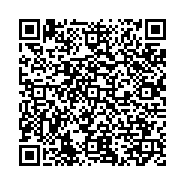