Dementia with Lewy Bodies (DLB) is the second-most common cause of dementia in North America behind Alzheimer’s disease, and is characterized by cognitive, motor, and neuropsychiatric disturbances that usually follow a fluctuating, progressive course [1]. While the latest McKeith Consensus Criteria possesses high specificity for DLB patients, 18-fluorodeoxyglucose positron emission tomography, or FDG-PET, has been touted as a reliable modality for diagnosing DLB by way of occipital hypometabolism in patients with dementia [2,3]. Albin et al. [4] looked at 6 patients with pathologically-confirmed DLB and found significant occipital and primary visual cortex hypometabolism. Ishii et al. [5] investigated 36 patients with clinical DLB and found significant p-values for cerebral glucose metabolic rate (CMRglc) values in occipital lobes compared to patterns seen in Alzheimer’s Disease and normal controls.

The study was conducted according to the human subject study protocol approved by Barrow Neurological Institute (BNI) Institutional Review Board. Because this was a retrospective chart review with minimal inherent risk to patients, expedited approval was granted. Informed consent was waived as this retrospective cohort study did not involve direct patient participation, obtaining informed consent was time-consuming and unnecessary given minimal risk to patient privacy, and the records were studied under protocols enforced by our organization’s Institutional Review Board.

Outpatient electronic medical record database was queried for all patients carrying ICD-9 code diagnosis 331.82 or ICD-10 code diagnosis G31.83, namely Dementia with Lewy Bodies, who have had diagnostic FDG-PET scans within the last three years [13]. Thirty-nine consecutive patients with a clinical diagnosis of DLB who had had an FDG-PET of the brain acquired during the diagnostic evaluation were included. Four patients with non-diagnostic scans were excluded from the study. Patients with a clinical diagnosis of DLB who did not undergo a FDG-PET were excluded. Outpatient visit records were then filtered manually for features of the disease in accordance with the Fourth McKeith Consensus Criteria published in 2017 [2]. In this manner, thirty-five patients carrying a clinical diagnosis of possible, probable, and definitive Dementia with Lewy Bodies were included in this study (Table 1). Subjects with alternative dementia diagnoses – Parkinson’s Disease Dementia, Alzheimer’s Disease, and Frontotemporal Dementia -and patients exhibiting secondary features of delirium akin to DLB (hallucinations, fluctuating awareness) were excluded from this study. Healthy controls were not used in this study. Demographics of the patients described in the above section, namely age, gender, age at diagnosis, disease duration, and core clinical features, were compiled and tabulated.

Table 1: Demographic characteristics of the patients analyzed retrospectively in this study.

The clinical reports were gathered with review of the impression and technical aspects. The data-gathering portion of the study involved reviewing radiological reports and tabulating hypometabolism in regions of interest (ROI’s)-frontal, temporal, parietal, occipital, and cingulate as either present or absent (1 or 0 respectively). The analytical portion of the study involved a single-blinded nuclear medicine physician (FS) read of FDG-PET scans of the patients compiled in the abovementioned manner in the descriptive portion of the study. All patients queried in the above manner with probable or possible DLB had their FDG-PET scans read by a blinded Nuclear Medicine physician who determined regional hypometabolism. The Nuclear medicine physician marked regions of interest (ROI’s) exhibiting hypometabolism based on 0-1 scale of either absent or present respectively. Primary visual and visual association cortical metabolism was also investigated.

The proportions of hypometabolism for each region of interest (frontal, temporal, parietal, occipital, and cingulate) in both the radiological and independent reads were calculated by dividing the number of positive scans for that ROI by the total number of patients. These proportions were compared side-by-side, and a Cohen’s kappa coefficient was calculated to assess for independent reader agreeability with the prior reported regions of hypometabolism [14].

The demographic characteristics, clinical diagnoses, and functional outcome measures are shown in (Table 1). The sample included 35 patients (23M, 12F) with a mean age of 73.77 years and disease duration of 3.71 years at the time of the FDG-PET scans 94.3%, exhibited fluctuating cognition, while Parkinsonism and visual hallucinations were present in 88.6% and 57.1% respectively. Seventeen (17) patients, comprising 48.57% of our patient population, carried a diagnosis of definite DLB (three of four core clinical features as defined by McKeith Consensus Criteria, 2017), while 16 (45.71%) patients carried a diagnosis of probable DLB (two of the four core clinical features). Only 2 (5.71%) patients had one of the core clinical features to classify as possible DLB. Table 2 demonstrates the percent of scans with reported hypometabolism by region of interest in both the radiology reports and the independent nuclear medicine physician blinded read. Temporal and parietal hypometabolism were found in 88.6% and 91.43% of patients respectively, whereas frontal hypometabolism was found in only 37.1% of patients on clinical reports. Occipital hypometabolism was reported in 25.7% of cases, while cingulate hypometabolism was reported in 17.1% of cases.

Table 2: Percent prevalence for hypometabolism of different regions of interest in the above patient cohort on radiology reports and independent read.

Table 4: Summary of kappa measure of agreement between radiology reports and independent reads.

The significance of this study is that occipital hypometabolism as an in vivo biomarker was found to be grossly under-reported on clinical reports. Further, we find that 91.43% of patients exhibit occipital hypometabolism, whether in the primary visual or visual association cortices, compared to 25.71% on prior radiological reports. Significant disagreement existed between radiology reports and our independent reads, with a Cohen’s kappa coefficient 0.063 and a p-value of 0.282>0.05. The novelty is that these data suggest the occipital hypometabolism might be missed clinically but the frequency is actually higher than previously reported [8].

From these data, it is possible to speculate that when a general radiologist rather than a nuclear medicine specialist is reading PET scans for a local hospital, there will likely be differences. It is common practice for nuclear medicine, Neuroradiologists, and general radiologists to read a wide variety of scans. This could account for the heterogeneity in detection of hypometabolic changes. This study is not without its limitations. The first is that core clinical criteria were used in the inclusion of patients into this study, and as such DLB was considered to the primary diagnosis for these patients at the time of FDG-PET scanning. Therefore, coexisting pathology was not taken into consideration. That being said, the second limitation is that probable DLB carries with it a high proportion of coexisting Alzheimer’s Dementia pathology on previous studies, and this study did not specifically address the distinction between DLB and mixed Lewy Body and Alzheimer pathologies as evidenced on cingulate hypometabolism. However, clinical features strongly suggested a predominantly Lewy Body Dementia picture for most patients. The third is that although 90% of patients had their eyes open during the study as per protocol, around 2 had their eyes closed per the technician and a handful had indeterminate eye opening/closure status. This influences the scan by causing hypometabolism in the occipital lobe, which can confound the diagnostic picture [16].

However, the proportion of patients with eyes closed during the scan was felt to be negligible in this study. Another potential limitation is selection bias, since the primary selection apart from diagnosis is whether they had had FDG-PET which was largely determined by whether the scans were underwritten by insurance companies. The primary objective of this study is to demonstrate the underreporting of occipital hypometabolism by identifying patients with occipital hypometabolism per radiologist reports, and determining the agreeability of such a read with an independent, blinded Nuclear Medicine physician. Occipital hypometabolism is therefore not reliably reported and often missed. These findings could establish a cohort for longitudinal research of FDG-PET biomarkers in DLB and improve clinical practices in diagnosing and managing DLB from an investigational standpoint. Furthermore, this study stresses the importance of identifying the primary visual and visual association cortices in patients with suspected Dementia with Lewy Bodies let alone any dementia syndrome to begin with (Figure 1). 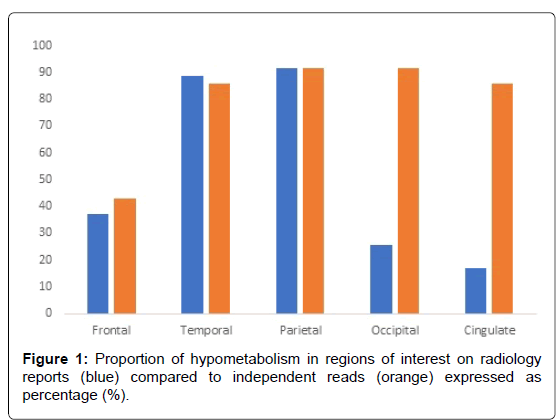 Figure 1:Proportion of hypometabolism in regions of interest on radiology reports (blue) compared to independent reads (orange) expressed as percentage (%).

• Occipital hypometabolism as an in vivo biomarker was found to be grossly under-reported on clinical reports.

• Our data suggest the occipital hypometabolism might be missed clinically but the frequency is actually higher than previously reported.

• Future directions would include reproducing these data using large datasets and comparing the central reads with the local reads. Also, a retrospective analysis of existing imaging datasets to confirm these findings would be of interest.

Copyright: © 2018 Hamed M, et al. This is an open-access article distributed under the terms of the Creative Commons Attribution License, which permits unrestricted use, distribution, and reproduction in any medium, provided the original author and source are credited.