Copyright: © 2015 Hançerliogullari O, et al. This is an open-access article distributed under the terms of the Creative Commons Attribution License, which permits unrestricted use, distribution, and reproduction in any medium, provided the original author and source are credited.

Appendectomy due to acute appendicitis is one of the most common emergency operations that is applied at the general surgery clinics and for this reason neoplasms of appendix may commonly be unforseen. Because unforseen neoplasms of the appendix may cause health problems for the patient and medicolegal problems for the surgeon, we decided to evaluate the histopathological results of the appendectomy specimens that were excised at our clinic between 2012 and 2015. 1332 patients were evaluated and 20 of them were found to have appendicial neoplasms of low-grade mucinous neoplasm in 9 (45%), appendiceal adenoma in 6 (30%), neuroendocrine tumor in 4 (20%) and metastases of gastric adenocarcinoma in 1 (5%) patient. Mean age of patients was 44.6 ± 14.41 years. 13 (65%) were male and 7 (35%) were female. The mean preoperative white blood cell count was 9645.0 ± 4490.3/ mmá¶�. 9 (45%) patient's appendix were able to be evaluated by preoperative abdominal ultrasound and the mean diameter of appendix was 10.65 ± 4.16 mm. None of the patients had meckel diverticulum. Appendectomy was performed to 19 (95%) patients and partial resection of caecum with appendectomy was performed to 1 (5%) patient.

The malignant tumors of appendix are adenocarcinomas, carcinoid tumors and extremely rare stromal tumors which they all may mimic acute appendicitis. Adenocarcinomas are belived to be more common than carcinoid tumors as it was not in past. Unforseen neoplasms of appendix may come up with peritoneal carcinomatosis with short survival and cause medicolegal problems for the surgeons. For this reason, surgeons must keep in mind that all appendix caused acute abdomen patients may not be acute appendicitis.

Appendectomy due to acute appendicitis is one of the most common emergency operations that is applied at the general surgery clinics [1]. For this reason other pathologies of appendix such as benign appendicial tumors (adenoma, leiomyoma, neuroma, lipoma etc) or malign appendicial tumors (carcinoid (neuroendocrine), adenocarcinoma, mucinous neoplasms) may commonly be unforseen [2]. Unforseen benign lesions may not cause any health problems for patient and medicolegal problems for the surgeon because the treatment of the benign neoplasm of appendix is same as acute appendicitis. However unforseen malign neoplasms of appendix is one of the biggest problems for even the patient and surgeon because the treatment protocols may differ according to the type, localization and the size of the tumor where appendectomy may not be curative which means relapse of the tumor.

For the reasons discussed above, we decided to search for the malign neoplasms of the appendix in the patients who were prediagnosed as acute appendicites and had surgery of appendectomy at our clinic.

For the 20 patients evaluated for the neoplasms of appendix, mean age of patients was 44.6 ± 14.41 years. 13 (65%) were male and 7 (35%) were female. The mean preoperative WBC count of patients, were 9645.0 ± 4490.3/mm2, which is in the normal laboratory range values. Appendix of 11 (55%) patients weren't able to be evaluated by preoperative abdominal USG. 9 (45%) patient's appendix were able to be evaluated by preoperative abdominal USG and the mean diameter of appendix was 10.65 ± 4.16 mm. All patients were evaluated for meckel diverticulum and none had it. Appendectomy was performed to 19 (95%) patients and partial resection of caecum with appendectomy was performed to 1 (5%) patient.

Histopathological examination of the specimens resulted as low-grade mucinous neoplasm in 9 (45%) patients, appendiceal adenoma in 6 (30%) patients, neuroendocrine tumor in 4 (20%) patients and metastases of gastric adenocarcinoma in 1 (5%) patient.

The mean hospital stay was 6.1 ± 2 days for 19 (95%) patients and were discharged without any complication. Mortality rate was 1 (5%) whose histopathological result was metastasis of gastric cancer to appendix where clinical presentation of acute abdomen was peritonitis with ileus and the patient had the history of heart attack. 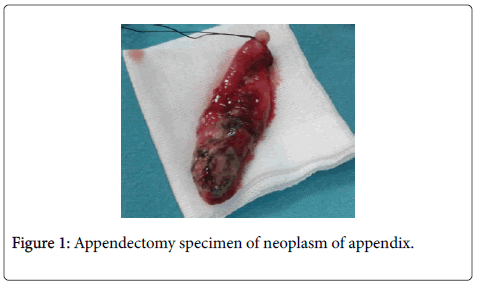 For the adenocarcinomas of the appendix, size is one of the most important distinguishing criteria for benign - malign pathologies of the appendix. A mucocele diameter smaller than 2 cm is almost always benign mucocele where as a giant mucocele is strongly suspicious for malign mucinous carcinoma [7,9]. Intact resection of the mucocele of the appendix is an important factor for the survival of the patient. Complete and intact resection of a small mucocele of appendix with mucinous adenocarcinoma histopathological diagnosis may result with complete cure where the perforation of the mucocele during resection may result in with peritoneal carcinomatosis which has poor survey.

Right hemicolectomy with complete mesocolic resection is recomended for carcinomas >1 cm and is also being debated for carcinomas <1cm [7]. Moreover curative radical approach for mucocele such as right hemicolectomy with mesocolic resection or HIPEC, prophylactic HIPEC without cytoreductive surgery is also being debated for patients whom mucosele is perforated during resection and has the histopathological diagnosis of adenocarcinoma [15,16].

The most common disease of appendix is acute appendicitis caused by appendicolitis. However malignant disease may cause or mimic appendicitis but seen rarely at clinic. Carcinoid tumors of appendix were thought to be the most common tumors of the appendix but now, mucinious tumors of the appendix is being debated to be more common as in our study results. These rare cases of appendix may cause problems both for doctor as medicolegal issues and patient as progressive disease. For this reason, histopathological results of excised appendix must be evaluated by the surgeon for the need of further operations, which is usually been passed over.