Copyright: © 2016 Ghani S. This is an open-access article distributed under the terms of the Creative Commons Attribution License, which permits unrestricted use, distribution, and reproduction in any medium, provided the original author and source are credited.

The conventional protocol for dissection of the vermiform appendix in the Surgical Pathology laboratory allows two dimensional (2-D) histopathological examination of the tip of the appendix. In this report, a new three dimensional (3-D) approach is described, to allow thorough (360 degree) histopathological examination of the entire serosal surface and muscular wall of the tip of the appendix. This is designed to deal with neuroendocrine (NE) tumors that may present at this anatomical location as a routine daily case in every histopathology department. To our knowledge, this approach has not been described in the literature of NE tumors of the appendix.

The conventional protocol for histological examination of the appendix enables two dimensional (2-D) overview of the specimen and is limited by the available Hematoxylin and Eosin (H&E) sections submitted at the initial handling of the specimen.

The new proposed protocol allows three dimensional (3-D) examination of the tip of the appendix and facilitates the inspection of the circumferential margin, the entire serosal surface (360º) and the muscle coat.

The protocol is particularly essential in cases of neuroendocrine tumours (NE) of the appendix.

The histology report that incorporates this procedure will reflect the near exact size and volume of the tumour and its relation to the overlying tissue layers of the appendix. This approach simulates to some extent the sequential CT scan images generated in radiology.

The recommended protocol for routine surgical dissection of the appendix has been described in many surgical pathology textbooks [1-4].

The distal third of the appendix is divided into two halves along the longitudinal axis (Figure 1) and the rest of the specimen is submitted in transverse sections (TSs) including the base. This allows random mapping of the specimen for any microscopical pathology. Figure 1: Distal third of the appendix is divided into two halves along the longitudinal axis.

The critical issue arises when a neuroendocrine tumour is encountered at the tip of the appendix and all available H&E sections, including the deeper levels (in the original protocol); strictly allow 2-D histological examination. The new proposed approach can still be carried out, having followed the above procedure, with the added advantage of 3-D histological assessment of these tumours.

This new protocol requires the following steps to be performed:

Mark the site of the tumour in the original H&E section then apply this to the surface of paraffin block to confirm the correct orientation.

Melt down the paraffin block that incorporates the two distal longitudinal halves and ink the tissue surface at the site of the tumour.

Serial sectioning the two halves into multiple TSs, each 3-4 mm in thickness (Figure 2). 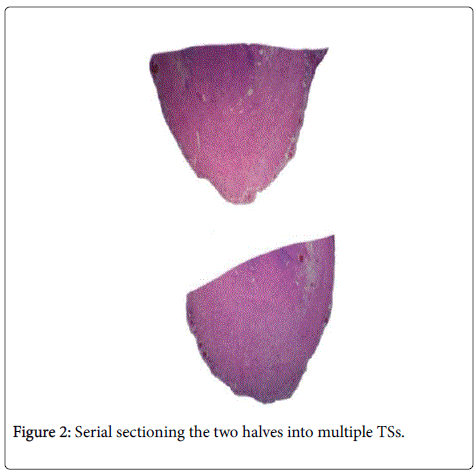 The TSs from each longitudinal half is placed in separate cassettes and in sequential order (distal to proximal end) for orientation and accurate analysis.

By following these steps, it is possible to identify the original site of tumour in the new TSs and allow detection of co-existing new foci of tumour not seen in the original longitudinal H&E sections of the tip. We strongly recommend performing the immune histochemistry (IHC) panel for NE tumours, recommended by the local practice, on the original blocks before attempting to follow this new protocol, for quality and reassurance purposes. We have applied this protocol to a sample case of NE tumour of the appendix with exciting results and intend to carry on implementing this protocol to every new case of NE tumour reported in our department.

Applying this protocol to a sample case of tubular carcinoid (low grade NE tumour) has revealed many interesting findings that include; areas of high tumour density, focal goblet cell differentiation, indications of early muscle coat breach into the sub-serosal fat and foci of lympho-vascular invasion. Many of these critical features were not available in the original longitudinal H&E sections. The additional sections allow extended histological analysis, better orientation and proven to be extremely useful in selecting areas of high mitotic count (hot spots) and interpreting the true proliferation index (ki-67) for these tumours. Adherence to the original protocol may reveal few of these findings but the nature of the specimen (cylindrical) will require many deeper sections with significant loss of orientation as the tissue blocks are exhausted. The existing conventional protocol does not recommend such extensive work out and is not approved by many pathology disciplines.

This is a protocol for 3-D histological examination of the appendix in cases of NE tumors that can be applied to existing protocols in any Histopathology Department. The original longitudinal H&E sections provide two coordinate planes of histology sections and by implementing this protocol, the additional TSs represent the third coordinate plane. The value of extending the conventional protocol to include this method is to allow extensive mapping of the distal third of the appendix and enables (360º) inspection of the serosal surface for signs of perforation and sites of tumour breaching the muscle coat. These additional sections enable the examiner to have a true estimate of the size and volume of the tumour present in the longitudinal sections and its corresponding transverse sections submitted from each half of the distal end of the appendix. The initial estimate of tumour volume in the original sections of our sample case, occupies approximately 10HPF (2.0 mm2), while the volume of tumour examined following this protocol amounts to 45HPF (9.0 mm2). Accordingly, the combined tumour volume available for examination represent an overwhelming [5,6] fold increase compared to the conventional protocol per sec. In other words, the volume of tumour in the original H&E sections represents the tip of the iceberg in comparison to the material that became available following this protocol. These tumours are known to be heterogeneous and our sample case has unveiled this diverse differentiation as a secondary incidental population of goblet cells are found in the additional TSs. Eventually this tumour was labelled as mixed endocrine – exocrine NE tumour. Further possible sites of lympho-vascular and perineural invasion may arise in the new H&E sections as more tissue becomes available.

These facts have proven to be valuable indicators to implement this protocol in subsequent case studies of NE tumours of the appendix and may subsequently have an impact on the interpretation of tumour behaviour and further patient management.

There is yet a place to extend the original protocol of surgical dissection of the appendix in cases of NE tumors, to allow such an extensive evaluation of a potentially widely infiltrative tumour.

This approach represents a true 3-D examination of the appendix in cases of NE tumours and can be applied to existing protocols in any histopathology department. The reporting pathologist is able to provide a comprehensive histopathology report and comment on the entire circumferential margin and the serosal surface at the site of the tumour. This simple addition to the original protocol of surgical dissection of the appendix will enhance the quality of data that becomes available for future literature reviews of NE tumors of the appendix. This procedure can be applied retrospectively to complicated cases of NE tumors of the appendix where the paraffin blocks are available in the filing system. Hence, valuable information can be retrieved, where applicable, in controversial cases. It is recommended that other institutions attempt to carry out trials on similar protocols and implement the one suitable for local practice.