Orbitoides is a large size benthic foraminifera of Tarbur Foarmation (Late Campanian -Maastrichtian) distributed from Northwest to southeast of Zagros area. From the Paleoenvironment point of view this genus lives in shallow environment with high aggitation, high light penetration and low clastic particles in let (like reefs and barrier reefs). The Paleogeographic distribution of Orbitoides is between 28ÃŒÂŠ 35´ and 34ÃŒÂŠ 18´ Northern latitude. The number and variety of the genus decrease from southeast to Northwest of the area and is accordance with temperature reduction toward northern parts and hyaline wall of them. Studies show that the abundance of Orbitoides depends on temperature, type of existing sediments and local tectonic which affects the depth sub-basins.

The presence and absence of certain taxa in varying combination noticed in the different regions along the Tethyan corridor is perhaps caused by different habitat confining to shore or deeper photic zone [2]. It has been shown numerically abundant species most often occur at many localities and geographically widespread while less abundant species more often occur at a fewer localities and narrowly distributed [3]. The distribution trends of Orbitoides also support the above generalization to a certain extent [1]. 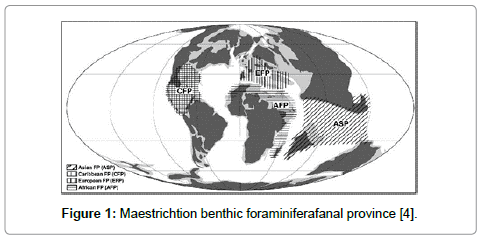 Orbitoides genus can be found in all four provinces. In Iran this genus has been reported in late companion and Maastrichtian reefs in Zagros area (Tarbur Formation and its equivalent). The outcrop of these sediments have a Northwest-Southeast trend and are the extension Southern margin reefs of Tethys which started in Greece and continues until north of Sirya, Iraq, Iran, Oman and the United Arab Emirates.

In the current research by study and interpretation of existing reports on Tarbur Formation, the following methods are used to investigate the paleogeography distribution of Orbitoides genus:

1. Statistical investigation of different species in each section.

3. Drawing the graphs of the abundance percent to geography latitude.

Koop and Stonely [5] indicated truncation and onlap on a pre-Late Cretaceous unconformity [middle Turonian unconformity, base AP9 dated at 92 Ma]. In the deeper intrashelf basins (such as the Lorestan Basin), continous sedimentation occurred across this marked hiatus. Tectonic uplift and the rejuvenation of former N-trending structures coupled with erosion occurred as far north as the Zagros range of Lorestan [6]. In Campanian-Maastrichtian the former intrashelf basins (Lorestan and Khuzestan in Iran) had by now been consolidated to form one long, relatively narrow foredeep trough along the future Zagros Fold Belt. Deeper-marine shales of the Gurpi formation in part represent source rocks. Close to the Zagros main thrust, silt and sandstones of the Amiran and Tanjero flysch formations were deposited in the foredeep [6]. This clastic detritus heralded uplift, or compression, which resulted in folding and erosion farther east during the continuing ophiolite obduction onto the eastern margin of the Arabian Plate [7].

The 2 depositional models are presented in the sequence stratigraphic framework in For Companion and Maastrichtian in Zagros [8]:

1. A low angle ramp dominated by oysters (Lopha) in the west and a rudist and large benthic foraminifera (Loftusia) dominated fauna forming steep angled platforms along the eastern margin. At the South- Western side of this basin, in Lorestan, the bivalve-rich, flat shoals of the Lopha Limestone, followed by the deeper water limestones of the Emmam Hassan Limestone, were deposited. At the North-Eastern margin of this foreland basin, the Tarbur platform was deposited, with its relatively steep platform margins. Rudists, benthic foraminifers (such as Loftusia and Orbitoides) and mollusks (Lopha, oysters, gastropods, bivalves) were the main carbonate producers of the Tarbur platform [9-13]. Skeletal material was partly reworked seawards, and accumulated in outer ramp depositional setting, in association with pelagic fauna.

2. During the Campanian-Maestrichtian major input of siliclastics took place from the northwest and southeast of Khorram Abad [13,14] and part of High Zagros area [10,12,13] as a result of tectonic obduction of radiolarite units. A full siliciclastic system developed (continental deposits, fan delta and proximal and distal turbidites) [8].

The palaeogeography in this phase changes completely, as a result of the abduction and accompanying NW-SE trending foreland basin that formed in the late Cretaceous. Shallow water platforms and fan delta systems (bringing in reworked siliciclastics of the obducted units) were deposited along the ancient plate margin, and very thick (up to 1000 meters) packages of pelagic marls were deposited in the foreland basin trough.

From the Campanian a NW-SE trending basin is formed bordered along the NE margin by an extensive shallow water carbonate system (Tarbur Formation). The axis of this basin was located in interior Fars and NE Khuzestan [8].

Test large, rarely up to 5 cm in diameter, lenticular, symmetrically biconvex to plano-convex [15] made up of a single, roughly flat layer of large chambers (the median layer) with a mound of much smaller chambers on either sides (the lateral chambers) Stolons are big enough to be observed in vertical sections [16]. It seems that the growth of these chambers might be controlled by hereditary characteristics of this genus [17]. The surface is ornamented with small knobs. The juvenarium consists of three or four chambers and is usually embraced by a thick wall. An equatorial layer is distinct [4].

Orbitoides usually occurs together with specimens of the genera Omphalocyclus, Siderolites, LepidOrbitoides, and Sulcoperculina [4]. In the Late Cretaceous Orbitoides is interpreted to have lived in “deeper environments” [18] in the upper photic zone at depths of about 40-80 m [19]. The environment is mostly interpreted as being open marine with some terrigenous input [4,20]. The morphology (thick lenticular test, presence of lateral chambers) indicates a habitat in high energetic environments, which is supported by the presence of Siderolites [4].

In Iran this genus have been seen in association with Loftusia, Omphalocyclus, Siderolites and Lepidorbitoides [11,13,14,21]. The morphology (Thin planner shells with lateral chambers) and their association with Siderolites are indication of high energy habitation. This genus lives in reef mounds and barriers. In Zagros basin their habitation are fore reef and shallow part open. Their presence in high energy fore reefs leads to breaking of their shells. For instance this phenomena is reported in studied species in Chamsangar in Lorestan, S.W of Iran [13,14] (Figure 4). 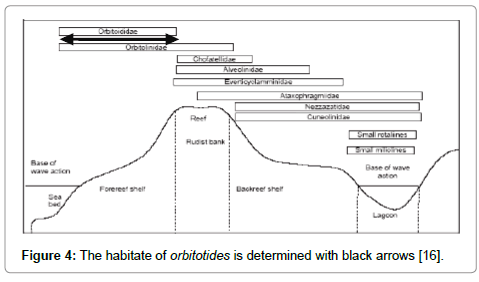 Figure 4: The habitate of orbitotides is determined with black arrows [16].

The Paleogeographic distribution of Orbitoides is global and it is reported from 46 countries so far. This genus is distributed in Caribbean Faunal Province between North America and Venezuela, Tethys and also India and Philippines. Amongst these countries Iran [22-26], Algeria [20,27], Turkey [28,29]. The genus Orbitoides displays some of the widest latitudinal and longitudinal extensions among the larger Upper Cretaceous foraminifera.

Maestrichtion benthic foraminifera have been distributed between the latitudes of 45° North and 40° South. Current distribution of benthic foraminifrera is between 36° North and 34° South [30]. It seems that the higher migration of foraminifera form equatorial line toward the poles and their geographical distribution is the result of higher temperature at the end Cretaceous comparing to current temperature (Figure 5). 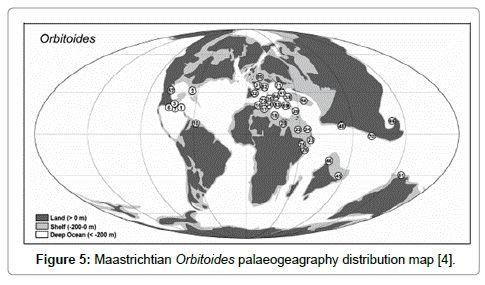 In Zagros basin, Orbitoides genus has 22 species amongst them have been recognized as following:

The paleogeographic distribution of the genus is in Lorestan, Fars, Charmahal and Bakhtiyari and Kermanshah provinces as following:

Table 1: Distribution of different species of Orbitoides in studied sections.

The paleogeography distribution of this genus in Zagros sedimentary basin is between 28? 35′ & 34? 18′ northern latitude. In contrast, other foraminifera with agglutinant walls and same age; the number of the species of this genus decreased from South East to North West.

This might be in accordance with lower geographic altitudes an as a result higher temperature in North Western areas. This can explain hyaline walls in the genus.

The study of species variety of this genus in different geographic latitude of Zagros basin shows that the most variety of species occurs between 29° 00´ to 30° 00´ in northern attitude (Scheme 1). 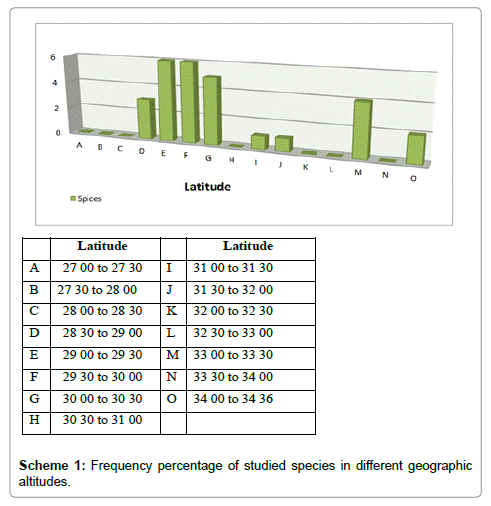 Among the studied species of this genus; Orbitoides media has the highest and Orbitoides triangularis has the least geographical distribution (Schemes 2 and 3). 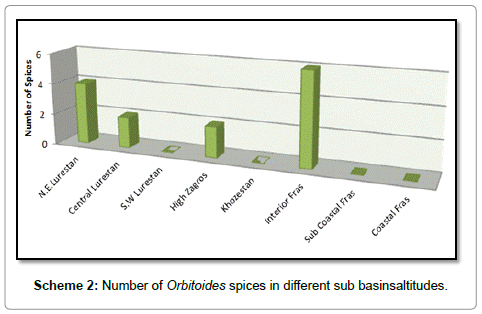 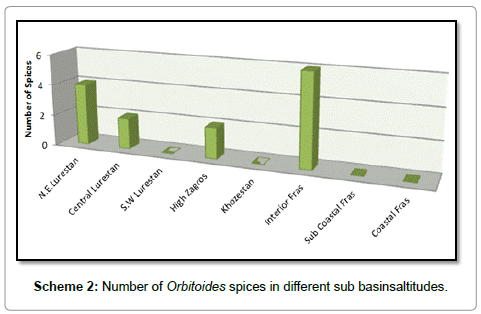 Scheme 3: The comparison of frequency percentage of Orbiroides species in different sub basins.

Decreasing of species variety like Lorestan and High Zagros might be related to the increasing of the the late Maatrichtian clastic sediments (For instance Amiran-Tabour course in Tang –e Zndan, Tang –e Vanak, Gerdbisheh, Sabz kuh, South Semirom and Naghan in High Zagros and south east and north west of Khoramabad in Lorestan) and the transition from carbonate sediments to clastic-carbonate sediments and limitation suitable living conditions of this genus. In paleofacies map Zigler, 2001 (Figure 6) we can see that Amiran clastic sediment is extension in Lorestan and High Zagros. Because the growth of Orbitoides species occurs in an environment with poor entrance of clastic sediments [20,27,38].

The variety of the species decreases from Interior Fars toward the Coastal Fars which might be because of deepening of Tarbur Formation sedimentary basin. For instance, in south Fars the larger part of biological facies consists of planktonic foraminifers and it less benthic species are seen in this area (in Gach Mountain, Kurdeh Mountain studied by Amiri Bakhtiyar [34,39]. This shows the increasing of this depth of sedimentary basin in this area. Other reason is exist Gurpi clastic sediment in Subcoastal and Coasatl Fars sub-basins that shows in paleofacies map Zigler [6] (Figure 7). Figure 7: Paleofacies of Late Cretaceous to Early Paleocene in Zagros [6].

In Maastrichtian of Khuzestan sabbasin Gurpi clastic sediment was existed. For this reason, we cannot find Orbitoides in this area. Among studied sections Dorodzan, Zarghan and Kherameh-3 sections have the most variety of species of Orbitoides genus.

Factors like local tectonic (by affecting the depth of sub-basins), temperature and type of existing sediments (Clastic or Carbonate) might affect the variety of the species (Supplementary Figure).

The paleohabitat of this genus is located in Zagros basin as the upper part of photic zone and at a depth of 80 meter. This environment is open marine with low of clastic entrance. The entrance of clastic particles in sections like Tang –e Shabikhon (Lorestan) and Gerdbishe (High Zagros) resulted in limitation of existence of this genus. The morphology (thin shell with lateral chambers) and association with Siderolites, indicate a high energy habitation with high temperature. This genus lives in reef barriers and reefs.

In Zagros basin, their habitation is in fore reef and shallow open marine. The existence of Orbitiodes in fore reef environment leads to shatter and break which has been reported in sections Chamsangar in Lorestan.

In Zagros basin paleogeographic distribution of Orbitoides is between 28? 35′ & 34′ 18′ northern altitude. In general, in contrast to other foraminifere with agglutinate wall and the same age, the abundance of this species decrease from southeast toward Northwest and this is in accordance with geographic altitude and higher temperature in Northeastern. This can be also explained by hyaline walls of this genus.

Studies on the variety of species of genus in different geographic altitude of Zagros basin showed the higher variety of them in 29? 00′ to 30? 00′ of north altitude.

In current research, existence, abundance and variety of the genus of Orbitoides are known in relation to factors like local tectonic (affecting the depth of sub-basins), temperature and the type of entering sediments.

Copyright: © 2015 Abyat A, et al. This is an open-access article distributed under the terms of the Creative Commons Attribution License, which permits unrestricted use, distribution, and reproduction in any medium, provided the original author and source are credited.