Paralleling Spatial Prevalence of Anaemia of all Districts Maharashtra, India

Paralleling Spatial Prevalence of Anaemia of all Districts Maharashtra, India

In developing countries, anemia, in conjugation with other prevalent diseases, has given rise to a significant health crisis that causes severe physical and cognitive damages. The present work aims to prevalence of anemia in India especially at district level of Maharashtra India. The study is based upon two time points of National Family Health Survey (NFHS) India. Result shows the state has higher prevalence of anaemia compare to national average of NFHS-4. The changes result shows that few districts has in improvising stage of women health but, majority of the state districts of Maharashtra highlighting a serious health picture. Out of 36 districts, 16 districts have higher prevalence more than 55% of anaemia of Maharashtra. Furthermore, the changes between 2015 and of 2020 of all districts of Maharashtra, 16 districts have shown an increase which was more than 10% than signifies serious women problems still existing in those districts, therefore a straight policy need to be implemented targeting a specific health issues and specific regions of Maharashtra.

Anemia is defined as the decrease in the concentration of red blood cells in the body, and the blood cells are not sufficient to meet the person's physiological requirements [1]. Anemia poses serious health threats to the women of reproductive age, pregnant women, and adolescent girls, which, in turn, significantly contributes to maternal deaths and morbidity [1,2]. There is evidence that maternal anemia is associated with complicated childbirth that includes the risk of preterm birth, stillbirth, perinatal morbidity, and low birth weight, and these, in turn, increase maternal morbidity and mortality rate by Alene et al, Anemia among young women is a cause of double burden firstly, it affects their cognitive development, and secondly, it has specific grave physiological outcomes, which create severe health problems in performing the daily tasks [2].

Profound studies reported that globally 16.20 billion people were affected of anaemia. It has been also suggested on an average of 16% maternal mortality and 22% of perinatal deaths occurred in developing countries since last three decades [1,3,4]. Further, anemia in pregnant women substantially contributes to maternal morbidity and mortality [2,5]. World Health Organization's estimate on anaemia in 2011 found the worldwide prevalence of anemia among pregnant women was found to be 38.2% (32.4 million), and the same among the nonpregnant women was about 29% (496.3 million) [6,7]. However, the widespread presence of anemia during pregnancy and post-partum was higher in low and middle-income countries than in high-income countries. Such imbalances were mainly caused by the differences in the dietary pattern, deficiencies in intake of micronutrient, and prevalence of infections such as malaria and hookworm in the developing countries.

In India, recent rounds of NFHS-4 reported that the prevalence of anemia was 53% among women of fertile age group [8]. Study from Bangladesh, 43.4% of women those who are less educated and undernourished were found to be anemic [9]. Iron deficiency anemia is another burden for pregnant and non-pregnant women in developing countries [10-13].

Epidemiological studies pointed out that several influences for developing anaemia among reproductive women were found such as women's age, place of residence, and smoking habits [2,14]. In developing countries, anemia has several deleterious health risks associated with it: low dietary intake of iron, past records of illness due to chronic disease, excessive menstrual bleeding, and history of malaria, history of abortion, genetic disorder, diarrhea, food fortification, and blood loss during labor, close-spaced of pregnancies [15-17]. Besides the direct reason, there is also some indirect basis such as educational attainment; regional and biosocial factors, which include the BMI status of women.

Evident research of anemia among the populations of Maharashtra India. The National Family Health Survey of India (2016) is crucial as it showcases the national data on various characteristics related to the health of women who belong to the reproductive-age [8]. It also provides useful data besides anemia, child health, maternal health, and nutrition among women of reproductive age. Hence, considering all this information, this present study is designed to examine the spatial prevalence of anemia among women of childbearing age in all districts of Maharashtra India, which have not been investigated yet comparing national representative sources.

The present study uses collected data of NFHS-4 2015-16 of eligible women. This survey provides useful information about the basic demographic and health indicators related to men, women, and children. The complete survey data set is publicly available in the DHS program website upon subsequent authorization and registration, followed by an official protocol (DHS, 2016). For comparing with previous data of NFHS-4, we use existing literatures and recent published novel reports of NFHS-5 (Fact sheet) (2019-2020).

A bivariate analysis also executed to understand prevalence of anemia in Maharashtra. For representing spatial prevalence we use spatial software packages. Additionally analysis of data was carried out on STATA version 14.

Prevalence of anaemia among reproductive age women of Maharashtra, India

Table 1: Percentage prevalence of anaemia of all districts of Maharashtra, India.

Spatial prevalence of anemia among married women of Maharashtra, India 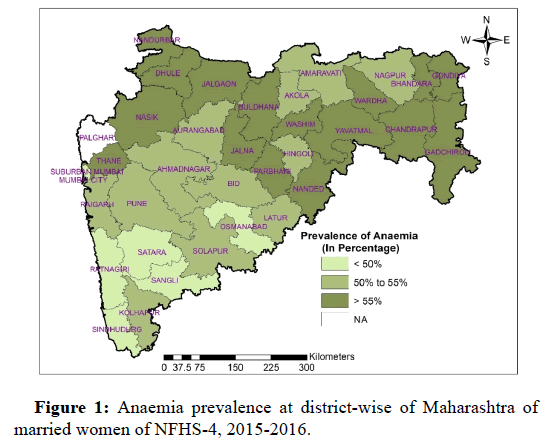 Figure 1: Anaemia prevalence at district-wise of Maharashtra of married women of NFHS-4, 2015-2016. Figure 2: Anaemia prevalence at district-wise of Maharashtra of married women of NFHS-5, 2019-2020. 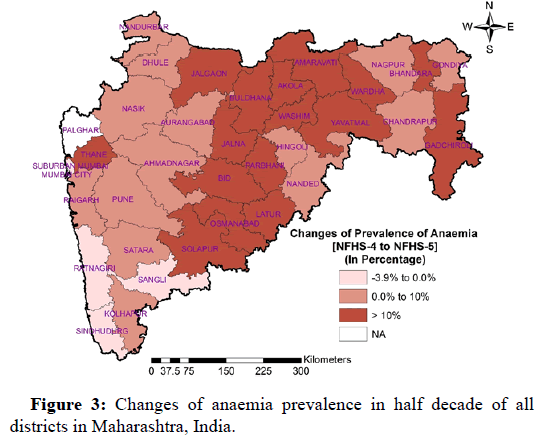 Figure 3: Changes of anaemia prevalence in half decade of all districts in Maharashtra, India

The present study was carried out to recognize the prevalence of anemia among the married women at districts level of Maharashtra in last half decade of NFHS, India. Further, this study expressed spatial maps in order to highlight spatial prevalence and variation over districts of Maharashtra. The analysis has been carried out using NFHS-4 data of all districts of Maharashtra and tried a spatial comparison with latest published reports of NFHS-5 fact sheet literatures of India. Anaemia is one of the major public health issue of married women of India and across states and Maharashtra has not found dissimilar results. Given the fact that of 54.2% women are anaemic in Maharashtra which (high prevalence) indicates a severe public health problem out there in studied regions (National Family Health Survey (NFHS-5), 2020). Although the recent report of NFHS 2016 shows the prevalence of anemia (48%) is in Maharashtra state lower than national average (53%) (IIPS and IFC, 2016, 2017). But the degree of prevalence anaemia is varied across states of India [18]. Therefore, there is existing discrepancies in anaemia prevalence within regions and over districts. Profound studies have found that the anaemia is more prominent in younger age group compare with other age groups [7,19]. Likewise, other study shows that young women are substantially more likely to suffer from anaemia but opposite for pregnant women [18]. This is due to of pregnant women are usually given more care than any other age group of women. However, distinctive association were found with women pregnancy and developing anaemia in Ethiopia and Nepal [20,21]. This could be due to distinguish socio-cultural settings of the study population.

On the other hand, other cross-sectional and community-based studies have shown prevalence of anemia was relatively low among adolescent and late adolescent women in India [17]. Such disparity because of study area selection by researchers which found to be dissimilar with usual findings [7,22]. Similarly, few International studies have also shown that about 57% prevalence of anemia in Bangladesh at reproductive age women and whereas in Pakistan, it is as high as 51.1% and about 41% in Nepal [1,23,24]. Nevertheless, the differences in the prevalence of anemia point to the heterogeneity in the health conditions within the same regional settings of South-East Asia [1]. These inequalities were observed in across the states of India like Maharashtra, Manipur and Nagaland [25-27] and Karnataka.

Throught this study, women from low economic status, past birth recode more than three children are significantly associated with developing anaemia. Thus, besides low wealth status of women, the health status in northestren states women of India reflecting gender discrimination of both biosocial characteristics and socially within household and in society. Therefore, among factors nutritional deficiencies contribute to the onset of anaemia which may leads to iron deficiency anemia. On the contrary, present study show that being users of traditional (10% higher) family planning methods are associated with developing anaemia than modern contraceptive method. This finding is consistent with study from eastern Africa where use of modern contraceptive methods with lower prevalence with anaemia [28-31].

The study emphasizes that there is a need for comprehensive intervention and developing strategies that will make women aware of the negative impact of anemia. The proposed strategies considered an intervention approach and includes following elements:

1. State and vulnerable regions should adopt quality and modern strategies and build local training institute that aim to reach all segments of population with acceptable and affordable environment.

2. Iron supplementation should facilitate and make sure of expansion of fortification cereal flour with iron. It will help to increase sustainable iron in food for longer time.

3. Through this crucial findings we can recommend for policy advocacy in benefit of women health (including girls and pregnant). Since government has initiated special program of Integrated Child Development Schemes and Information Communication and Technology to create various health awareness programs and hygiene associated issues among women. Government should adopt these study outcomes before implement any project of these regions targeting to combat anaemia.

This research does not have an ethical code because this research work was performed based on secondary data, which is freely available in the public domain; thus, the authors do not require any ethical clearance and consent to participate. For more information about data: https://dhsprogram.com/data/dataset_admin/index.cfm

The authors declared no potential conflicts of interest with respect to the research, authorship, and/or publication of this article.

Similar to other study, this study has also some limitations. Primarily present study is comparing with recent published fact sheet of nfhs 5 but that has only 21 states/union territories. The study is based on overall women of Maharashtra which may give insignificance result with final reports; therefore, it is quite difficult to comprehend those identified district results with or are in real and inappropriate for generalization with all women in India.

Findings of the present study indicating that anemia is one the major problems in majority districts of Maharashtra India. The changes result shows that few district has come-up with good outcomes in terms of women health. Districts like Washim, Wardha, Budhana districts show positive changes, which noiselessly indicate a serious health problems might be occurred than other districts of the state. However, other side, districts like Ratnagiri, Mumbai city, Sindhudurg have showing a positive and successful health pictures especially women health status than other districts of Maharashtra. Further, Figure 3 displays out of 36 districts, 16 districts have shown an increased mood from nfhs-4 to nfhs-5, therefore a strong and sustain, policy needs to be implemented targeting a specific health issues in specific regions.

Copyright: © 2021 Mog M, et al. This is an open-access article distributed under the terms of the Creative Commons Attribution License, which permits unrestricted use, distribution, and reproduction in any medium, provided the original author and source are credited.