Perceptions and Use of Medicinal Herbs among College Students at a Jordanian University in Amman-Jordan: Traditions Supersedes Education

Copyright: © 2016 Abdelmalek SMA, et al. This is an open-access article distributed under the terms of the Creative Commons Attribution License, which permits unrestricted use, distribution, and reproduction in any medium, provided the original author and source are credited.

Herbs are a valuable source of remedies in many cultures worldwide. Human beings used herbs for culinary as well as curative purposes for several thousand years [1]. Herbal medicine is a popular branch of alternative medicine. It offers an alternative to the increasingly ineffective drugs. According to the World Health Organization (WHO) more than three-quarters of the world’s population rely on traditional medicine, mainly medicinal herbs [2]. Arabs are no exception to this; they used herbal medicine long time ago. In fact, the traditional Arabic and Islamic medicine is based on the use of a single plant or a mixture of plants to treat diseases [2]. Medicinal herbs fall under the category of traditional nutraceuticals that have been used in prevention and treatment of several non-infectious (e.g., diabetes [3], depression [4], insomnia [5] and dyslipidemia [6]) as well as infectious diseases [7]. Their action is fundamental when considering patients who are intolerant to certain medications [6].

In the international setting, use of herbs was investigated among various populations; young and elderly. In the Middle East, many studies discussed use of medicinal herbs among adult populations [1,8-11]. Nonetheless, little is known about herbs use among college students in this region of the world. Being a wide societal segment, it is important to understand college students’ health patterns and practices. They are young, active and more approving of new approaches to health care [12,13]. Besides, students can play a significant role in the spread of health-related information to the society particularly if they will become members of the medical field.

In the Arab world, however, strong connections between family members prevail. Siblings are adherent to their families and show respect to their ancestors’ experiences [14]. This led to the assumption that herbal use among Arab students would be influenced by their families. The current study is set to assess the awareness, perceptions and use of medicinal herbs among students at University of Petra, Amman, Jordan. It also aims at identifying factors that impact use of herbs, and examines the assumption that cultural beliefs and ancestors’ advice have a greater influence over students’ herbal use practices compared to education.

A cross-sectional self-administered questionnaire-based survey was conducted between October 2009 and January 2010. The study proposal was reviewed and approved by the Scientific Research Council at the University of Petra.

The sample involved university students from pharmacy and non-pharmacy faculties, namely; the faculties of Arts and Science and Information technology, at the University of Petra-Amman, Jordan. Pharmacy students were randomly enrolled from second, third and fourth year levels. This was intended in order to reflect the impact of education on herbs use, as the pharmacy program includes three academic courses on herbs introduced at the third year level. These courses are a pharmacognosy course, that introduces students to medicinal herbs, their constituents, methods of collection, drying, preparation, and preservation, as well as uses, and two phytochemistry courses (1&2), that focuses on the biosynthesis and the chemical and physiochemical properties of the principal classes of natural mixtures used in therapy.

The students were invited to participate in the study and verbal consent was sought before handing in the questionnaires, confidentiality and anonymity of the results were assured. To organize the process of questionnaire distribution and prevent overlap or repetition, questionnaires were given simultaneously to all students attending lectures from 9 to 10 am and collected at the end of the lecture.

The questionnaire was constructed upon reviewing relevant literature. It was field-tested to assure its applicability and comprehensiveness. The questionnaire was primarily written in English, and then translated into Arabic; the mother tongue spoken in Jordan. Translation was validated by a fluent speaker of both languages. The questionnaire comprised of 26 questions, which enquired about students’ demography, specialty and year of study, medical insurance status and having a physician in the family. It also asked about relatives’ use of herbs and whether herbs were used for culinary or medicinal purposes. Sources of information about medicinal herbs were investigated by giving students the choices of family, physicians, university education, or media (television, radio, newspaper) to choose from. Moreover, it explored the use of herbs as an alternative to drug therapy, as a prophylaxis versus treatment, and as self- directed therapy versus visiting a doctor. Also students’ knowledge of the proper uses of certain herbs in the management of common diseases was explored. This was by providing a list of commonly used herbs in the local setting (e.g., chamomile, thyme, sage, mint, green tea, cinnamon, cardamom and senna) and diseases (e.g., upper respiratory tract infections, abdominal pain, constipation, weight loss, insomnia, headache, and diabetes) to match. The method of preparation of herbs (infusion versus decoction) and whether any education was received in this regard were also investigated.

Data were entered onto and analyzed for frequencies using Microsoft Office Excel 2013. Statistical significance calculated using χ2 test on SPSS. Significance was defined as a p value ≤ 0.05. Missing data were omitted from the analysis, which were believed to be minimal.

Three hundred and fifty students participated in this study. The sample consisted of two groups; pharmacy students (n=168) and non-pharmacy students (n=182). Pharmacy students were distributed as 53 (31.5%), 73 (43.5%), and 42 (25%) in second, third and fourth year levels, respectively. More than half of sample have no medical insurance. Both student groups were similar in terms of having a doctor in the family (Table 1).

Table 1: Demography of the study sample.

*Only yes answers are recorded.

Table 2: Perceptions* and use of medicinal herbs among the study sample.

Table 3: The use of Medicinal herbs by pharmacy students as classified by study year.

Determinants of using medicinal herbs: Insurance status was found to be inversely correlated with the use of medicinal herbs. Uninsured students reported a significantly higher level of herbal use (p<0.001) compared to insured ones (Figure 1). Insurance also significantly (p<0.001) determined the tendency of students to visit doctors for treatment. 28.4% have insurance and go to the doctor versus 13.7% don’t have insurance and go to the doctor. 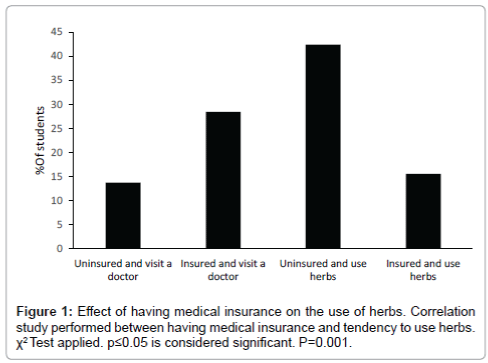 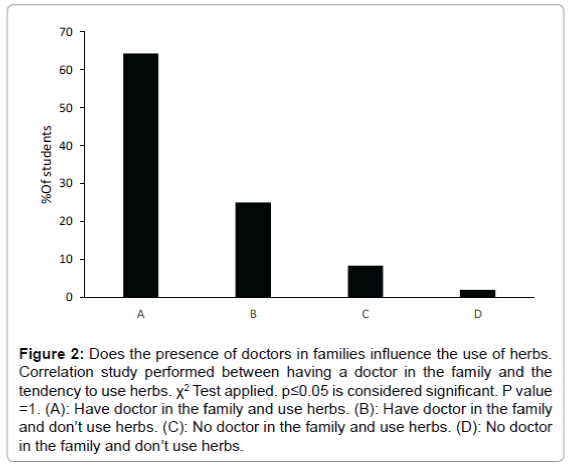 *Participant could choose more than one of the listed sources of information.
†2nd, 3rd, 4th: Study year.

Physicians were not considered as a source of information on medicinal herbs by any of the sample. Seventy percent of students who visited doctors stated that even when physicians asked about herbal use they did not provide relevant advice nor education. 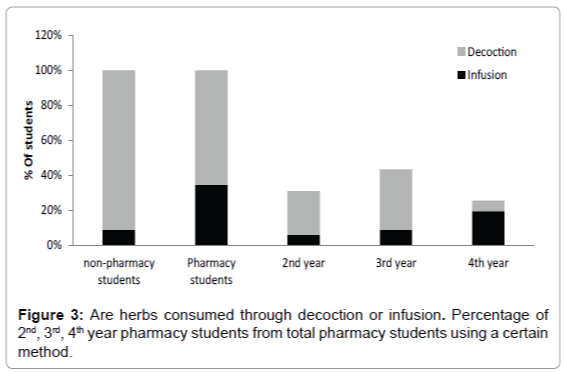 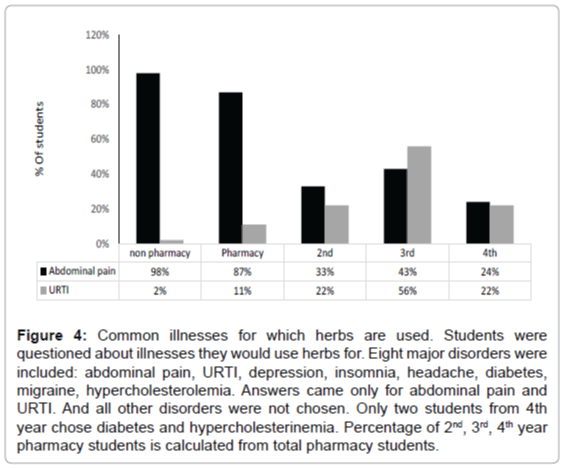 Figure 4: Common illnesses for which herbs are used. Students were questioned about illnesses they would use herbs for. Eight major disorders were included: abdominal pain, URTI, depression, insomnia, headache, diabetes, migraine, hypercholesterolemia. Answers came only for abdominal pain and URTI. And all other disorders were not chosen. Only two students from 4th year chose diabetes and hypercholesterinemia. Percentage of 2nd, 3rd, 4th year pharmacy students is calculated from total pharmacy students. 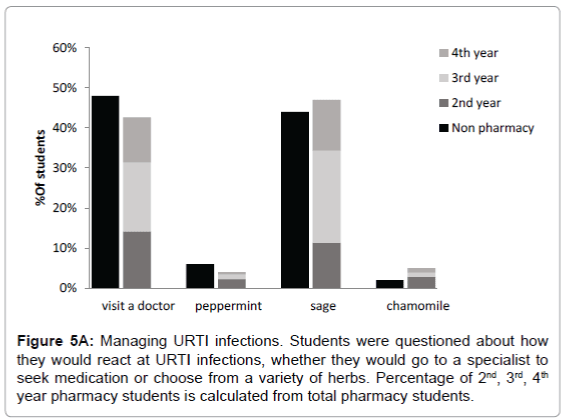 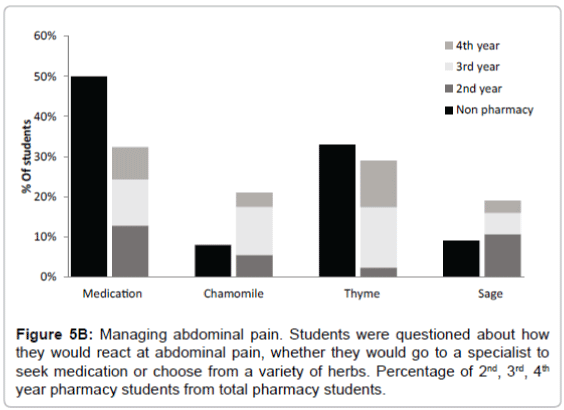 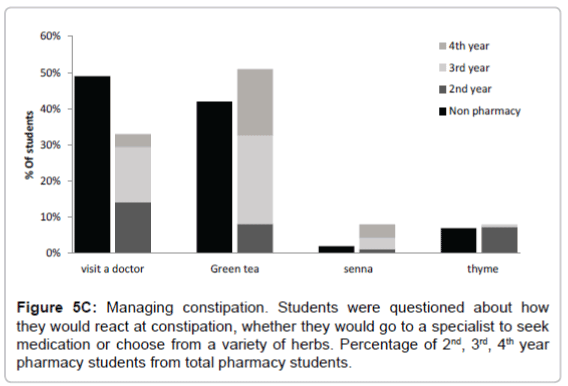 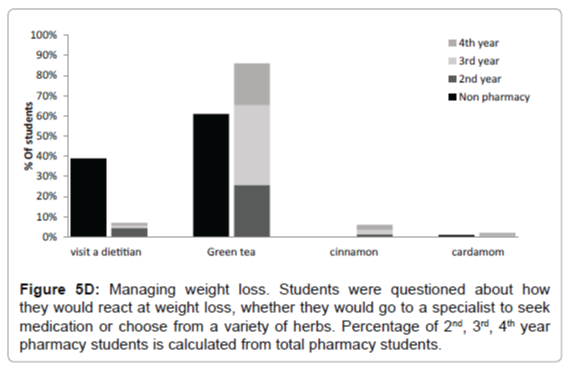 Use of medicinal herbs is prevalent between college students in this study, which complied with a previous Jordanian study [15]. Our assumption that students’ use of medicinal herbs is positively affected by their families proved to be valid. Yet, a major determinant that affected herbal use, whenever provided, was education. A proof of this is the resemblance in responses between second year pharmacy and nonpharmacy students. Being not yet exposed to herbs-relevant academic courses at their second year of study rendered them depending on their families to obtain information about herbs. Whereas third year pharmacy students showed more awareness of the medicinal uses of herbs, their prophylactic and treatment effects compared to second and fourth year students. However, when it comes to the handling of herbs, education didn’t seem to correct faulty cultural believes. It is known that herbs containing volatile oils decompose and/or lose activity if exposed to high temperatures for long periods [16]. Having the majority of students in this study boiling herbs before use revealed unawareness of proper preparation.

The indications for medicinal herbs reported herein were much fewer than those named in other studies [14,17]. While most participants in this study agreed that herbs are mainly used for abdominal pain and URTI, participants in a similar study carried in the USA indicated that the most frequent conditions for which herbs are used, musculoskeletal conditions, stomach or intestinal illnesses, anxiety/depression, insomnia, severe headache or migraine, menopause, cholesterol, and recurring pain [17]. This reflected the unawareness of the current study population of the potential uses of herbs. In fact, having a minority of pharmacy students acknowledging the role of herbs in the management of diabetes and dyslipidemia indicated substantial unawareness of medicinal herbs use. The choice of correct medicinal herb in treating some common illnesses constituted another challenge to non-pharmacy and pharmacy students. The use of sage for respiratory conditions is an incorrect practice. Sage is mainly indicated in cases of fever, digestive disorders and stomachache [18]. Similarly, the use of thyme to treat constipation is a suboptimal practice, as senna proved to be more effective [19].

It was interesting to note that the presence of a physician in a family did not affect the use of herbs. This could be explained by the lack of physician input into patients’ education on the use of herbs as shown in the results. The literature showed how health care professionals, among which physicians, could play an important role in raising public’s awareness on the proper use of herbs in treating diseases [20].

Despite the proven benefits from using medicinal herbs, the potential harm associated with their use should be emphasized [21], having a majority of students preferring the use of herbs, because they believed they were safe, is a prevalent misconception. In fact, there is an increasing concern about the safety of some medicinal herbs. Accidental herbal toxicity occurs not only as a result of lack of quality control over harvesting and preparing herbs, but also due to the false belief they are harmless [21].

Lack of insurance and the low income per capita evident in Jordan supported the use of herbs. This was further endorsed by the fact that those who had medical insurance reported using medicine over herbs to treat illnesses.

Limitations to the study are those expected with self-administered surveys, first, where students might have over or under reported their use of herbs. Second, the fact that there are too many herbs sold in the market used for a wide array of indications and not all of them were listed in our study. However, we chose the most popular ones that are believed to be known by everyone regardless of their background and used for very common illnesses.

The use of medicinal herbs among students is prevalent. The influence of traditional beliefs on use of herbs is substantial. However, whenever education is provided it does shape practices relevant to herbs. Yet gaps in the awareness of the potential uses of herbs and their proper preparation are evident. More relevant education and hands-on practice are required to fill these gaps.