Tef is one of the most important staple food crop cultivated throughout the country. Nine tef varieties were brought from Debre Zeit Agricultural Research center and planted with one local check in randomized complete block design (RCBD) at yabello Pastoral and Dryland Agricultural Research Center main site for three consecutive years. The result of analysis revealed significant differences among genotypes in grain yield and biomass for all year under study. Tsedey was performed than other genotypes in 2011 cropping season in which low rainfall was recorded for the study area. Magna was performing well in study area relative to other genotypes in all cropping seasons except 2011 cropping season.

Tef (Eragrostis tef (Zucc.) Trotter) (2n =4x =40) classified under poaceae family and Eragrostis genus. Tef is an annual cereal crop most poaceae family and Eragrostis genus. Tef is an annual cereal crop most widely grown over broad environmental conditions. Its owes its center of origin and diversity in Ethiopia and is widely cultivated throughout the country as a staple food crop [1]. The harvested caryopsis is chiefly used for preparing "injera" (a flat, circular and very soft bread), porridge, and sometimes alcoholic drinks. The bread made of tef flour, "injera", is the mainstay of the Ethiopian diet [2-4]. The nutrient composition of tef grain has high potential to be used in foods and beverages worldwide [5]. Tef annually occupies over 29% of the entire field and contributes approximately 19.33% of the gross grain output of all cereals in Ethiopia [6]. The production area of tef is increasing in extraordinary scale due to increased market demand, higher nutritional value, low incidence of damage by insects, better adaptation to drought and high value of straw [3].

The performance of one genotype differ significantly from environment to environment [7]. Tef performs in different environments differently. Genetically, tef is adaptable to a wide range of environmental conditions and even under unfavorable environmental condition. It can be grown at altitudes ranging from near sea level to 3000 mas, but it performs well between 1100 and 2950 masl [2]. Despite its versatility in adjusting to different environmental conditions, the productivity of tef in Ethiopia is very depressed with the national average standing at 1.5 t/ha [8]. In moisture stress areas of southern Oromia is lower than the average grain yield, which may be due to lack of improved varieties, non-adoption of improved technologies, disease and pests are some of the most serious production constraints. Currently different varieties of tef have been released from the regional and Ethiopian Agricultural Research Institutes [9]. Even though some varieties of tef have been released in Ethiopia, most of them were not evaluated around moisture stress areas of southern Oromia. So, the following experiment is objected to evaluate and recommend best performed tef genotypes with better performance and adaptability for the tef growers of moisture stress areas of Southern Oromia. 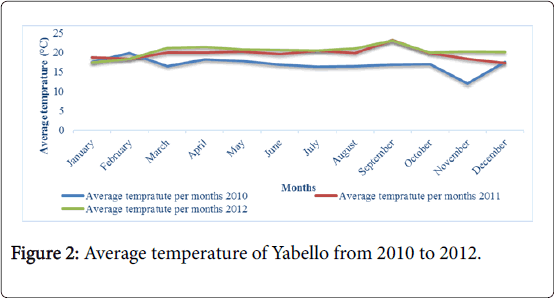 Nine improved tef varieties were brought from Debre Zeit Agricultural research center (Table 1). A total of ten varieties, including local check were planted in a RCBD with three replications at Yabello Pastoral and Dryland Agricultural Research Center main site from 2010 to 2012 cropping seasons. Each variety was planted in plot area of 12 m2 on plot size of 3 m height and 4 m width and sown in hand broadcast method. All agronomic practices were equally performed for all treatments as per recommendation.

• Days to flowering: the number of days from 50% of the plots showing seedling emergence up to 50% of the plants in the plot flower.

• Days to maturity: the number of days from 50% of the plots showing seedling emergence up to 50% of the plants in the plot reaching phonological maturity stage (as evidenced by eye-ball judgment of the plant stands when the color is changed from green to color of straw)

• Plant height (cm): measured as the distance from the base of the stem of the main tiller to the tip of the panicle at maturity

• Panicle length (cm): the length from the node where the first panicle branch starts up to the tip of the main panicle at maturity

• Number of fertile tillers per plant: the number of panicle-bearing (fertile) tillers produced per plant

• Total biomass (g): the weight of all the harvestable area including tillers harvested at the level of the ground.

• Grain yield (g): the weight of grain yield for all the harvestable area of plot.

Harvest Index (HI): the value computed as the ratio of grain yield to the total (grain plus straw) biomass multiplied by 100.

The collected data were subjected to analysis of variance (ANOVA) as suggested by using SAS Software (Version 9.0) [10]. Mean separation was carried out using least Significant Difference (LSD) at 5 percent level of significance.

Analysis of variance showed a significant difference among tef genotypes at (p<0.05), for days to maturity, biomass and grain yield for all cropping seasons (Table 2). Fentie et al. [11] and Yasin and Agedew [12] also reported considerable variation in the days to maturity, plant height and spike length and grain yield of different Tef varieties when planted over years.

In days to flowering, significant difference was observed in 2011 and 2012 cropping seasons (Table 2). Early flowering was recorded for Tsedey (25.33 days) in both seasons while local check (45 days) was flowered later than all varieties. Fentie et al. Plaza-Wüthrich and Aliyi et al. [11,13,14] also reported significant difference among the tested varieties for days to flowering.

Plant height: Analysis of variance showed a significant difference among tef varieties under study in 2010 and 2011 cropping seasons. The longest variety was Magna (99.80 cm) followed by local check (99.20 cm) while the shortest variety was Tsedey (52.13 cm) (Table 2). The longest variety is susceptible to lodging while the shortest variety is resistant to lodging. Yasin and Agedew [12] and Aliyi et al. [14] reported significant plant height among different tef varieties. In contrast to current finding, Fentie et al. [11] reported non-significant difference among tef varieties over years in plant height.

Grain yield: Significant difference were observed for tef varieties under study in grain yield (p<0.001). The highest grain yield was recorded for Magna (2.03 t/ha) followed by Local (check) and Tsedey (1.79 t/ha) in 2010 cropping season. In 2010 cropping season there was relatively highest rainfall distribution. In 2011 and 2012 cropping seasons, there was lower rainfall distribution in study area, in these seasons Tsedey yield the higher grain yield (1.34 t/ha) and (1.57 t/ha) respectively. The lowest grain yield was recorded for Key Tena (0.57 t/ha) across all locations. Fentie et al. [11]; Aliyi et al. [14] and Yasin and Agedew [12] reported significant grain yield among different tef varieties.

Analysis of variance showed significant different for all year in biomass and grain yield. From the result different teff varieties interact to the study area differently. Based on days to maturity, Tsedey (79.67 days) was found to be the earliest maturing variety with relatively higher grain yield while local check (95.67 days) was late matured than all other varieties. Magna performed best and high yielder in good rainfall spreading season while Tsedey performed better in low rainfall spreading season. The result of the study revealed, recommendation of varieties is depending on rainfall distribution of study area. Based on rainfall forecast of national metrological agency of Ethiopia Tsedey is recommended for low rainfall distribution season (moisture stress) while Manga recommended for season relatively good rainfall distribution seasons.

Copyright: © 2018 Bakala N, et al. This is an open-access article distributed under the terms of the Creative Commons Attribution License, which permits unrestricted use, distribution, and reproduction in any medium, provided the original author and source are credited.