PI3K/AKT/mTOR Pathway in ATLL: from Basic Biology to Preclinical Study

PI3K/AKT/mTOR Pathway in ATLL: from Basic Biology to Preclinical Study

Adult T-cell leukemia/ lymphoma (ATLL) is high resistance fatal malignancy which has a poor prognosis and exhibits resistance to conventional chemotherapy. The development of novel therapies for ATLL relies on a comprehensive understanding of the occurrences that result in cellular survival and proliferation regulating pathways that control growth signals is an emerging and complementary approach to ATL treatment. The PI3K/AKT/mTOR is a pivotal gatekeeper for cell growth, viability, migration, proliferation, and development drug resistance. Activation of PI3K, AKT, mTOR regulates important genes and proteins like mTOR, p53, NF-κB, P27, P21, S6K, FKHR and BAD. So this rout has a central role in handling cell cycle regulators, transcription factors and anti-apoptotic proteins. This review focuses on the role of PI3K/AKT/mTOR in ATL progression and development drug resistance.

Human T lymphotropic virus type 1 (HTLV-1) is the earliest human retrovirus discovered from the deltaretrovirus family and is estimated to infect approximately 10–20 million of all people, however only 3-5% will eventually progress to adult T-cell leukemia/ lymphoma (ATLL) or tropical spastic paraparesis/HTLV-associated myelopathy (TSP/HAM) [1-3]. Survival of patients with ATLL is considerably low. The average survival of these patients is only 13 months [6-8]. So it is an emergency to provide effective and novel therapy for this patient. One of the pathways that have a central role in cell survival and proliferation is PI3K/Akt/mTOR pathway that has especially role in tumorigenesis [9-14]. There are many studies that proved the role of this pathway in malignancies such multiple myeloma [15-17]. This review especially focuses on the role of PI3K/Akt/mTOR in ATL.

HTLV-1 is one of the members of the retrovirus family. Like other retroviruses, a proviral genome of HTLV-1 has structural genes, pol, gag and env, along with long terminal repeat (LTR) at both ends [18-20]. The diagnostic feature of the HTLV-1 proviral genome is the existence of pX region between env and 3’ LTR and encoded several adornment genes, which comprise tax, rex, p12, p21, p30, p13, and HTLV-1 bZIP factor [21-23]. Between these viral proteins, HBZ and TAX play significant roles in the cellular transformation and the activation in T-cell [24,25].

From diverse proteins that code by HTLV-1 genome, HBZ is the only protein expressed in all ATL cases without mutation in other hands, wild-type expressed [26,27]. There are two types of HBZ in ATL, spliced sHBZ and unspliced HBZ, which differs in 7 amino acids [28- 30]. Both HBZ isoforms consist of three domains: activation domain (AD), central domain (CD), and basic leucine zipper domain (bZIP). HBZ encompass a functional nuclear export signal (NES) sequence within its N-terminal region that disrupts the cellular autophagic response in the cytoplasm. In addition, three nuclear signals (NLSs) exist that responsible for nuclear localization of HBZ protein. There is the sp1 region in 3’ LTR of HTLV-1 have been shown to be necessary for HBZ promoter activity [31-33].

Diver’s function of HBZ in ATL was recognized, these functions occurred by interaction with several proteins. HBZ suppresses the p53 expression induced by ATF3 via binds to ATF3/p53 complexes [34,35]. Both BCL2 and Flip could be expressed via induction by HBZ. HBZ also has a role in decreased activation of P53 through binding to p300/ CBP, inhibits p53 acetylation and deregulates the p53 activity [36,37].

Several studies were showed the pleiotropic function of TAX in tumor genesis. CREB/ATF, SRF, and NF-kappa B-associated pathways are regulated by TAX, so TAX is able to modulate expression of many viral and cellular genes [38-40]. Tax also downregulate the function of various regulatory proteins via direct protein-protein interaction. Tax forces the infected T-cells into unstoppable replication and interfering with the function of telomerase and Topoisomerase-I via inhibiting DNA repair [41-43].

In several cancers especially hematologic cancers role of PI3K/Akt/ mTOR in tumorigenesis were highlighted [44-49]. This pathway from diver’s mechanisms helps to cancers to be more aggressive through increase proliferation and promote viability [50-52]. These functions earn from interacting with important cellular proteins like cell cycle regulators, anti-apoptotic proteins and transcriptional factors. PI3K is an extracellular sensor of this rout [53]. When growth factors like PDGF or FGF bind to its surface receptor PI3K activated and stimulate AKT [54,55]. AKT is an effector of this pathway, which has a diverse function. In terms of anti-apoptotic effect, anti-apoptotic effects of FLICE-like inhibitory protein (FLIP) and cIAP2 and XIAP is improved by AKT [56,57]. AKT also suppresses pro-apoptotic proteins like FAS, BIM and BAD [58,59]. Phosphorylation of BAD by AKT leads to stabilization of BCL-xL [60,61]. AKT activates NF-kB indirectly via phosphorylation of IKK. AKT also controls cell cycle through interaction with main cell cycle regulators like P27, P21, and P53, which can induce cell cycle arrest [62-64]. AKT stimulates suppression of P53 through activation of murine double murine 2 (MDM2) [65,66]. AKT induces activation of mTOR via 3 ways, phosphorylate TSC2, inhibition PRAS40 and enhance the nutrition level by stabilizing GLUT1 in cell surface [67,68].

mTOR is the last component of this pathway. There are two types of mTOR complex that is different in ingredients and functions. The main mTORC1 components include mTOR, Raptor, and mLST8/GbL and the mTORC2 ingredients are mTOR, Rictor, and mLST8/GbL [69,70]. First different between mTORC1,2 is sensitivity to rapamycin (mTORC1 is sensitive and mTORC2 is resistance). The substrates of mTORC1 are p70S6K and 4E-BP1. But substrates of mTORC2 are protein kinase C-a (PKC-a), serum- and glucocorticoid-inducible kinase (SGK), and AKT [71,72]. mTORC1 as a sensor of nutrition level in a cell, which responsible for protein synthesis and proliferation [73- 75]. Phosphorylation of S6K (ribosomal S6 kinase) activates ribosome biogenesis, and phosphorylation of 4E-BP1 (eukaryotic translation initiation factor 4E [eIF-4E] binding protein 1) inhibits its binding to eIF-4E [71-77]. Promoting cap-dependent translation is occurred through Liberation of eIF-4E and then participate in a translation initiation complex. mTORC1 enhances cell cycle proteins like myc and cyclins [78,79]. mTORC1 has an anti-apoptotic effect by enhancing expression anti-apoptotic protein MCL-1. Furthermore, mTORC1 indirectly inhibits apoptosis signal-regulating kinase 1 (ASK1) [80,81].

Scientists were proved a special role of PI3K/Akt/mTORC1 in ATLL [82,83]. This pathway could be activated via a diver’s mechanism like activation of HBZ or TAX [84]. Mutation of the chemokine receptor CCR4 also lead to activation of PI3K and stimulate activation of PI3K/ AKT/mTORC1 pathway in addition, TAX can activate this pathway from two different ways 1: Through stimulating of RAS signalling. 2: By inhibition of PTEN (a PI3K inhibitor) [85-87]. HBZ also stimulate activation of downstream of mTOR through interaction with GADD34 [88]. In HTLV-1 Loss of N-myc downstream regulated gene 2 (NDRG2), a negative regulator of PI3K, enhanced activation of the NF-κB pathway by PTEN and NIK phosphorylation for ATL [89].

A diverse study showed a particular role of PI3K/AKT/mTOR in ATLL. When they inhibit these route, the proliferation of HTLV-1 cell line was suppressed [90]. In HTLV-1, PI3K/Akt/mTOR activity result in stimulation activity of NF-kB and triggers transcriptional factor like activator protein 1 (AP1) and also reduces cell cycle inhibitors like P53, P27, P21. In addition, AKT regulates apoptotic pathway via promotes anti-apoptotic proteins such as BCL-xL and deregulate pro-apoptotic proteins like BAD and BAX (Figure 1) [91]. 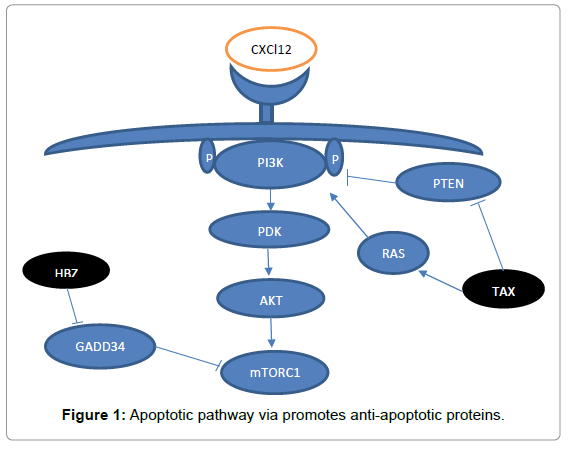 Copyright: © 2019 Naghinezhad J. This is an open-access article distributed under the terms of the Creative Commons Attribution License, which permits unrestricted use, distribution, and reproduction in any medium, provided the original author and source are credited.