Copyright: © 2012 Tomar A, et al. This is an open-access article distributed under the terms of the Creative Commons Attribution License, which permits unrestricted use, distribution, and reproduction in any medium, provided the original author and source are credited.

Spray forming technique was employed to produce a disc shape preform of Al-Si-Pb alloys. Porosity of this disc was investigated as a function of lead content and the distance from centre to periphery of the disc. The porosity decreases with distance from centre to periphery for all compositions of lead. The decay rate in porosity increases with the increase in lead content. Also the decay rate in porosity decreases towards the periphery of the deposit. The areas having large and small amount of porosity were observed in the microstructure of Al-Si-Pb alloys. The large and small amount porosity areas belong to the lead and aluminum rich areas, respectively.

Aluminum based alloys have the advantage of high strength to weight ratio, and therefore they are widely used in the automotive and aerospace industries. The liquid immiscible alloys based on Al– Pb system are potential materials for bearing alloys [1-6] because they possess superior performance like superior friction properties, low cost of production, high thermal conductivity and high corrosion resistance than other aluminum bearing alloys [4,5,7,8]. Processing of Al–Pb alloys by the conventional casting techniques is difficult due to liquid immiscibility in a wide range of temperature and composition; and also large density difference of the constituent phases compared to Al alloys [6,7]. Early attempts to synthesize these alloys by the conventional casting routes had limited success. A slow cooling rate associated with conventional casting processes results in rapid separation of Al and Pb-rich phases [4,9]. In the past, several techniques, different from conventional casting, have been employed to prevent segregation of lead during melt solidification. Techniques based on powder metallurgy [5], stir casting [2,5,6], rheocasting [7], melt spinning [10] and spray forming [4,9], results in a uniform distribution of lead particles in Al matrix. However, some of these techniques are often associated with either a higher energy consumption or generation of coarse grain microstructures. Among these techniques, spray forming possesses several advantages in effective microstructural control together with producing a near-net shape [11-15] preform in a less number of processing steps. Rapid cooling associated with solidification of atomized droplets and a turbulent fluid flow condition on the deposition surface minimizes the separation of the Al- and Pbrich phases [9,16].

In the present work, Al-Si-Pb alloys were spray formed in the form of a disc. The change in porosity with distance from centre to periphery of the deposit and its variation with lead content are reported.

A Schematic of spray forming set-up is given elsewhere [17]. The base alloy composition (wt. %) used in the present work consisted of Al-6Si. The alloy was super heated to 200°C above its melting temperature in graphite crucible using an induction furnace. Different amount (0, 10, 15, 20, 25 wt. %) of lead was added in the Al-Si alloy before atomization of the melt. In each run, 800 gm of Al-Si-Pb alloy was charged in crucible. Nitrogen gas was supplied for atomization prior to melt flow. The atomization was carried out at a N2 gas pressure of 10 bar. The spray droplets were deposited over a rotating (240 rpm) copper substrate centered along the axis of the atomizer, which was either inclined to 0°, 15° and 30° or/and offset at a distance of 40 mm from central axis of the atomizer to achieve a disc shape preform for different experimental runs. Preforms were taken out of the substrate after deposition.

In order to investigate porosity, samples were cut from centre of spray deposit with 10, 15, 20 and 25% Pb and then prepared by using standard metallographic technique. These samples were examined for surface porosity by image analysis using the optical microscope ‘Olympus model PM-3-311U’ in conjunction with a computer having image analysis software from ‘Dewinter material plus’.

Surface porosity variation with distance from centre to periphery of the spray deposit was examined by Scanning Electron Microscope (SEM) JEOL JXA 840A.

To measure total porosity at different locations of the deposit, samples were cut from different locations as shown in Figure 1. The measured density was determined by Archimedes principle and followed by the ASTM B 328-96 practice. Mean values of three measurements were taken and hence the observed values are equal to mean ± δ. Where δ is the deviation from the mean value. 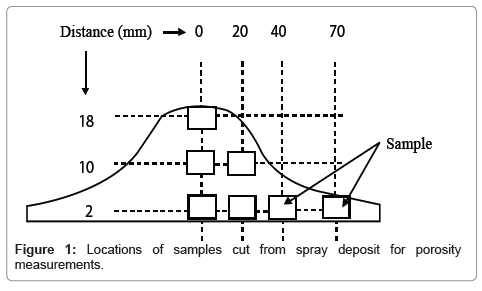 Corresponding theoretical densities calculated by mixture rules for all the alloys and mean value of measured densities with their location are reported in the spray deposit in Figure 2. The deviation of mean value (δ) was found to vary between 0.004 to 0.01 gm/cc. 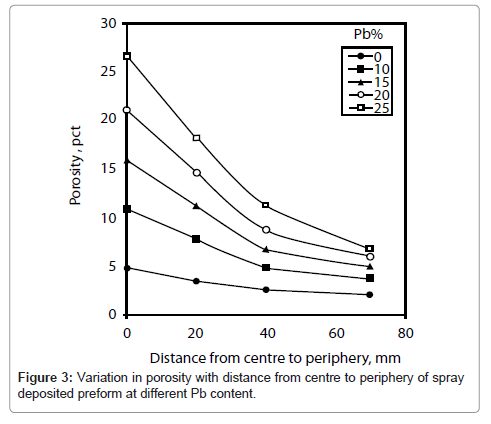 Figure 3: Variation in porosity with distance from centre to periphery of spray deposited preform at different Pb content. 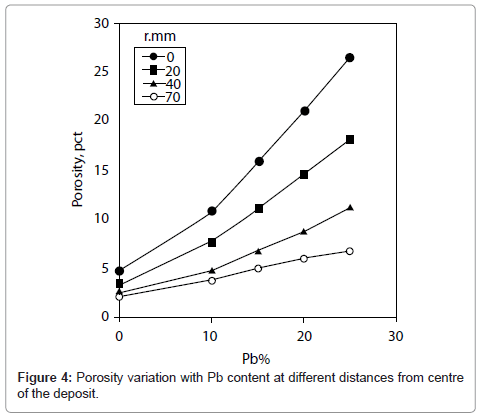 Figure 4: Porosity variation with Pb content at different distances from centre of the deposit.

To observe porosity and its distribution with the distance from centre to periphery of the deposit (to see gas velocity effect) and with lead content the recorded micrographs are shown in Figures 5 and 6, respectively. Figure 5 shows porosity for 20% Pb at distances 0, 20, 40 and 70 mm from centre to periphery of the deposit and Figure 6 shows porosity for 10, 15, 20 and 25% Pb at centre of the deposit. Micrographs shown in Figure 6 are taken by Image analyzer. These micrographs were taken at high magnification 4000X to visualize the porosity. The porosity can be due to the gas entrapment, insufficient melt to fill the porosity, and the lead shrinkage (causing porosity near lead particles). In micrographs (a) and (b) of Figure 5, large number of black spots can be seen uniformly distributed throughout the matrix. These spots show gas porosity. This type of porosity seems to be low at periphery i.e. 70 mm distance from centre of the deposit (Figure 5(d)). The size of pores varies from sub-micron to ~ 5μm. The porosity formation can take place due to the gas entrapment, insufficient melt to fill porosity, dissolved gas evolution and solidification shrinkage. All these factors are explained for some metals or alloy systems in the literature [18,19]. In present study some interesting features observed on porosity formation were the decrease in porosity from centre to periphery of the deposit (Figure 4) and the increase in porosity with the increase in lead content (Figure 5). The other feature was more porosity around the lead particles.

There can also be significant dissolution of hydrogen in the Al-Si- Pb alloy. This hydrogen comes from the humidity and it can dissolve mainly in aluminum because in lead its solubility is very low [18]. Therefore, the decrease in lead content should decrease the porosity but the reverse is true in the present study. Hence, the former reason of solidification shrinkage explained above dominates over this factor of gas dissolution.