In allergy immunotherapy (AIT) using peptides, although the choice of T-cell epitope in consideration of the HLA type is important, application to all HLA types is difficult. We recently devised a new method to address this problem in AIT for white birch pollinosis, using long-chain synthetic peptides by dividing the sequence of Bet v1a, the major allergen in white birch pollen, into three peptides that overlap by 10 amino acid residues. Theoretically, these peptides contain all possible T-cell epitopes for any HLA type. Further, these peptides show weak allergenicity and are considered less prone to cause anaphylaxis because the three-dimensional structures differ significantly from the native Bet v1a. The combination of these three peptides of Bet v1a appears to provide an effective, safe form of AIT for white birch pollinosis. This method may thus be applicable to other allergens.

Allergy immunotherapy (AIT) is a radical treatment for allergic rhinitis. This approach has a history of over 100 years and has been advancing with methods such as use of peptides, recombinant proteins and hypoallergens with the aim of improving safety in patients [1,2]. Traditional AIT is performed by subcutaneous injection (SCIT). As an alternative, sublingual immunotherapy (SLIT) has gained some traction because of an apparent reduction in adverse effects [3,4]. AIT has been reported to prevent sensitization for various allergens [4,5]. Nevertheless, AIT has not been popular in Japan for the following reasons: i) side effects include rare cases of fatal anaphylactic shock; ii) long-term treatment decreases adherence; and iii) unnecessary costs may be incurred as pre-treatment markers for identifying unresponsive patients are not yet available. The effectiveness and safety of AIT must therefore be improved to allow increased clinical application.

Allergic rhinitis is a typical type I allergic reaction. The mechanism begins when the allergen is deposited on the nasal epithelium and taken up by a submucosal antigen-presenting cell (APC). The allergen is then processed into peptides within the APC and after forming a complex with a major histocompatibility complex (MHC) class II molecule, is transported to the cell surface. In the presence of costimulatory signals, T cells recognize the MHC-peptide complex and a sequence of allergic reactions is initiated. Peptides recognized by T cells are known as T-cell epitopes. Due to the polymorphic nature of MHC molecules, every patient has different T-cell epitopes (Figure 1). Stimulated T cells produce various cytokines, in turn inducing B cells to differentiate into plasma cells producing immunoglobulin (Ig)E antibodies. These IgE antibodies bind to mast cells via Fc receptors found on the mast cell surface. This entire process is known as sensitization. When reintroduced, the allergen binds with IgE antibodies on mast cells and the cross-linking with the antibodies serves as a stimulus for secreting chemical mediators such as histamine from mast cells, triggering an isolated allergic reaction. Figure 1: Mechanism for antigen presentation of T-cell epitopes. The allergic reaction begins when the allergen is taken up by submucosal APCs. The allergen is processed into peptides within the APC and after forming a complex with a MHC class II molecule, is transported to the cell surface. In the presence of costimulatory signals, T cells recognize the MHC-peptide complex. Peptides recognized by T cells are known as T-cell epitopes. MHC molecules are extremely polymorphic and exhibit varying binding specificities for peptides by MHC type. Each MHC type thus has different T-cell epitopes for any given antigen.

Since administration of allergens is involved, AIT is considered to induce the above allergy reactions. However, high doses of allergen administered in AIT can result in a shift in the Th1/Th2 balance immune to a Th1 predominance, accompanied by induction of T-regs and increased concentrations of the regulatory cytokines interleukin (IL)-10 and IL-27, although the underlying mechanisms remain unclear [6]. The specific IgG4 and IgA that can act to neutralize reactivity to the allergen are thus induced and the allergy is suppressed. Activating T cells therefore seems central to AIT.

IT of birch pollen allergy

Birch pollen allergy is one of the most prevalent hay fevers in Northern Europe and North America, as well as in Hokkaido and parts of Honshu in Japan. AIT is used primarily in Northern Europe [7,8], but its use in Japan has not yet been approved and only symptomatic treatment is available. In recent years, oral allergy syndrome (OAS), a condition related to birch pollinosis, has become increasingly problematic, as anaphylactic shock is known to occur on rare occasions [9]. While measures to address OAS are much needed, avoidance of trigger foods is the only measure that has been put in place in Japan at present. The onset of OAS is thought to be caused by the cross-reactivity of specific IgE to epitopes in birch pollen and trmast cells and the cross-linking withigger foods when the level of birch pollen-specific IgE increases with the progression of birch pollinosis. Preventing the onset of OAS may be possible if AIT is performed in the early stages of birch pollinosis [10].

The IgE antibody binds to the epitope (known as the B-cell epitope) that is mainly present on the surface of the allergen. Since B-cell epitopes are dependent on the tertiary structure of allergen proteins, changing the tertiary structure through allergen modification, such as in peptide allergens, diminishes the binding strength of IgE to the allergen and may weaken the allergic reaction [11]. T-cell epitopes, however, were not impaired in peptide allergens [12,13]. Reduction of the side effects from AIT using peptides may permit the use of high concentrations of antigens and shorten the treatment period.

Conventional peptide immunotherapy has used peptides of about 15 amino acid residues, selected from several peptides of the allergen by determining T-cell epitopes. This method requires peptide selection for each patient due to the differences in MHCs, and is thus expensive. As one countermeasure, a peptide panel of major T-cell epitopes for each MHC has been reported [14].

On the other hand, longer peptides are able to reduce the number of total peptides and facilitate screening, although the synthesis of these longer peptides is more difficult. Short peptides with a T-cell epitope can bind with MHC molecules not only on professional APCs such as dendritic cells and B cells, but also on all cell surfaces that do not possess co-stimulatory molecules. Reports have indicated the possibility that T cells reacting with B cells are not activated, resulting in a state of anergy [15]. However, as long as T-cell epitope peptides cannot bind with MHC molecules on the B-cell surface, T-cell anergy is unlikely to occur. Most T-cell epitopes are taken up by dendritic cells and T cells are efficiently activated (Figure 2). As a risk of using long peptides, the peptide may become a B-cell epitope, and a previous study reported side effects associated with a 27-residue peptide [16].

Long peptides in AIT carry a risk of inducing anaphylaxis as an allergen [16]. Therefore, to prevent the occurrence of side effects in peptide immunotherapy, testing the binding between patient IgE and the peptides to be administered is important. For this check, the application of ImmunoCAPTM system, a method for quantitative determination of allergen-specific IgE, is considered. Addition of peptides to this system is able to check patient’s IgE binding to the peptide as inhibition of their IgE binding to the antigen of ImmunoCAP, but this process is not simple. Alternatively, use of a BAT can be considered. The BAT is an allergy test to identify the causal allergen by assessing basophil activation in a flow cytometer using the CD203c or CD63 markers. BAT has been used as a diagnostic tool for food and pollen allergies and is highly useful due to its flexibility in terms of test allergens [17,18]. The BAT is thus suitable for pretesting peptides for AIT. Figure 2: Differences in dendritic cells and B cells between longand short-peptide immunotherapy. Short peptides can bind directly to the MHC on various cells. DCs have co-stimulatory molecules, but unstimulated B cells do not. T cells reacting to the DC with peptide are activated, but do not activate in response to B cells with peptide, resulting in a state of anergy. Long peptides cannot bind to the MHC directly. DCs phagocytose the long peptides, which are then digested in a lysosome, and the resulting fragments bind to the MHC. However, on B cells, intake of an antigen requires recognition by the B-cell receptor. Peptides that are not recognized cannot be taken up by B cells for presentation to the MHC. T-cell anergy thus will not occur. AIT using long peptides thus activates T cells more efficiently. 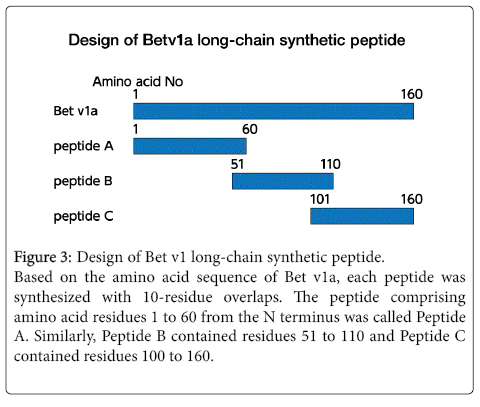 Long peptides of about 60 amino acid residues can be now synthesized, although synthesis of peptides containing multiple disulfide bonds is not easy.

Using long peptides for AIT is cheaper and allows easier purification than using recombinant protein. In our previous report [19], the full-length Bet v1a was divided into three parts and overlapping synthetic peptides were created (Figure 3). 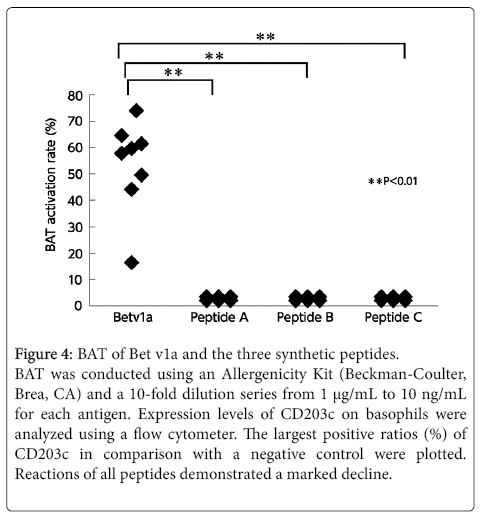 Figure 4: BAT of Bet v1a and the three synthetic peptides.
BAT was conducted using an Allergenicity Kit (Beckman-Coulter, Brea, CA) and a 10-fold dilution series from 1 µg/mL to 10 ng/mL for each antigen. Expression levels of CD203c on basophils were analyzed using a flow cytometer. The largest positive ratios (%) of CD203c in comparison with a negative control were plotted. Reactions of all peptides demonstrated a marked decline.

Since the present peptides are not short and contain the entire amino acid sequence of Bet v1a, immunotherapy using them is not limited to one specific MHC. These peptides seem likely to be applicable to all MHC and would thus be effective even in ethnically diverse populations. Furthermore, the antigen concentration could be increased within a short period of time and this therapy may shorten the treatment period, as B-cell epitopes are absent. In addition, BAT is likely to prove helpful in investigating whether serious allergic reactions can occur due to the inclusion of B-cell epitopes prior to peptide administration. 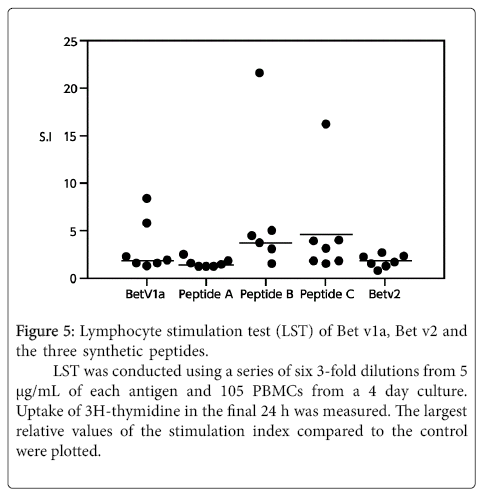 Figure 5:Lymphocyte stimulation test (LST) of Bet v1a, Bet v2 and the three synthetic peptides.
LST was conducted using a series of six 3-fold dilutions from 5 µg/mL of each antigen and 105 PBMCs from a 4 day culture. Uptake of 3H-thymidine in the final 24 h was measured. The largest relative values of the stimulation index compared to the control were plotted

We have provided an outline of AIT using three long-chain synthetic peptides of 50-60 amino acid residues for white birch pollinosis. This AIT may offer advantages in term of effects, adaptations to different MHC, and reduced side effects in comparison to short peptides or whole proteins, although clinical study is needed for the confirmation. This method may also be applicable to other allergens.

Copyright: © 2016 Uehara M, et al. This is an open-access article distributed under the terms of the Creative Commons Attribution License, which permits unrestricted use, distribution, and reproduction in any medium, provided the original author and source are credited.