Copyright: © 2016 Trabelsi F. This is an open-access article distributed under the terms of the Creative Commons Attribution License, which permits unrestricted use, distribution, and reproduction in any medium, provided the original author and source are credited.

The posterior urethral valves (PUV) realized a low urinary obstruction associated with the persistence of a mucosal fold under the veru montanum. It is the first cause of subvesical obstacle of the child. It is also the most serious obstructive uropathy [1], with a significant risk of renal failure (25 to 40% of cases), sometimes requiring kidney transplantation (1% of children waiting for kidney transplants had PUV). This malformation, which appears very early in the development of the urinary tract, is often isolated. Its cause remains unknown. Antenatal diagnosis is possible in some cases and improves decision in postnatal load.

We have collected in this review 26 patients followed at the pediatric surgery department of Habib Thameur hospital for posterior urethral valves over a period of 12 years from January 2002 to March 2014.

The elements studied are: age at diagnosis, circumstances of discovery, explorations realized, therapeutic management and evolution.

Our series included 26 boys. The mean age was 20 months and 7 days with extremes ranging from one day to eight years. It was 4 newborns, 18 infants and 4 children. Urinary tract infection was the most common reason for admission found in 11 cases. Dysuria was found in 6 cases, abdominal distention in 1 case when the diagnosis was made at the antenatal period in 9 cases. The prenatal ultrasound had showed bilateral uretero pelvic dilatation in 7 cases, unilateral dilatation in 2 cases, megacystis in 2 cases and hydramnios in 1 case.

Voiding cystourethrography (VCUG) was performed in 19 patients and found dilated and elongated posterior urethral (key-hole sign) in 15 cases (Figure 1). Bladder diverticulum was found in 10 cases (Figure 2). Vesicoureteral reflux was present in 9 cases. It was unilateral in 5 cases (Figure 3) and bilateral in 4 cases (Figure 4). 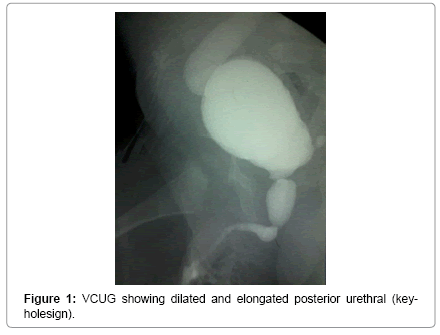 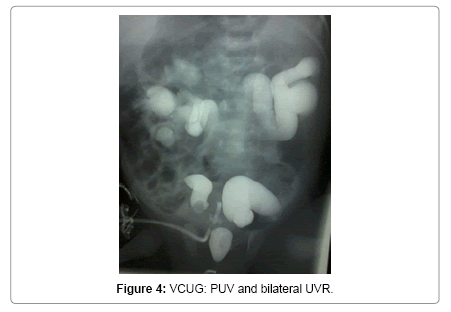 Preoperative renal function assessment was done by DMSA scan in 8 boys and by MAG 3 scan in 4 cases; it was altered in 9 cases.

Suprapubic catheter insertion was established in 1 case and the section of valves was made after a month. The evolution was favorable in 11 cases. Eight patients had kept a bladder dysfunction and 7 children had evolved to renal failure. At last check, 7 patients had urinary leakage with urinary urgency. Biologically, the value of creatinine was normal in 19 patients, while 7 children had renal failure which 3 at the end stage.

The posterior urethral valves (PUV) are characterized by a membranous obstruction responsible for an expansion of underlying excess urethra and oppose the non-obstructive membranous folds [2].

According to the Young classification, there are three types of PUV, with Type I being by far the most commonly encountered. Type I (95%) represents sail-like folds from the verumontanum distally along the urethra. Type II valves likely have only historical significance and are not considered to be a clinical entity, but rather hypertrophied urethral folds. Type III (5%) valves represent a cannulated septum thought by some to represent an incomplete dissolution of the urogenital membrane [2].

Antenatal diagnosis is possible at 16-18 weeks of gestation. Ultrasound precise the nature of the obstacle, the impact on the top unit, the existence of extra-urinary effusions, the volume of amniotic fluid and any associated abnormalities [3].

Ultrasound can give an idea of fetal renal function by estimating the amount of amniotic fluid. An anamnios evokes the presence of a complete obstacle [4].

If the diagnosis is made prenatally, childbirth can be organized in a maternity Level 3, allowing the child to be taken care earlier [5].

At birth, a renal ultrasound and a renal balance must be made at the first day of life to confirm the antenatal findings.

In the absence of prenatal diagnosis, PUV can be manifested by urinary tract infections, impaired growth or crying and agitation during urination suggesting dysuria. Sometimes, the diagnosis is made in the exploration of urinary incontinence, voiding difficulties or kidney failure [6,7].

If PUV are suspected, we complete with ultrasound. It shows unilateral or bilateral hydronephrosis in 80-90% of cases and a distended bladder, with thick walls in 85% of cases. The sensitivity of this examination for the diagnosis of PUV is around 95% and is much higher in older children. Ultrasound can also study the impact on the kidneys [6].

The voiding cystourethrogram (VCUG) remains the only radiographic study that definitively establishes the diagnosis of PUV. The valve appears as a sharply defined perpendicular or oblique lucency in the distal prostatic urethra.

The posterior urethra is dilated and elongated and has the appearance of a shield. The bladder is trabeculated with clear delineation of the bladder neck, which appears as a thick muscular collar because of hypertrophy [8]. Vesicoureteral reflux (VUR) is present in 50%.

Nuclear cystography is not indicated in the diagnosis of posterior urethral valves but it can evaluate the renal function and depict the presence of vesicoureteral reflux [9].

The urodynamic bladder testing is usually indicated in the supervising of patients treated for PUV to check the maintenance of good bladder sphincter synergy.

The initial care at birth is to provide bladder drainage by Folley catheter, or by an aspiration probe of suitable gauge, or by suprapubic catheter insertion. The management includes the correction of electrolyte disturbances, the fight against urinary infection and the endoscopic section of valves or the realization of a vesicostomy once the diagnosis is confirmed. The direct drainage of upper tract urine is indicated only when bladder drainage is ineffective, that is to say the persistence of severe sepsis and/or a lack or insufficiency of improving renal function in children (less than 50% in the first 24 to 48 hours) [10,11].

Most authors also agree on endoscopic treatment of the valve [12].

The introduction of resectoscope must be particularly soft in passing the meatus and the navicular fossa. The valves can be incised at the 12-, 5-, and 7-O’clock positions with either a cold knife or electrocautery without trying to resect completely the valves because of the risk to hurt the urethral wall [13].

In some cases, the endoscopic section valves in the neonatal age is difficult (weight 3 kg, technical problem). Vesicostomy can be created which has two roles: it allows bypassing urethra and it modifies the architecture of the bladder muscle, particularly the trine, to remove the obstacle at the ureterovesical junction [14].

For ureterovesical reflux, it disappears in 25-50% of cases after lifting of urethral obstruction. Residual reflux is tolerated if the bladder empties well and works in satisfactory urodynamic conditions. The ureteral reimplantation reduces the incidence of urinary tract infections, but does not improve long-term evolution of renal function. The endoscopic treatment is an indication of choice because of its simplicity [17]. If the refluxing kidney is nonfunctional, it could improve his function after the section of valves and the restoration of low bladder pressure [8]. So, nephrectomy for theses kidneys is not indicated.

The objective of the management of patients with PUV is to avoid as much as possible, the evolution to renal failure.

For this reason, prognostic factors must be identified such as:

• Renal function before and after treatment

• The presence of vesicoureteral reflux,

The posterior urethral valve is a complex disease, with significant repercussions throughout life. Thanks to the antenatal ultrasound, we can detect fetus with PUV in 80% of cases. An early post natal care and improved surgical strategies have helped to minimize mechanical and infectious complications and especially the risk of progression to kidney failure.