Anecdotal reports of Northern bobwhite quail (Colinus virginianus) exhibiting strange behavior have raised suspicions of parasite induced host mortality (PIHM) in the Rolling Plains of West Texas. In 2017, we received 11 bobwhite carcasses associated with such reports and found parasites in all of these specimens. While further research is needed to evaluate the impact of parasites on bobwhite, these reports provide a valuable supplement to on-going investigations of PIHM in bobwhite from the Rolling Plains of West Texas.

The Northern bobwhite quail (Colinus virginianus), hereafter bobwhite, is a popular game bird found throughout much of the United States. Bobwhite are particularly well known in Texas, where hunters dedicate substantial resources to the pursuit of these birds, thereby providing valuable revenue for local communities [1]. Unfortunately, over the past several decades, bobwhite have been declining throughout their range, including Texas [2]. This decline, coupled with the economic significance of bobwhite, has led to concerted efforts aimed at investigating the factors contributing to dwindling bobwhite numbers. While habitat loss, changing agricultural practices, and dynamic weather patterns are known to affect bobwhite abundance [3-5], continued declines in areas with relatively stable conditions [6] suggest that other factors may also be at play. Despite the urging from Robel [7], Brennan [8], and Peterson [9] to investigate other factors such as disease and parasites, these factors remained undervalued and were not considered a priority in the investigation of the bobwhite decline.

However, when there was a rapid and mysterious decline in quail abundance in the Rolling Plains of Texas and Oklahoma in 2010, an area long considered to be a stronghold for quail, a collaborative effort between several universities was launched in order to investigate the effects that contaminants, diseases and parasites have on quail. This initiative, known as Operation Idiopathic Decline (OID), revealed significant parasitic infection in bobwhite from the Rolling Plains [10,11]. The most common parasites found in studies associated with OID were the caecal worm (Aulonocephalus pennula) and eyeworm (Oxyspirura petrowi), which are heteroxenous nematodes that infect the caeca and eyes, respectively, of their hosts [12,13]. Both of these helminths were found to be highly prevalent, with Bruno [10] documenting infection rates of caecal worms and eyeworms in bobwhite from the Rolling Plains of Texas as high as 91% and 66% respectively. Additional studies have documented that in some areas infection rates can be 100% for both parasites [14,15]. Such a high incidence of these parasites caused concerns, which were later elevated following evidence of pathological consequences of eyeworm infection [16,17].

The discovery of inflammation and damage to the cornea and eye tissues of infected bobwhite led to speculation of visual impairment, and Dunham et al. [17] further suspected that eyeworm infection could reduce the survivability of birds. Considering the high infection rates observed in the Rolling Plains, this is a concerning hypothesis. These findings also complement prior observations of peculiar behavior in bobwhite from the region. For example, some quail were seen running in circles when pursued by hunting dogs, leading observers to believe that they may have suffered impaired vision [18]. Additionally, anecdotal reports from ranchers and land owners in the Rolling Plains detailed instances of bobwhite flying into barns and other anthropogenic structures, with eyeworms found emerging from the eyes of these quail upon inspection (Personal communication, Kendall). While interesting, care must be taken when considering such reports in terms of evaluating the impact of parasites, as they are not a substitute for intensive study. However, such accounts can provide a valuable supplement to systematic research, particularly in cases where the specimen(s) associated with the account are available for examination.

In this communication, we will discuss several reports of bobwhite mortalities that were associated with specimens donated to the Wildlife Toxicology Laboratory (WTL) at Texas Tech University. Since 2013, the WTL has been engaged in research following the prevalence and effects of parasites in bobwhite from the Rolling Plains of West Texas [11]. Occasionally, bobwhites are donated to the WTL, and between 5 February and 25 November 2017, we received an unprecedented 11 carcasses from Fisher, Kent, and Stonewall counties in Texas (Figure 1). Of these samples, 3 were observed flying into anthropogenic structures, 3 collected as roadkill, 2 reportedly killed by Coopers hawks (Accipiter cooperii), 2 hand captured, and 1 found with an undetermined cause of death. The carcasses were necropsied and examined for the presence of eyeworms and caecal worms as described by Dunham et al. [14] under Texas Parks and Wildlife Research Permit No. SPR-0715-095. 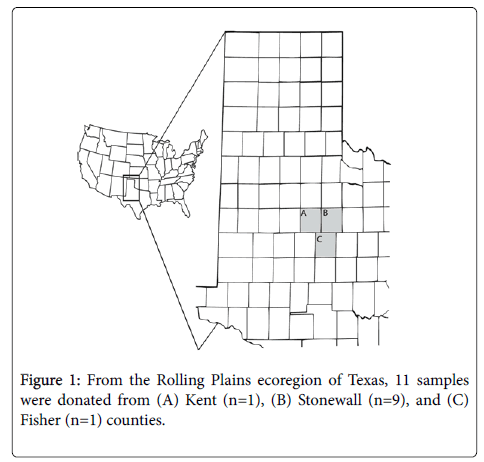 Bobwhite recovered post collision with anthropogenic structures possessed bruising on the breast tissue suggesting that impact occurred at a high speed. One sample recovered from Stonewall County was also reported to have eyeworms emerging from underneath the nictitating membrane at the time of collection. Eyeworms were found in all 3 of these samples, and the report of eyeworms near the eye surface, in conjunction with high impact speed, may be indicative of visual disruption. Additionally, all of the road kill samples we received were also infected with eyeworms, which may have contributed to collisions as these were collected from private low speed and low volume roads. These observations parallel anecdotal reports and support Dunham et al. [17] hypothesis of potentially disrupted vision resulting from eyeworm infection. Consequently, additional studies are warranted to determine whether eyeworms impair the vision of infected individuals and if damage is relative to infection levels or is influenced by the position of eyeworms within the eye. Although such research would be challenging to implement, it would provide crucial insight into the dynamics of this parasite and its potential to compound with other stressors that affect bobwhite survival, such as predators, scarcity of food, and harsh climactic variables [6].

Parasites may exacerbate the effect of these stimuli, particularly in areas where infection is highly prevalent, such as the Rolling Plains. The circumstances surrounding the following quail samples are potential examples of how parasites may compound other variables. For instance, 2 of our specimens that were reportedly killed by Cooper’s hawks, a known predator of bobwhite [19], were infected with eyeworms at what Dunham et al. [14] considered mild and strong infections. Unfortunately, one of the caeca was not recovered, but the other had a strong caecal worm infection. Furthermore, it was speculated that the quail with an undetermined cause of death was also a hawk kill as it was found with neck damage and blood pooled around the head. This quail’s ability to escape predators may have been impaired as well as it had an extreme eyeworm infection and strong caecal worm infection. While it is unknown whether these parasites contributed to these examples of predation, it is possible that parasites impair the quail’s ability to evade such a competent predator.

The remaining 2 samples were given to the WTL by ranchers who were able to approach and capture the quail by hand, a truly unusual phenomenon. One of these birds, collected from Stonewall County on 25 June 2017, was severely emaciated (Figure 2) and harbored a strong eyeworm and extreme caecal worm infection. The caecal worm numbers in the second bird were also high and approached an extreme level. Rollins [20], Dunham et al. [21], and Henry et al. [22] postulated that high caecal worm numbers could impede caecal function and lead to malnutrition. Furthermore, Lehmann [23,24] noted that increased caecal worm burdens were associated with decreased vitamin A levels. As such, it is possible that parasites contributed to the condition of the hand captured birds and continued research into the consequences of these parasites is important in understanding their effect on bobwhite survival.

The omnipresence of eyeworms and caecal worms in bobwhite donated to the WTL in 2017, coincided with increased parasite burdens that may have resulted in a die-off of bobwhite in Mitchell County, Texas [15], and potentially the Rolling Plains. These observations, as well as the reports associated with donated specimens, augment anecdotal accounts from throughout the Rolling Plains, highlighting the potential of these parasites to impact bobwhite abundance in the region. Although the effects of parasites on bobwhite of the Rolling Plains are still under investigation, another helminth, (Trichostrongylus tenuis), has been found to drive the population cycles of the red grouse (Lagopus lagopus scotica) by reducing fecundity and increasing vulnerability to predators [25-27]. These findings for the red grouse required over 20 years of extensive research because it is notoriously difficult to observe and identify parasite induced host mortality (PIHM) in the wild [28].

Considering the ability of T. tenuis to affect red grouse populations, it is possible that caecal worms and eyeworms may affect bobwhite populations in the Rolling Plains in a similar manner. However, determining the significance and extent to which this occurs may also take considerable time and effort, particularly since the impact of multiple parasites is not well understood. Furthermore, instances of hosts exhibiting terminal symptoms of parasitic infection are rarely observed in the wild [28], and bobwhite carcasses, which may hold evidence of PIHM, are seldom found even in areas where quail are common [29] and are typically scavenged within 24 h [30]. For this reason, continued donations of specimens are essential to the investigation of PIHM of bobwhite in the Rolling Plains. While the findings presented in this communication represent a small sample and are not a substitute for systematic research, they do provide a valuable complement to research investigating PIHM in bobwhite from the Rolling Plains. Therefore, a comprehensive approach involving systematic lab and field work, in conjunction with personal accounts and observations, may yield an improved understanding of the effects multiple parasites have on bobwhite populations.

We thank Park Cities Quail and the Rolling Plains Quail Research Foundation for the funding and support necessary to conduct this research. We also thank those that donate bobwhite to the WTL. Without their constant vigilance and dedication, this research would not be possible.

Copyright: ©2017 Brym MZ, et al. This is an open-access article distributed under the terms of the Creative Commons Attribution License, which permits unrestricted use, distribution, and reproduction in any medium, provided the original author and source are credited.