Practice of Self Medication for Dental Ailments among Patients Attending Dental OPDs in Karachi, Pakistan

Practice of Self Medication for Dental Ailments among Patients Attending Dental OPDs in Karachi, Pakistan

To determine the prevalence of self-medication for dental problems and its associated factors among patients visiting dental outpatient departments (OPDs) of Karachi Medical and Dental College (KMDC) and Liaquat College of Medicine and Dentistry (LCMD). This includes the commonly used drugs, their duration, dosage and side effects, also to determine the reasons for self-medication and to educate them about its consequences.
Self-medication may be defined as the inappropriate use of drugs without doctor’s prescription for previous or self-diagnosed diseases. It is a common practice among dental patients all over the world.
A cross sectional survey was carried out among patients attending the dental outpatient departments of LCMD and KMDC, Karachi, Pakistan from June 2017 to October 2017. The non-probability convenient sampling technique was used and data was stored and analysed using IBM-SPPS version 23.0. The survey was carried out among 160 patients attending dental OPDs, out of which 69.9% patients acquiesced that they are involved in self-medication practices.
Commonly consumed drugs for self-medication were pain killers (analgesics) in females 78% and in males 63.3% and antibiotics 6.7% in males and 5.0% in females. Survey showed that 51.4% admitted that they have had adverse effects while taking self-medications. Comparison between pre and post counselling regarding the perception of self- medication was also done. Before counselling (20.9%) patients considered it to be a good practice while (33.3%) disagreed. Although after counselling, there was an increase of up to 47% in patients considering selfmedication as an unacceptable form of treatment.
There is a high prevalence of self-medication practice for dental problems among patients attending dental OPDS of KMDC and LCMD despite having awareness of its adverse effects. With higher frequencies in females but practice is common in both upper and lower social classes. Analgesics, usually Panadol are most commonly consumed.

This study was conducted among dental patients of Karachi, Pakistan to determine and spread awareness about the prevalence of self-medication for dental problems and its associated factors including the commonly used drugs, duration, dosage and side effects, reasons for such practices, the knowledge, awareness and attitude towards selfmedication practice among dental patients of Karachi, Pakistan.

Self-medication is a common practice for the treatment of dental problems among individuals almost everywhere in the world. Selfmedication may be defined as the inappropriate use of drugs and home remedies without doctor’s prescription for the treatment of acute, chronic or recurrent self-diagnosed diseases or symptoms of diseases [1,2].

WHO has encouraged the responsible practice of self-medication in rural and remote areas for effective and quick relief of some common diseases where health care personnel or services are understaffed, deficient or inaccessible [3]. This, responsible self-medication practice may help to reduce the cost of treatment, travelling time as well as doctor’s consultation time [4].

The medications that are usually used for self-medication are termed as “non-prescription” or “over the counter” (OTC) drugs. These drugs must be administered on the basis of authentic medical information [5].

While reviewing different literatures it was found that the prevalence of self-medication is quite high despite the awareness of the adverse effects [2]. A study conducted in non-medical universities of Karachi, Pakistan showed self-medication practice in 50.1% students and 47% reported self-medication with antibiotics [2].

Other reasons are distrust in health care personnel, ignorance, long waiting appointments, retreatment of similar diseases and avoiding loss of work-time [1,3,8,10]. In dental practice, apart from anxiety and phobia for dentists and their practices, toothache is the main cause of avoiding dental consultation or treatment [1].

The sources of self-medication include suggestions from advertisement in newspapers, popular magazines, television, and radio or through social media. Advices from families, friends, neighbours, pharmacists or from previously prescribed medications [4]. The rate of self-medication can be decreased by public education and by enforcing and implementing laws about prescribed medications. Especially the antibiotics should be sold on prescription bases [2].

A close ended questionnaire consisting of 33 questions, based on dental problems and self-medication was given to the patients attending dental outpatient departments of LCMD and KMDC.

It was estimated using open Epi sample size calculator version 3.01, after inserting 66% prevalence of self-medication [11] with 7.5% margin error and 95% confidence interval we got n=154 as the sample size for the study, however we have taken n=160.

The survey was conducted using the non-probability convenient sampling technique. As the participant filled the questionnaire he/she was counselled regarding self-medication and later followed up by a post counselling questionnaire.

A cross sectional survey was carried out among patients attending the dental OPD of LCMD and KMDC, Karachi, Pakistan from June 2017 to October 2017. A sample of 160 patients was taken.

Table 1: Association of practices of self-medication with gender.

Figure 1 shows that the most commonly consumed drugs for selfmedication were pain killers (analgesics) in females 78% and in males 63.3% and antibiotics 6.7% in males and 5.0% in females. In analgesics Panadol with 37% is the most favoured drug. Other commonly consumed analgesic by 30% is Ansaid/ Brufen (Figure 2). Figure 2 shows that in antibiotics Augmentin/Amoxil with 15% is the most elected drug for dental treatment by one’s self. 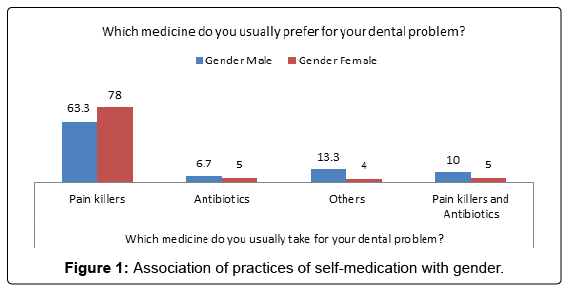 Figure 1: Association of practices of self-medication with gender. 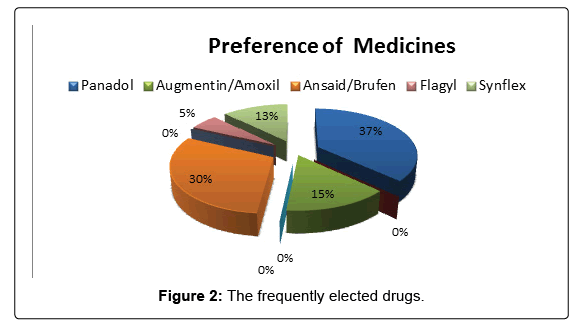 Reasons for practicing the self-medication include convenience 57%, cost saving 14.3% and lack of trust in prescribing doctor 6.1% as illustrated in Table 2.

Table 2: Practice and rationale of self-medication among patients for dental problems.

Table 3: Attitude and awareness of self-medication for dental problems.

Figure 3 demonstrates that patients usually stopped taking antibiotics once symptoms disappeared 38.5% or after completion of course 29.7% or few days after the recovery of symptoms 17.6%.

Selection criteria of medicines for self-medication practice was based on either one’s own experience 31.3% or previous doctor’s prescription 25.8%, opinion of family members 22.1%, or recommendation by community pharmacist 8.0% as shown in Figure 4. 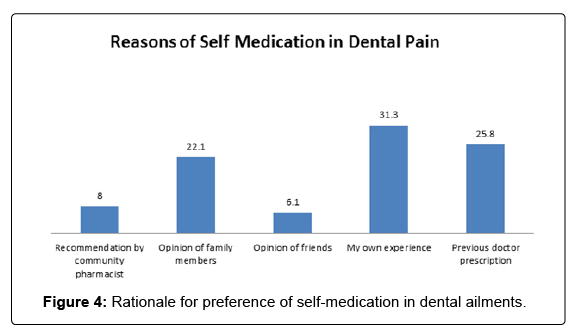 Figure 4: Rationale for preference of self-medication in dental ailments.

Income status was not significantly associated with self-medication. Patients with monthly income of Rs. 10,000-30,000 claimed that cost saving (38.9%), and convenience (25.0%) as a reason for selfmedication, while patients with monthly income of more than Rs. 50,000 claimed lack of trust in prescribing doctor (50.0%) as a reason of self-medication (Table 4).

Figure 5: Comparison of participant’s perception of self-medication before and after counselling.

Our study assessed various factors that could be associated with the use of self-medication among the dental patients in Karachi, Pakistan.

The reason for higher percentage in females is due to either lower threshold towards pain or to the fact that females have greater fear towards dental treatment as compared to males. This finding is consistent with other studies which show greater prevalence of selfmedication among females [12]. However, opposite finding was found in a study conducted in Nigeria in which there was male predominance over female gender.

The data collected from our survey showed that analgesics are more commonly used for self-medication than antibiotics in both genders. The same result was found in a study conducted in Cameroon [13]. This is due to the fact that toothache is found to be the most common dental problem. The consumption of analgesics in males is less (63.3%) than females (78.0%). The use of antibiotics is less than that of analgesics and the male to female ratio is found to be more in males (6.7%) as compared to females (5.0).

Among the list of drugs commonly used in self-medication practice, Panadol is the most common non-doctor prescribed drug (37%), followed by Ansaid /Brufen(30%) while Synflex is found to have a low figure of only 13% in our study population.

In antibiotics, there is a high percentage of Augmentin /Amoxil (15%) while only 5% use of Flagyl among individuals practicing selfmedication.

After asking further questions about the course of antibiotics, the respondents practicing self-medication for dental problems showed that they usually stop taking antibiotics mainly after the symptoms disappeared (38.5%), some patients (29.7%) completed their antibiotic course while few patients (17.6%) stopped taking antibiotics a few days after recovery.

Our study also comprises of a Post-Counselling section. After counselling the patients, educating them and making them aware of the dangers of self-medication, the difference in the responses among the patients of our study survey was found to be quite high.

The results of our survey indicate that the selection criteria of non-doctors prescribed medication is basically based on one’s own experience of medications taken for previous dental problems in 31.3% population while 25.8% people select medicines from the previous doctor’s prescription medication.

Dental services need to be made more accessible and affordable to the general population. Public education programs need to be intensified and government should take steps for enforcing and implementing laws about prescribed medication which can decrease the rate of self-medication. Ideally antibiotics need to be regulated on a “sold on prescription only” basis.

The authors would like to acknowledge the assistance provided by Dr Aisha Faraz, Dr Sumera Saeed, Dr Maha Khan, Dr Fabiha Siddiqui, Dr Nabeel Ahmed and faculty members of LCMD and KMDC in conducting this research.

Copyright: © 2018 Zareef DU, et al. This is an open-access article distributed under the terms of the Creative Commons Attribution License, which permits unrestricted use, distribution, and reproduction in any medium, provided the original author and source are credited.