In recent time, Niger Delta Basin has progressively become one of the prominent and mature oil and gas provinces in Africa. A massive exploration for hydrocarbon and productions in this basin has recorded huge successes. The production of the hydrocarbon in the wellbore are sometimes associated with production related changes that mostly result from water/steam injection, thermal heating, fracking, and natural gas re-injections. The idea is to reduce the viscosity of the hydrocarbons or increase the reservoir pressure drive so that hydrocarbons can flow easily into the wells for easy production. However, with constant exploitation of hydrocarbon in this manner, the wellbore may become saturated with injected floods, thus reducing the optimal productivity of the field. Our focus in this study is to image the effect of fluid flow saturations and predict the performance level of the reservoirs using well log attributes. The knowledge of wellbore performance is vital in well management and development strategy for overall improvement on the productive life of the field. The use of well log attributes offers good knowledge of physical properties of reservoir especially at the point of well locations. These attributes are generated from the well-logs and cross-plotted to interpret fluids and lithologies in the reservoirs. Goodway et al., highlighted relevance of well log attributes such as Lambda-Rho, Mu-Rho, Poison’s impedance, Pimpedance, S-impedance in reservoir analysis. They stated that Lamdo-Rho attributes give information about the reservoir pore fluids and distinguishes between gas and brine charged sands while Mu-rho gives a quantitative measure of the variations in rock matrics.

Depending on the sand quality, moderately consolidated clean saturated reservoir sand formations exhibit relatively high Mu-rho due to their high resistance to shearing while unconsolidated clean saturated reservoir formations exhibit low Mu-rho values. Quakenbush and Tuttle [1] introduced the concept of the Poison’s impedance attributes, which they described as the difference between Pimpedance and scaled S- impedance arising from the difference of the two squares of Lambda-rho (λρ) attributes. They conclude that Poison’s impedance is a good discriminator of the fluids with higher sensitivity more pronounced in gas than oil effects. Different researchers have used the different approaches similar to that of Goodway et al., method to derive the relationship between lithology and fluids in the reservoir using λ-μ-ρ technique [2-8].

In this study, the well log derived attributes were integrated to monitor the production process and performance stages of the three defined reservoirs. This is hoped to rekindle proactive measures in well management and development.

Fabi Field is located at about 40 km south-east of Port Harcourt, Rivers state in the Niger Delta Basin of Nigeria (Figure 1). The Fabi Field is situated in Onshore depo-belt of Niger Delta. The Niger Delta is one of the most prominent basins in West Africa, situated on the continental margin of the Gulf of Guinea in equatorial West Africa, at the southern end of Nigeria, bordering the Atlantic Ocean between latitudes 3° and 6°; and longitude 5° and 8° [9]. The northern boundary is the Benin Flank, an east-northeast trending hinge line south of the West Africa basement massif. The north-eastern boundary is defined by the outcrops of the cretaceous on the Abakaliki high and south east by the Calabar flank, a hinge line bordering the adjacent Precambrian [10]. The offshore boundary of the Niger delta is defined by the Cameroun volcanic line to the east, the eastern boundary of the Dahomey basin. The sedimentary basin of the Niger Delta encompasses a very large region than the geographical extent of the modern delta as evidenced by the Niger- Benue drainage system [11]. It includes Cross river delta and extends eastwards into the continental margins of neighbouring Cameroon and Equatorial Guinea [12]. The first step in the method used in this study was to edit and condition the well logs using media filtering correction of E-log program. This removes or smoothen the anomalous spikes in the well logs initiated by high frequency noise or error in equipment. The second vital step was to generate the missing well logs needed for the study using appropriate transform equations. For instance, shear wave logs were not available, but they were generated using Castagna’s relations which apply linear transform to input P-wave log. Gardner’s relation was used to derive density logs.

With appropriate well logs obtained, elastic well log attributes were generated using E-log transform menu. Horizons were defined in the three reservoirs (HD5000, HD8000 and HD9000) that are undergoing productions. The appropriate pair of generated elastic attributes (Lambda (λ), Mu (μ) –Rho, density (ρ), P-impedance, S-impedance, Vp/Vs ratio etc.) was cross-plotted at each reservoir interval. The cluster populations of the cross-plots and the attribute cross sections were analyzed to ascertain the level of the reservoir lithology variations, water saturation and their overall performances.

The cross-plot of Lambda-Rho versus Mu-Rho in HD5000 reservoir discriminated fluids and lithology (Figure 2). The red circle is shale zones which are associated with very high Lambda-Rho values and very low Mu-Rho values; the black circle are brine- charged zones while the yellow circle are interpreted as gas-charged zones with a very low Lambda-Rho values (high Mu-Rho values). The color overlay of the Lambdah-Rho shows the percentage of lithologcal and fluid distribution within the reservoir (Figure 3). The blue color band which represents the brine saturation is about 75% while the gas saturation in yellow and green color bands has about 27% saturation. High percentage of brine saturation in the reservoir is an indication of production related effects. This is because as production increases in the reservoir, hydrocarbon saturation decreases while water saturation increases. 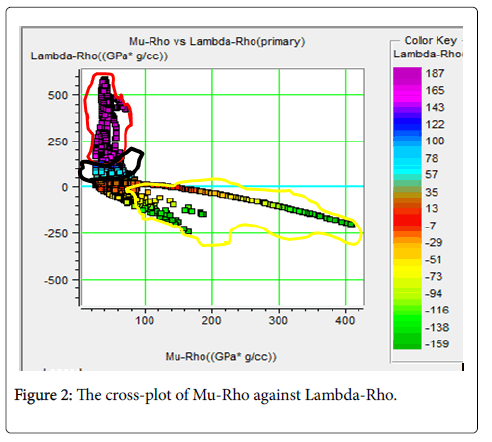 However, the Lambda-Rho and Mu-Rho cross-sections show that increase in Lamda-Rho results in a decrease in Mu-Rho values. Lambda-Rho is more robust in reflection curves than Mu-Rho thus making it a better fluid discriminator than Mu-Rho. Mu-Rho is insensitive to fluid saturant but they are considered as matrix indicator. Sand has a very high Mu-Rho response of about 400Gpa*g/cc (Figure 2). This is because the sand matrix especially quartz has very high rigidity. The cross plot of Lambda-Rho and high Mu-Rho suggests the presence of gas sand in HD5000 reservoir. Figure 4: (a) The cross-plot of velocity ratio versust P- impedance; (b) The attribute cross-section of P-impedance and velocity ratio. 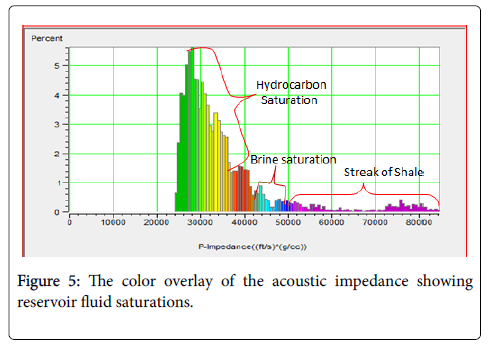 Figure 6: (a) The cross-plot of Mu-rho versus density; (b) Attribute cross section of density and Mu-rho. 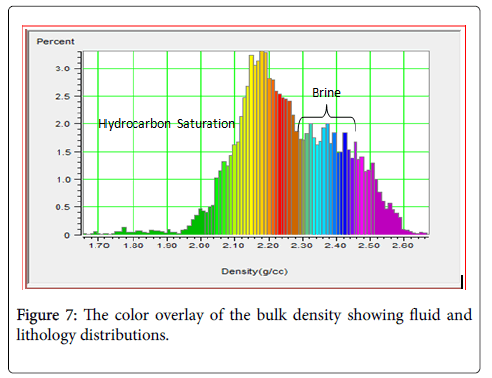 Figure 7:The color overlay of the bulk density showing fluid and lithology distributions.

Copyright: © 2017 Adewale AO. This is an open-access article distributed under the terms of the Creative Commons Attribution License, which permits unrestricted use, distribution, and reproduction in any medium, provided the original author and source are credited.