Copyright: © 2015 Marghalani TY, et al. This is an open-access article distributed under the terms of the Creative Commons Attribution License, which permits unrestricted use, distribution, and reproduction in any medium, provided the original author and source are credited.

Materials and methods: Fiber dowels (Fiber Kleer sizes 1.25, 1.375, and 1.5; Postec Plus sizes 0, 1, and 3) were used. Ten fiber dowels from each system and size were embedded in C&B temporary resin cylinders. The detector of a radiometer was placed on the apical end of each embedded dowel, and the probe tip of an LED curing light was placed on the coronal end. The light cure machine was activated for 40s. The cylinders were shortened in 1-mm increments and TLRE (in mill joules/centimeter squared) was measured at each increment. TLRE values were analyzed using hierarchical multiple linear regression (α = 0.001) with SPSS software.

Fiber dowel retention is required for the success of foundation restorations and overlying fixed prostheses [1]. Many factors affect dowel retention, including the depth of cure of the cement used. Lightor dual-cure resin cements are commonly used with fiber dowels [2-4]. Both cement types require light to initiate polymerization, resulting in varying degrees of conversion, or depth of cure, depending on light intensity and degradation along the length of the root canal system [5]. Reports have shown that some dual-cure cements do not reach adequate degrees of conversion in the absence of light [6-8]. The use of translucent dowels has been recommended to improve the degree of conversion in dark areas of the root canal that cannot be reached by curing light [5,9,10].

Several studies have examined the effects of light curing on the degree of resin cement conversion [10-14]. Few reports on light intensity at various locations on different fiber dowels have been published [11,15,16]. A few reports have described the effects of light transmission through dowels on resin cement, such as micro-hardness and degree of conversion, rather than reporting on light intensity or radiant exposure of the fiber dowel [12,13,17-21]. Only two studies have examined light transmission through fiber dowels by measuring light counts with a spectrophotometer or luminous intensity with a digital reader [11,16].

Two fiber dowel systems were used in this study: FiberKleer (FK, sizes 1.25, 1.375, and 1.5; Pentron Clinical, Orange, CA, USA) and Postec Plus (PT, sizes 0, 1, and 3; Ivoclar Vivadent Inc., Amherst, NY, USA). The FK and PT fiber dowel systems used in this study are glass fiber-reinforced composite systems. Both dowels are plane tapered, but different lengths and diameters were available for each system. The FK dowel contains a mixture of cured copolymers triethylene glycol dimethacrylate (TEGDMA), and 2, 2-bis [4 (2-hydroxy-3- methacryloxy-propyloxy)-phenyl] propane, also known as bisphenol A glycidyl methacrylate (BisGMA) and 1,6-Hexanediol dimethacrylate (HDDMA), barium borosilicate glasses, and glass fibers. The PT dowel’s resin matrix contains a core of urethane ethyl dimethacrylate (UDMA) and TEGDMA, and several additives, such as ytterbium trifluoride, a highly dispersed silicon dioxide. Ten fiber dowels from each system and size were embedded in a temporary resin cylinder made from Systemp. c & b II (Ivoclar vivadent, Schaan, Liechtenstein) to simulate the light passing through a dowel surrounded by shade A2 root dentin (shade A2; Figure 1). Each resin cylinder had a diameter of 10 mm and a length equal to that of the fiber dowel. Before testing specimens, the recorded peak light intensity emanating directly from the curing probe of the LED curing light (LEDition; Ivoclar Vivadent, Schaan, Liechtenstein), measured as a baseline using the radiometer’s 8-mm light-guide setting, was 637 mW/cm2, and total radiant energy was 30.88 J/cm2 in 40s. The apical end of the embedded dowel was placed on the detector of an ACCU-CALTM 50-LED radiometer (Dymax Corporation, Torrington, CT, USA), and the probe tip of a LEDition LED curing light was placed on the coronal end of the dowel (Figure 2). The light cure machine was activated for 40s, during which TLRE was measured with the radiometer. The direct light intensity of light cure machine was measured right before each specimen testing to ensure that it stays above 600 mW/cm2. The cylinders were then cut back progressively in 1-mm increments using a diamond disc saw (Tech-Cut; Allied High Tech Products Inc., Rancho Dominguez, CA USA), and TLRE through the length of the resin block was measured at each increment until dowel length reached 5 mm. The dowel diameter at the apical end of the block was also measured at each increment. TLRE was calculated based on the ratio of actual dowel diameter at the apical end to the 3 mm light guide diameter used in the detector setting, and these values were analyzed using hierarchical multiple linear regression (α = 0.001) with SPSS software (version 22.0; IBM Corporation, Armonk, NY, USA). Preliminary analyses were conducted to ensure that the assumptions of normality, linearity, multicollinearity, and homoscedasticity were not violated. Pearson correlation analyses were conducted as a part of the preliminary analyses. Hierarchical multiple linear regression was conducted to assess the ability of dowel diameter and length to predict TLRE through the dowel’s cross section at the apical end, after controlling for the effects of the dowel system. The dowel system, entered in step 1 of the analysis to control for its effect. Diameter and length were included in step 2 of the analysis. 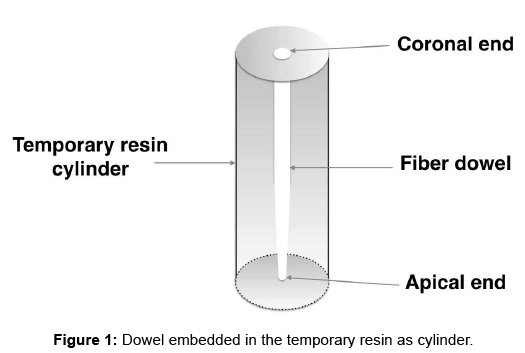 Figure 1: Dowel embedded in the temporary resin as cylinder. 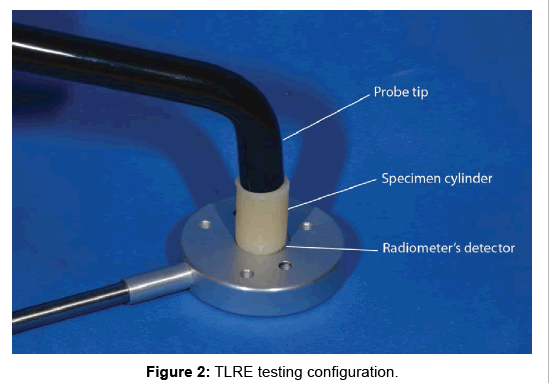 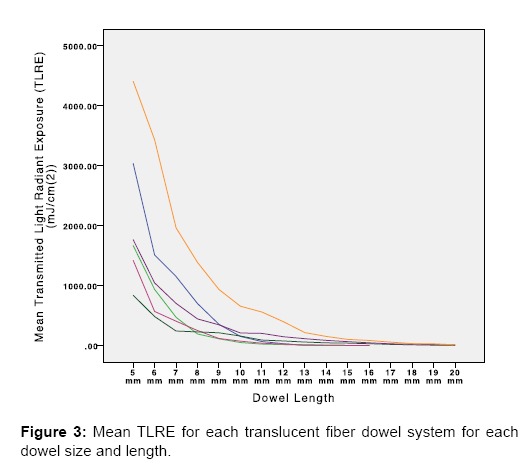 Figure 3: Mean TLRE for each translucent fiber dowel system for each dowel size and length.

The study hypothesis was rejected, as dowel diameter and length significantly predicted TLRE through the dowel’s cross section at the apical end. Previous researchers have suggested that these additives may influence light transmission because they are white and opaque [13]. These differences, however, did not contribute significantly to TLRE.

Radiant exposure was measured at the apical ends of the cross sections of embedded dowels of different lengths. TLRE depends on light intensity at a certain location and exposure time. The current study showed that the radiant exposure of light passing through a fiber dowel decreased with increased dowel length. Fibers extending from coronal to the apical end of a dowel allowed the transmission of some light, although 85-99% of radiant exposure (energy) was lost. These findings are consistent with reports of the efficacy and predictability of polymerization and degree of conversion of dual-cure cements at apical levels [10,24,25]. Light attenuation through a fiber dowel has been proposed to decrease the micro-hardness of resin cements [12].

Most dowel lengths embedded in root canals, after considering the recommended 4 to 5 mm apical seal with gutta percha, are 5-8 mm depending on original tooth lengths. As most dowels are cemented clinically at full length, rather than being cut to the desired length before cementation, one would question the role of light transmitted through their apical areas. The most important factor in the light curing procedure for fiber dowels may be the amount of light transmitted in the middle portion of the dowel, when operators use only the cement manufacturer’s recommended curing time. As a result, the degree of conversion of the cement around the embedded dowel depends on how well the cement cures chemically, for both light- and dual-cure systems. The direct effect of light curing on excess cement at the coronal opening of the root canal may also contribute to the curing of the cement.

Knowledge of the radiant exposure threshold at which a given resin cement system initiates and/or continues the polymerization process is essential. Values between 21-24 J/cm2 ensure homogenous polymerization [26]. Although these recommended values were obtained from the study of 1 to 3 mm thick composite resin restoration, the applicability of this range to thin film resin cements around the dowels is questionable. More studies on the homogeneity of resin cement polymerization in fine thicknesses are required. The regression equation obtained in this study can be used to estimate the required radiant exposure, and thus the amount of time required to ensure an adequate degree of conversion for all cement film around a fiber dowel.

Within the limitations of this study, we can conclude that:

• Dowel diameter and length can predict the TLRE at a translucent fiber dowel’s apical cross section, after controlling for the effects of the dowel system.

The compositional differences of the FK and PT dowel systems tested in this study did not contribute substantially to TLRE.