Laparoscopic sleeve gastrectomy (LSG) is the most common bariatric procedure performed worldwide [1]. Indeed, LSG is gaining popularity because it is technically less demanding, requires less operative time, and may be associated with fewer complications and metabolic deficiencies compared than other procedures [2]. Increasing experience with LSG shows that some patients will have a procedure failure because complications (i.e. reflux symptoms), weight regain or inadequate weight loss (IWL) [3]. Despite failure for weight regain must be evaluated at least after 5 years, IWL could be assessed in the first year after procedure [4].

There is no consensus on the definition of IWL. Several authors considered excess weight loss percentage (EWL%) the most practice parameter to evaluate IWL [3,5,6]. Although patients presented a great EWL heterogeneity, Reynaud criteria defined unsatisfactory results as EWL lower than 50% [7], and literature defined IWL as EWL<50% [8]. IWL (EWL<50%) could be depending on by preoperative [9] and/or postoperative [10] patient behaviour whether if LSG procedure was well performed and standardized. An attentive postoperative follow-up could prevent a negative eating behaviour and a preoperative assessment could be facilitating patient selection.

Despite the well-defined importance of preoperative diet was well defined in terms of preoperative weight loss and its benefit on perioperative bariatric surgical outcomes, its efficacy on postoperative EWL was is not clear [13-16].

The goal of this study was to identify predictive factors for IWL after LSG, with respect to preoperative anthropometric parameters and patient’s psychological and dietetic behaviour.

A retrospective review of a prospectively maintained database was performed. We included all consecutive laparoscopic sleeve gastrectomy (LSG) procedures performed between November 2014 and February 2017 at Bariatric Unit of San Michele Hospital.

All patients included in this study met the National Institutes of Health consensus criteria for bariatric surgery and the Italian guidelines for morbid obesity surgery and fulfilled the institutional guidelines of medically supervised weight loss and psychological clearance [17].

One board-certified surgeon (RM) considered to be experienced in laparoscopic bariatric surgery and one junior surgeon (GF) considered to be in learning process, performed all procedures. Signed informed consent was obtained from all patients.

All procedures were performed laparoscopically. Primary SG procedure and revisional cases were included in this study. SG as first step to another bariatric procedure and all definitive procedures were included. All procedures were performed in French position and all patients met perioperative recommendations as indicated by Italian guideline for morbid obesity [18]. Drainage was left three-days and nasogastric tube was removed one-day after the operation. Liquid alimentation was allowed two-days after operation if no-fistulas and no-stenosis was documented from gastric swallow and/or clinically. A complete clinical and laboratory follow-up 1,3,6,12 months after operation was performed as indicated by Italian guideline for morbidity obesity [18].

Data were recorded prospectively on specific excel sheet forms. All patients were consecutive and ranked according to the date of operation (case rank).

Binge eating disorder (BED) was defined as a compulsive overeating without possibility of excessive consumption of food ingest during a subject state of feeling both out of control and distressed without compensatory, purgatory behaviour [19].

Grazing was defined as an eating behaviour characterized by the repetitive eating of small/modest amounts of food in an unplanned manner and/or not in response to hunger/satiety sensation [20].

All patients were evaluated by at least two clinical evaluations performed by the same psychologist (CS).

Operative data - Operative time frames were defined as skin incision to skin closure. Nasogastric tube was 34 to 40 Fr. Intraoperative methylene blue test at the end of the procedure and upper gastrointestinal series at postoperative day 2 were systematically performed to detect gastric leak. Conversion to open or laparoscopy, transfusions and intraoperative complications were evaluated.

Postoperative data - Mortality rate was evaluated within a postoperative period of 60 days after the initial surgical procedure. Sixty days postoperative morbidity rate was also evaluated using Clavien-Dindo classification [21]. Total hospital and ICU length of stay, rehospitalisation data (with or without reoperation) within 60 days were also collected. Excess weight loss percentage (EWL%) at 1,3, 6 and 12 months after surgery was calculated.

Descriptive statistics for quantitative variables were expressed as a mean + SD or median (range) and for qualitative variables as percentages. Bivariate analyses - preoperative, operative and postoperative characteristics between groups were compared using the Pearson or Fisher’s exact test for categorical variables and the Student’s t test or Wilcoxon-Mann-Whitney test for continuous variables. Variables were considered significant at <0.05 level.

Eighty-one patients (95.3%) had a SG as an initial bariatric procedure and 4 patients (4.7%) had a previous gastric banding removed 3 months before SG. 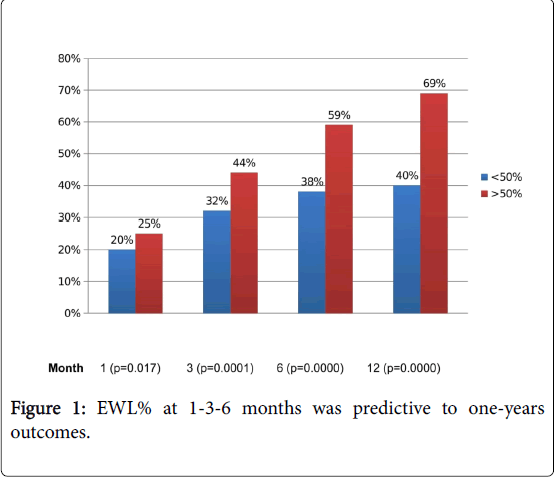 Figure 1: EWL% at 1-3-6 months was predictive to one-years outcomes.

BMI, eating disorder and preoperative weight loss had not impact on IWL. Junior surgeon and his learning process seemed to have no impact on IWL.

In multivariate model misbehaviour patients to preoperative diet patients was the only predictive factor for IWL (p=0.046).

Despite the small sample size of this retrospective study some useful information can be obtained also on the effect of the predictors on the probability of EWL >50%. The confidence intervals (CI) for the estimated coefficients of the multivariate logistic regression model fitted (Table 5) provide us clear clues on the direction of the effect (albeit statistically significant only for misbehavior to diet) of the predictors on the probability of an EWL >50%.

This study shows that BMI and age, eating disorders, and surgeon learning process did not impact on IWL whereas however, it reveals that bariatric patients with misbehaviours during preoperative diet were subject to have IWL one-year after procedure and this fact seemed to be independently by to preoperative weight loss. Moreover, patients with IWL at one-year could be detected at first month after procedure.

Higher BMI and age are frequently correlated to IWL [5,9,11,22] but these data are not confirmed by our study. Diabetes seems to have a positive correlation with IWL (p=0.034 in univariate analysis).

Psychological and socioeconomic behaviour has been already welldiscussed in literature [6,16,24,25]. To our knowledge, no data were available about grazing as predictor of IWL but consistent literature identified this disorder as a predictor of weight regains [20]. Data about binge eating disorder were quite divergent as negative predictor or not of IWL [25,26].

LSG is a well-standardized procedure and operative technique should not affect the postoperative EWL [27]. Our data confirmed that learning process in high volume bariatric centre did not impact on IWL; indeed junior surgeon performed 51.7% procedures without differences of IWL than senior surgeon.

Patient compliance to preoperative diet reflected patient’s postoperative dietary behaviour and could predict IWL. In this setting, a good patient behaviour during preoperative diet could be criteria to select patient for SG. Furthermore, an attentive follow-up could early detect IWL in order to increase dietetic and psychological surveillance of dietetic behaviour.

There is no conflict of interest between any authors of the manuscript.

Copyright: © 2017 Fantola G, et al. This is an open-access article distributed under the terms of the Creative Commons Attribution License, which permits unrestricted use, distribution, and reproduction in any medium, provided the original author and source are credited.