Prevalence and Contributing Factors of Childhood Physical Abuse in Households and at Schools among School Adolescents in Arba Minch Town, Southern Ethiopia

Prevalence and Contributing Factors of Childhood Physical Abuse in Households and at Schools among School Adolescents in Arba Minch Town, Southern Ethiopia

Copyright: © 2017 Unasho YS, et al. This is an open-access article distributed under the terms of the Creative Commons Attribution License, which permits unrestricted use, distribution, and reproduction in any medium, provided the original author and source are credited.

Background: Though millions of children around the world are the victims and witnesses of physical abuse, every child has the right to health and a life free from violence. Therefore the objective of this study was to assess Prevalence and Contributing Factors of Childhood Physical Abuse in Households and in schools among School adolescents, Arba Minch Town. Methods: Institution based cross sectional study design was employed from Jan 11 to Feb 11/2016. The sample size of 737 was selected through multi-stage sampling techniques. Data were collected through self-administered questionnaire and interview from 7th to 10th grade students and analyzed by SPSS (IBM 20). Descriptive statistics, bivariate and multiple variable analyses were done. Results: A total of 718 (97.4 %) school children were participated in the study. Among them, 462 (64%) students faced childhood physical abuse. Of these, 77.3% abused by parents and 58.4% abused by school community. Age, sex (AOR=2.439; 95% CI=1.370, 4.348), presence of domestic violence (AOR=8.929; 95% CI=4.292, 18.519) and where the child grown up (AOR=0.460; 95% CI=0.220, 0.940) were contributing factors for childhood physical abuse. Conclusions: Majority of children in Arba Minch town have experienced childhood physical abuse at household and school environment.

Child abuse or maltreatment is a state of physical, emotional, economic and sexual maltreatment mete out to a person below the age of eighteen and is a globally prevalent phenomenon. Physical abuse is the inflicting of physical injury upon a child. It is not by the acts, but the results of the acts (e.g., bruises, burns, broken bones) from many different acts, including hitting, kicking, slapping, shaking, burning, choking, throwing, whipping, and/or beating by other person including family members [1,2].

There are about 25-50% of children around the world who suffer from physical abuse [3]. All over the world children are subjected to violence as a punishment by family members or other adults including school teachers and other staff [4]. Those abused by their biological parents are about equally likely to have been abused by mothers as by fathers (51% and 54%, respectively), while those physically abused by non-biological parents or parents’ partners, or by other, perpetrators like teachers are much more likely to be abused by males (74% or more by males versus 26% or less by females)[5].

Since the perpetrators of the maltreatment are at the same times the source of nurture for the child, they are dependent on them and these children often do not tell anyone about the abuse they are experiencing. This is a major cause of maltreatment being silent, and which can have both short- and long-term impacts on their wellbeing [6]. This occurs right across society regardless of age, gender, race, sexuality, wealth and geography [7]. Childhood physical abuse is common event in different regions of the world and of which, girls report that 24% and 39% of them experiencing an intentional injury from their father and mother, respectively [8].

In East African, millions of children in the region continue to be victims of physical, sexual and emotional abuse in the home, at school or within their communities [10]. 74% of the child respondents in Addis Ababa had the experience of being pinched for punishment purposes and about 36% of respondents reported that they had the experiences of being whipped with ropes [11]. In Ethiopian violence against children exists in all regions. Parents thought that beating children and shouting at them sends a clearer message than would advising them and discussing the problem [12].

Since only few related studies conducted in the country and there are no studies on the same topic in the study area, this study was designed to identify the prevalence and contributing factors for childhood physical abuse in the households and schools among school adolescents in Arba Minch Town, Southern Ethiopia.

Study area and period: Arba Minch town which is the capital town of Gamo Gofa Zone is located at 505 km from Addis Ababa and 275 km from regional town, Hawassa. The town covers 514 sqkm and generally located at the altitude of 1200 through 1400 meters above sea level. Based on the 2007 Ethiopian national population and housing census, the population of the town is projected to be about 86,405. Since last July 2014, with male to female ratio of being 0.963. Administratively the town is divided in to four sub cities. There is one Zonal hospital, two health centers, and different level of private health facilities. In the town there is one University, three regional government colleges, eight private colleges, and five high schools of which two preparatory schools. There are three junior secondary and high schools (grade 7-10), namely: Chamo junior, Abaya, and Limat and two high schools. Three private junior secondary and high schools (grade 7 to 10) include Hibret Lelimat, Rehobot and community school. The study population was selected from junior secondary and high schools. The study was conducted from January 11 to February 11, 2016.

Study population: All school children of aged 13-18 years in selected junior secondary & high schools and enrolled in the academic year of 2015/2016 in Arba Minch town.

Sample size and sampling techniques: sample size was calculated using single population proportion formula with assumption of p=50%, with 95% confidence level and 5% level of precision. So, a total of 384 were calculated then by multiplying with design effect of 2 it becomes 768. Since the number of school children in five schools was less than 10,000, we used correction formula. Hence the sample size becomes 670. And finally by adding 10% non-response rate, the final sample size was 737.

To draw the sample, multi-stage sampling technique was used. Three schools from five public schools and two schools from three private schools were selected by simple random sampling. Then consultation with each school administration was made to obtain details information of grades and number of sections for each grade to determine participant sections of grades. Most update records of each school were used as a sampling frame and study subjects were selected from each grade by simple random sampling (Figure 1). Data collection instrument and procedures: Data were collected using a pre-tested structured questionnaire adapted from literatures [1,13]. It was in English, translated to Amharic and then back to English to check for consistency, and completeness. Then it was collected through a face-to- face interview for junior secondary school students and self-administered for high school students.

Data processing and analysis: After checking for completeness and consistency, data was entered, coded and cleaned in to EPI info version 7.1.0 and exported to SPSS (IBM 20) for descriptive and inferential analysis. Binary logistic regression was used to predict a dependent variable on the basis of continuous and/or categorical independent variables and predictors with P-value <0.25 were candidates for multivariate analysis and factors with p<0.05 were statistically significant. The degrees of association between dependent and independent variables were assessed using AOR at 95% CI.

Ethical considerations: Ethical clearance was obtained from ethical review committee of Arba Minch College of Health Sciences. Zonal and Town administrative of Gamo Gofa Zone were communicated for support letters and administration of selected schools was communicated for administrative support and facilitation of data collection. Before enrolling any of eligible study participants, informed written and verbal consents were taken from students and their parents/guardians. Confidentiality was maintained at all levels of the study by using codes which is only known by the respondents. 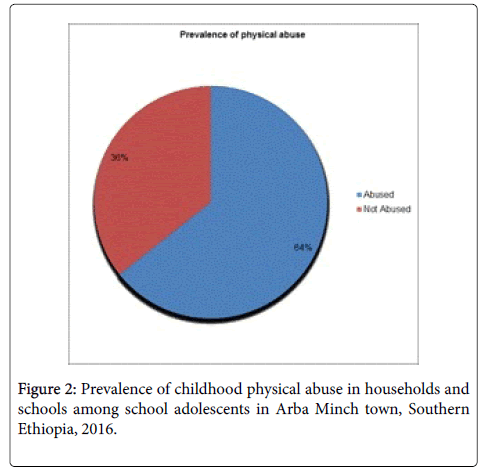 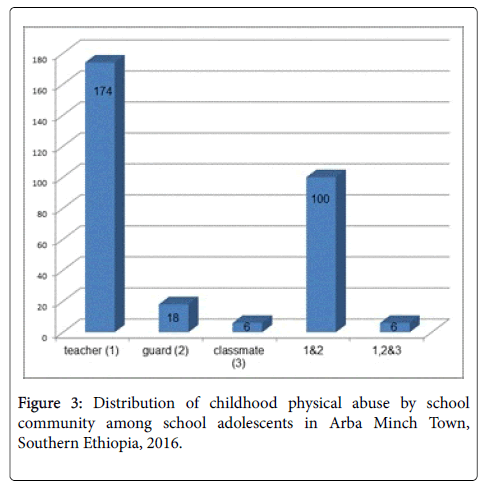 Reasons given for physical abuse in households and at schools

672 (93.6%) of study participants mentioned that the cause of physical abuse was disobedience to parents and refusing to go to school or coming late. 357 (49.7%) students believe the importance of physical abuse as discipline measure while others denied it and rather expressed it as can exacerbate.

Factors associated with childhood physical abuse in household and at school

This study assessed the prevalence and contributing factors of childhood physical abuse in household and school among school adolescents in Arba Minch town, Southern Ethiopia.

In this study the number of children who were abused by parents was 77.3%. This finding is higher than the finding of the study conducted in India where 59% of students were abused by family [1]. This might be because of the difference in sample size and participant characteristics between our study and Indian study: while Indian study covers nationwide our study is only restricted to specific area.

Similarly, in our study the number of children abused by school community was 58.4%. This finding is higher than the finding of the study done among secondary school students in Ilorin Town, Nigeria where the abuse in school was 47.5% [6]. This difference might be because of cross-cultural variation in the prevalence of physical abuse between the two towns.

In this study child hood physical abuse is more prevalent among lower aged children than their counter part. While 85.6% of children aged 13 to 14 faced physical abuse, only 35.6% of aged 15-16 and 21.4% of aged 17-18 faced physical abuse. This finding is similar with the finding of the study conducted in Southern China where those who aged 14 years or below were about 1.52 times more likely to have experienced physical maltreatment [8].

In our study children who lived in house of domestic violence faced more childhood physical abuse than their counter part. This finding is in line with the finding of the study conducted in hospital settings where children suspected of being maltreated have reported that between 45% and 59% of their mothers showed evidence of being battered by their partners [15].

Our study also revealed that the occurrence of childhood physical abuse is strongly related with where the child grown up. While 76.7% children from rural areas faced child hood physical abuse, 61.6% of children in urban faced it.

This finding is consistent with the finding of the study conducted in Albania where rural residence was strongly positively associated students' experience of violence [16]. This probably is due to children in the rural setting exposed early to different responsibilities and duties that lead them to different trials and errors and in response parents abuse them physically.

We are very thankful to Arba Minch College of Health Sciences, Research and Publication Core Process for providing us this chance to conduct the Research. We also like to give our deepest gratitude for Gamo Gofa Zone education office for providing as baseline information. Lastly our thanks go to data collectors and all research participants who took part in the study.