Acute Respiratory Infection (ARI) is the leading cause of death among children below five years of age [1]. On the average, under-5 children suffer about 6-8 episodes of ARI per child per year, thus accounting for an estimated 238 million attacks and 13 million deaths every year, globally [2-4]. Acute Respiratory Infections are caused by a wide range of pathogens, predominantly viruses and bacteria. Risk factors for this disease include prematurity, low birth weight, lack of exclusive breastfeeding, malnutrition, overcrowding, indoor air pollution, lack of immunization against common childhood diseases, etc. [5-7]. Most children with ARI have mild to moderate disease and are treated as outpatients with full recovery. However, severe forms of the disease such as Pneumonia require hospitalization and prompt treatment. Acute Respiratory Infection poses a significant economic burden on healthcare systems and individual families based on the direct and indirect costs of diagnosis and treatment. Epidemiological studies have shown different estimates of the burden of respiratory diseases in different countries. In the US, respiratory diseases in children are responsible for 25% of hospital admissions [8,9] while in the United Kingdom and continental Europe respiratory diseases contribute to 25% and 13% of hospital admissions among the pediatric age groups respectively. In developing countries, 30% of all patient consultation and 25% of all pediatric admissions are due to ARI [10-13]. Added to the direct costs of treatment are indirect costs due to lost school days and lost productivity and wages of parents whose children develop severe complications of ARI. More so, recurrent episodes of ARI among under five children further impacts on the emotional state of care givers. Seasonal variations have a profound effect on the prevalence of acute respiratory infections. There is marked seasonal variation in viral aetiology of ARI, noted to be higher during the colder months in countries with temperate climate [14-16]. In countries with tropical climates, the seasonality is variable, based on the temperature-dependent local pattern, humidity or rainfall [17-21]. The peculiar climatic condition in Southern Nigeria, characterized by prolonged wet (March to October) and short dry (November to February) seasons predisposes it to an increased frequency of ARI, especially among children under five years of age. Oil exploration activities carried out both legally and illegally impacts negatively on the environment and may be implicated in the current spate of Black Soot in Port Harcourt with particulate matter literarily falling out of the atmosphere. This alarming degree of air pollution was noted from September 2016 and has continued till recent times. The net effect of these activities is environmental pollution predominantly from gas flares and oil spillage. Gas flares contributes to climate change with the release of a variety of poisonous chemicals into the atmosphere. This also results in outdoor air pollution which is a risk factor in the development of acute respiratory illnesses among underfives. Research is therefore needed to determine the prevalence of ARI among the most vulnerable group in our society, in order to compare with non-oil producing regions thereby determining the effect of oil exploration activities on child health [22,23]. Hence, this study seeks to answer the following research questions: What is the prevalence of ARI among under five children between March 2015 and February 2017 in BMSH? What is the seasonal distribution of ARI among under five children between March 2015 and February 2017 in BMSH? What is the monthly and quarterly trend of ARI among under-five children over the two year period between March 2015 and February 2017 in Braithwaite Memorial Specialist Hospital? This study period coincides with the period before and during the increasing spate of air pollution (Black Soot) in the commercial city of Port Harcourt [24,25].

The study was a descriptive retrospective study using hospital records of children under five years of age seen at BMSH between March 2015 and February 2017.

The study was carried out in Braithwaite Memorial Specialist Hospital in Port Harcourt metropolis. Port Harcourt, the capital of Rivers State harbors many oil producing companies, major Federal and State institutions and government and private-owned industries [25,26]. Rivers State is located in the South-South geopolitical zone of Nigeria. There is abundant rainfall all year round with a mean annual rainfall of 370 mm and a mean annual temperature of 27°C. Braithwaite Memorial Specialist Hospital is one of the two tertiary hospitals in Rivers State. It is located in Old GRA, Port Harcourt. It is operated by the Rivers State Hospital Management Board. It was established in 1925 and originally served as a medical facility for senior civil servants. It later became a General Hospital and has since gained the status as a Specialist Health Institution. BMSH is ranked among the largest hospitals in the Niger Delta [27-29].

Data was collated and analyzed by the investigator using the SPSS statistical software. Collated data was expressed using simple percentages, proportions and frequencies. Tests of significance (chi square and t-test) was conducted between proportions and means as appropriate. Confidence interval was set at 95% and a p value of less than 0.05 will be considered significant The sampled population was divided into sub-groups based on their age (children <24 months and children 25 to 60 months) and sex (male and female) and comparisons made between the prevalence rates of acute respiratory infections in wet and dry seasons. Tables, charts and graphs were used to express these relations [10,32].

Table 1: Monthly and Annual Distribution of study subjects and Prevalence of ARI Cases.

Table 5: Relationship between Age and Class of ARI 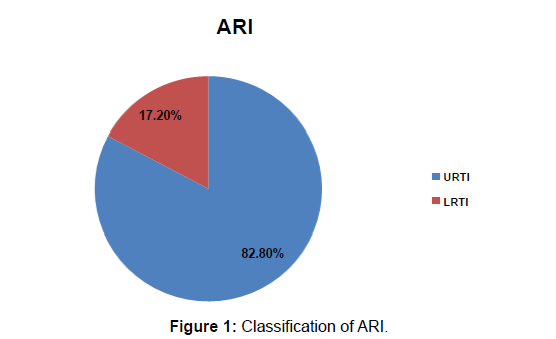 The prevalence of ARI obtained in this study for the period between March 2015 and February 2016 was 20.0% and that between March 2016 and February 2017 was 19.3%. This is similar to the 22.0% prevalence rate reported among under five children in Ahmedabad district, Gujarat, India. The fact that both countries are highly populated developing nations and share similar socioeconomic constraints with poor health care delivery systems may account for this similarity. In consonance with these studies, a higher prevalence of 52.4% was obtained in another study done in Chidambaram, India, a city with similar tropical climate and an average annual temperature and rainfall of 28.4°C and 1248mm which is comparable with that in Port Harcourt (26.4°C and 1950.7mm respectively) [49-53]. The prevalence rates of ARI obtained in this study contrasts with the prevalence of 4.35% reported in a study carried out in Jos, Nigeria. This disparity may be due to the difference in climatic conditions as Jos features very short rainy season and longer dry season. Moreover, the fact that subjects in that study were recruited only from the emergency room may account for the difference as this may not give a true picture of the prevalence of ARI since majority of such cases present in out-patient clinics. In this study, children aged ≤ 12 months constituted the highest proportion of ARI (50.1%), followed by 13-24 months (24.4%). Similar findings were obtained in the study carried out in Jos where a higher proportion of infants had ARI when compared with the older age group. In contrast, a study done in Enugu, Southeastern Nigeria reported that the age group mostly affected was 10- 19 months [54-57]. Another study done in Egypt revealed that ARI was more prevalent among children aged 6-23 months. According to Ekram and coworkers (2016), this age group is the period of introduction of complementary feeding, reduced breastfeeding and waning maternal immunity, hence the increase in ARIs [58-62]. The findings in this study of a higher proportion of males with ARI (55.4%) compared to females (44.6%), though not statistically significant, compares favorably with other studies done in Southern, Southeastern and Northern Nigeria. Similar findings were also observed in studies carried out in Iraq and India. In the former study, males were reported to be 1.5 times more likely to have ARI than females. However, another study carried out in Australia noted a higher prevalence in females [63-67].

Seasonal distribution and trend of ari

In this study, the prevalence of URTI and LRTI was significantly higher during the wet (March to October) than dry (November to February) seasons. The months with the highest number of ARI cases were February, June and July accounting for 287 (13.0%), 220 (10.0%) and 230 (10.4%) cases respectively [68-71]. These months were followed by October and March constituting 209 (9.5%) and 194 (8.8%) cases respectively. This is not surprising as Port Harcourt features lengthy and heavy rainy season and very short dry season. The average monthly rainfall ranges between 20.7 and 434.0mm, with an annual level of more than 3000mm. Only the months of December and January truly qualifies as dry season in Port Harcourt. Findings in this corroborates with another study carried out in Southern Nigeria where 373 (10.7%) ARI cases were seen in the month of July, the peak of the rainy season. Similar findings were also obtained in a study done in Northern Nigeria which noted that the peak period of acute LRTI hospitalization was between the month of May and October, the peak of the rainy season during which 86% of admissions occurred ARI. In contrast, studies conducted in Vietnam and Greenland noted that there was no clear seasonal variation in the overall incidence of. In the latter study, there was no seasonal variation in the incidence of respiratory symptoms, clinically verified episodes of URTI or LRTI and episodes necessitating contact with the health center. This was attributed to the pattern of indoor stay of children under five years of age, but could also reflect the varying and opposing patterns of various infectious agents [72-76].

Findings in this study though not statistically significant, revealed an increase in the prevalence of ARI cases among under five children between September and December 2016 (7.4%, 11.2%, 9.7% and 7.3%) when compared to the same months in the year 2015 (5.2%, 7.8%, 7.6%, and 5.7%). The latter period coincides with the emergence of Black Soot in Port Harcourt. This may account for the increased number of ARI cases among under five children at BMSH, Port Harcourt [77-81].

The study showed that the prevalence of ARI among under five children in Braithwaite Memorial Specialist Hospital for two consecutive years (March to February 2015/2016 and 2016/2017) is high at 20.0% and 19.3% respectively. Children aged 24-60 months had a significantly higher prevalence of URTI when compared with those aged <24 months. The reverse was the case for LRTI. There was no statistically significant difference in the prevalence of ARI among males and females. In determining the seasonal distribution of ARI cases, the prevalence of URTI and LRTI was significantly higher during the wet than dry seasons. ARI cases were more prevalent during the months of February, July, June, October and March, the peak of the rainy season in Port Harcourt. This study also noted an increase in the prevalence of ARI cases between September and December 2016 when compared to the same months in the year 2015. The latter period coincides with the emergence of Black Soot in Port Harcourt. However, the difference was not statistically significant.

Based on the conclusion from this study, the following recommendations are made:

1. Advocacy, community participation and proper funding of ARI prevention and control programs by the government and stakeholders in Rivers state.

2. Improved health care planning/funding by authorities for prompt and effective management of acute respiratory infections especially during the wet season.

3. Unrelenting efforts by heath workers and other stakeholders in the promotion of breast feeding programs to reduce the prevalence of acute LRTI in infancy.

4. Concerted efforts by all stakeholders to militate against air pollution in Rivers state with the aim of proffering a lasting solution to the menace of Black Soot in Port Harcourt.

1. Further studies to determine the etiologic agents of ARI in the locality.

2. Further studies to determine the risk factors for ARI in the locality.

3. Further studies to determine the short and long term effects of air pollution on the most vulnerable group in our society- our little children.

Copyright: © 2018 Fienemika AE, et al. This is an open-access article distributed under the terms of the Creative Commons Attribution License, which permits unrestricted use, distribution, and reproduction in any medium, provided the original author and source are credited.