Prevalence of Alexithymia among Undergraduates at BUITEMS

Alexithymia is a disorder or an inability of a person to express his or her feelings and emotions. It is the decreased capacity to comprehend feelings or sentiments in the self as well as of others. The current epidemiological investigations demonstrate that upwards of 10% of the overall public might be portrayed by stages of alexithymia that are sufficiently high to succeed as uncontrolled. Alexithymia is related to a variety of somatic and mental health problems including depression and anxiety, somatic complaints, hypertension, panic disorder, eating disorders, inflammatory bowel disease etc. Our results suggested that occurrence of alexithymia is more prevalent among males than females. Along these lines it is basic to report this issue among undergraduates since it may have aggravating impacts later on.

The term alexithymia originated from the Greek, a=without, lexi=word, thymos=emotion. Alexithymia is a disorder or an inability of a person to express his or her feelings and emotions. It is the decreased capacity to comprehend feelings or sentiments in the self as well as of others [1]. The idea of alexithymia began to depict sufferer without the words for sentiments or feelings. It ought to be noticed that examination recommends, that alexithymic individuals frequently demonstrate an inadequacy in compassion and improper influence dependant on the circumstance, maybe because of their failure to peruse feeling in other individuals or circumstances [2]. The notable highlights of the worldview are: 1) trouble in recognizing and depicting subjective sentiments; 2) trouble in recognizing emotions and the real vibes of passionate excitement; 3) choked imaginal limits, as prove by a scarcity of dreams; and 4) a tenuously prescribed psychological style [3]. The current epidemiological investigations demonstrate that upwards of 10% of the overall public might be portrayed by stages of alexithymia that are sufficiently high to succeed as uncontrolled [4]. Pennebaker trusts that declaration of feeling all in all has constructive outcome and concealment of feeling negatively affects wellbeing. He expressed that the nonverbal articulation of feelings is connected with an unexpected lessening in autonomic sensory system (ANS) action [5]. According to a current hypothetical proposition, the highlights including the alexithymia build reflect shortfalls in the intellectual handling and direction of feelings. Alexithymia patients can't recognize precisely their own particular subjective sentiments, not exclusively are people with high degrees of alexithymia restricted in their capacity to think about and direct their feelings, however they additionally verbally convey enthusiastic trouble to other individuals ineffectively [6]. The contracted imaginal limits of high alexithymia people restrain the degree to which they can balance feelings by dream, dreams, interests, and play [7]. The emotional reacting and feeling control in people include 3 interrelated frameworks neurophysiological (to a great extent autonomic sensory system and neuroendocrine enactment), engine expressive (for instance, outward appearances, changes in stance, and manner of speaking), and intellectual experiential (subjective mindfulness and verbal detailing of feeling states) [8]. The direction of feelings includes common cooperation’s among these 3 frameworks; furthermore, a person's social associations give relational feeling control that might be strong or troublesome [9-12]. Other than social communications (dialect, dreams, fantasy, play, crying, grinning, and sense of self guard instruments) all assume a part in feelings regulation [13]. Alexithymia has been additionally connected to passionate discernment by contemplates relating it to deficiencies in the psychological experiential component of enthusiastic reaction and relational direction of feeling. This could prompt the issues that those with alexithymia have in recognizable proof of feeling because of failure to partake in feeling and a powerlessness to legitimately classify feeling [14]. The insufficiencies central alexithymia have been credited, in any occasion to some degree, to a catch in impact progression in the midst of early puberty [15]. Alexithymia has also been linked with many other disturbing difficulties which includes anhedonia (reduced capacity for positive emotional experiences, prevalence of and proneness towards negative emotions .it ought to be well-thought-out as a hazard element for those therapeutic, mental, or social issues that are impacted by disarranged influence control [16]. Social, linguistic, and neuroscience explore on alexithymia appear to have advanced to a point where they might be converted into successful treatments for alexithymic people. These treatments might be conveyed in imaginative arrangements, for example, Internet-based projects. These treatments might be conveyed in inventive configurations, for example, Internet-based projects. These projects may be particularly engaging alexithymic people, in light of the fact that online correspondence gives an approach to keep relational contact at the very least, bringing down the requirement for straight forwardly sharing one's feelings [17,18]. The purpose of this study was to find the prevalence of alexithymia and it’s associated contributing factors.

Male and female participants were selected at random from different departments with their informed consent. Sample size was kept 100. This study was conducted among the students studying at BUITEMS, Quetta, Pakistan. This analytical study was conducted with the help of a clinically recognized scale TAS-20 [19].

• Equal to or less than 51=non-alexithymia

• Equal to or greater than 61=alexithymia

• Scores of 52 to 60=possible alexithymia 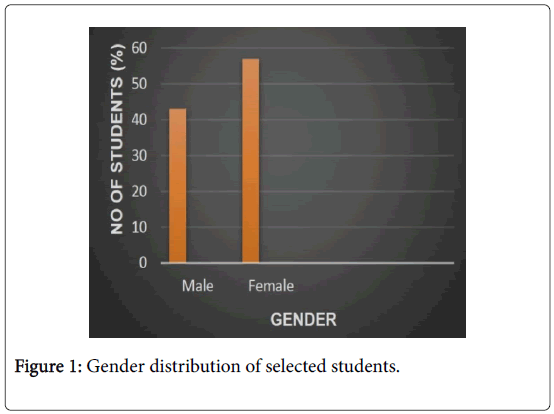 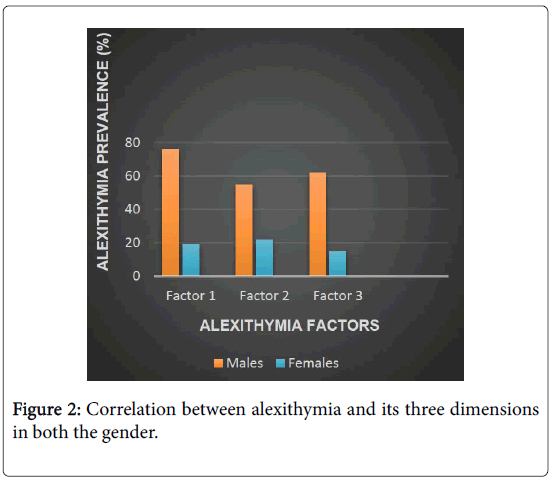 Figure 2: Correlation between alexithymia and its three dimensions in both the gender. 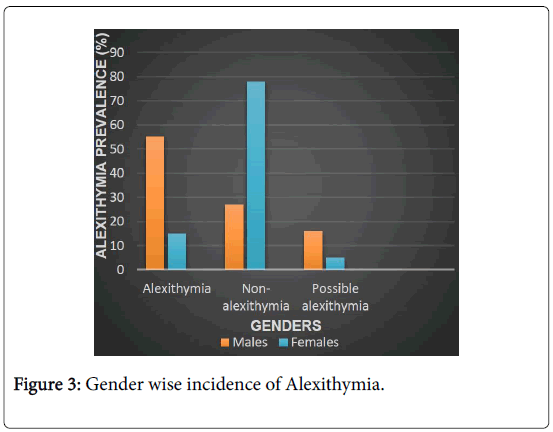 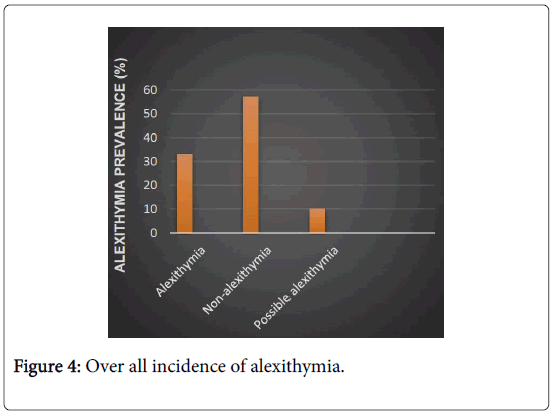 Figure 4: Over all incidence of alexithymia.

Our study revealed that the overall incidence of alexithymia is low among the studied participants. Out of 100 participants 33% were alexithymic, 57% were non-alexithymic and 10% were on the border line that they might have alexithymia keeping in mind that our sample consisted of 43% males and 57% females as indicated in Graph 4 and Graph 1 respectively. Obtained results depicted that alexithymia is more common in males than in females as indicated in Graph 3 that 55% of males had alexithymia while only 15% females were reported alexithymic supporting the fact that the prevalence of alexithymia is much higher among males than in females based on literature review. Similar results were reported by Marielle Leo and his colleagues in their study [20]. High prevalence of alexithymia in males is probably due to two main reasons. Firstly due to socialized pattern of “restrictive emotionality” influenced by traditional masculinity ideology that was perceived in men [21]. The view that socialization assumes a part in the advancement of confined emotionality goes up against the regular view in our general public that young men and men are basically less sensitive and not so much passionate but rather more sensible than are young girls and ladies [22]. The second reason is that the neuroglia of males are different from females in terms of structure and function. Therefore alexithymia functions differently in the brain of men and woman. For men alexithymia is related with a specific pattern of neurotransmitter action [23]. Research revealed that deficit in right hemispheric capacity contribute to alexithymia in men, but not in case of women [24]. Higher incidence of alexithymia factors was seen among men than women due to their “restrictive emotionality”. The men that restrict their emotions showed greatest deficits in identifying and expressing emotions and feelings. Men are truly unconscious of their emotions. Without this passionate awareness, when they made a request to distinguish their sentiments they tend to depend on their perception to try to plausibly deduce how they should feel [25]. Based on our findings, there is a need for a counselor or a psychiatrist to suspect alexithymia in undergraduates at BUITEMS to identify this problem at its initial phases.

Alexithymia is recognized as psychosomatic disorder which is linked with many physiological and psychological problems. It is important to report this problem because it might have troubling effects on the on the personality of an individual.